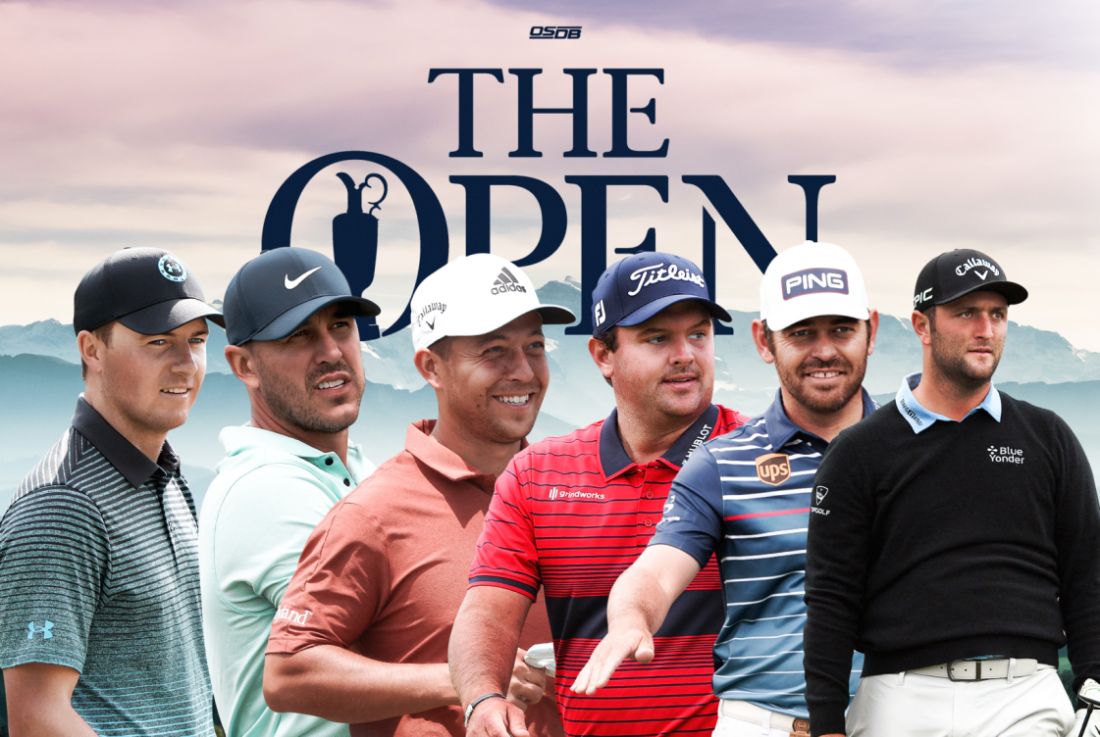 It feels like just yesterday that Hideki Matsuyama kicked off major season with a historic win at Augusta. Phil Mickelson then made history as the oldest major champion at the PGA Championship. And last month, Jon Rahm captured his first major title at the US Open in dramatic fashion.

And now here we are, with the final major of the year upon us: the Open Championship. This one feels different.

After the Open was canceled for the first time since World War II due to the COVID-19 pandemic last year, its return to the golf circuit this week has fans more excited than ever. It’s good to have this championship back on the calendar, with bone dry fairways, pot bunkers and blistering winds challenging the best golfers in the world as they pursue the title of “champion golfer of the year.”

Though there were some late withdrawals by Bubba Watson, Matsuyama and Zach Johnson, this field is loaded. And we’re looking at the top 20 players set to tee it up at Royal St. George’s in England starting Thursday.

Hatton has been hot-and-cold in the Open during his career, missing the cut three times from 2013-2015 before finishing T5 in 2016 and T6 in 2019. He’s extremely comfortable playing links golf, of course, and is coming off a T18 showing at the Scottish Open last week. He could be in contention this week.

Niemann has only played in the Open once and missed the cut in 2019. He doesn’t have a finish better than T23 in any majors, which is a concern. However, he knows how to flight the ball down and play in windy conditions. In his last start, he finished T2 at the Rocket Mortgage Classic.

Outside of missing the cut at the RBC Heritage, Casey has finished no worse than T26 since February and has eight top-10s. He came close at the PGA Championship and U.S. Open with T4 and T7 finishes, respectively, and he’ll try to make it three straight top-10s in the majors. He’s steady and strikes the ball extremely well, which is critical in links golf.

Fleetwood has been inconsistent all year, with just two top-10s and four missed cuts. He hasn’t finished in the top 10 since the Arnold Palmer Invitational in March but he’s shown some promise with a T17 at the Irish Open and T26 at the Scottish Open last week. He’s in full links mode and could finally break through in a style of play he enjoys. He tied for 12th in 2018 and tied for second in 2019 in this championship.

DeChambeau has made the cut once in three Open appearances, though the new Bryson 2.0 hasn’t yet played this championship after it was canceled last year. Links golf doesn’t fit his bombs away style, which is why he’s lower in these rankings. But if the conditions are fair and he can flight the ball high as he usually does, he could contend. His recent form isn’t great, though, with no top-10s since May.

In 25 appearances at the Open, Westwood has made the cut 19 times, has six top-10s and five top-five finishes. He isn't as hot as he was in March when he finished second in back-to-back weeks, but he was contending at the Scottish Open through two rounds last week. Few players have more experience playing links golf than Westwood.

The best ball striker in the world won’t have his usual edge this week because he had never played links golf before playing in the Scottish Open where he finished T71. But he knows how to stay in the mix in majors, with three top-18 finishes in majors this year, including a T4 showing at the US Open. Hopefully last week prepared him for what he’s about to experience at Royal St. George’s.

Johnson’s last start came at the Travelers Championship on June 24, where he failed to defend his title with a T25 finish. He uncharacteristically missed the cut at the Masters and PGA Championship before coming in 19th at the US Open, so his form in majors hasn’t been great. But he has five top-25s in 11 starts at the Open and nine made cuts. He’s always a threat in majors no matter how he’s playing going into the week.

Thomas hits the ball as high as anyone, but that won’t do him much good in the wind this week. He’s missed the cut in the Open Championship twice, though he did tie for 11th in 2019. After six underwhelming starts following his Players Championship win, he tied for 19th at the US Open and eighth at the Scottish Open last week, which will hopefully give him some confidence.

Ignore the fact that Finau has missed the cut in his last two starts. Well, don’t actually, but this is a player who’s almost always in the mix on major weekends. He tied for 10th at Augusta and eighth in the PGA, continuing his hot streak in majors before missing the cut at the US Open. He’s never missed the cut in four Open appearances and has two top-10s. He knows how to drive the ball low and keep it out of the wind, too.

Before missing the cut in this championship in 2019, McIlroy went T2, T4, T5 in his last four starts. He’s more than comfortable playing links-style golf and is a four-time major champion. So why is he not higher? Because he finished T59 in the Irish Open, missed the cut at the Scottish Open and only has one top-10 in his last five starts since winning the Wells Fargo Championship. He’s not in the best form and has mostly struggled in majors lately.

Fitzpatrick lost in a playoff at the Scottish Open last week, playing brilliantly and consistent with two rounds of 66 and two of 67. He can be up and down at times, as evidenced by his recent starts (T2, T55, T10, MC, T23, MC), but he’s putting it together heading into Open week. He has missed the cut twice in five trips to the Open Championship and has just one top-25. He’s contended in majors before but this could be his best chance to claim a title yet.

This will only be Cantlay’s third start in the British Open, going T12 and T41 in his first two appearances. He’s had an excellent season with two wins and five top-10s, though his four straight missed cuts from March to May were quite the blemish. In his last three starts, he has a win, a T15 at the US Open and a T13 at the Travelers Championship. He has the all-around game to contend this week.

Hovland bounced back nicely from his WD (it would’ve been a missed cut) at the US Open by winning the BMW International Open in Germany. He didn’t play in the Irish or Scottish Open, but Hovland has played really well with eight top-10s and 17 made cuts in 19 starts. This will be his first appearance in the Open Championship, though, which has to be taken into consideration. His ball striking is strong and he’s improved around the greens, making him a threat this week.

Spieth has been masterful in the Masters. He’s been almost as good in the Open. In seven starts, he’s never missed the cut and has four top-25s with three top-10s and his win in 2017, of course. Finally, back on track after a couple of down years, Spieth should be near the top of the leaderboard come Sunday, as he was in his last three starts. He’s been so consistent all year and there’s no reason to believe he can't contend at Royal St. George’s

In six trips to the Open Championship, Koepka has made the cut five times and finished in the top-10 three times, including a T4 two years ago. His last six starts this season have been a mixed bag, with two T2s, a T4 and a T5, as well as three missed cuts. With the knee injury getting better, he should be in great shape and form this week. And with it being a major week, he’s going to have his mind on one thing and one thing only: winning. This is the type of tournament he locks in for.

Schauffele has two top-25s and one top-10 in three Open Championship appearances. Few players have performed as well as he has in majors the last four years despite him being without a win. He played well at the Scottish Open last week, too, finishing tied for 10th with three sub-70 rounds. When it comes to safe picks in majors, it doesn’t get much better or consistent than Schauffele.

Reed is a wizard around the greens, showing the ability to pull off any type of shot. That will be critical this week, making Reed a perfect pick to potentially claim his second major championship. In his last five starts at the Open Championship, he has a top-10, three top-20s and one missed cut. His low, penetrating ball flight will come in handy if (when) the winds pick up.

Oosthuizen has a major championship thanks to his 2010 Open win, but what might be more impressive is that he’s finished second six times in majors, with a third-place finish mixed in, too. In his last four major starts, he’s finished in the top three times, including the last two. Smooth-swinging Louis has five top-10s in 15 starts this season, with three of them coming in his last five events. It’s hard to bet against the 38-year-old major champion, given his recent form and success in the majors.

Will Rahm go back-to-back in the majors after winning the US Open a month ago? Absolutely, without question. In fact, he’s the favorite to win, and deservingly so. He played well at the Scottish Open last week, too, being in contention right until the last couple of holes. He’s playing the best golf of his life right now and should’ve won the Memorial Tournament, too, if not for a positive COVID-19 test. Don’t bet against the No. 1 player in the world.