By Dylan Butler | Posted 26 days ago 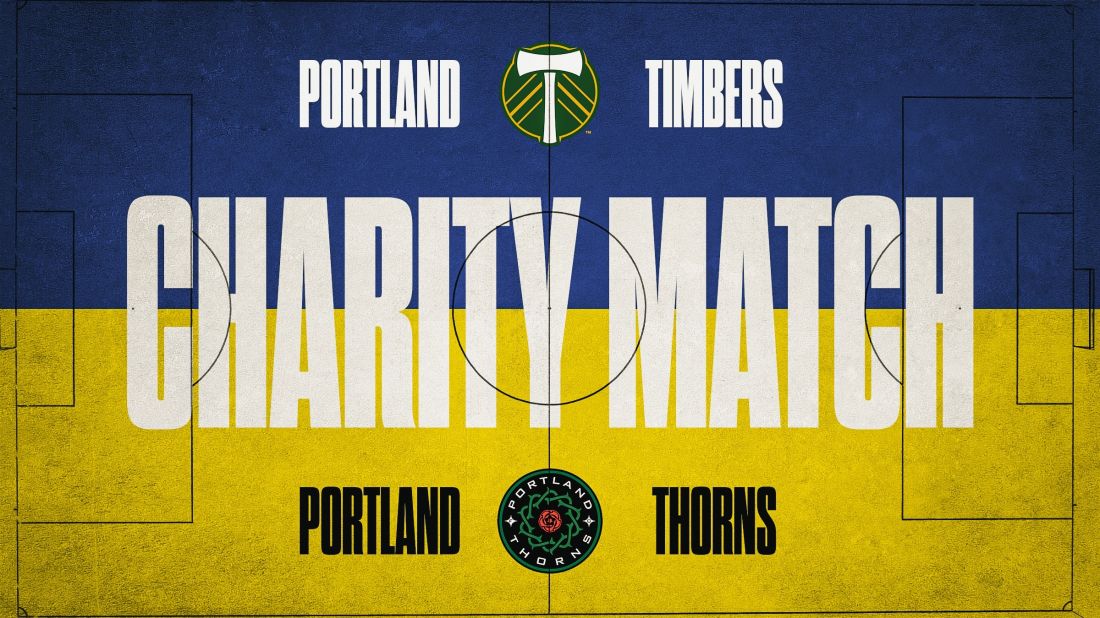 It was historic and meaningful, a showcase of the power of sports.

On Wednesday, the Portland Timbers of MLS and the Portland Thorns of the NWSL joined forces for a mixed-squad charity pickup game at Providence Park called the PTFC for Peace match.

The charity raised more than $500,000 in donations, including the $100,00 contribution from the clubs for UNICEF's humanitarian response to the war in Ukraine.

The money raised aids in the relief effort of families in Ukraine affected by the war. Additional donations can be made at www.unicefusa.org/PTFC until May 5. An auction with game-worn shirts from the event and other items, including Ukrainian corner flags and the game ball, is also open until May 5 at www.PTFCgivesmart.com.

“I had the real privilege to meet with both the Thorns and Timbers in their locker rooms and talk to them a little about the work that UNICEF is doing and why this is so important,” Nyenhius said before the match. “They are so excited to be a part of this and to use what they can do best, which is to put on a great entertaining soccer match to draw this attention. We’re so grateful for them. They can do many other things. They don’t have to do this, it’s not in their contracts, but they’re coming out to do it because they care and we’re really grateful for that.”

The sides — Team Blue and Team Yellow —  were split between Timbers and Thorns players. Diego Chara of the Timbers and Thorns’ standout Kelli Hubly selected for Team Blue and legend Christine Sinclair and Sebastian Blanco, who played for Metalist Kharkiv in Ukraine for three years from 2011-2014, picking Team Yellow for the 60-minute match in a draft held the week prior.

“This is a wonderful event for a wonderful cause,” Sinclair said. “Just proud of this organization, proud of this city for showing up and It was a lot of fun out there on the field. Hopefully we raised a ton of money and we can help change some lives.”

Sergii Demianchuk, the only Ukrainian referee in the Professional Referee Organization, which assigns officials for both leagues, was the referee, while Ukrainian-American singer Darka Dusty Stebivka sung the Ukrainian national anthem before the match.

Demianchuk moved to the United States in 2013 and started a family. His plan was to return home so his parents could meet their grandchildren. But that was initially delayed by the COVID-19 global pandemic and now the war in Ukraine.

“When I got the opportunity from the Professional Referee Organization, it was not even hesitating. It is my duty,” Demianchuk said. “Because I’m staying thousands of miles away from my people, my parents, my friends. If I can do something to help them, it’s a pleasure for me. It’s a blessing.”

On the pitch, it was Team Yellow that emerged victorious over Team Blue, 4-3. Hannah Betfort, Yimmi Chara, Nathan Fogaça, Selmir Miscic, Jaroslaw Niezgoda and 17-year-old Vova Kubrakov, a Timbers academy player born in Ukraine, all scored in the match.

“Big occasion, I’m really thankful for it. It’s for my country. Any support, all the donations, go to my country and I’m really thankful,” Kubrakov said on the broadcast at halftime. “It means a lot to me to be on that field to play, just to have fun. But I know that this money that’s raised here is going to go to people in need in my country. My heart aches for everyone there, I have family there and I just hope that everything ends soon and peace, peace everywhere, peace for the world, peace for Ukraine.”

But clearly on this night, the scoreline was nowhere near as important as the cause.

“It means everything. You can see the support we had with the fans, doing it for a great cause. Everyone was behind it,” Timbers midfielder Eryk Williamson said after the match. “I know all the players were super excited to play this game and it turned out to be a really fun one and ultimately it’s historic to do something like this.”