Page: New broadcast era kicking off for soccer in USA.

New broadcast era kicking off for soccer in USA.

By Dylan Butler | Posted 19 days ago 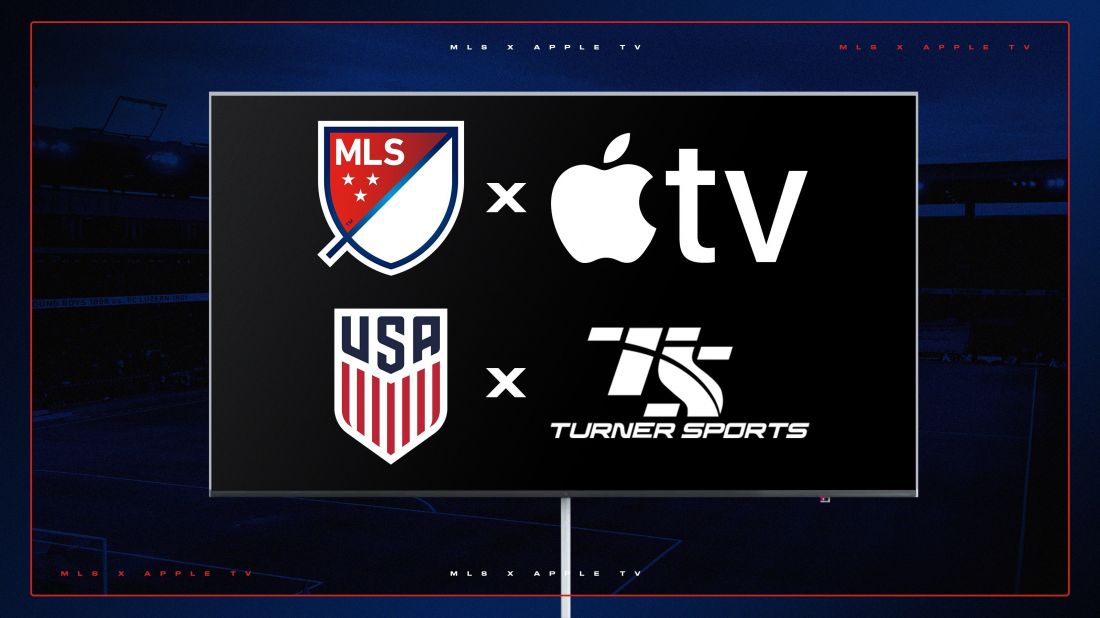 Soccer viewing in the United States will look like nothing that’s been seen before this year.

Ahead of next month’s season opener, Major League Soccer and Apple TV announced details of their historic, innovative and $2.5 billion broadcast deal. The U.S.Soccer Federation is set to embark on a new rights deal with Warner Bros. Discovery Sports, with US men and women’s national team matches to be featured on HBO Max and TNT.

It’s a new dawn for MLS fans, who will be able to watch live broadcasts and replays of every match of the MLS regular season, 2023 MLS Cup Playoffs and Leagues Cup as part of the subscription service beginning Feb. 1.

That’s not just United States-based fans. Matches, and additional content, will be able to be viewed in more than 100 countries around the globe, on multiple devices and without blackouts.

“It’s not just delivering for viewers around the world this unique experience of being able to watch any game at any time without blackouts on any device,” MLS commissioner Don Garber said at a press conference last week. “But it’s to do it with the most innovative and forward-thinking company in the history of the world. We couldn’t be more excited about it. The best is yet to come.”

In addition to the matches, MLS Season Pass will also include an NFL RedZone-like whip-around show with live look-ins as well as pregame and postgame shows. MLS is providing the production and the core of the on-air talent was announced last week.

That includes Taylor Twellman, who spent the last 11 years as the lead analyst for ABC and ESPN for its MLS and USMNT coverage.

In a social media post, Twellman announced his departure from ESPN ahead of his introduction on Apple TV.

“I can now unapologetically be myself,” Twellman said at the press conference. “I can cover the league that all of us up here love, that all of us that have been involved with the league can do something with no excuses and to just do it.”

While ESPN has stepped away from MLS and US national team matches and local broadcast deals were severed, MLS will still be on linear TV this year and likely beyond, with FOX and Spanish-language Univision broadcasting a match of the week.

The large majority of matches, with streamlined start times and English and Spanish commentary — French in addition for Canadian teams — will be on Apple TV.

“MLS Season Pass is one of a kind, it’s never been done by any professional league,” said Eddie Cue, Apple senior vice president of services. “We have every single game, no blackouts, you can watch them around the world. … across all kinds of devices, billions of people now have access to this. It’s going to be incredible.”

The on-air talent team also includes Maurice Edu, who spent the past five years as an analyst with FOX Sports, in addition to commentary for CBS Sports and calling Atlanta United matches the last two seasons and Max Bretos, who was the lead soccer play-by-play announcer for FOX Sports from 2003 to 2010, did play-by-play for ESPN and spent the last five seasons as LAFC play-by-play voice.

“I’ve worked for Fox and ESPN and it was a great experience covering this league, but we’ve never had anything like this,” Bretos said.

Joining Bretos on the play-by-play side will be Steve Cangelosi, who  play-by-play duties for the New York Red Bulls on MSG Network for 21 years, Jake Zivin, who has been the Portland Timbers voice for the last seven years, popular Spanish announcer Pablo Ramirez and Frederic Lord, who will be one of the main French play-by-play broadcasters.

Studio hosts include Liam McHugh, who leads Turner Sports’ NHL coverage after serving in the same role for NHL on NBC for 10 years, Jillian Sakovits, who spent the last four years covering Atlanta United as pregame and postgame host for FOX Sports South and was also a sideline reporter for ESPN’s soccer coverage and Tony Cherchi, who has covered soccer extensively for ESPN, Univision, and Tubi.

Additional on-air talent is expected to be announced ahead of the Feb. 25 season opener.

“We’re going to bring all of Apple to this,” Cue said. “This is not just a side thing. We really believe in it. We think the long-term opportunities here are huge for both of us.”

In addition, the US Soccer Federation announced its commentary team for the opening matches of what is an eight-year deal.

The first of what will be more than 20 matches throughout the course of WBD Sports’ first season, will be an international friendly between the USWNT and New Zealand Jan. 17, 10 pm ET on HBO Max.

The first USMNT match on the platform will be a friendly against Serbia on Jan. 25, 10 pm ET.