By Stefan Bondy | Posted 18 days ago 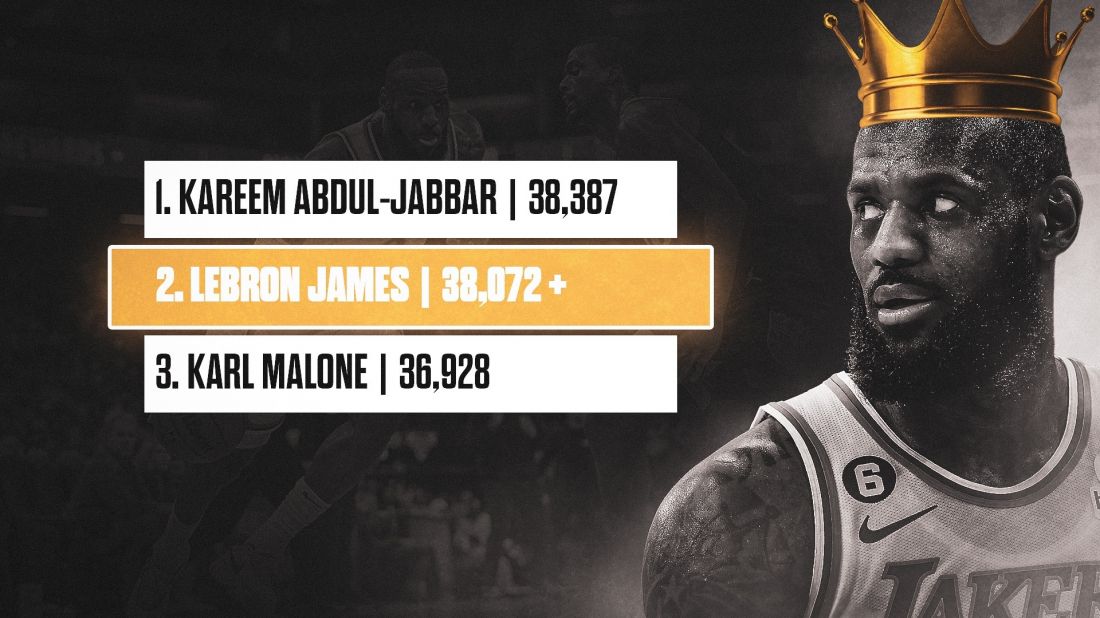 The shame of LeBron James’ inevitable run to the scoring record is his clear discord, or at least apathy, toward the current placeholder. So, few times do we get to witness such a significant torch being passed from a living sports titan to his successor, let alone when both athletes competed for the same franchise.

Yet James, as he stated before the season, has “no relationship” with Kareem Abdul-Jabbar. LeBron delivered that comment coldly in sunglasses and it was widely interpreted as a slight.

Why? Abdul-Jabbar publicly criticized James over his comments about the COVID-19 pandemic and vaccine, among other things, and it’s hard to separate that from LeBron’s cold shoulder.

We can only hope that differences are reconciled before the record-breaking moment, and Jabbar already took a step by apologizing. The celebration of LeBron’s 38,388th-point wouldn’t feel right without Jabbar’s presence.

Especially if it’s in Los Angeles.

Regardless, that date is fast approaching. The current projection is mid-February, not long before the All-Star break.

And when it happens -- when James officially scores more points than any of the roughly 4,400 players in NBA history -- his record will be more impressive, more worthy of validation into the GOAT category, than Jabbar’s accomplishment from 34 years prior.

1. LeBron did it in better time

Yes, Jabbar lost four years of his prime by going to UCLA, whereas James was drafted straight out of high school. That’s an important factor we shouldn’t ignore. But James will require roughly 150 fewer games than Jabbar to reach 38,387 points. Jabbar had the longevity and durability for the record, and James added greater efficiency. He probably won’t play until 41 years old like Jabbar (or maybe he will?), but just one more season and James could hit the 40,000-point mark.

Jabbar’s role on offense was fairly straightforward: Get into post. Get to the sky hook. Dish it to a cutter if he’s double-teamed. To be clear, Jabbar was elite at these things. He’s the best post-up player in NBA history and the sky hook was unstoppable. But Jabbar also had two all-time point guards as teammates in Magic Johnson and Oscar Robertson. LeBron, on the other hand, was Magic, Jabbar and Robertson. At 35 years old, he nearly averaged a triple-double at 26.4 points, 10.6 assists and 8.2 rebounds. He’s the only member of the 30k, 10k, 10k club.

I know this sounds like the previous point but we’re talking here about sheer time on the basketball court. Contrary to trends of today’s load management, James actually averaged more minutes per game through his 20 seasons than Jabbar. That’s just in the regular season. In the playoffs – when the game gets really demanding – James has already played 2,184 more minutes than Jabbar. And if you count playoff points, James would’ve broken the all-time scoring record last season.

4. LeBron is a better actor

Just kidding. “Airplane” is a treasure and “Space Jam 2”should be rocketed into the sun.

Legacies in the NBA aren’t about accumulated statistics or records. That’s for baseball. They serve a role in basketball, for sure, but the greatness of an individual player is debated mostly through awards. How many championships did Kobe Bryant win compared to Tim Duncan, for instance? How many MVPs? How many Defensive Player of the Year trophies? Finals MVPs?

There are exceptions to this rule, two statistical records that sit in hallowed grounds in Springfield. The first is Wilt Chamberlain’s 100-point game, and that will never be matched. Teams are scoring more than ever because of the emphasis on 3-pointers, yet only one player in the last 60 years -- Kobe Bryant -- cracked 80 points.

Nobody is touching triple-digits.

The other record belongs to Jabbar, and his time is almost up.

None of this is meant to diminish Jabbar’s career or scoring record. At 75 years old, he remains on the Mount Rushmore of living legends, too often ignored in the GOAT discussions. But simply put -- LeBron James, when he inevitably reaches the milestone, is the undisputed and deserving scoring king.