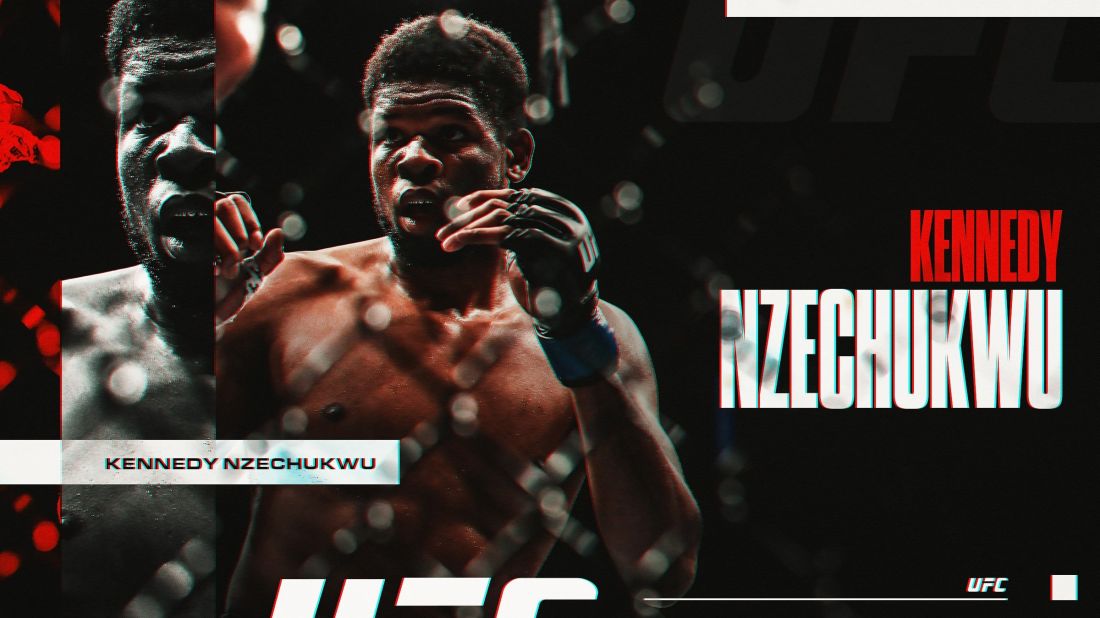 In each of his first two trips into the Octagon this year, Kennedy Nzechukwu was in positions where it looked like it wasn’t going to be his night, but each time, the emerging light heavyweight showed tremendous resolve and resilience, navigating the rough waters to secure stoppage victories.

He entered his meeting with highly regarded newcomer Carlos Ulberg at UFC 259 in March as a considerable underdog and absorbed an ungodly 83 significant strikes over the opening five minutes. He caught 63 more in the early stages of the second round, the two trading heavy blows in the pocket; no quarter asked, and none given.

As Ulberg’s pace slowed, there was Nzechukwu, in his face, applying pressure, connecting with crisp shots before putting a right hook on the debuting fighter’s chin, sitting him down along the fence, and bringing the fight to a sudden, dramatic halt.

Three-and-a-half months later, he spent most of the first two rounds of his fight with Danilo Marques with the Brazilian draped on his back, hunting for submissions. He defended well, fighting the hands each time Marques looked to attack a choke, but entered the third round in need of a finish in order to earn another victory.

Twenty seconds into the frame, the fight was stopped as Nzechukwu swarmed Marques with punches, deploying the approach his coach Sayif Saud laid in their corner between rounds.

“You saw the UFC’s piece on him — it was really, really good  — and you know his story,” began Saud, speaking about his ascending charge and the resiliency he’s exhibited in his last two fights. “He deals with a lot and I think you nailed it — nothing bothers him in there.”

Nothing bothers him because the adversities thrown his way inside the UFC cage pale in comparison to the struggles he’s witness his mother go through.

Nzechukwu’s mother suffers from amyotrophic lateral sclerosis, commonly known as ALS or Lou Gehrig’s disease, a neurodegenerative disease that results in the progressive loss of motor neurons that control voluntary muscles. Her son is her chief caregiver from the time of her diagnosis in 2014, having previously taken on multiple jobs in order to afford an apartment where the two could live after his father showed little inclination towards helping to combat the numerous challenges headed the family’s way.

Reaching the major leagues of Mixed Martial Arts is a demanding pursuit with no guarantees. It takes hours spent in the gym, working on your craft; getting beaten up, broken down, built back up, just to get beaten up all over again.

It requires maniacal dedication and for athletes to be selfish — to put their dreams above all else; to direct all their energies towards becoming the absolute best version of themselves possible — and then, only a select number are good enough, successful enough, fortunate enough to compete on the biggest stages.

Nzechukwu is an exception.

“He’s 100% taking care of his mom,” said Saud, the co-owner and head coach at Fortis MMA in Dallas, where Nzechukwufirst showed up as a 20-year-old with zero experience, but a wealth of raw potential and a willingness to learn. His mother, who attended practices routinely until she fell ill, brought him there. “He’s the guy. He does it all. He’s her daily caregiver.”

Where most everyone else aspiring to reach the UFC has to eschew all other obligations in order to chase their dreams, Nzechukwu has always put his mother’s care first. Now, with four UFC appearances under his belt and carrying a three-fight winning streak into this weekend’s event, the quiet 29-year-old puts his responsibilities as a son ahead of everything else.

And rather than feeling increased pressure as tries to balance caring for his mother with his burgeoning career, his coach believes his successes earlier this year have actually made things a little easier for the towering, powerful Nzechukwu.

“I think that him finally getting the result that we all knew that he could get I think it made him much more positive, much more focused, much more sure of himself, and even more motivated,” offered Saud, who has graduated more than dozen fighters to the UFC from the regional ranks, working with many of them from the outset of the careers. “I feel like it has had a real positive effect in terms of his work ethic and focus.

“It’s less pressure in a way, because now he’s had success, he’s tasted it, and he knows he can get it done in the Octagon,” he added. “He’s finished two tough people in a row, so I think there is almost less pressure because he’s finally had those…”

Saud paused, searching for what he was trying to convey.

“It wasn’t a rough start going 1-1, but with the way everyone piles on…”

Nzechukwu lost his promotional debut against Paul Craig in the final minute of the third round. After dominating the action for the majority of the contest, the newcomer was caught in a submission late in the contest and tapped out. He returned five months later and collected a unanimous decision victory in a fight where his opponent was penalized two points for repeated low blows.

Last-minute setbacks when you’re green often prompt observers to view you as being unprepared to compete at the highest levels, and tepid decisions against an equally raw opponent don’t do much to change those opinions.

Since returning to action, Nzechukwu has not only shown he belongs, but he’s looked like someone capable of thriving in the UFC light heavyweight division.

This weekend, Nzechukwu returns to action against Da-Un Jung in a bout that is challenging on multiple levels.

His South Korean opponent is undefeated in the UFC, having gone 3-0-1, and enters on a 14-fight unbeaten streak overall. He’s solid in every facet of the game, but a complete unknown commodity beyond the most ardent UFC followers, making this a high-risk assignment carrying very little reward.

“This is a hard fight that he has coming up,” began Saud, a no-nonsense leader whose own fighting career was halted by injuries. “This guy is undefeated in the UFC — he’s big, strong, super-underrated.

“It sucks that the situation is what it is, but you can’t say no to the fight because the guy is 3-0-1 and if you want to make a run, these are the guys you’ve got to beat,” continued Saud, who would have preferred to see his charge positioned in a matchup with a little more upside.

That was before Nzechukwu reminded him that there is no challenge he’s not up to undertaking.

“I think that it’s one of those fights where if he can get through this fight — and this is what he told me, because he’s awesome: I said, ‘Hey man — this is a really hard fight and nobody knows this guy. We don’t get a lot from this,’ and he goes, ‘Coach, it doesn’t matter; we have to fight them all anyway.’

“That’s how champs talk, because it’s the truth,” Saud said after a beat, beaming with pride. “That’s his mindset, how he’s been, and who he is.”

Having passed multiple tests inside the Octagon and dealt far more serious challenges outside of the cage for the last several years, Saud believes Nzechukwu is in a place where everything is finally starting to click and come together for his talented pupil.

If he emerges victorious this weekend, a step up in competition will be in order next time out, and the challenges will only continue to get greater going forward.

Challenges inside the Octagon are nothing; not for Nzechukwu.