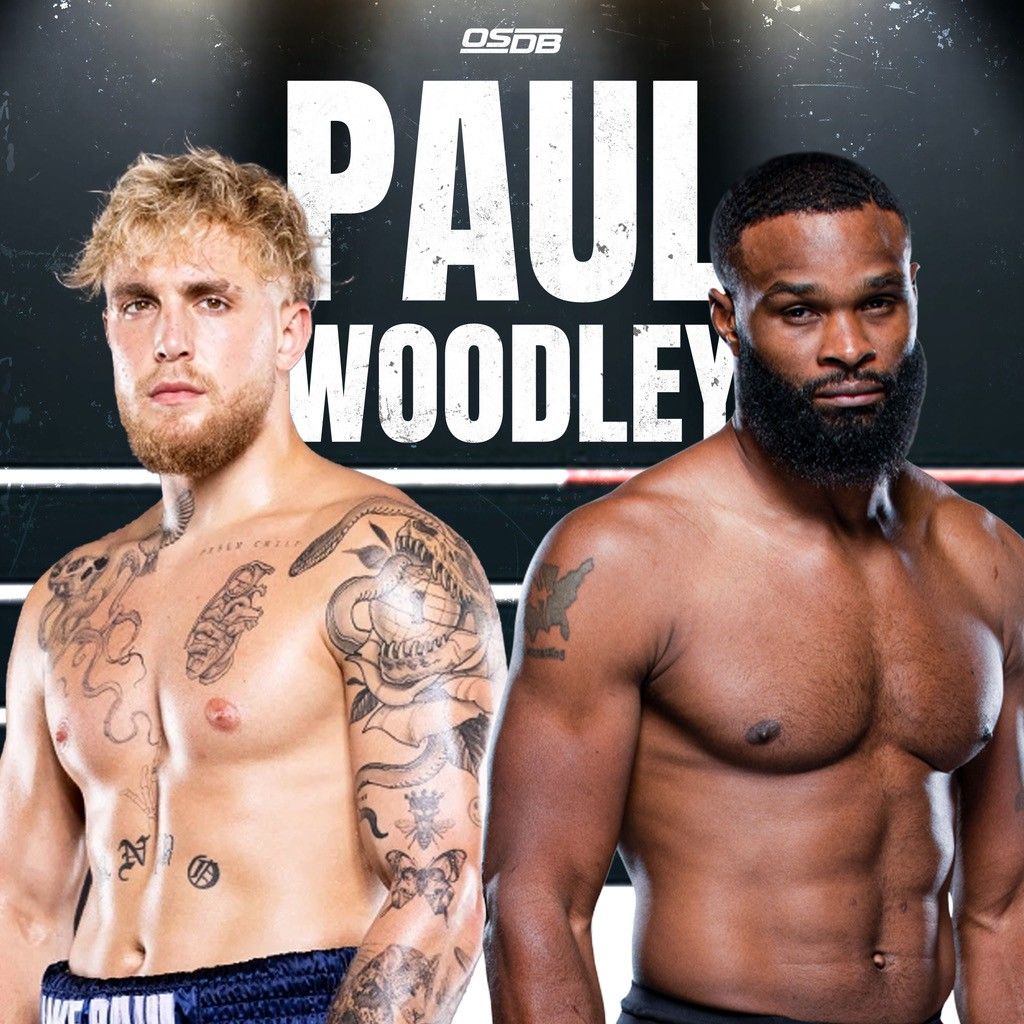 Sunday night at Rocket Mortgage FieldHouse in Cleveland, OH, Jake Paul and Tyron Woodley will step into the boxing ring to settle their beef in what is — surprisingly and yet not surprisingly — the most highly anticipated fight of the summer.

Before the principles square off, let’s examine some of the key talking points and try to answer a handful of questions that hover over each foray into the boxing ring made by one of the Paul brothers.

WHEN DID JAKE PAUL BECOME A BIG DEAL IN BOXING?

Long before moving into boxing, Jake Paul and his older brother Logan were popular YouTube personalities, generating literally millions of views with the vlogs, which primarily featured the siblings pulling pranks and being general jackasses.

Since fame and celebrity are no longer tethered to a particular talent these days, the brothers parlayed their influencer status into various different opportunities, including Jake Paul landing a role on a Disney Channel series called “Bizaardvark.”

The summer after getting canned from the show, the Paul brothers faced off with their British counterparts, KSI and his younger brother Deji Olatunji, with Logan facing the former and Jake facing the latter. While Logan dropped a majority decision to KSI, Jake earned a fifth-round stoppage win over Deji Olatunji in the co-main event.

The YouTube Pay-Per-View generated over a million buys worldwide (plus an equal number of live streams) and everyone involved made bank, which meant there was no way it was going to be a one-time deal.

Jake Paul turned pro following his lone amateur appearance in Manchester, knocking out another YouTuber, AnEsonGib (known as Gib) on Jan. 30, 2020, on the undercard of the Demetrius Andrade-Luke Keeler fight in Miami, following that up with a viral second-round knockout win over former NBA player Nate Robinson as part of the undercard for the Mike Tyson vs. Roy Jones Jr. exhibition toward the end of last year.

The video of his win over Robinson made the rounds, and Paul wisely used that opportunity to take aim at a bigger target, getting into a war of words with former Olympian and MMA fighter Ben Askren. The build-up was widely covered and Paul shone in the April 17 fight, knocking out the former Bellator and ONE Championship titleholder less than two minutes into the opening round.

One of the people that cornered Askren for that fight was his former Univeristy of Missouri teammate and former UFC welterweight champ Tyron Woodley, who got into multiple exchanges with Paul and his entourage before and after he knocked out Askren, eventually leading to this weekend’s fight being booked.

That’s the long version and the timeline, but the short answer is this: the kid has charisma, if it’s largely in the way you love to hate the best heels in professional wrestling, and when you combine a massive following with his annoying brand of moxie, people will pay attention.

And if people are willing to pay attention, they’re willing to spend money, and being a draw is always going to make you a big deal in combat sports, even if you just parachuted into the sport and have yet to really prove yourself.

Jake Paul is Kimbo Slice for the TikTok generation and just as the late backyard brawler parlayed Internet celebrity into significantly bigger opportunities, “The Problem Child” is doing the same.

WHAT DOES IS SAY ABOUT BOXING THAT JAKE PAUL IS ONE OF THE BIGGEST DRAWS?

Nothing, because this is spectacle, not sport, and spectacles quite often out-perform sports in situations like this.

This fight, Paul’s previous fights, and his brother’s recent exhibition against Floyd Mayweather Jr. aren’t meant for boxing purists that grew up watching greats compete on “ABC Wide World of Sports” or tuned into “Friday Night Fights” on the regular. These are carnival attractions designed for a completely different set of people — Jake Paul fans; the TikTok generation — and shouldn’t be viewed as a threat to boxing.

It’s never going to be what it was back in the day because the allure and luster of “The Sweet Science” hasn’t carried over generationally the way it did in past decades, but there are still sublime talents, terrific fights, and compelling stories playing out inside boxing rings every year, and the presence of Jake Paul on the fringes doesn’t change that.

Mayweather Jr. boxing Conor McGregor did massive numbers, yet no one connected to boxing took it seriously; this is no different.

WHAT MAKES THIS FIGHT MORE TELLING THAN THE OTHERS?

Up to this point, Paul has been picking off punching bags, knocking out an untrained YouTuber, a former Dunk Contest winner with no experience, and a pure grappler in Askren.

But Tyron Woodley can crack, earning seven of is 19 MMA victories by knockout or technical knockout, including winning the UFC welterweight title by felling notoriously tough-to-finish champion Robbie Lawler with a blistering overhand right. While that was Woodley’s last knockout win, “The Chosen One” clipped Vicente Luque five months ago in their one-round classic at UFC 260, proving he’s still got some pop in his hands, and now he doesn’t have to worry about anything other than boxing.

Now, Woodley is 39, has never boxed professionally, and lost each of his last four appearances under the UFC banner, so there are obvious reasons to wonder if he’s beyond his prime or been through too many tough rounds in the cage (and on the wrestling mats before that) to be considered a true test for Paul but there is no denying he is a legitimate athlete and the most skilled fighter to share the cage with the 24-year-old rising star to date, and that alone makes this far more compelling than any of Paul’s three previous fights.

This is a bit of a litmus test for Paul — a chance to silence the doubters a little and pick up a victory against a proven athlete with far more of a striking pedigree than anyone he’s faced thus far.

Woodley has committed himself to preparing for this fight and isn’t going in there to end up on Jake Paul’s highlight reel, so it should be a genuine fight that tells us a little more about how seriously Paul is taking his boxing career and what kind of upside he possesses going forward.

WHAT DOES TYRON WOODLEY HAVE TO GAIN?

You mean besides money, right?

In addition to getting paid a grip of cash, the former UFC champion, who is currently a free agent, has the opportunity to become a conquering hero in the MMA community by ending Paul’s run.

For whatever reason, the MMA community gets salty whenever someone like Paul comes along and shows up an MMA fighter or grabs the combat sports spotlight, and Askren getting blasted earlier this year didn’t help.

Whether he wants it, Woodley is being positioned here as Askren’s avenger and a surrogate for the entire sport, which is ironic because he never got nearly this much support from the MMA community when he was UFC champion, and a win over Paul — particularly if he knocks him out in spectacular fashion — would create a whole bunch of new opportunities for him while instantly refurbishing the way he’s viewed by the audience.

WHERE DO WE GO FROM HERE?

I don’t think a Jake Paul loss means the end of this whole Jake Paul boxing experience, but it will mean a slightly diminished spotlight going forward because it’s harder to sell ticket when you’ve already seen someone get beaten.

He’ll keep fighting, but he probably goes back to handpicked opponents, rather than former UFC world champions.

But the far more interesting avenue to explore is what happens if Paul wins on Sunday night because there are a few different options that would all make sense.

Beating Woodley could be the end point of Paul’s “fighting non-boxers” stage and signal a transition into squaring off with actual trained, professional boxers.

Now, I’m not saying you drop him in with WBA cruiserweight world champ Arsen Goulamirian or anything like that, but a date with someone that has a handful of solid wins, is on the way up, and could use the exposure would make a lot of sense, and be an absolute boon for that fighter.

It’s honestly a little surprising to me that more actual boxing prospects haven’t been blowing up social media trying to get a fight with Paul because there might not be a better way to get paid and get attention than sharing the ring with the unbeaten, but unproven social media star right now.

Yes, McGregor is currently moving around Los Angeles in a motorized scooter after breaking his leg in his rematch with Dustin Poirier a couple months ago, but this is a fight Paul has been talking about for a while now and “The Notorious” Irishman has never met a lucrative payday he didn’t like.

McGregor has already ventured into these waters before, with his August 2017 loss to Mayweather Jr. and a fight with Paul would surely generate more money than anything he could return to in the UFC at the moment. Plus, it’s a much more winnable option than stepping back into the Octagon against another world-class mixed martial artist, and I think that could factor into McGregor’s decision-making process as well.

McGregor broke his leg on July 10, so if you give him a year to heal, rehab, and then train, it wouldn’t be a stretch to have a Fourth of July spectacle headlined by Paul and McGregor.

Both have massive followings, massive drawing power, and truly sharp business sense when it comes to these kinds of things; don’t be surprised if this is what happens.

Before you call me crazy, just hear me out.

Alvarez is set to face undefeated IBF champ Caleb Plant in a bout that will crown the winner the first undisputed super middleweight champion. He’s 56-1-2 in his career and turned 31 in mid-July, and after his fight with Plant, there aren’t many appealing matchups remaining for him, nor does he have the size or stature to keep moving up in weight much further.

So d’you know what might be a really appealing way to ride off into the sunset? Bombing on Paul for an ungodly sum of money inside AT&T Stadium in Arlington, TX, where his summer engagement with Billy Joe Saunders drew more than 73,000 people.

This is another one of those fights that Paul has already been planting the seeds for in the build to his fight with Woodley on Sunday, and while it seems like the 24-year-old businessman has an ideal path etched out — beat Woodley, face and beat McGregor, fight Canelo — I’m sure he could be persuaded to change his plans and jump into the ring with Alvarez next if the Mexican superstar’s team brings the idea to them.

And just in case you were wondering, Canelo would clobber Paul, easily.