Page: This horse tale is a dream come true

This horse tale is a dream come true

By Stefan Bondy | Posted 14 days ago 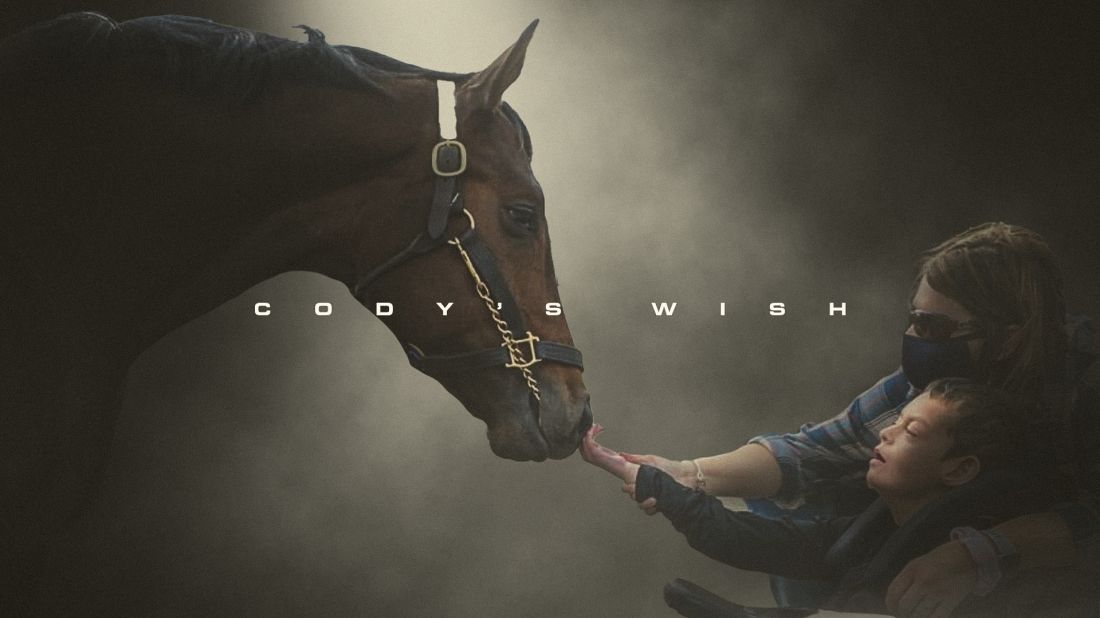 There was a part of Kelly Dorman that chalked up the first encounter to a fluke. Animals are unpredictable, Dorman thought, naturally curious.

Before the second meeting, Kelly was warned not to expect the same reaction toward his son.

Except the horse, a future Breeders Cup champion, did it again.

“That horse didn’t act like anybody else was there,” Kelly Dorman, the father of Cody, told OSDB Sports. “It was just them two. And he did the same thing.

“He came to Cody, let Cody rub him on the nose, put his head on his lap, and Cody started laughing out loud. Cody has some little noises and stuff, happy noises he makes, but I call it a deep belly laugh like you heard the best joke you’ve ever heard. He did that and I can count the number of times he did that on one hand. And since that day, he’s been on an upward trend mentally. I don’t know if it regained his sense of purpose or what. He’s pretty much back to where he was. It was almost like he flipped a switch.”

To fully understand the inspirational Hollywood story of Cody’s Wish, you first have to know about 16-year-old Kentuckian Cody Dorman.

Cody is a fighter. He was born with Wolf-Hirschhorn syndrome, a rare genetic disorder that affected much of his body and left Cody unable to walk or speak. Cody underwent between 40 and 50 surgeries, according to Kelly, who added that his only son is prone to seizures.

In 2018, through the Make-A-Wish Foundation, Cody toured the Keeneland Farm in Lexington first met the horse, then a six-month-old foal. The connection was so powerful that the farm manager took action.

“She called me and said we just want you to know how touched we were by all that,” Kelly said. “All the years of doing Make-a-Wish, they’ve never had one of the foals interact with anybody like that. She said, ‘I hope you don’t mind but we just named him after your son, named him Cody’s Wish.’

Still, Cody was struggling. Adversities began piling up. In November of 2018, just about a month after touring Keeneland, Cody required emergency surgery because a blood vessel burst in his stomach. He spent that Thanksgiving in the hospital. Then his grandfather died in 2019. Then the pandemic hit. Cody hit a mental wall.

“He’s always had this never-quit mentality. But just seeing him just kind of start mentally falling off, man, that was harder on us than anything we’ve seen him go through,” Kelly said. “And he’s been through somewhere in the neighborhood of 40 to 50 surgeries.

“Seeing that part of him, going to that dark place, was really hard. We buckled down pretty hard during COVID. Nobody knew what was going on. He just started saying some things with his tablet – stuff we didn’t want to hear, stuff we didn’t like. And I wasn’t going to let him – that was enough. Started to do things to get his head back to where it needed to be. And one of them was contacting the farm.”

That second meeting with Cody’s Wish – which validated the unique connection between boy and horse – occurred in 2020. The following year, Cody’s Wish began racing and showed promise with three straight third-place finishes.

But something was missing.

“Cody has a tablet he speaks with, and he told my wife, ‘The horse is not going to win his first race until I’m there to see him,’” Kelly said.

So, the family traveled to Churchill Downs in October of 2021.

The rest of the story is the ascension of a championship horse, with a culmination earlier this month at Keeneland Race Course.

The stage was fitting for Cody’s Wish to capture the $1 million Breeders Cup Dirt Mile, which the horse won in dramatic fashion by a head. Cody was on hand next to his father, and the images of their celebration left the TV announcers speechless.

“I remember just hugging him and telling him, ‘He did it, he did it,’” Kelly said. “I don’t know if I experienced anything that powerful in my life.”

Cody and his father still haven’t come down from the high of that day.

“For the stars to line up the way they did. For the Breeders Cup to be 30 minutes from our house. And for him to win that race – and for Cody to be there to see there first hand – that place was so electric. You could feel it go through you,” Kelly said.