Page: GET READY FOR FRENZY OF FEATHERWEIGHT ACTION

GET READY FOR FRENZY OF FEATHERWEIGHT ACTION 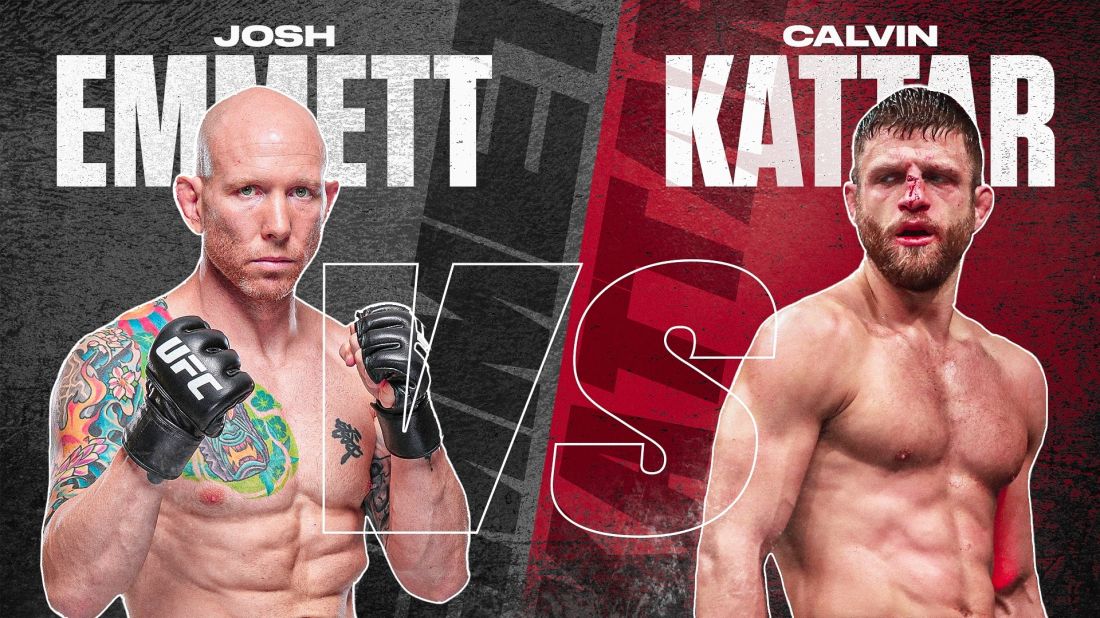 Over the next five weeks, six of the top eight featherweight competitors in the UFC will cross the threshold into the Octagon, battling it out on a collection of high-stakes, highly competitive matchups. The bouts will set the course for the division heading into the second half of the year.

Saturday night in Austin, fourth-ranked Calvin Kattar faces off with seventh-ranked Josh Emmett in the main event of a quality fight card struggling to get the attention it rightfully deserves in the wake of last weekend’s outstanding Pay-Per-View event in Singapore.

Two weeks later, rivals Alexander Volkanovski and Max Holloway will meet for a third time, facing off in the co-main event of UFC 276, with the featherweight title once again hanging in the balance. The champion Volkanovski enters up 2-0 in the series, but many feel Holloway did enough to reclaim the title in their second encounter, and he’s since done enough to merit a third meeting with the Australian titleholder.

Another two weeks after that, Brian Ortega and Yair Rodriguez mix it up in the main event of a fight card that also features Shane Burgos and Charles Jourdain in the co-main event, and airs on ABC. If you add Burgos into the calculations — he’s currently stationed at No. 14 in the rankings — it means seven of the 16 ranked competitors in the division are in action between now and the end of July.

Fight bookings often come in clusters and this is the absolutely a “Featherweight Summer,” but it’s also a great opportunity to prepare for a tremendous autumn or winter of action in the 145-pound weight class as well, and it all kicks off this weekend in the Texas capital.

The bout between Kattar and Emmett to close out Saturday’s event at the new Moody Center on the University of Texas campus is the kind of fight we don’t see often enough these days: A fighter coming off a terrific win (Kattar) fighting backwards in the ranking against a dangerous opponent (Emmett) looking to move one step closer to contention.

Kattar is ranked fourth in the division, having solidified his place in the hierarchy with a dominant win over Giga Chikadzein Janaury. The Massachusetts native has fought a freakishly strong strength of schedule since arriving in the UFC. He isn’t choosy about who he fights, preferring to stay active rather than always trying to fight forward in the rankings.

It’s taken Emmett four fights and four years to get back to this position — a UFC main event and a chance to move into title contention. He’s dealt with some serious injuries in between the two headlining turns. But the seventh-ranked fighter from Sacramento is 4-0 since losing in his initial main event assignment and wields legitimate one-punch power that not many in the division carry.

What really ratchets up the intrigue surrounding this fight is that the winner will be front and center in the title conversations regardless of what happens in a couple week’s time at UFC 27. Even if a championship opportunity doesn’t materialize next, a date with one of the other high-profile victors should.

AN ACTIVE CHAMP, A BUNCH OF EMERGING NAMES

After making one start in each of 2020 and 2021, Volkanovski’sfight with Holloway at UFC 276 early next month will be his second appearances in three months and third fight in 10 months, having successfully defended his title against Brian Ortega at UFC 266 in September 2021 and Chan Sung Jung at UFC 273 in April.

An active champion is essential for keeping a division moving and creating opportunities for contenders. The Australian making this quick turnaround means we should get at least one more featherweight title fight before the year is out, provided everyone comes away from the impending championship rematch reasonably healthy.

Getting all these fights lined up and knocked out in such a condensed period of time this summer is not only great in terms of the exciting fights that are poised to hit the Octagon and our television screens in the next few weeks. Make no mistake, the slate is stacked and there are several others that I haven’t mentioned that should be bangers as well. It creates a starting point for building the next collection of matchups to move this division forward.

By the middle of July, every fighter ranked in the featherweight Top 15 will have fought at least once this year. That’s something only one other division can boast — the women’s flyweight ranks, which is unsurprisingly the most interesting and competitive division on the female side of the roster.

What that means is that when the dust settles and the smoke clears after this next round of fights, the UFC brass can sit down and map out the next set of fights to make in order to keep things fresh and exciting in the 145-pound weight class. Some of it will absolutely hinge on how the title fight plays out on a couple weeks, but options abound.

Most important of all is that there are a number of emerging fighters with no history with those in the upper tier queuing up to get a crack at the established names in the division, including:

Arnold Allen: The sixth-ranked Brit picked up his ninth straight UFC victory in March, dispatching veteran Dan Hooker in two-and-a-half minutes to move to 18-1 overall. He’s publicly lobbied for fights with Kattar and “The Korean Zombie,” and shouldn’t be more than one more victory away from challenging for championship gold.

Bryce Mitchell: The 27-year-old from Arkansas moved to 6-0 inside the Octagon and 15-0 overall with a unanimous decision win over Top 15 fixture Edson Barboza earlier this year. The talented grappler has shown improvements on the feet and should find himself sharing the cage with one of the established names fighting in the next five weeks later this year.

Movsar Evloev: One spot behind Mitchell in the rankings and one win ahead of him in terms of their overall records, Evloevcollected the biggest win of his career just a couple weeks ago, thoroughly out-working Dan Ige to earn his sixth straight UFC victory. He called for a date with Allen in his post-fight interview, but a pairing with an established, veteran contender makes far more sense and keeps the prospects moving forward on parallel tracks.

Sodiq Yusuff: a graduate of Dana White’s Contender Series, Yusuff is 5-1 inside the Octagon, with his lone setback coming against Allen. He out-hustled divisional stalwart Alex Caceres in March to get back into the win column, and should fit in opposite one of the tenured names ahead of him in the hierarchy in the second half of the year.

Ilia Topuria: it’s still unclear whether the unbeaten standout is going to return to the featherweight ranks or remain at lightweight, but if Topuria comes back to the 145-pound ranks, he has to be considered a real threat. He has menacing power and serious submission skills that have produced four straight UFC wins and a dozen consecutive victories overall to start his career.

These five — all of whom are under 30 years old and none of whom have fought anyone in the currently ranked in the Top 10 — are the future of the division, and should be cycled in to face the likes of Volkanovski, Holloway, Ortega, Rodriguez, Kattar, Emmett, and “The Korean Zombie” starting in the next six months and going forward from there.

As great as the collection of fights set to take place in the featherweight division over these next five weeks are — and they are outstanding — the matchups that come together in the back half of 2022 should be even better, and will potentially come to define the direction the division takes for the next few years.

And it all starts this Saturday night in Austin.