By Dylan Butler | Posted 20 days ago 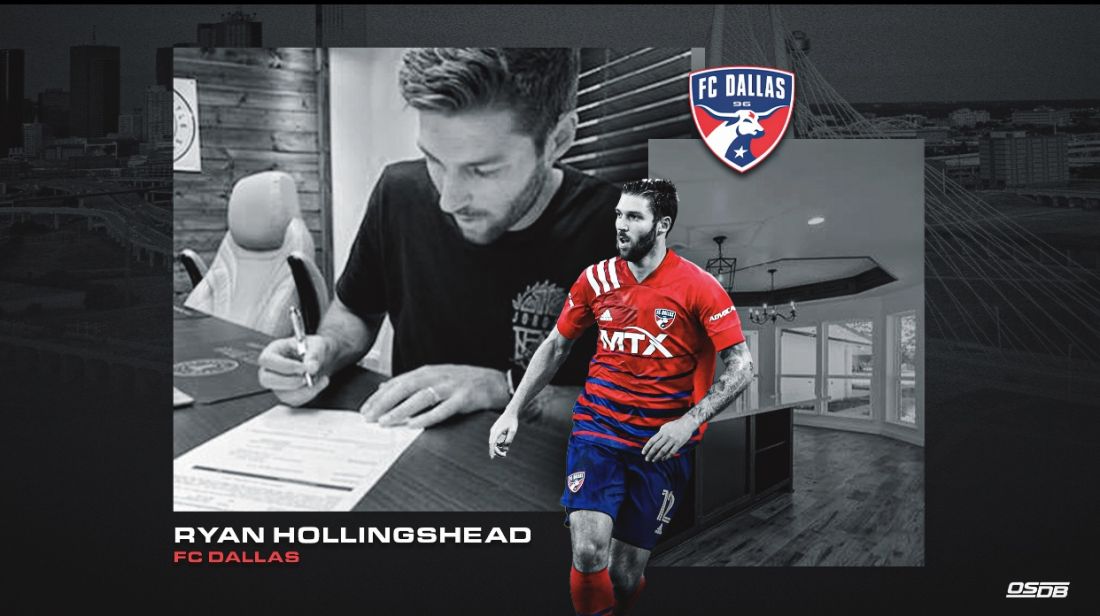 By noon on most days, the FC Dallas defender is done with training, showered, has eaten two meals and is ready for some quality time with his wife and kids. It’s a perk of being a professional athlete, one the 30-year-old wondered if he can take with him beyond his playing days.

Unlike other professional sports in America, most MLS players aren’t set for life when they sign a contract. While a few earn millions a year, the majority of MLS players — Hollingshead included — need to plan for a career after soccer.

Hollingshead, who is in his eighth year with FC Dallas after being selected by the club 20th overall in the 2013 MLS SuperDraft, knew what he didn’t want to do after he hung up his cleats — the monotonous 9-to-5 in a cubicle in some office building. He wasn’t sure what he wanted.

That changed when he and his wife looked to put down roots in the Dallas area and buy their first house. A native of Granite Bay, Ca., Hollingshead knew how astronomical a modest house cost in the Sacramento area and was shocked at the affordability of the housing market in North Texas.

That got Hollingshead thinking. Could he enter the real estate market? Maybe buy and renovate houses, either to rent or to flip? As the wheels starting turning, Hollingshead educated himself about the process as much as possible. He’d read as many books as he could and listened to podcasts on the 20-minute commute to the club’s base in Frisco, while doing laundry or doing some work around the house.

“That kind of just started piquing my interest,” Hollingshead said. “I think real estate is the way to build passive income, I think it's one of the best ways to build generational wealth. And I think at the same time that allows me to do what my personal goals are, which is to be very present dad and free up myself to do Christian ministry.”

As for those shows on television, like “Fixer Upper” and “Flip This House,” among others, they were more entertainment than educational.

“They are fun to watch, and it is fun to see the designs. And honestly, I'd love to be a part of a show like that,” Hollingshead said. “But in terms of like really learning the business of it, I don't think it's too helpful.”

If Hollingshead was going to do this, he wanted to know how to do every aspect, from the financials to the hammer and the nail.

That first house, bought from a cat-loving woman for about $195,000 in 2015, was completely renovated by Hollingshead, with the help of a few volunteers from his church. He replaced the flooring, the carpets, cleaned out the air ducts, painted, put in new kitchen countertops, sanded and stained the cabinets. You name it, Hollingshead did it. It was an arduous six-month process, but it was the perfect introduction to a career he never knew he wanted.

Hollingshead rented out that house and the numbers crunch in his head led to another lightbulb moment.

“If they stay in there for 30 years, I own that house free and clear and they’ve been paying for it. And then on top of that, I’m getting tax benefits for the depreciation of the property and I’m getting about $800 a month in cash flow,” he said. “So I started thinking, if I could get 10 of these all producing $800 of cash flow, that’s $8,000 a month I could be making. That’s when it really stated to click. This could replace an income really quickly and free me up to do the things I really want to do and not have to work in some random office job because I have to.”

All in from that moment, Hollingshead set modest goals — buy and turn over one house a year. If his playing career lasted 10 years, he figured he’d have 10 properties by the time he retired.

But the explosion of the real estate market in the North Dallas area escalated things pretty quickly for Hollinghsead.

In the first year and a half, which Hollingshead said he spent most of learning about the business, he said he flipped two houses. The second year, he did four houses, the third year it increased to eight and now he figures he’d doing 25-30 houses a year, in addition to a wedding venue being developed in Lake Tahoe.

Hollingshead has expanded the business and at this point, he’s got a guy for everything. FOM Capital Group — named for the “First of March,” the day he hired his first employee — is the parent company with several LLCs under its umbrella. He spreads the gospel of real estate to his teammates, especially many of the young ones, who earn enough to potentially buy a property even at the age of 17. One former FC Dallas teammate, Tesho Akindele, now with Orlando City SC, has taken up the cause and took to Twitter to explain to other MLS players why they should jump in the pool as well.

Hollingshead isn’t sure where he stands in the Dallas real estate power rankings. He’s not a mogul, but he’s no small fish either.

“I'm not that big of a player quite yet,” Hollingshead said. “But the goal is to get there for sure.”