By Holly Cain | Posted 20 days ago 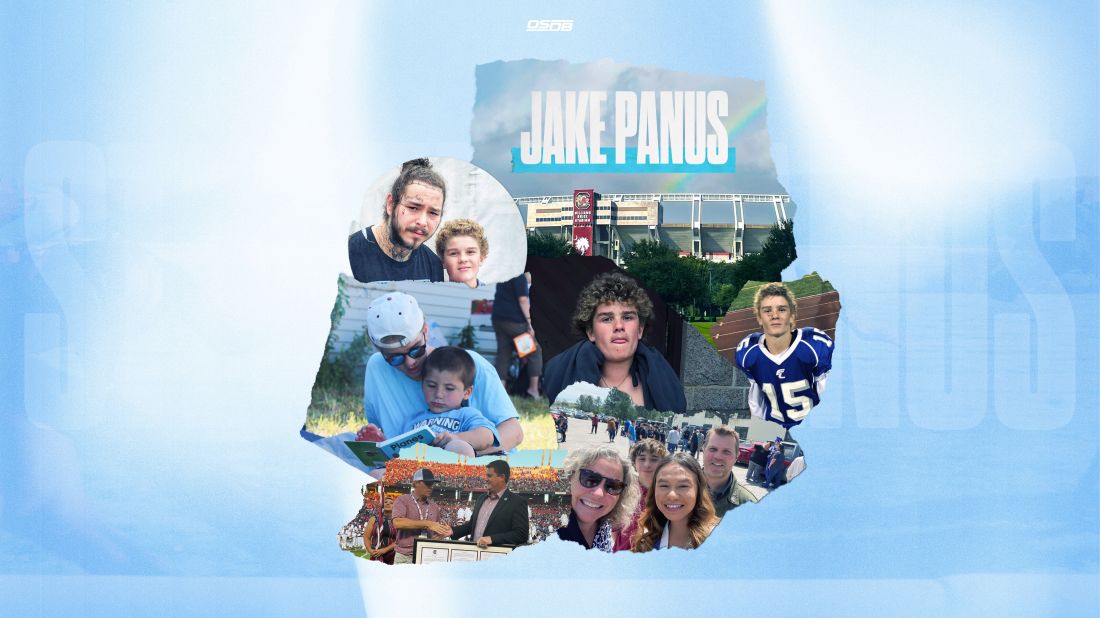 About an hour after Stephen Panus emotionally addressed the University of South Carolina football team and awarded the first Jake Panus Walk-On Scholarship to special teams’ player Matthew Bailey in September, he received a text message from the team’s lead video specialist.

Panus had just announced the inaugural scholarship, named in memory of his 16-year old son Jake, who lost his life in a car accident in August 2020. Jake, an acclaimed high school football and lacrosse player, had hoped to attend South Carolina like his father.

Presenting a deserving young football player like Bailey this scholarship was a way the Panus family could both honor Jake and perpetuate his legacy. Emotions were already running high.

And then the text came.

“It’s not even raining, it’s perfectly sunny outside,’’ the message from the team’s video manager read. “But there is a huge rainbow out in the stadium.’’

“It spanned the entire middle part of the stadium,’’ said Panus, still awestruck as he tells OSDB the story; figuring in some way, it was Jake’s doing - a heavenly stamp of approval.

The women attended Red Cloud High School on the Pine Ridge Indian Reservation, where Jake spent a summer as a volunteer with the Southport Congregational Church Youth Group he belonged to in his Connecticut hometown.

It was an important, life-changing experience for Jake – eye-opening and motivating.

“He connected with the kids there but Jake was also disappointed with the inequalities he witnessed and he wanted to help and provoke change for the better,’’ said Panus, the President of Communications for The Jockey Club Media Ventures and America’s Best Racing.

So, in the painful days after Jake’s accident, instead of flowers or a GoFundMe-type outreach, the family asked, “What would Jake want?

It was significant to be able to make a difference there, Panus said, adding emotionally, “Jake, never had the opportunity to pursue his dreams. … but he lived his life lifting up others.”

The reservation’s small Red Cloud High School educates any of the reservation’s students that chose to attend. In the case of both Rubi Good Buffalo and Cheree Ferguson, that has meant pre-dawn and late-evening hour-and-a-half drives to and from their rural homes to the school, located about 110 miles from Rapid City.

They were not only star students at Red Cloud – Ferguson was the graduating class Salutatorian – but both are outstanding multi-sport athletes as well. A combination of admirable traits that also so aptly described Jake Panus.

“Rubi wants to be the generation in her family and community to heal,’’ said January Tobacco, who also grew up on the reservation, attended Stanford University and has returned to be the school’s guidance counselor.

“She is hopeful to build a better pathway and be a role model for future generations, especially in her community.’’

Cheree, who recently led a mere four-athlete Red Cloud track team to an amazing sixth-place finish in the state track and field competition, may be unsure of her specific major, but she knows her path.

“She’s a phenomenal athlete who knows she also wants to help the community,’’ Tobacco said, adding, “It’s an amazing opportunity for the girls. I wanted nothing more than the best for them.

“I’m super excited. You can see how respectful and honorable they are. They are just so bright. They hug you, wish you ‘good morning” and the fact they woke up 2 hours earlier than anyone [every day for school] and are still always so cheerful is amazing.

“We are very grateful and it’s really exciting to see these girls have a chance to follow their dreams.’’

The Panus family. – Stephen, his wife Kellie and their 13-year-old son Liam – all attended the Red Cloud graduation ceremony last month to present the young women their potential life-changing scholarships.

“His love for life and inspiration endure,’’ Panus said of Jake in announcing the winners; reminding the audience that “the echoes of kindness are endless.”

As rewarding as it was to honor Jake through the scholarships in May, it was also an especially difficult time for the family, considering Jake would have graduated himself later this month.

“This keeps me connected to Jake and to his light,’’ Panus said. “And as hard as it is to be there, it’s something I have to do. As his father, I have a responsibility. And it does mean so much to see the joy in the recipients’ faces and how seriously they take it and how much it means to them.

“It’s what Jake would want, I know that.”

To that end, Panus said he has since discovered another serendipitous occurrence. The expression “Walk-On” certainly has one meaning in American sports – that an athlete made a team without a scholarship.

“I didn’t realize it then, but the term walk-on has a significant meaning in Native American culture, too,’’ Panus said.  “They believe when someone dies, that they “walk on” to the next step in their journey. And so, it was just another one of those universe-connection moments that shows how small we all in the big picture.

“It connected the two scholarships. … and the term having double meaning was really cool, just profoundly meaningful and shows it was meant to be, if you will.”

It’s a way Jake Panus is still impacting the future.

“You see the stark differences in living in America and thankfully this generation comes up and wants to help, cares enough and has a sense of humanity that they are willing to invest their time, resources or money or advocacy,’’ Panus said “It’s important and Jake would have done that.”

He is doing that.

For more information on the Jake Panus Walk On Scholarship visit: https://www.southportucc.org/jake-panus-mem-fund

For more information on the Jake Panus Walk On Football Scholarship at the University of South Carolina: https://donate.sc.edu/AG/sfp/ath/jake-panus-walk-on-football-endowed-scholarship