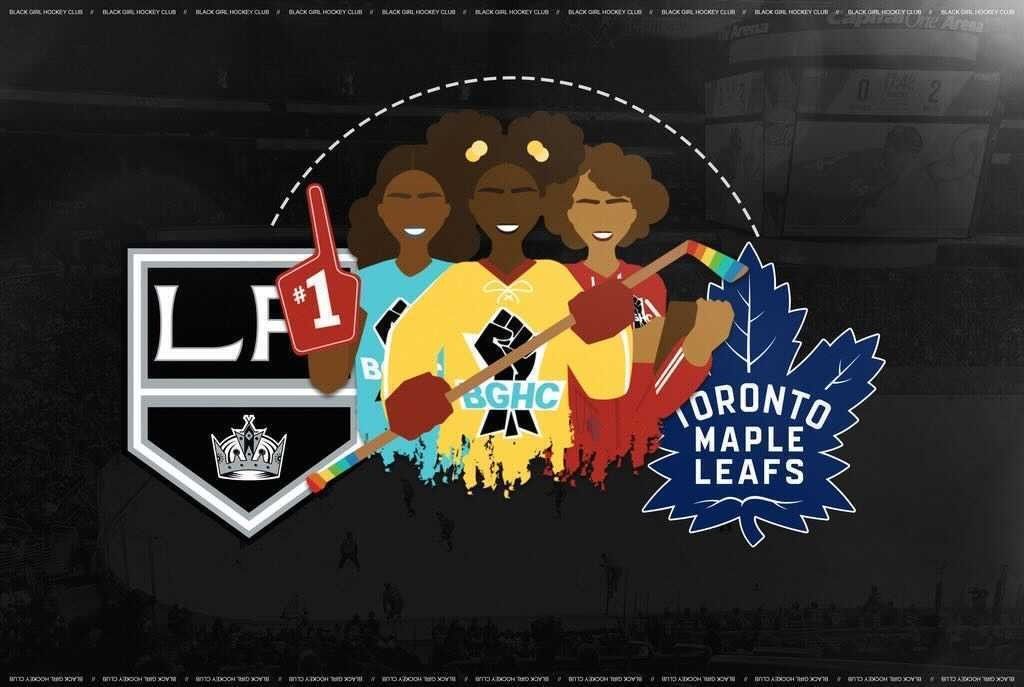 Renee Hess was looking for a community — for like-minded Black girls who had a passion for hockey to converse with, to interact with, to experience the game with, digitally on social media and perhaps together in person, when that was a thing people could do.

What started with a tweet and group chat conversations has developed into a full-blown force of nature, as the Black Girl Hockey Club (BGHC) has morphed from a fan group to a non-profit organization. BGHC stands at the forefront of the push to create change within the hockey world by working with teams and major brands, challenging everyone to disrupt racism on and off the ice and make hockey welcoming for everyone through its Get Uncomfortable Campaign.

“I would go to games and I would look around and I would be having a blast, but I would not see any faces that looked like mine, except for people that worked in the concession stands or the arena,” she continued, sharing a condensed version of the organization’s origin story that also serves as a clear indication of why significantly greater inclusion efforts are needed in every area of life.

“Ask literally any person of color that has been to a hockey game — we all look around the stands and look for faces that look like ours, and if you see one, you do a little head nod like, ‘What’s up! I see you. If s*** goes down, I got your back.’”

A media psychologist and consultant on media, marketing, and digital communications, Dr. Tunisha Singleton saw one of those early tweets from the Black Girl Hockey Club account and it piqued her interest.

There was going to be a meet-up in Los Angeles, with everyone attending a game between the Kings and visiting Las Vegas Golden Knights, with tailgating, pictures, and a meeting with Kings legend Luc Robitaille. She signed up and made the trip to Los Angeles to check things out.

“It was beautiful and I had never seen anything like this anywhere, yet alone affiliated with hockey,” Dr. Singleton said. “This is what I got my dissertation for, so I’ve got to be a part of it.

“It’s really romantic to be like, ‘Let’s stop racism’ like no one has ever thought of that before,” Singleton, who serves as the President of the Board of Directors, said sarcastically, a deep laugh chasing her words. “It would be great, but instead of having these broad, sweeping ideas, how about we take a step back and control what we can control, and those are the programs that we initiate.”

Part of that list of programs is a scholarship venture that awards Black girls in hockey up to $5,000 to offset some of the costs associated with playing the expensive sport. Add in a mentorship program featuring executives from the San Jose Sharks, the hockey division of equipment and apparel company Warrior Sports, and journalist, sports activist, and podcaster Shireen Ahmed designed to expose interested parties to myriad different avenues to engage with the sport, because, as Dr. Singleton said, “What if you want to be part of the hockey community, but can’t skate?

“What if you’re a photographer or a color commentator or you want to get into journalism or hockey operations? We know you have to be at all touch points of hockey, not just on the ice,” she added. “The majority of the work that needs to be done is off the ice.”

The biggest initiative the Black Girl Hockey Club has rolled out, however, is its Get Uncomfortable Campaign.

Launched in September, the Get Uncomfortable Campaign seeks to “explore the necessary steps the sport must take to disrupt racism on and off the ice and make hockey welcoming for everyone.” The three pillars of the campaign are to:

• Encourage the hockey community to make a welcoming space for Black girls and all BIPOC communities as players and fans of the sport.

• Employ and recruit BIPOC applicants to begin the process of diversifying hockey at all levels.

• Educate the hockey community on social justice and allyship with guidance from BIPOC leaders, anti-racism experts, advocates, players, and fans.

According to the organization’s website, there have been 6,312 people who have taken the pledge. Included in that number are the OHL’s Erie Otters, the Los Angeles Kings, and Toronto Maple Leafs, who have blown Hess away with their efforts.

“It’s pretty cool what the Maple Leafs are committing to the Get Uncomfortable pledge,” said Hess, who aptly likened the Maple Leafs to the NFL’s Dallas Cowboys in order to explain the significance of the franchise within the hockey world to her husband.  “They announced their signing onto the pledge back in Black History Month.

“Since then, I got to hop on their official podcast, and I just had a call with some of their researchers about how to utilize some of the data that we’ve put together during the Get Uncomfortable campaign with our pledgers. We’re also talking scholarships and ways to get scholarships and equipment to some of our black girl hockey players up in Toronto.”

“We don’t solicit folks to come sign the pledge in a really intense fashion,” began Hess, who is also the Associate Director of Service Learning at La Sierra University and a diehard Pittsburgh Penguins fan. “We’d love to work with all 32 teams in the National Hockey League, but I appreciate that organizations are being thoughtful about the process, taking the time and asking questions rather than signing on willy-nilly and then deciding that they do not stand for the same things that we stand for like the three pillars of the Get Uncomfortable Campaign which are Educate, Employ, and Encourage.

“We want to make sure that everybody that signs onto the pledge knows what they’re signing onto, which is a pledge to disrupt racism in hockey, but also outside of hockey.

“The way that I look at it is that we’re not here to force any teams to sign, because then it becomes performative and it loses its power,” she added. “Getting these organizations interested often falls under the purview of what the fans are doing; it’s the fans of the club who are reaching out to their ticket reps and asking them about the Black Girl Hockey Club pledge.”

As much as Hess would be thrilled to see every team, in every league, at every level take the pledge, she is actually more focused on making the need for greater inclusion, greater equity, and more representation for marginalized populations within the hockey world clear to individuals, acutely aware that sweeping change is unlikely to come, but small changes made by a collection of individuals have the potential to snowball.

“I had someone tell it to me like this,” Hess continued. “Hockey moves like an iceberg — it goes very slow, it’s very big, and a lot of the things we see going on in the public eye is just the tip of it; there is so much going on behind closed doors, underneath the surface, so I’ve got to be patient.”

She paused and exhaled.

“That’s something that people of color — and Black people in America, specifically — have been told for hundreds of years, ‘Be patient; your time will come,’” she said, picking back up. “I do appreciate that analogy and that metaphor of the iceberg, but also I feel like Black Girl Hockey Club is looking to be included, to have some space in the world of hockey and I that’s not too much to ask for right now.

“We’re not asking to change everything from the top down — we just want more inclusion and respect and to feel as if this culture is willing to engage with marginalized folks in an equal and equitable manner from here out.

“The past is the past, but I feel that we really have an opportunity to shift hockey culture to make it the best that it could be.”

And just in case it is not already clear the fact that genuine, meaningful changes to the longstanding norms within the hockey world are needed, consider the following:

Saroya Tinker is a 23-year-old defensemen who plays for the Toronto Six of the National Women’s Hockey League.

Like so many other Canadians, she’s played hockey since she was a child— playing on rep teams and at Monsignor Paul Dwyer Catholic High School in Oshawa, Ontario, captaining the team for three years.

She played with the Canadian Under-18 team at the 2016 IIHF Women’s World Championship, earning a silver medal, and after high school, she went on to play at Yale University, registering 32 points in 122 games with the Bulldogs, operating as a physical, shutdown defender.

She was drafted fourth overall by the Metropolitan Riveters in the 2020 NWHL Draft and signed with the Toronto Six in June.

“Ever,” said Hess, relaying Tinker’s story, both taken aback and unsurprised by the reality of her situation.

“All these other Black girls across the world who, when we give them their scholarships, tell me they’ve never played with another Black girl or against another Black girl; they’re the only one on their team or in their league, and it’s astonishing to me. But it also speaks to the power of hockey, of that love of the game that these women have and the resiliency of black women to be brave and willing to step into a space that was not create for them.

“That’s what Black Girl Hockey Club wants to do,” she adds. “We want to make sure these women know that maybe it wasn’t for you five years ago, but it’s for you today and going forward, so tell your friends.”