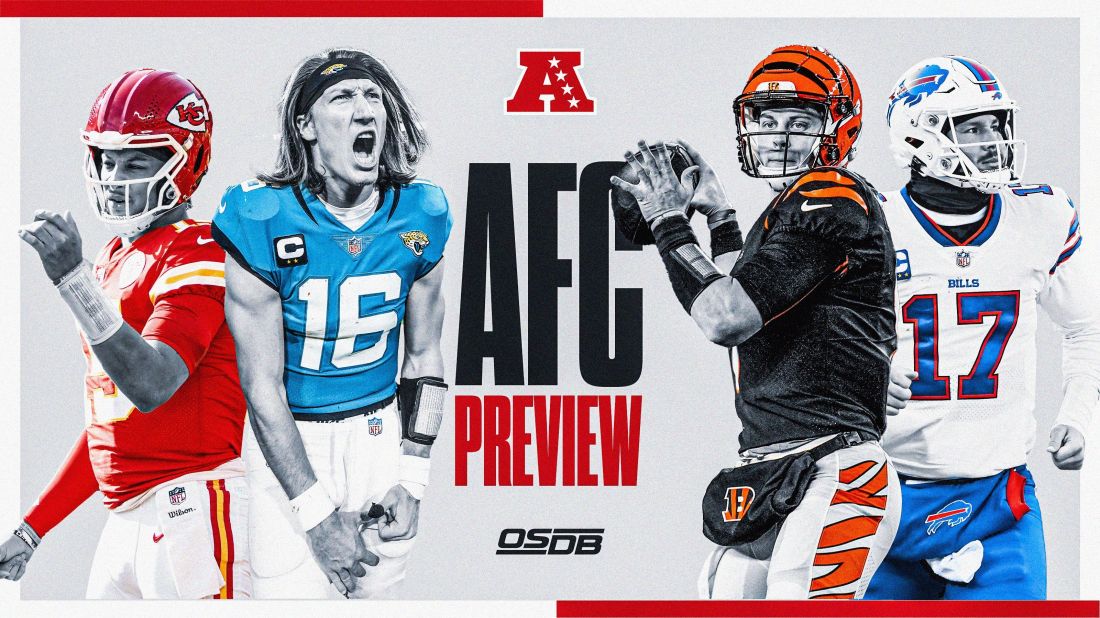 Super Wild-Card Weekend really lived up to its name, particularly in the AFC. The Jacksonville Jaguars kicked off the chaos in the AFC by staging an epic comeback against the Los Angeles Chargers. The Jaguars were down 27-0 when they got the ball with less than 2:00 to play in the first half. Jacksonville QB Trevor Lawrence had already thrown four interceptions by this time, and Jags’ fans were salivating for a spark.

Lawrence began what became a 360-degree turnaround in his performance when he hit resurgent TE Evan Engram for a nine-yard touchdown with :24 left. The former number one draft pick tossed three more TDs in the second half as the Jaguars chased down their prey. Jacksonville’s defense stiffened, and kicker Riley Patterson drilled a 36-yard game-winning field goal as time expired in the fourth quarter. It was Patterson’s first ever postseason field goal attempt, and the man proved to be a stone-cold killer.

The Jaguars came all the way back to upset the Chargers 31-30, recording the third-biggest comeback in NFL postseason history. The mighty Kansas City Chiefs will welcome Jacksonville into Arrowhead Stadium on Saturday to decide who moves on to play in the AFC Championship Game. The Chiefs defeated the Jaguars 27-17 in Arrowhead during Week 10, but KC had no answer for WR Christian Kirk. Lawrence connected with Kirk nine times for 105 yards and two touchdowns.

Expect Kansas City to have its hands full with Jacksonville in the Divisional Round. The Jaguars have stolen the Bolts’ electricity and are using it to spark their own advancement, hoping to be this year’s Frankenstein Cinderella of the postseason dance. The problem with this narrative is that MVP frontrunner Patrick Mahomes III and the Chiefs are well rested and ready to go. Mahomes completed 26 of 35 passes for 331 yards and four TDs against Jacksonville in Week 10, and should post similar numbers in the Divisional Round. Chiefs’ RB Jerick McKinnon will play a major role.

Prediction: When the final whistle blows in Arrowhead Stadium, the Jaguars’ team plane will turn into a pumpkin. The glass slipper still fits Mahomes. Chiefs 36, Jaguars 27.

The last time that the Buffalo Bills and Cincinnati Bengals were on the field together, it was in unified support for the well-being of Bills’ safety Damar Hamlin. The January 2 game between the Bills and Bengals at Paycor Stadium was suspended following Hamlin’s on-field collapse due to cardiac arrest. Bills’ assistant athletic trainer Denny Kellington is credited for saving Hamlin’s life after performing CPR on the 24-year-old.

Hamlin has made a miraculous recovery thus far, and Kellington has received an MVP vote in recognition of his on-field performance. Buffalo has circled the wagons since Hamlin’s heart stopped, and have been rallying around their fallen teammate. The Bills came out swinging in their Wild Card matchup with the Miami Dolphins, but the Fins stood in and took the punches.

MVP candidate Josh Allen appeared to unravel a bit over the course of the game, committing three turnovers (two interceptions, one lost fumble) all on his own. Allen actually fumbled three times against Miami, but Buffalo was fortunate enough to squeak out a victory and move on. The Bills came uncomfortably close to being eliminated prematurely by the Dolphins in their own stadium, and must regain focus.

“At the end of the day, all that matters is winning the game.” Allen is quoted as saying after the ugly win. Although that is true, the Bills need to reawaken the Juggernaut within if they want to pave a pathway that leads to Super Bowl glory in Glendale, AZ.

The last battle between Buffalo and Cincinnati was ultimately ruled a “no contest”, meaning no winner will be declared. Meanwhile, the Bills have won eight straight games and the Bengals have won nine in a row (including the playoffs). Buffalo’s last loss was on November 13, an OT thriller against Minnesota, who won the shootout 33-30. Cincinnati hasn’t been defeated since Halloween night in Cleveland vs the Browns. We are in for a true heavyweight bout this coming Sunday in Orchard Park, NY. Who will advance?

Bengals’ QB Joe Burrow has been everything advertised and more, bringing an unshakeable confidence and swagger that teammates gravitate to. Burrow has led three fourth-quarter comebacks this season, and engineered four game-winning drives. The second coming of “Joe Cool” (Joe Montana is also called this), Burrow has what it takes. However, Burrow has not played particularly well in the last couple of weeks.

Yes, Cincinnati defeated division rival Baltimore 27-16 to end the season, then knocked the Ravens out with a 24-17 Wild-Card win. However, Burrow only threw for a grand total of 424 yards and two touchdowns during the course of those two matchups with Baltimore. Part of that can be credited to the Ravens’ D (third-least points allowed), but Burrow has not seemed “dialed in” as of late. The Bills’ defense ranks second in points allowed per game, so the challenge will only become stiffer for Burrow and the Bengals this weekend against Buffalo.

Additionally, Cincinnati did not dominate in back-to-back games even when facing backup quarterbacks. In Week 18, Anthony Brown was behind center for Baltimore, and in the Wild Card game Tyler Huntley was the Ravens’ starting QB. Brown and Huntley are no Lamar Jackson, and today’s Lamar Jackson is no Josh Allen. To put it bluntly, Buffalo is superior to Cincinnati on both offense and defense, and has home-field advantage in the Divisional Round. There is also an emotional elephant in the room.

The Bills organization has had much more on their minds in recent weeks than just winning football games. That being said, a mentally and physically healthy Buffalo team stacks up well against any other team in the NFL. Are the Bills healthy? No team is healthy at this point in the season, but if Buffalo can block out distractions and zone in on the task at hand, success will follow.

Prediction: The Bengals surprised a lot of people when they reached the Super Bowl (and almost won) last season. No one is caught off guard this time. Cincinnati is a legitimate contender, and this will be a knock down, drag out fight. Burrow vs Allen is worth the price of admission, and the game may need overtime to settle things. Look for the Bills to win by three, ultimately handling their unfinished business vs. the Bengals.