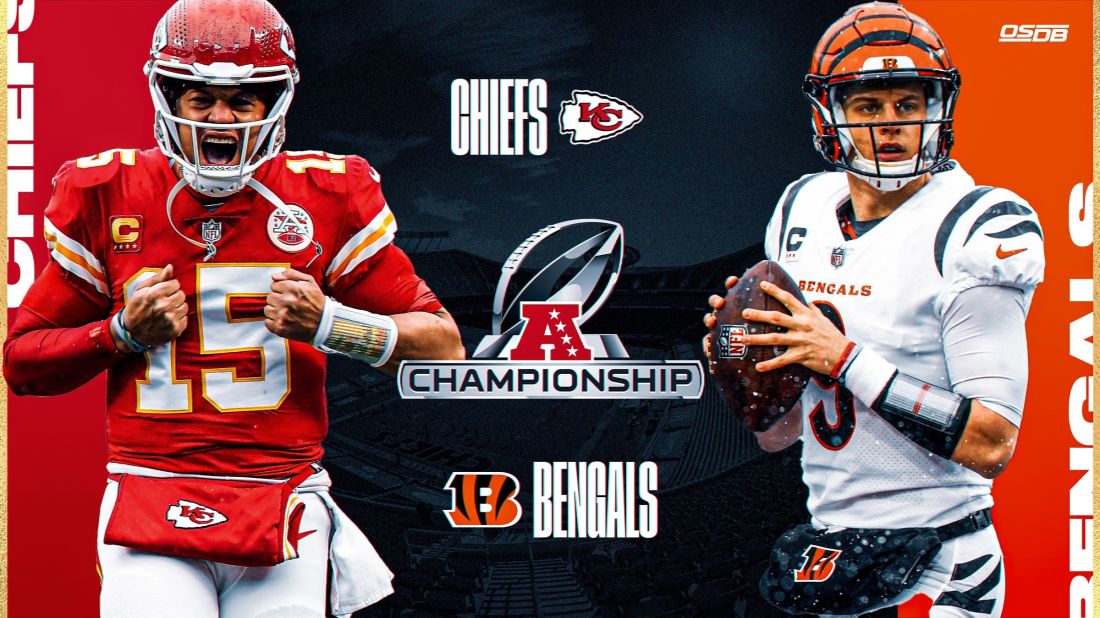 The NFL is down to the final four teams. The Kansas City Chiefs are playing host to the Cincinnati Bengals in the AFC Championship Game for the second straight year.

By the time the Bengals and Chiefs kick off at Arrowhead Stadium on Sunday, the NFC’s Super Bowl representative will already be determined. The San Francisco 49ers and the Philadelphia Eagles have the early game, and the winner will be watching Cincy and KC duke it out with eager anticipation.

The Chiefs survived a spirited Jaguars’ attack in the Divisional Round, as Kansas City limped past Jacksonville 27-20. Superstar QB Patrick Mahomes injured his right ankle towards the end of the first quarter, but surprisingly only missed one series.

Mahomes was visibly limited by the injury, but leaned on RB Isiah Pacheco and his ultimate security blanket, Travis Kelce. Pacheco averaged a whopping 7.9 YPC, gaining 95 rushing yards on 12 attempts, while easing the pressure off of Mahomes.

Kelce reeled in 14 catches for 98 yards and two touchdowns, showing once again that he is the best overall tight end in the league. The 14 catches by Kelce set a new NFL record for most playoff receptions in a playoff game by a tight end. With the victory vs the Jaguars, Mahomes also set a new standard. Mahomes became the first quarterback to lead his team to five conference championship games before the age of 30.

The final feat of greatness to be forged through the Chiefs’ win over the Jaguars on Saturday is a credit to head coach Andy Reid. A longtime coach of both the Eagles and the Chiefs, Reid became the first coach in NFL history to win 10 playoff games with two different franchises.

Reid is one of only three coaches to win a minimum of 20 playoff games during their coaching career. New England Patriots guru Bill Belichick tops the list with 31 playoff wins, with Reid and Dallas Cowboys’ coach Tom Landry tied for second with 20. If Reid’s Chiefs can knock off the Bengals on Sunday, he’ll take sole possession of second place on that elite list. However, Cincinnati has won 10 consecutive contests (including playoffs) and is quite possibly the most complete team in the NFL right now.

Cincinnati faced what was expected to be a difficult task against Buffalo in the Divisional Round, but the Bills inexplicably failed to show up for the game.

In a hostile and frigid environment, the Bengals took immediate control by scoring two first-quarter touchdowns. Bengals’ QB Joe Burrow was cool as a cucumber while dodging snowflakes and defensive schemes in Highmark Stadium. Burrow connected on a 28-yard scoring strike with WR Ja’MarrChase, and followed it with a 15-yard TD pass to TE Hayden Hurst. Chase finished with five receptions for 61 yards and one touchdown.

Buffalo delivered a counterpunch when QB Josh Allen plowed into the end zone for a one-yard score in the second quarter, but it was a short lived spurt of competitive fire. Allen even wanted to fight some of the Bengals’ defensive players after scoring the TD (mostly safety Jessie Bates). Cincinnati remained steady and focused though, never letting Buffalo within legitimate striking distance or anywhere close to taking the lead.

It was Burrow who led the charge early, and then Cincinnati fed Buffalo a steady diet of ground punishment and solid defense. RB Joe Mixon barrelled through the Bills’ D like he was shot out of a cannon, finishing with 105 yards and a TD on 20 carries. Mixon’s one-yard touchdown run late in the third quarter was the play that stole what was left of Buffalo’s collective soul. Cincinnati employed a total team effort, and it paid dividends.

The Bengals dominated the Bills from start to finish, winning 27-10 to freeze Buffalo in time and out of contention. Now Cincinnati travels to “BurrowheadStadium” to face Kansas City for all of the AFC’s marbles and a trip to the Super Bowl in Glendale, AZ.

Who Wins the Rematch? CIN or KC?

Prediction: Cincinnati has Kansas City’s number, and it won in Arrowhead (now “Burrowhead”) in the AFC Championship game last season. The Bengals also defeated the Chiefs in Week 13 of the regular season by a score of 27-24. Cincinnati’s defense frustrated a healthy Mahomes in that game, and will be all over the hobbled MVP frontrunner in the Conference Championship Round.

In Week 13, Burrow outperformed Mahomes, completing 25-of-31 passes for 286 yards and two scores. “Joe Cool” also ran in for a touchdown, helping to make up for the absence of Mixon in that game. Backup RB SamajePerine picked up the bulk of Mixon’s slack, running for 106 yards on 21 carries while catching six passes for 49 yards.

The Bengals are peaking at the right time, and Mahomesis not anything close to 100%. Expect Mahomes to play a heroic game in a losing effort for Kansas City. Cincinnati advances to play in the Super Bowl for the second straight season.