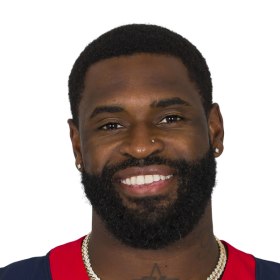 During high school, he was a two-way standout at Dunnellon where he rushed for 500 yards and registered 53 tackles, six interceptions and three pass breakups during his junior season, split his time between receiver and cornerback as a senior, earned a three-star rati...

During high school, he was a two-way standout at Dunnellon where he rushed for 500 yards and registered 53 tackles, si...

During high school, he was a two-way standout at Dunnellon where he rushed for 500 yards and registered 53 tackles, six interceptions and three pass breakups during his junior season, split his time between receiver and cornerback as a senior, earned a three-star rating from Rivals and Scout.com, No. 90 player in the state from SuperPrep 115, No. 85 according to Rivals and No. 83 by Scout.com, No. 21 cornerback prospect per ESPN, boasted 31-inch vertical and 4.44 40-yard dash time out of high school, participated in the FACA North-South All-Star game, member of Florida Times-Union Super 75 and rated the No. 7 cornerback in the state. Orlando Sentinel's Bill Buchalter rated him as the No. 14 corner prospect in Florida and was selected Florida State over Miami, Notre Dame, Cincinnati, Ole Miss, Mississippi State, Purdue, Rutgers, USF and UCF.

Through 2010, he was a true freshman defensive back who played mostly on special teams, credited with a tackle and pass breakup against Samford and added another tackle against Virginia Tech in the ACC Championship Game.

For the 2011 season, he played as a backup defensive back who served as FSU's sixth defensive back in its dime package, playing in 11 games and tallied 17 tackles, five pass break-ups and one interception, made a career-best three tackles three times in games against Charleston Southern, Duke and Florida, picked the best time for his first career interception when he picked off Notre Dame's Tommy Rees in the end zone to clinch the win for the Noles in the Champs Sports Bowl and earned an academic award at the annual team banquet.

For the 2012 season, he started all 14 games for FSU at free safety, he was the top tackler in the secondary with 52 which ranked fifth on the team, one of six Seminoles who recorded an interception in 2012, set career bests for tackles, tackles for loss, games played, games started and forced fumbles, was sixth on the team with four pass break-ups, also forced one fumble, grabbed interceptions against NC State and Northern Illinois, which was his second postseason INT in his career, played two of his most productive games versus FSU's two highest-ranked opponents, set a career-high with 12 tackles in the win over then-No. 10 Clemson as he posted double digit tackles for the first time in his career, closed the regular season by recording his second-best tackle total with eight against No. 4 Florida, recorded a tackle in 13 of 14 games and registered a tackle in 12 straight games, first career start came in the season opener and started every game since after spending most of 2011 playing in dime packages.

On 2013, as a senior, he joined with Lamarcus Joyner in key leadership roles on both the defense and the team overall, he got credited for helping instill a level of maturity that has helped lead FSU into the BCS National Championship Game, had an incredibly high football IQ to go along with his natural ability, reached 50 tackles for the second straight season, good for fifth on the team, came into the season with 1.5 career TFL and added 7.0 to that total this year, the fourth-most on the team, recorded his fourth career interception late in 2nd quarter at Pitt that allowed FSU to score a TD and head into halftime with a 28-10 lead, made five tackles and tied a career high with 2.0 TFLs at Florida, recovered a fumble on the first play of the game at Clemson that ended up in a TD quieting the crowd and setting the stage for FSU's 51-14 win, intercepted a pass on the second play of the game against NC State; finished with two tackles, 1.0 TFL, an INT, a pass break-up and a forced fumble, tied for second on the team with seven tackles at Boston College - including a career-high 2.0 tackles for loss, registered his first career sack and finished with six tackles against Miami, leader on nation's top-rated pass defense (156.6 ypg), also helped the `Noles lead the nation in scoring defense (12.1 ppg) and interceptions (26), and ranked third in total defense (281.4 ypg), competed in the Senior Bowl.

He was drafted by the Baltimore Ravens in the third round of the 2014 NFL Draft. Brooks has spent time with the Baltimore Ravens and the Philadelphia Eagles but did not play for them. On August 27, 2017, Brooks was traded to the New York Jets in exchange for cornerback Dexter McDougle. In Week 3, Brooks recorded two interceptions, one-off quarterback Jay Cutler and the other off Matt Haack, and three passes defensed, helping the Jets earn their first win in a 20–6 victory over the Miami Dolphins, earning him AFC Defensive Player of the Week.