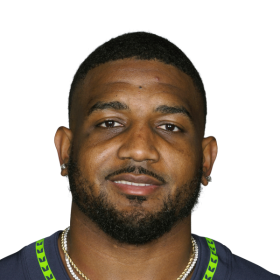 Diggs attended Angleton High School where he was a prep All-American, two-time all-state and four-time all-district selection at multiple positions. He played in the 2011 Under Armour All-American Game and was a member of ESPNU’s top 150 national prospects. He was ranked as the best cornerback and...

Diggs attended Angleton High School where he was a prep All-American, two-time all-state and four-time all-district selection at multiple positions....

Diggs attended Angleton High School where he was a prep All-American, two-time all-state and four-time all-district selection at multiple positions. He played in the 2011 Under Armour All-American Game and was a member of ESPNU’s top 150 national prospects. He was ranked as the best cornerback and 21st-best overall prospect by ESPNU and was rated as the third-best athlete by Dave Campbell’s Texas Football. Diggs was a member of the Sporting News’ top 100 national prospects and was a four-year starter who finished his career with 8,265 all-purpose yards and 83 TDs on offense, rushing for 4,409 yards and 58 TDs, passing for 1,938 yards and 11 TDs, catching 10 passes for 301 yards and three TDs and returning 75 kicks for 1,617 yards and 11 TDs. He totaled 237 tackles, 19 TFL, six sacks, 10 INTs, 52 PBUs, 11 forced fumbles, four fumble recoveries, seven blocked kicks and returned four INTs and three blocked kicks for scores on defense in his career, helping Angleton compile a 30-17 record and being named as a first-team 4A all-state at kick returner and second-team all-state on defense by the Texas Sports Writers Association as a senior.

As a junior, Diggs helped lead Angleton to a 7-4 record and the state playoffs, passing for 829 yards and five TDs, rushed for 1,207 yards and 17 TDs and caught a 61-yard TD and also recording 69 tackles, seven TFL, one sack, three INTs, 16 PBUs, four forced fumbles, one fumble recovery, three blocked kicks, returned one INT 69 yards for a TD and returned one blocked extra point for a score on defense. He also returned 11 punts for 326 yards and three TDs while returning 10 kickoffs for 350 yards and two TD and earned second-team all-state honors as a kick returner from the Texas Sports Writers Association. As a sophomore, he was named the district 24-4A Offensive MVP and Special Teams Player of the Year where he helped lead Angleton to an 11-2 record, a district championship and an appearance in the third round of the state playoffs. As a freshman, Diggs earned second-team all-district 23-4A honors on defense after helping lead Angelton to a 9-4 record, a co-district championship and an appearance in the third round of the state playoffs.

After he finished high school, Diggs committed to the University of Texas where as a freshman in 2011, he played in all 13 games with 11 starts on the season and was a CBSSports.com Freshman All-American. He was a Big 12 Defensive Freshman of the Year by Coaches, second-team All-Big 12 by Coaches and was an honorable mention by AP. Diggs tied a school freshmen record with his team-high four interceptions to go with 51 tackles, where 33 of them were solo, four tackles for loss, 15 pass breakups, and two caused fumbles while returning 19 kickoffs for 371 yards and nine punts for 181 yards. He helped Texas lead the Big 12 and rank sixth in the nation in rushing defense with 96.23 yards per game, 11th in total defense with 306.08 and also ranked 10th in pass efficiency defense 111.0. As a sophomore in 2012, Diggs started all 13 games at cornerback and tied for sixth in the Big 12 and tied for 39th nationally in interceptions per game with 0.31. He also tied for 12th in the league and tied for 88th in the FBS in passes defended with 0.85 pg and tied for fourth in the team solo stops with 39 and tied for sixth in total tackles with 59. He led the team in interceptions with 4 and pass breakups with 7 and had seven games with five or more tackles. He was named to the CFPA Punt Returner Trophy watch list and was tabbed preseason All-America and first-team All-Big 12 by Athlon.

As a junior in 2012, Diggs played in all 13 games, with starts in all but one against Kansas State at cornerback/nickel. He was first on the team in pass breakups with 10, was an honorable mention All-Big 12 selection by the coaches and was a preseason third-team All-America selection by Athlon and Sporting News. He was named to the Nagurski Trophy, Thorpe Award and CFPA Defensive Awards watch lists and was a preseason first-team All-Big 12 pick by Sporting News and league media. He was also a second-team all-league choice by Athlon and Lindy’s. In his senior year in 2013, Diggs started all 13 games at cornerback/nickel and was a first-team All-Big 12 choice by ESPN.com and second-team pick by The Associated Press and the league’s coaches. He tied for second on the team with three interceptions and third in pass breakups with 5, tied for fourth on the team with a career-high 73 tackles and also tied for fourth on the team in special teams tackles with 4.

After he graduated from college, Diggs entered the 2015 NFL Draft where he was selected in the sixth round by the Detroit Lions. On May 7, 2015, the Detroit Lions signed Diggs to a four-year contract and was named as the backup Nickelback, behind Nevin Lawson, to begin the regular season. He made his professional regular-season debut in the Lions season-opener at the San Diego Chargers and recorded two solo tackles in their 33–28 loss where he made his first career tackle on Keenan Allen, stopping a five-yard reception in the fourth quarter. On October 23, 2015, Diggs earned his first career start and recorded four combined tackles in their 28–19 loss to the Minnesota Vikings in Week 7. Diggs finished his rookie season with 38 combined tackles, where 31 of them were solo, and six pass deflections in 16 games and four starts and finished the season with the 33rd highest overall grade from Pro Football Focus. In 2016, Diggs was named the first-team Nickelback and third cornerback on the depth chart to start the season, behind Darius Slay and Nevin Lawson. He finished the 2016 season with 44 combined tackles, where 40 of them were solo and had a pass deflections in 12 games and four starts. He earned an overall grade of 49.5 from Pro Football Focus in 2016 and ranked 95th among the 111 qualifying cornerbacks.

In 2017, Diggs was named the first-team Nickelback on and the fifth cornerback on the Lions depth chart, behind Darius Slay, Nevin Lawson, Teez Tabor, and D.J. Hayden, to start the season. He started in the Lions season-opener against the Arizona Cardinals and made a season-high three pass deflections and three solo tackles in their 35–23 victory. On December 3, 2017, Diggs started his first game as a strong safety and collected five solo tackles and a pass deflection during a 44–20 loss at the Baltimore Ravens in a Week 13. In Week 14, he collected seven combined tackles, deflected a pass, and made his first career interception off a pass by quarterback Jamies Winston during a 24–21 victory at the Tampa Bay Buccaneers and the following week against the Chicago Bears, he recorded three solo tackles, two pass deflections, an interception and his first career sack on quarterback Mitchell Trubisky during the second quarter. Diggs finished the 2017 season with a career-high 55 combined tackles, where 45 of them were solo, nine pass deflections, three interceptions, and a sack in 16 games and 11 starts and he was given an overall grade of 73.5, ranking him 73rd among all qualifying cornerbacks in 2017 by Pro Football Focus. On September 3, 2018, Diggs signed a three-year contract extension where on September 10, in the season opener on Monday Night Football, Diggs intercepted Sam Darnold's first career pass attempt and returned it 37 yards for a touchdown in a game against the New York Jets. 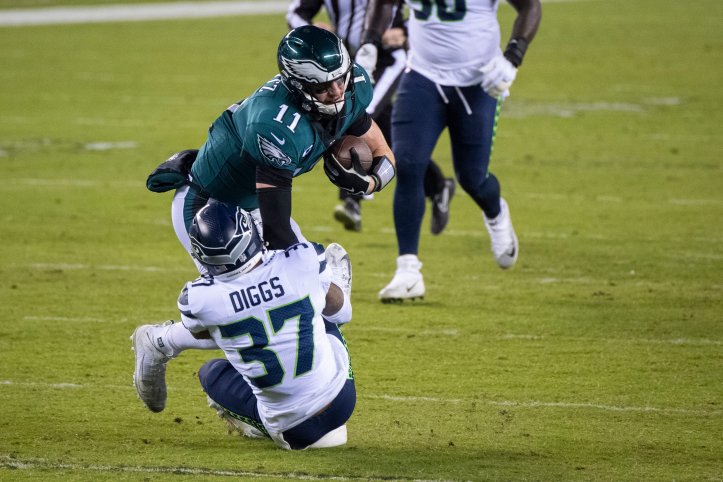 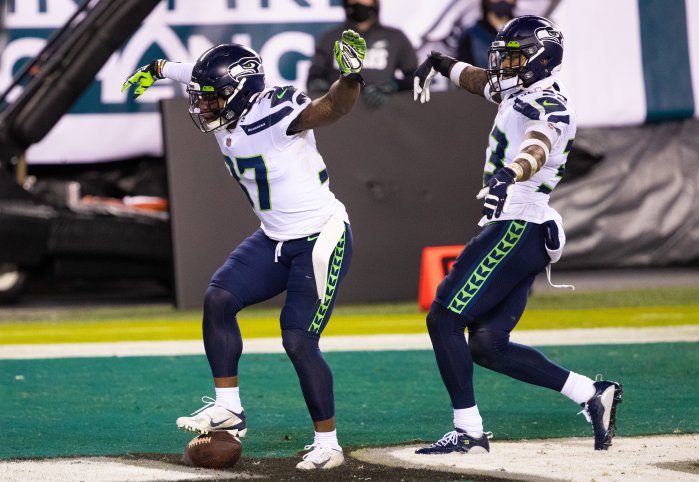 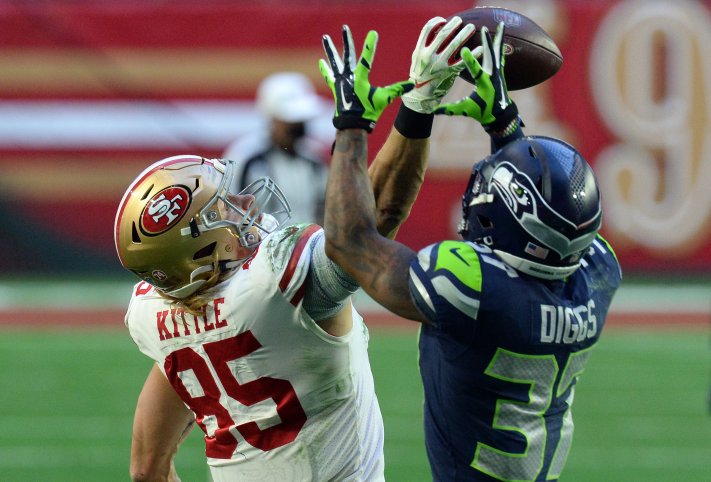 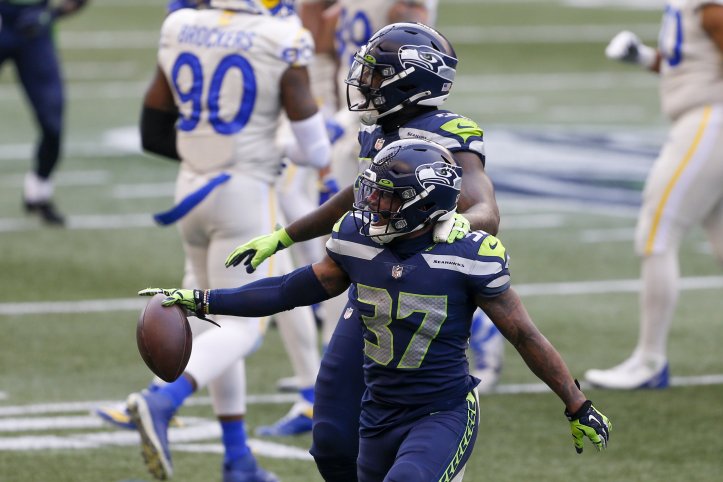 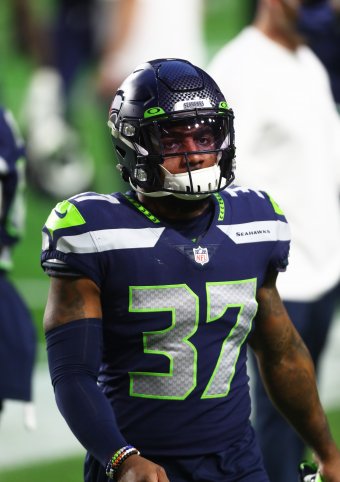 Prayers up for Fred!