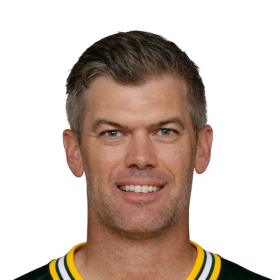 To support military, he has participated in the send off of the local Bravo 127th, he played an Xbox game with a soldier overseas in the “Pro vs. GI Joe” challenge and in February 2010, he went aboard the USS John C. Stennis, a nuclear-powered Navy supercarrier, to watch Super Bowl XLIV with more than 2,000 sailors.

Crosby was the co-chairman of the Lombardi Charity Classic.

Crosby attended the University of Colorado Boulder, where he played on the Colorado Buffaloes football team from 2003 to 2006. While enrolled at Colorado, he displayed extraordinary leg strength, making a school-record 60-yard field goal against Iowa State in 2004. Crosby’s 5...

Crosby attended the University of Colorado Boulder, where he played on the Colorado Buffaloes football team from 2003 to 2006....

Crosby attended the University of Colorado Boulder, where he played on the Colorado Buffaloes football team from 2003 to 2006. While enrolled at Colorado, he displayed extraordinary leg strength, making a school-record 60-yard field goal against Iowa State in 2004. Crosby’s 58-yard field goal against Miami in 2005 was the longest ever kicked in NCAA Division I-A football at sea-level without a tee. In all, Crosby holds 31 school records. Crosby connected on 66 of 88 field goals in total during his college career, and 30 of 34 inside 40 yards.

He developed a reputation for kicking in the clutch, making 12 of 13 field goals in the fourth quarter, and a perfect 10/10 in the final 8½ minutes of games. This bent was most evident when Crosby played rival Colorado State University, against which Crosby made kicks of 55 (2004), 48, and 47 yards (2005) in consecutive years to win the Rocky Mountain Showdown.

Crosby also served as the Buffaloes' kickoff specialist, where his knack for forcing touchbacks after touchdowns made him a fan favorite. Overall, 138 of Crosby's 203 career kickoffs were touchbacks, including an 87-yard kickoff touchback from the 20-yard line against Iowa State in 2004. The Sporting News named Crosby to its All-Decade team for the first nine years of the 2000s (decade).

Crosby was a first-team All-Big 12 selection in 2004, 2005, and 2006. Following his junior season in 2005, he was recognized as a unanimous first-team All-American, having received first-team honors from the Associated Press, the Football Writers Association of America, The Sporting News, and Walter Camp Football Foundation. As a senior, he was again selected as a first-team All-American by Pro Football Weekly and the Walter Camp Football Foundation. He was the runner-up for the Lou Groza Award, despite being heavily favored to win. During his senior season, he became the first player in Big 12 Conference history to be named player of the week eight times, and became Colorado's all-time leading scorer, with 308 career points.

Crosby was chosen by the Green Bay Packers in the sixth round (193rd overall) of the 2007 NFL Draft, the last of three consecutive picks for the Packers, and the third kicker overall. Crosby entered training camp in a battle with incumbent placekicker Dave Rayner. During Green Bay's first pre-season game against the Pittsburgh Steelers, Crosby kicked a 52-yard field goal, the longest field goal in the history of Heinz Field. Crosby won the starting job during the final roster cut.

In his first regular season game, Crosby converted all three field goals he attempted, including a 53-yarder and a 42-yard kick with two seconds left on the clock to help the Packers defeat the visiting Philadelphia Eagles. The kick was the first game-winner by a rookie on opening weekend since 1979 (when Matt Bahr achieved the same feat). Crosby was the first player in NFL history to kick a 50-yard field goal and a game-winning field goal with under a minute remaining in his NFL debut. Crosby was named NFC Special Teams Player of the Week (the first rookie kicker to receive this honor on opening weekend).

Crosby was awarded the NFC Special Teams Player of the Month for November 2007. He led all NFL kickers with 54 points and tied for the lead with 12 field goals as the Packers posted a 4-1 mark. Crosby converted 12 of 15 field goals during November and was a perfect 18-for-18 on PATs. He had at least one field goal in every game, including four in the Week 9 win at Kansas City. His longest field goal of the month was a 52-yarder in the Week 13 contest at Dallas. For the 2007 season, Crosby led the NFL with 130 points scored and his 24 field goals ranked first in the NFC. Crosby finished second for most points scored in a season by a rookie (Kevin Butler had 144 points for Chicago in 1985). Crosby finished 2007 with the highest-scoring season by a kicker in franchise history and third-highest season point total by any Packers player.

In the first game of the 2010 regular season against the Eagles, Crosby kicked a field goal from 56 yards in the last seconds of the first half, his career long and a franchise record. At the end of the 2010 season, Crosby and the Packers appeared in Super Bowl XLV against the Steelers. In the 31–25 victory, he converted all four extra point attempts and his only field goal attempt. 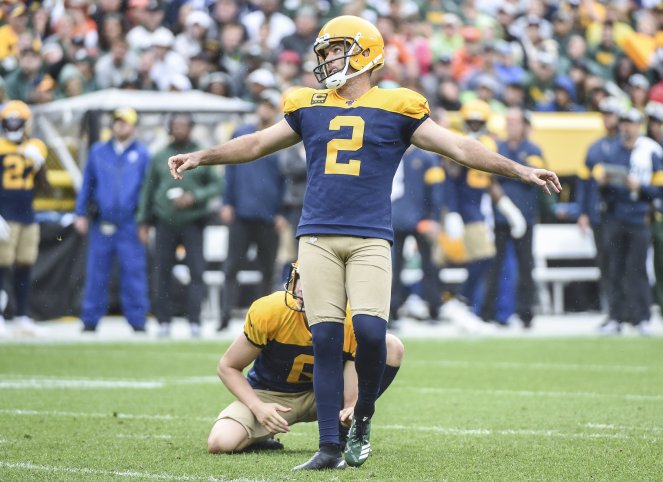 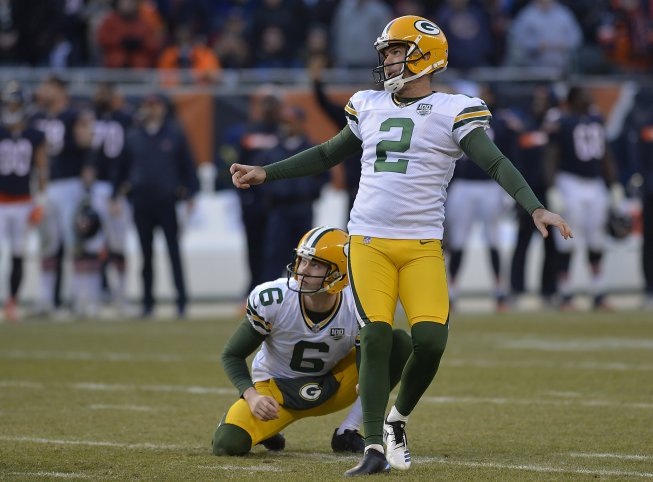 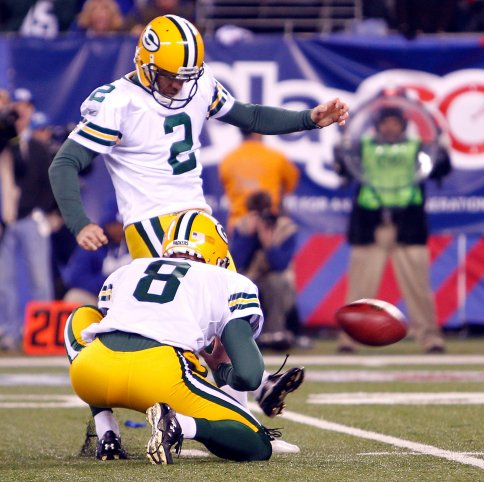 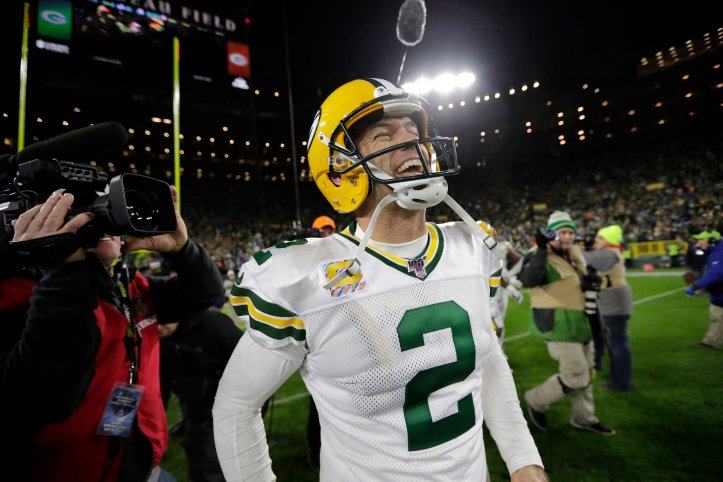 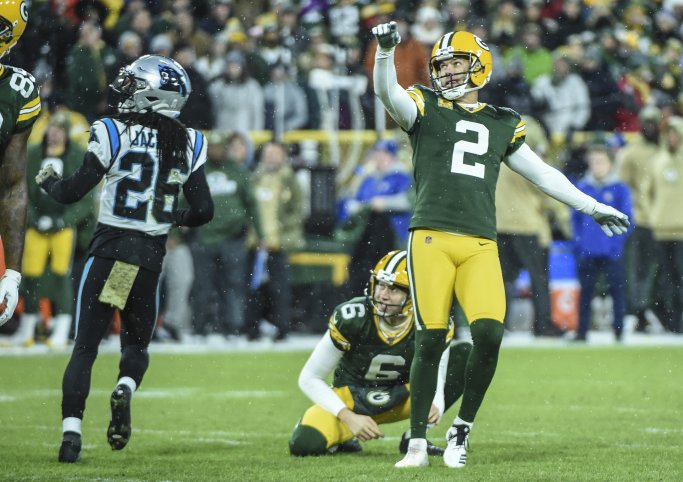 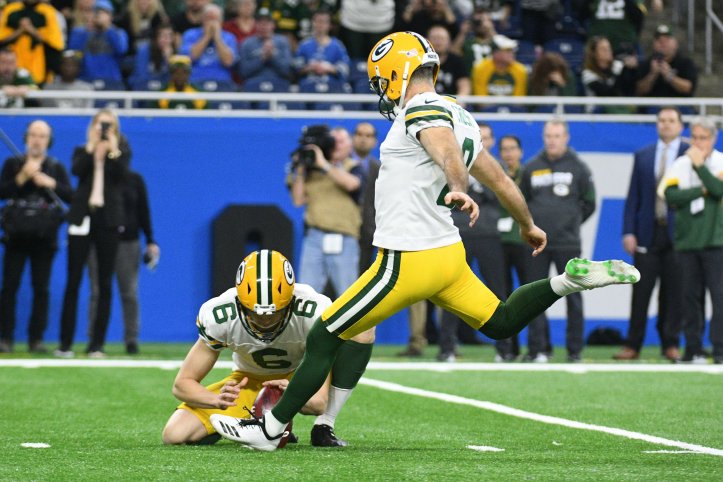 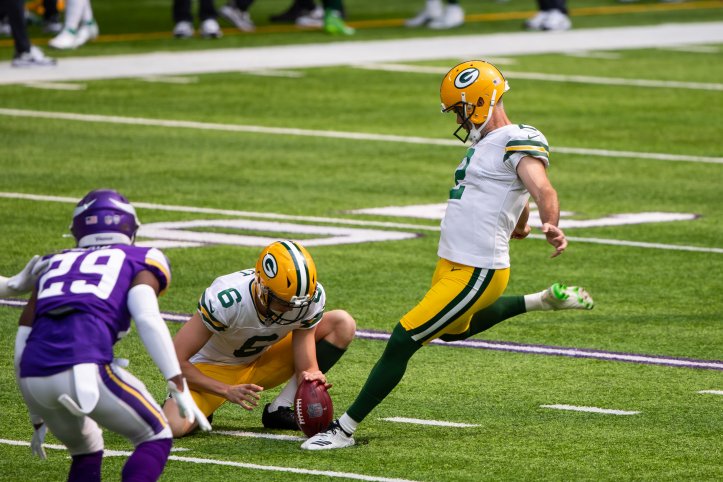 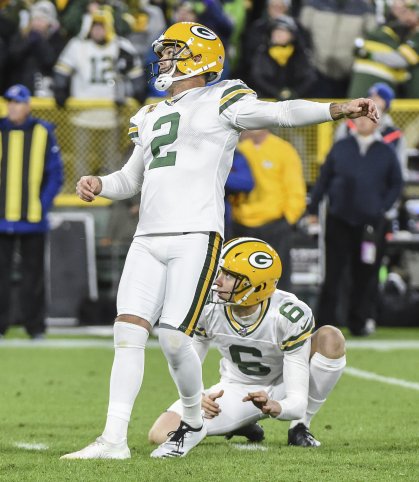 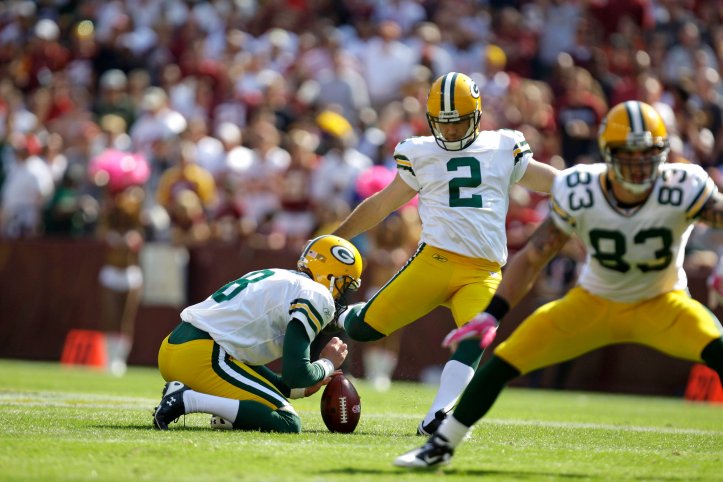 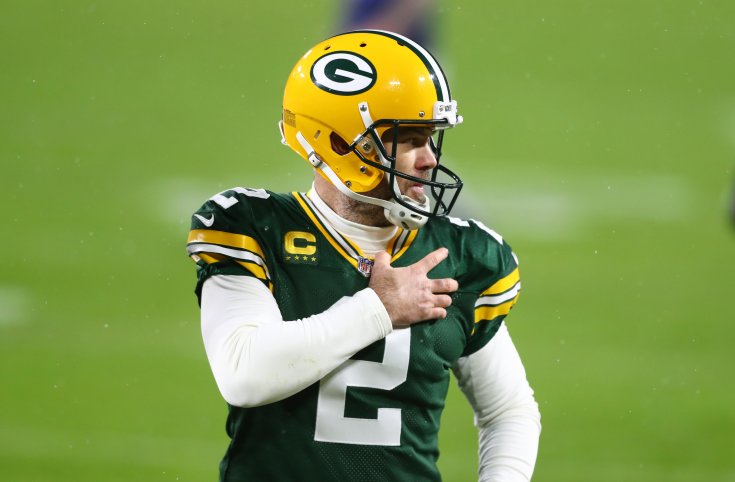