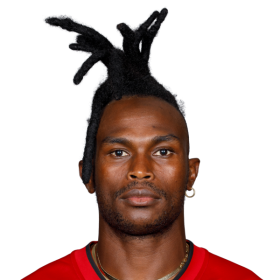 Jones isn’t, nor has he ever been, in the military but he proudly supports the men and women who serve the United States in uniform. “A big part of what’s so great about America is the men and women who sacrifice daily, so we can live our lives and feel safe,” Jones said in 2013 while taking part in a Wounded Warrior luncheon. Sponsored by the USAA and NFL, the event saw players from the league meet, sign autographs, and take photos with Purple Heart recipients and combat-wounded soldiers. “That event was so impactful because it gave me an opportunity to praise those guys that go out there and fight for our country every day,” Jones said. Like so many of his colleagues, Jones sees the importance in setting a good example to kids. “I’m trying to impact the youth,” Jones said in 2013. “I try to lead by example, always keeping my nose clean and staying out of trouble, because I know kids are looking up to me; I want to be the best example I can be for them.”

get involved
Huddle Up for Miracles

As a rookie in 2011, Jones immediately acclimated himself to Atlanta and it’s residents as he participated in several charitable events initiated by the Atlanta Falcons Rookie club. When then-Falcons head coach Mike Smith hosted the 4th annual Huddle Up for Miracles in 2013, Jones served as a celebrity waiter and helped raise over $250,000 for the Children’s Miracle Network and Children’s Healthcare of Atlanta. And in 2012, the star wideout literally shed his hair for charity. Seeing an opportunity to help sick children, Jones donated his dreadlocks to Locks for Love, which makes wigs for kids with cancer.

The talented receiver helped pack grocery bags full of fruits and veggies and delivered them to the less fortunate people of his adopted hometown. “It’s really good just to see people get excited,” he said. “Just being around that positive energy, hanging out and talking with them for a little bit to really get to know them and see what their life story is and serve them and help them and be an inspiration to them.”