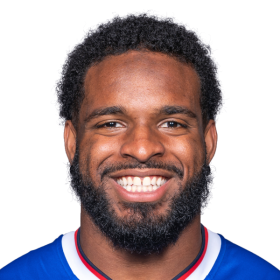 Prior to Duke, he was a three-year letterman at St. Joseph Regional High School under coaches Tony Karcich (2012-13) and August Hoffmann (2014). He was rated as the No. 42 outside linebacker in the country by Rivals.com ...

Prior to Duke, he was a three-year letterman at St. Joseph Regional Hi...

Prior to Duke, he was a three-year letterman at St. Joseph Regional High School under coaches Tony Karcich (2012-13) and August Hoffmann (2014). He was rated as the No. 42 outside linebacker in the country by Rivals.com and helped the Green Knights to two New Jersey State Interscholastic Athletic Association (NJSIAA) Non-Public Group 3 state championships as a sophomore and junior and a semifinal trip during the final campaign. As a sophomore, he carded 72 tackles during NJSIAA state championship campaign, as a junior, he led team to a 10-1 mark and state title by posting 58 tackles, 3.5 sacks, four INTs, and two fumble recoveries, the team captured NJSIAA state title with a 62-14 victory against Pope John XXIII, he blocked two punts in the championship tilt, was named Second-Team All-State after junior season. Following his senior year, he received First-Team All-League, All-County, All-Metro, and All-State honors, registering 95 tackles, 3.0 sacks, four INTs, two caused fumbles and two fumble recoveries, on offense as a senior, he added 24 receptions for 315 yards and two TDs. He also lettered in lacrosse and basketball.

At his first year on college in 2015, he did not see game action. For the 2016 season, he won First-Team Freshman All-America pick by Athlon Sports, Campus Insiders and USA Today, got honorable mention All-ACC pick by both the head coaches and Atlantic Coast Sports Media Association, had First-Team Freshman All-ACC pick by Athlon Sports, Academic All-ACC selection, ACC Linebacker of the Week following the win over North Carolina, finished second in the balloting for ACC Defensive Rookie of the Year by the Atlantic Coast Sports Media Association, and was co-recipient with Ben Humphreys of the program’s Vincent Rey Award as Duke’s most outstanding linebacker. He started all 12 games, recorded 107 tackles, 9.5 TFL, 4.0 sacks, one INT, two PBUs, one fumble recovery, and four QB pressures, in the ACC, he ranked fourth in tackles per game (8.97) and ninth in total tackles, and he led all ACC rookies in total tackles.

Nationally, Giles-Harris ranked tied for 40th in tackles per game, among freshmen nationally, he ranked second in tackles per game, trailing only Bryan London of Texas State. On Duke’s single-season charts, he posted the third-highest total for tackles by a freshman and the fifth-best total for TFL by a freshman, had 4+ tackles in 11 games, averaged 11.0 tackles per game in ACC play, reached double figures in tackles against North Carolina (16), Wake Forest (15), Miami (13), Virginia Tech (13) and Virginia (12), averaged an ACC-best 12.00 tackles per game in the month of November, registered at least one TFL in nine games and logged a season-high 2.0 TFL in the season-opener against N.C. Central, both INT and fumble recovery came against Wake Forest, he posted single-game sacks versus N.C. Central, Northwestern, Louisville and Virginia Tech and led Duke in tackles with nine including a sack of eventual Heisman Trophy recipient Lamar Jackson as the Blue Devils held Louisville to 34 points and 190.2 total offensive yards below its season averages entering the contest.

During 2017, he won All-America selection by Walter Camp Foundation (2nd team), CBS Sports (3rd), Phil Steele (3rd) and College Football News (HM), First-Team All-ACC pick, recipient of the program’s Carmen Falcone MVP award as Duke’s most outstanding player as well as the Vincent Rey Award as the team’s top linebacker, and ACC Player of the Week honoree following performance at Virginia. He started all 13 games, compiled 125 tackles, 16.0 TFL, 4.5 sacks, one INT, four PBUs, one caused fumble, and nine QB pressures, in the ACC, he ranked third in total tackles, third in tackles per game (9.62), fourth in TFL and fourth in TFL per game (1.23), led all ACC LBs in TFL, nationally, he ranked 19th in tackles per game and tied for 28th in TFL per game, tackle total matched the 29th-highest single-season total in Duke history, his TFL total equaled the 10th-best single-season total in Blue Devil history and became the first player in Duke history to register 125+ tackles and 16.0+ TFL in a single campaign.

Giles-Harris became the third player in school history to record 100+ tackles in both freshman and sophomore seasons, joining Carl McGee (1975-76) and Erwin Sampson (1988-89), was one of three players nationally to post 125+ tackles and 15.0+ TFL, joining Joe Dineen of Kansas and Dalton Herrington of New Mexico State, posted 10+ tackles in five weeks including a season-high 15 stops at Virginia, added 3.5 TFL, 1.0 sack, one PBU, one caused fumble and two QB pressures against the Cavaliers, also reached double figures versus Baylor (12), Virginia Tech (11), Army West Point (10) and Georgia Tech (14), logged nine stops against Miami and Florida State, had 6+ tackles in all 13 games and 8+ stops in 11 weeks, recorded multiple TFL against N.C. Central (2.0), Baylor (2.5), North Carolina (1.5), Virginia and Pittsburgh (3.0), had at least one TFL in 10 games, lone INT of the season came versus Baylor, coupled with teammates Tre Hornbuckle (9.5), Mike Ramsay (9.5) and Ben Humphreys (9.0) to make Duke one of four teams in the ACC to have 4+ players with 9.0+ TFL, joining Florida State, Miami and Virginia Tech and was on the field for 855 snaps.

Through 2018, Giles-Harris won First-Team All-ACC pick, Academic All-ACC selection, ACC Linebacker of the Week following victory at Georgia Tech and co-recipient with Ben Humphreys of the program’s Vincent Rey Award as Duke’s most outstanding linebacker. He played in and started nine games, missing the final four games of the campaign due to a knee injury, he recorded 81 tackles, 7.0 TFL, 1.0 sack, two PBUs and two QB pressures, had 4+ tackles in eight games and 10+ in four tilts with a year-high 15 at Georgia Tech, averaged 10.80 tackles per game in ACC play, reached double figures in tackles against Northwestern (10), Georgia Tech (15), Pittsburgh (10) and Miami (12), booked 34 tackles in October, the second-most in the ACC, contributed a year-high 2.0 TFL against Virginia and combined to make 5.0 TFL against the Cavaliers, Pittsburgh and Miami, registered at least one TFL in six contests, blocked first career field goal against the Hurricanes, helping Duke to its first win at Miami since 1976, both PBUs and QB pressures came in Duke’s 21-7 victory at Northwestern and he posted single-game sacks versus Northwestern and Miami, being on the field for 638 total snaps.

He was signed by the Jacksonville Jaguars as an undrafted free agent on April 27, 2019. 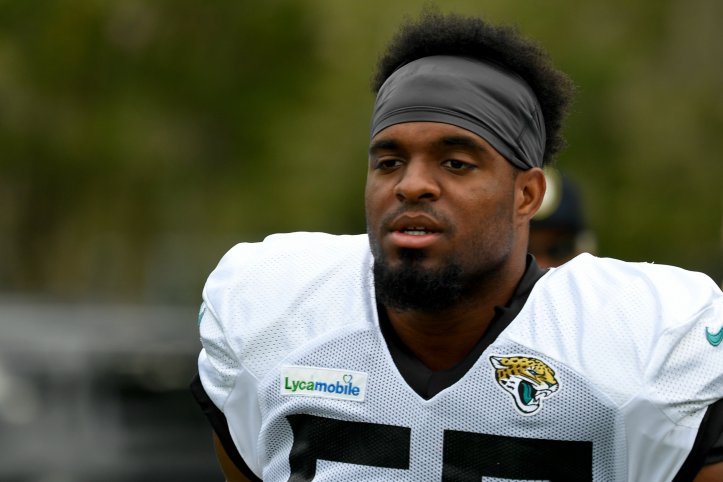 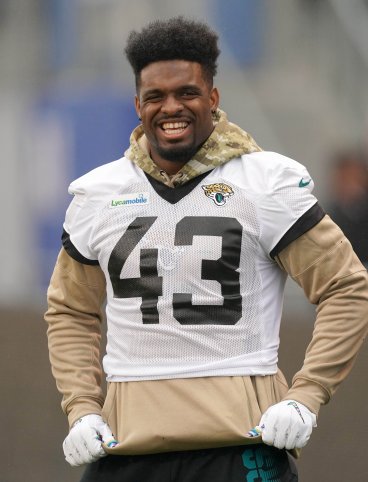 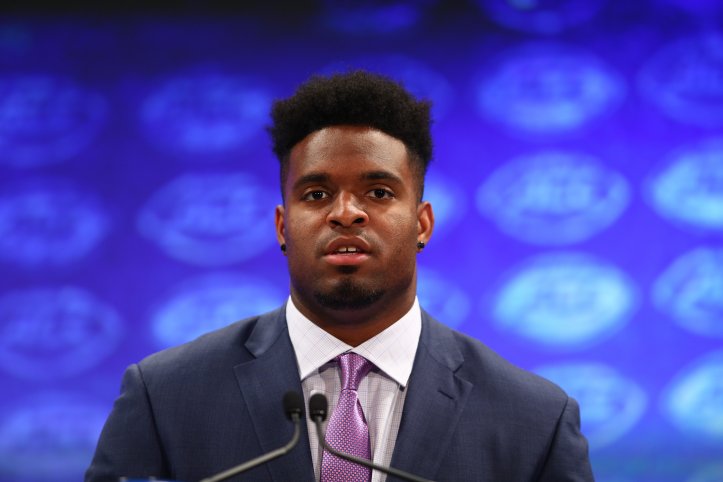 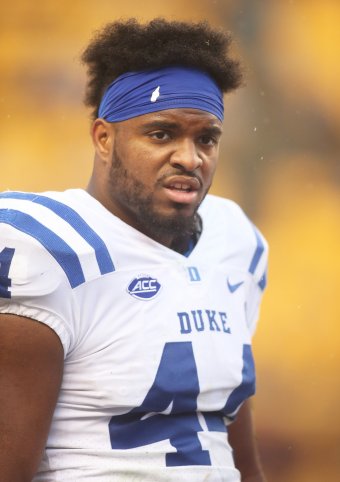