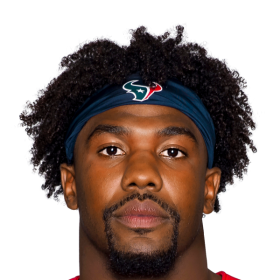 Hughes aided in hurricane relieve significantly. He wrote, "Fellow Houstonians and Bills Mafia: What is happening in my home city of #Houston is completely devastating and heart-wrenching. Watching this crisis from so far away makes me feel helpless, so I want to do whatever I can to help the victims impacted by this tragedy. I will be donating $25,000 to Mayor Sylvester Turner's Hurricane Harvey Relief Fund. Additionally, I will give $5,000 for each sack I record. I hope and pray my teammates, friends, and fans will join me in making a donation as well. Any amount matters in this time of need!

Hughes received three varsity letters in football while attending Austin High School in Fort Bend County, Texas, where he played running back. As a senior in 2006 Hughes rushed for 1,412 yards and totaled 19 touchdowns to capture First-team All-District 20-5A honors. Hughes also earned Fir...

Hughes received three varsity letters in football while attending Austin High School in Fort Bend County, Texas, where he played running back. As a senior in 2006 Hughes rushed for 1,412 yards and totaled 19 touchdowns to capture First-team All-District 20-5A honors. Hughes also earned First-team All District as a kick returner. Hughes also lettered in baseball where he played third base and pitcher. Considered only a two-star recruit out of high-school by recruiting service Rivals.com, Hughes failed to draw a lot of attention and only received a few scholarship offers. He picked TCU over Iowa State, Arizona State and North Texas.

Hughes accepted an athletic scholarship to attend Texas Christian University, and played for coach Gary Patterson's TCU Horned Frogs football team from 2006 to 2009. Patterson recognized Hughes' natural athleticism and assigned him jersey number 98, usually reserved for defensive linemen. Before the season, Patterson worked Hughes in at defensive end, and he was able to earn playing time there as a freshman. Once at TCU, Hughes was one of just four true freshmen to play for the Horned Frogs in 2006. He recorded his first career sack in a 31-17 win over Army. He played in all 13 games as sophomore in 2007, and recorded at least one tackle in each of those contests. Taking over as a full-time starter as a junior in 2008, Hughes recorded 15 sacks, 18.5 tackles for a loss, 6 forced fumbles, 2 interceptions and returned one of those picks for a touchdown. He led the nation with his 15 sacks. He garnered first-team All-Mountain West Conference (MWC) and MWC Defensive Player of the Year honors, and was recognized as a consensus first-team All-American. In 2009 Hughes had a career-high 54 tackles and 11.5 sacks (tied for 7th in NCAA). That season, the Horned Frogs ranked first in total defense, allowing just 233 yards per game and were sixth in the nation with 12.4 points allowed per game. He was a first-team All-Mountain West selection again, and was recognized as a unanimous first-team All-American.

Additionally, he was named the MWC Defensive Player of the Year for the second time in two years. His career totals now include 28.5 sacks, 139 total tackles, 39 tackles-for-loss and seven forced fumbles. Hughes earned his bachelor's degree in communications from TCU in 2010.

He finished the 2012 season by appearing in all 16 games with six starts recording 32 tackles, one pass defended, and four sacks.

On April 29, 2013, the Colts traded Hughes to the Buffalo Bills for linebacker Kelvin Sheppard. Hughes finished his first season with the Bills by making 46 tackles, 10 sacks and two forced fumbles in 16 games with one start. He was also named to the USA Today All-Joe Team. On March 9, 2015, the Buffalo Bills and Hughes agreed to a five-year contract worth at least $45 million. He played through the majority of the 2015 season with a chipped bone in his left wrist as a hybrid LB/DE . In 2016, as the Bills more fully committed to a 3-4 scheme, Hughes was moved from defensive end to outside linebacker. On May 21, 2019, Hughes signed a two-year contract extension with the Bills. In the AFC Wild Card game against the Houston Texans, Hughes sacked quarterback Deshaun Watson 3 times during the 22–19 overtime loss. In Week 7 of the 2020 season against the New York Jets, Hughes recorded six tackles, two sacks, a forced fumble, and the game sealing interception late in the fourth quarter during the 18–10 win, earning AFC Defensive Player of the Week. In Week 15 against the Denver Broncos, Hughes recovered a fumble forced by teammate Tre'Davious White on Drew Lock and returned it for a 21 yard touchdown during the 48–19 win. In the Divisional Round of the playoffs against the Baltimore Ravens, Hughes recorded two sacks on Lamar Jackson during the 17–3 win. In the AFC Championship against the Kansas City Chiefs, Hughes recorded one sack on Patrick Mahomes during the 38–24 loss. 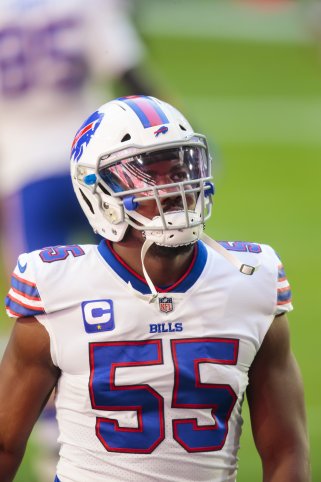 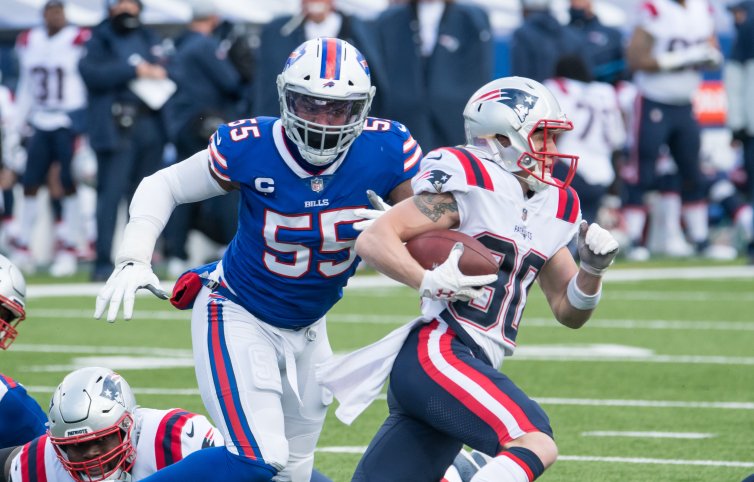 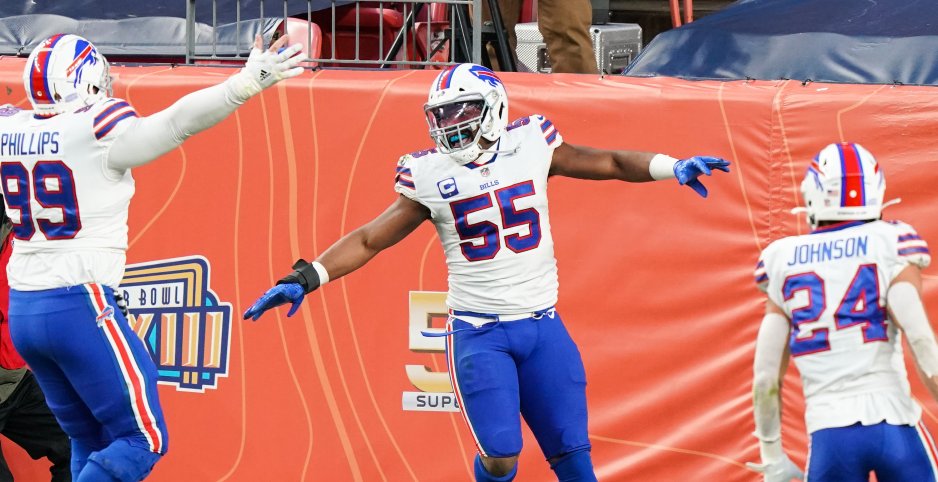 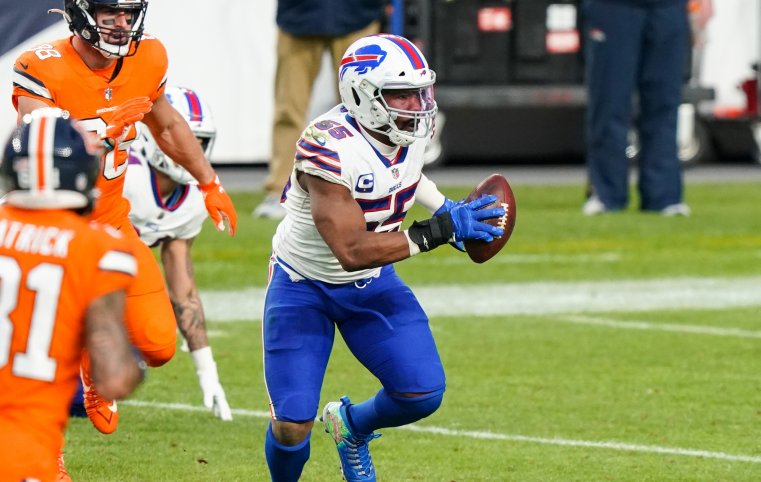 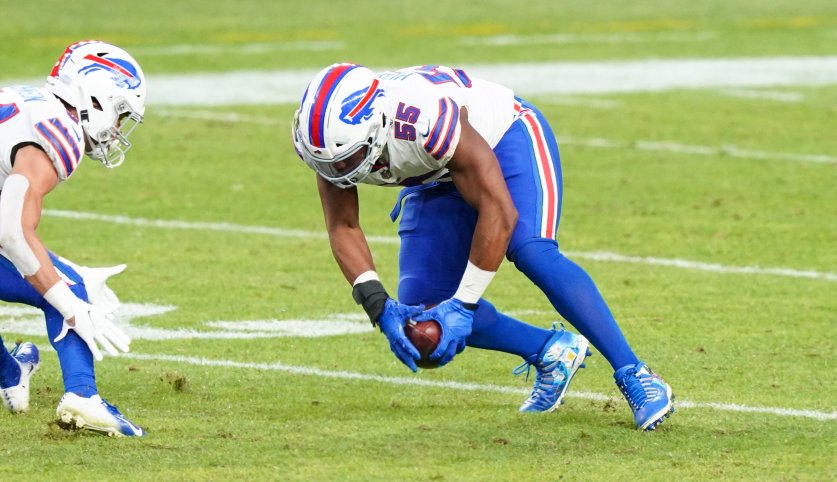