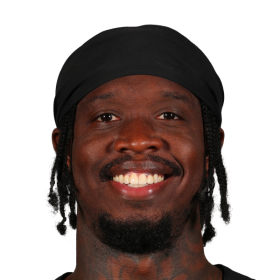 Our goal is to ensure that people with seizures are able to participate in all life experiences, to improve how the community views epilepsy, and to dispel myths about this condition by providing information through training, events, and programs.

Jaquiski Tartt was born February 18, 1992, in Mobile, Alabama. The San Francisco 49ers selected Tartt in the second round (46th overall) of the 2015 NFL Draft. Tartt was the third safety drafted in 2015, behind Arizona State's Damarious Randall and Alabama's Landon Collins. The selection made Tartt the highest-drafted Samford player in school history. Upon joining the 49ers, Tartt reunited with fo...

Jaquiski Tartt was born February 18, 1992, in Mobile, Alabama. The San Francisco 49ers selected Tartt in the second round (46th overall) of the 2015 NFL Draft. Tartt was the third safety drafted in 2015, behind Arizona State's Damarious Randall and A...

Jaquiski Tartt was born February 18, 1992, in Mobile, Alabama. The San Francisco 49ers selected Tartt in the second round (46th overall) of the 2015 NFL Draft. Tartt was the third safety drafted in 2015, behind Arizona State's Damarious Randall and Alabama's Landon Collins. The selection made Tartt the highest-drafted Samford player in school history. Upon joining the 49ers, Tartt reunited with former high school teammate Jimmie Ward.

Tartt entered training camp slated as a backup safety and was expected to primarily play in special teams and appear minimally as a backup on defense. Head coach Jim Tomsula named Tartt the backup strong safety to begin the regular season, behind veteran Antoine Bethea.

He made his professional regular-season debut in the San Francisco 49ers' season-opener against the Minnesota Vikings and recorded four solo tackles and made his first career sack in their 20–3 victory. He sacked quarterback Teddy Bridgewater for a 14-yard loss in the first quarter and made his first career tackle on running back Matt Asiata in the second quarter. On October 22, 2015, Tartt collected a season-high nine combined tackles during a 20–3 loss to the Seattle Seahawks in Week 7. During the first seven games, Tartt was used primarily in dime packages and on special teams. On November 1, 2015, Tartt earned his first career start in place of Antoine Bethea in Week 8. Defensive coordinator Eric Mangini named Tartt the starter after Bethea tore his pectoral muscle the previous week and missed the remainder of the season. Tartt finished the 49ers' 27–6 loss at the St. Louis Rams with six combined tackles. The following week, he made a season-high two pass deflections and four tackles in the 49ers' 17–16 win against the Atlanta Facons in Week 9. On December 13, 2015, Tartt collected eight combined tackles, deflected a pass, and made his first career interception during a 24–10 loss at the Cleveland Browns in Week 14. His interception occurred in the second quarter off a pass attempt by rookie quarterback Johnny Manziel. Tartt was inactive for the 49ers' Week 17 win against the St. Louis Rams due to a knee injury. He finished his rookie season with 65 combined tackles (52 solo), three passes defensed, two sacks, and an interception in 15 games and eight starts.

On January 3, 2016, the San Francisco 49ers fired head coach Jim Tomsula after finishing with a 5–11 record in 2015. Throughout training camp, Tartt competed against Antoine Bethea to be the starting strong safety. Head coach Chip Kelly named Tartt the backup strong safety behind Antoine Bethea to start the regular season in 2016.

He was sidelined for the 49ers' Week 6 loss to the Buffalo Bills after injuring his quadriceps the previous week. On November 27, 2016, Tartt made his first start at free safety and recorded three combined tackles in their 31–24 loss at the Miami Dolphins in Week 12. He earned the starting role for the rest of the season after the 49ers placed Eric Reid on injured reserve after he tore his bicep in his right arm. In Week 14, he collected a career-high 12 combined tackles (ten solo) and a sack during a 23–17 loss to the New York Jets. Tartt finished the 2016 season with 61 combined tackles (47 solo), three pass deflections, and a sack in 15 games and six starts.

On January 2, 2017, the San Francisco 49ers fired head coach Chip Kelly after the 49ers finished with a 2–14 record in 2016. Defensive coordinator Jim O'Neil held a competition between Tartt and Eric Reid to name a new starting strong safety after Antoine Bethea was granted his release. Head coach Kyle Shanahan named Tartt the backup strong safety to begin the regular season, behind Eric Reid.

He started in the San Francisco 49ers' season-opener against the Carolina Panthers and recorded a season-high seven solo tackles, a pass deflection, and intercepted a pass by quarterback Cam Newton in the second quarter of their 23–3 loss. Tartt started the first two regular-season games at free safety in place of Jimmie Ward who was inactive due to a hamstring injury. The following week, he was named the starting strong safety after Eric Reid was inactive for three games (Weeks 3–5) due to a knee injury. In Week 8, he tied his season-high of seven combined tackles during a 33–10 loss at the Philadelphia Eagles. The following week, Tartt recorded three combined tackles before exiting in the third quarter of the 49ers' 20–10 loss to the Arizona Cardinals after breaking his arm. On November 6, 2017, the San Francisco 49ers placed Tartt on injured reserve due to his fractured forearm. He finished the 2017 season with 55 combined tackles (38 solo), three pass deflections, an interception, and was credited with half a sack in nine games and nine starts. Pro Football Focus gave Tartt an overall grade of 85.8, ranking him 15th among all qualifying safeties in 2017.

On April 27, 2018, Tartt signed a two-year, $13 million contract extension with the 49ers through the 2020 season. He started eight games while dealing with a shoulder injury throughout the year. He was placed on injured reserve on December 21, 2018. He finished the season with 42 tackles, two passes defensed, and one interception.

Tartt in a game against the Washington Redskins

In week 10 against the Seattle Seahawks on Monday Night Football, Tartt forced a fumble on rookie wide receiver DK Metcalf which he recovered in the 27–24 overtime loss. In Super Bowl LIV against the Kansas City Chiefs, Tartt recorded a sack on Patrick Mahomes during the 31–20 loss.

In Week 1 against the Arizona Cardinals, Tartt recorded his first interception of the season off a pass thrown by Kyler Murray during the 24–20 loss. He suffered turf toe in Week 9 and was placed on injured reserve on November 11, 2020. 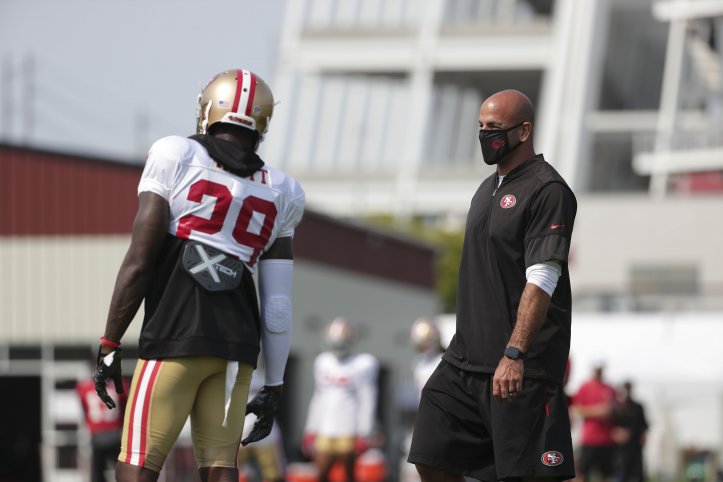 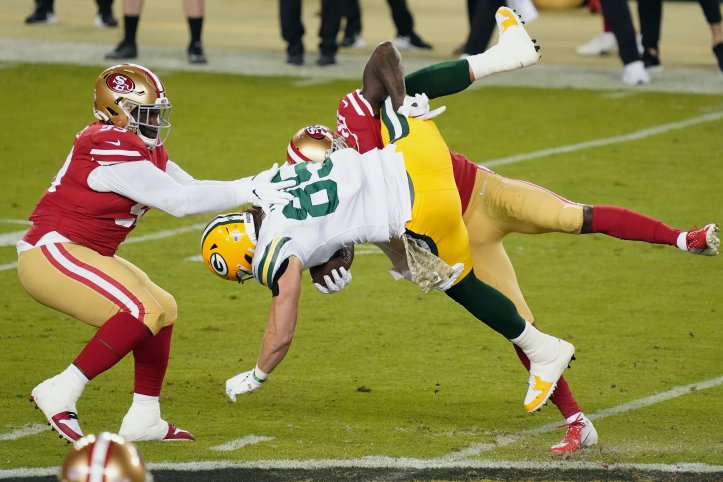 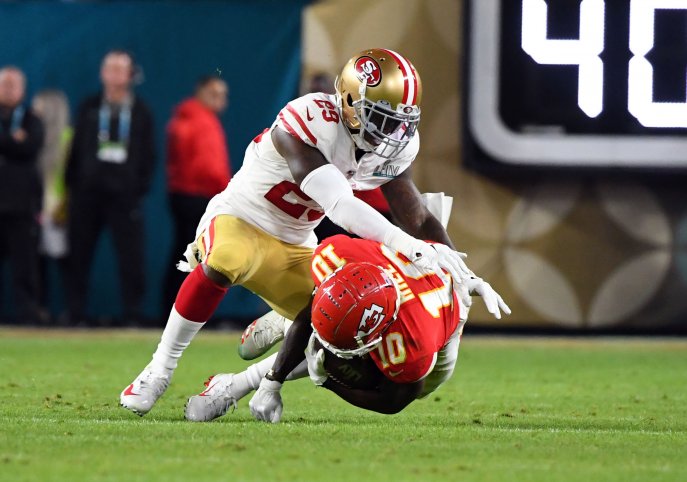 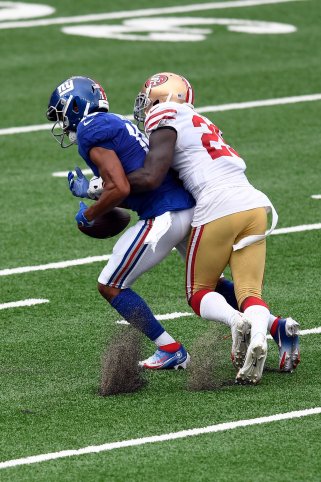 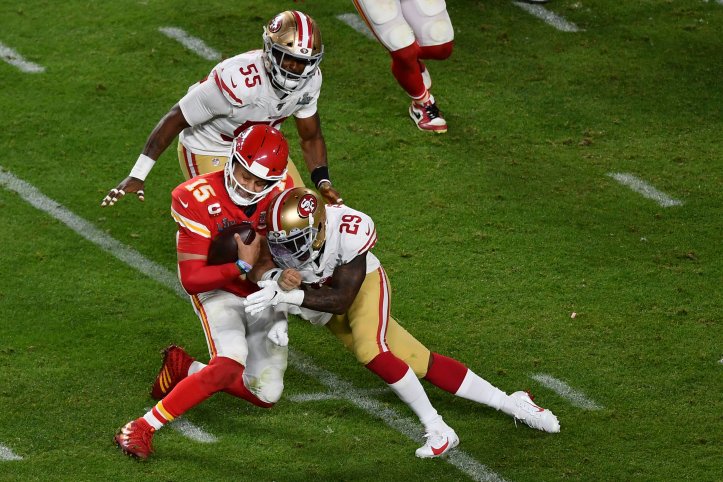 Great team win!!! On to the next!!! Shout out to #NinerFaithful🙌🏿