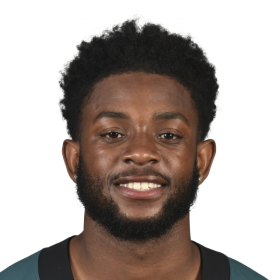 He studied at the University of Houston and is a wide receiver that has played in multiple teams throughout his NFL career such as the San Antonio Commanders of the Alliance of American Football and currently the Philadelphia Eagles of the National Football League. In his early years, Ward attended John ...

He studied at the University of Houston and is a wide receiver that has played in multiple teams throughout his NFL career such as the San Antonio Commande...

He studied at the University of Houston and is a wide receiver that has played in multiple teams throughout his NFL career such as the San Antonio Commanders of the Alliance of American Football and currently the Philadelphia Eagles of the National Football League. In his early years, Ward attended John Tyler High School where he was a three-star recruit by ESPN, Rivals, Scout, and 247Sports, was the No. 3 quarterback in the state of Texas by Dave Campbell and was the No. 60 player in the state of Texas by Rivals. He was named to Dave Campbell's Second Team All-Texas team, was named to the 2013 Old Coach Class 4A All-State first team and was named Associated Press Class 4A Honorable Mention All-State. He was the Dave Campbell's 4A Region II Player of the Year and led Texas Class 4A with 4,202 passing yards and 39 touchdowns against five interceptions as a senior. He also added 861 rushing yards and 13 touchdowns on 170 carries and as a junior, he threw for 3,596 yards and 32 touchdowns against five interceptions while rushing 207 times for 1,212 yards and 18 touchdowns. As a sophomore, he played as a wide receiver where he pulled in 53 receptions for 667 yards and eight touchdowns.

After he finished high school, Ward committed to the University of Houston where as a freshman in 2013, he was the backup quarterback who also played receiver and saw time as Houston's punt returner late in the year. He made his debut in the third game of the season against Rice, where he connected on all three pass attempts for a total of 48 yards while picking up 80 yards on the ground off nine rushing attempts. He had 40 yards of total offense against UTSA and scored his first career touchdown on a six-yard run and threw his first career touchdown against BYU as he hit Xavier Maxwell for a career-long 69-yard scoring strike. Ward had his second rushing touchdown at Rutgers as he finished the game with 91 rushing yards off 11 attempts and made his first career reception vs. Louisville as he pulled in a seven-yard gain for a UH first down. He hauled in his first career receiving touchdown against SMU as he made a leaping 19-yard grab in the back of the end zone en route to five receptions for 48 yards vs. the Mustangs. As a sophomore in 2014, Ward started the final eight games as Houston's quarterback and started the first five games as Houston's starting receiver. As a quarterback, he passed for 12 touchdowns on 2,010 yards with a passing percentage of 67.3 that was good for No. 9 nationally and rushed for six scores and 118 carries, totaling 573 yards, while as a receiver, he made 15 receptions for 139 yards. He led the Cougars to a comeback win over Pittsburgh in the Armed Forces Bowl and was 15-of-24 for 274 yards and three passing touchdowns in the win while rushing for 92 yards. He finished 17-of-28 for 188 passing yards and a touchdown with 95 rushing yards including a 64-yard scoring run in his first career start at quarterback at Memphis and notched two touchdowns in the win over Grambling, where one was a rushing touchdown and the other one was a receiving TD. He made his first career start for the Cougars, at receiver, in the 2014 season opener against UTSA, where he finished with five receptions for 21 yards.

As a junior in 2015, he started 13 games at quarterback for the Cougars while appearing in 14, claiming the Earl Campbell Award, presented annually to the top player from the state of Texas and being a Manning Award finalist. He became the first Houston quarterback to rush for over 1,000 yards in a season, finishing with 1,108 yards and finished fifth nationally and set the Houston single-season record for rushing touchdowns with 21. He ranked ninth nationally in completion percentage and threw just six interceptions, ranking seventh nationally among quarterbacks with at least 300 attempts. He also joined by Clemson's Deshaun Watson as the only quarterbacks to rush for over 1,000 yards and pass for over 2,000 yards. In his senior season in 2016, Ward started all 12 games at quarterback he appeared in this season and led The American in passing with an average of 296.4 yards per game despite missing Houston's second game of the year against Lamar. He also led The American in total offense with an average of 339.6 yards per game and was fourth in the league with 22 passing touchdowns and seventh with 10 rushing touchdowns. Deshaun Watson and him finished the year as the only players nationally to average over 290 yards passing (296.4) and over 40 yards rushing (43.2) per game and he ranked third nationally (over last two seasons) with 13 games with both passing and rushing touchdowns in the same game. He threw for his first career 400+ yard game, totaling 487 yards on a 47-of-67 effort with four touchdowns at Memphis on November 25.

After he graduated from college, Ward entered the 2017 NFL Draft where he was signed by the Philadelphia Eagles as an undrafted free agent on May 11, 2017. He was waived on September 2, 2017, and was signed to the Eagles practice squad the next day. He was released on September 12, 2017, and was later re-signed to the practice squad. He signed a reserve/future contract with the Eagles on February 7, 2018, and was released on September 7, 2018. On January 1, 2019, Ward signed with the San Antonio Commanders of the AAF. He would go on to catch 22 passes for 214 yards in the eight games the league lasted. After the AAF suspended football operations, Ward re-signed with the Eagles for one-year on April 9, 2019. 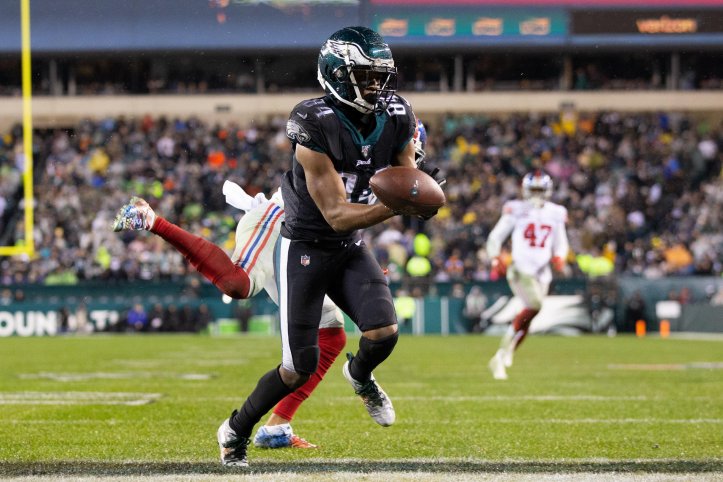 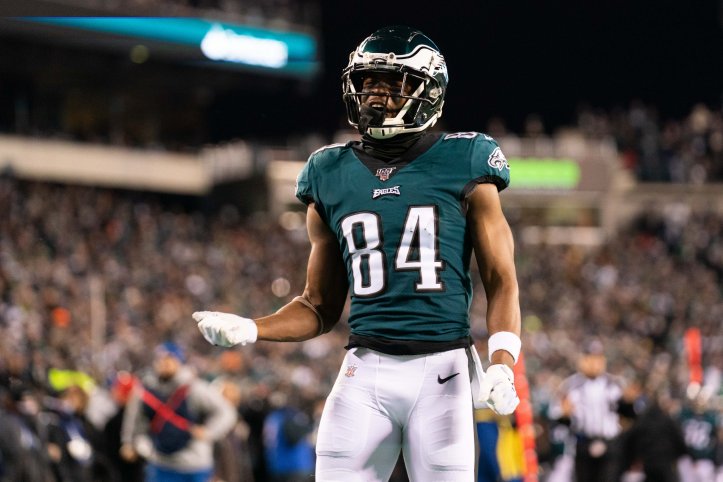 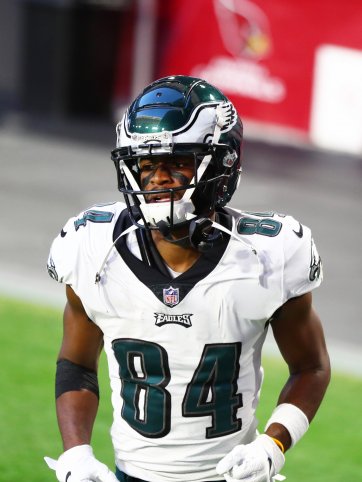 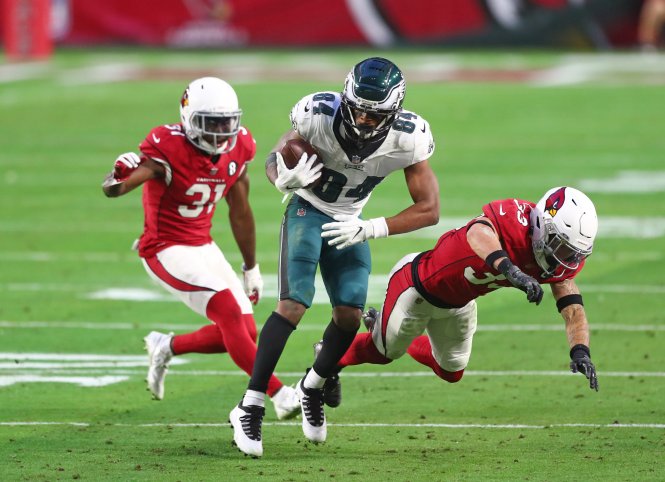 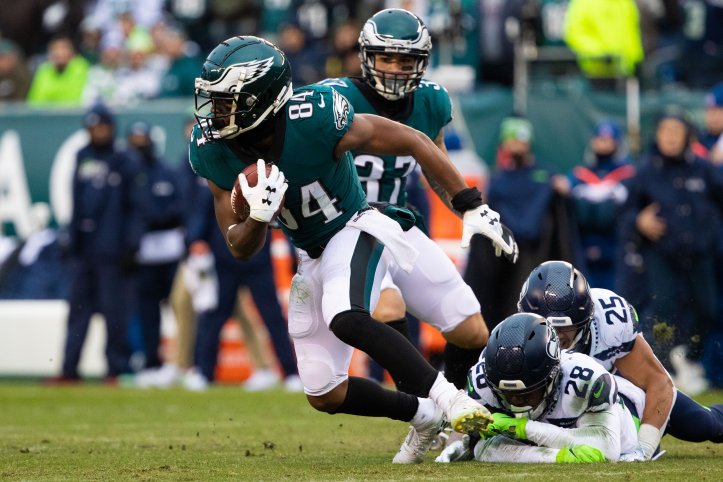