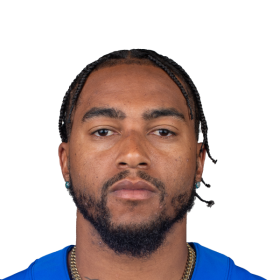 To advance the common good by caring, cultivating, collaborating and advocating–One Team, One Purpose.

Partnered with Dick's Sporting Goods to donate $10,000 to support top prospects for Baseball.

Jackson attended Long Beach Polytechnic High School, He was named the 2004 Glenn Davis Award winner by the Los Angeles Times as Southern California's player of the year. He also ran track and played baseball and was scouted by both the Tampa Bay Rays and Philadelphia Phillies in hi...

Jackson attended Long Beach Polytechnic High School, He was named the 2004 Glenn Davis Award winner by the Los Angeles Times as Southern California's player of the year. He also ran track and played baseball and was scouted by both the Tampa Bay Rays and Philadelphia Phillies in his senior year. Jackson caught 60 passes for 1,075 yards for 15 touchdowns his senior year, leading the Jackrabbits to a CIF Southern Section championship. To cap off his high school career, Jackson has voted the Most Valuable Player at the U.S. Army All-American Bowl in San Antonio, Texas, where he caught seven passes for 141 yards and passed for a 45-yard touchdown. ESPN.com's Tom Lemming rated him as the number four wide receiver in the country, PrepStar Magazine named him an All-American and a member of its Dream Team Top 100 players, and Calhisports.com voted him the 2004 Mr. Football State Player of the Year. He committed to the football program at the University of California, Berkeley.

Jackson attended the University of California, where he played for the California Golden Bears football team from 2005 to 2007. Throughout his freshman season, Jackson picked up 38 receptions for 601 yards along with seven touchdowns, eclipsing the 100-yard mark three times. In the 2005 Las Vegas Bowl game against BYU, Jackson tallied 130 yards and two scores. Jackson was also expected to play for Cal's baseball team but, due to the success of his freshman football season, he chose to focus exclusively on football. Coming into his sophomore year with high expectations, Jackson displayed more of his talent and playmaking ability, tallying 1,060 receiving yards and nine touchdowns. Jackson also returned four punts for touchdowns. He earned first-team All-Pac-10 honors as both a punt returner and a wide receiver. Jackson garnered national recognition with selections to first-team All-America by the Associated Press, Walter Camp Football Foundation, the Football Writers Association of America, The Sporting News, and Rivals.com as a punt returner. Jackson also captured the inaugural Randy Moss Award as the top returner in the nation. Jackson finished the 2007 season with 65 catches for 762 yards and scored six touchdowns as a receiver. Jackson was named an All-American as a return specialist. Jackson left Cal following the 2007 season and declared for the 2008 NFL Draft. He departed holding Pac-10 records for punts returned for a touchdown both in a season (four) and in a career (six). Jackson ranks third all-time at California for receiving yards with 2,423 and receiving touchdowns with 22. He is sixth in receptions (162). Jackson finished with 52 career plays of 20 yards or more, making up 23 percent of his 226 touches.

On April 26, 2008, Jackson was drafted in the second round (49th overall) of the 2008 NFL Draft by the Philadelphia Eagles. Jackson finished a successful rookie season with two receiving touchdowns and a team-leading 62 receptions (the most by an Eagles rookie wide-receiver, second only to tight end Keith Jackson's 81 in 1988, and joining Jackson and Don Looney as the only Eagles to lead the team in receptions their rookie seasons). His 912 receiving yards surpassed Keith Jackson's rookie record of 869. He also led the NFL with 50 punt returns (an Eagles' rookie record and 3rd all-time) for 440 yards (third in the NFL, fifth ever by an Eagle, and an Eagles' rookie record). For the 2009 season, Jackson lead Eagles' receivers with 1,167 yards. He was selected to the 2010 Pro Bowl as a starting wide receiver and a kick returner, the first time in Pro Bowl history that a player was selected at two different positions. At the Pro Bowl, Jackson caught six passes for a team-high 101 yards and two touchdowns, including a 58-yard catch-and-run touchdown pass from McNabb. He was selected to the Sporting News' All-Pro team as a punt returner for the 2009 season, averaging 15.2 yards per punt return in 2009 as the league leader. In 2010, Jackson again ended the regular season as the team's leading receiver with 1,056 yards For the 2011 season, Jackson ended the season as the Eagles' leading receiver with 961 yards. Jackson received the Eagles' franchise tag on March 1, 2012. In 11 games, he had 45 receptions for 700 yards; his 77-yard touchdown catch against New Orleans was the longest by an Eagles player that season. For 2013, he led the team with 82 receptions for 1,332 yards (4th and 2nd most by an Eagle in a season). Though this was statistically the best season of his career, and led to his third Pro Bowl selection, Jackson was released by the Eagles on March 28, 2014. He left the Eagles with the franchise's 4th most receiving yards (6,117), 8th most receptions (356), 9th most receiving touchdowns (32), and tied for the 3rd most 100+ receiving-yard games (20).

On April 2, 2014, Jackson signed with the Washington Redskins. On the NFL Network's Top 100 Players of 2014, Jackson was voted the 63rd best player (overall) in the league by his peers. On September 21, 2014 he would play against the Eagles in his return to Philadelphia. In the game, he scored an 81-yard touchdown pass from quarterback Kirk Cousins. The jersey that Jackson wore in that game would be featured at the Pro Football Hall of Fame after he became the third player in NFL history to record an 80-yard touchdown both for and against a team. Jackson broke 100-yards receiving in six games that season, and ended with 56 receptions for a team-leading 1,169 and 6 touchdowns, and led the NFL for the second time in his career with 20.9 yards per catch. After several injuries in 2015, he ended the season with 30 catches for 528 yards (career lows) and 4 touchdowns. In 2016, he ended the year with 56 receptions for 1,005 yards and 4 touchdowns, leading the NFL for the third time with 17.9 yards per catch.

On March 9, 2017, Jackson signed a three-year contract with the Tampa Bay Buccaneers. Overall, in the 2017 season, he recorded 50 receptions for 668 receiving yards and three receiving touchdowns. The 32-year-old Jackson ended the 2018 season with enough receptions (41 for 774 yards) to qualify as the league leader in yards-per-reception (18.9) for the fourth time in his career.

On March 13, 2019, Jackson and a 2020 seventh-round selection were traded to the Eagles in exchange for a 2019 sixth-round compensatory selection. Jackson made his return to the Eagles in Week 1 against another former team, the Washington Redskins. In the game, Jackson caught 8 passes for 154 yards and 2 touchdowns. The 2 touchdowns he scored during the game put him at 31 career touchdowns over 50 yards, passing Randy Moss' 29, putting Jackson at 2nd in NFL history. He underwent core-muscle surgery on November 5 and was subsequently placed on injured reserve. In the first 3 weeks of the 2020 season, Jackson caught 10 passes for 121 yards before missing the next 3 games due to a hamstring injury. He returned in Week 7, but suffered a lower-body injury in the game and was placed on injured reserve on October 26, 2020. He was activated on December 26, 2020. In Week 16 against the Dallas Cowboys, Jackson caught an 81-yard touchdown pass from Jalen Hurts. With that 81-yard touchdown, Jackson has 25 career touchdowns of 60-plus yards, the most in NFL history. The touchdown is his 5th of 80 or more yards, which ties an NFL record which he shares with Jerry Rice, Lance Alworth, Bob Hayes, and Derrick Alexander. Jackson was released on February 19, 2021.

On October 18, 2022, Jackson signed a deal with the Baltimore Ravens. 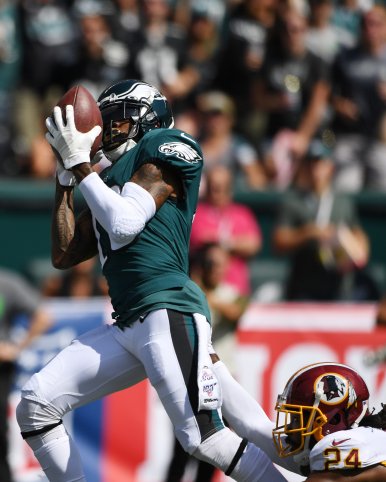 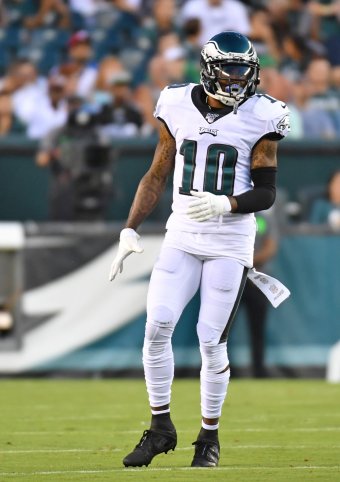 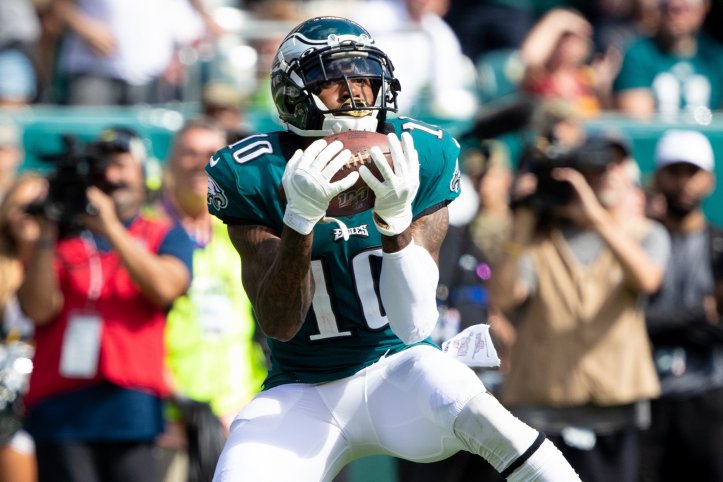 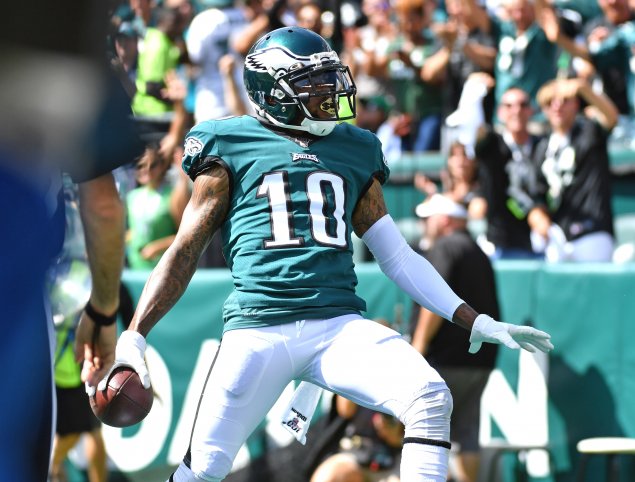 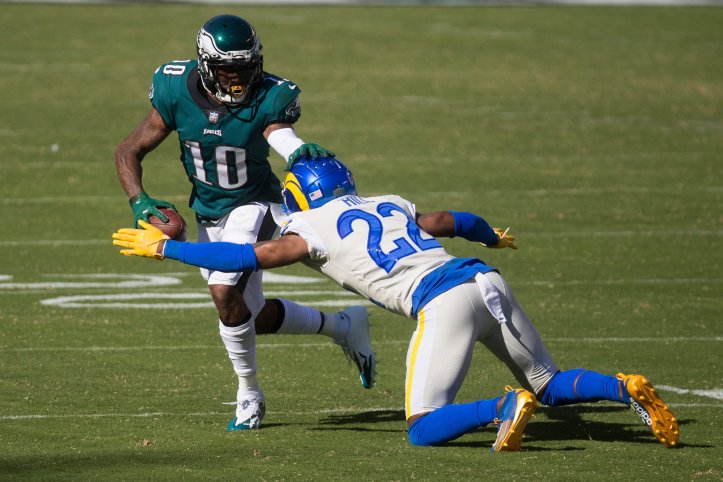 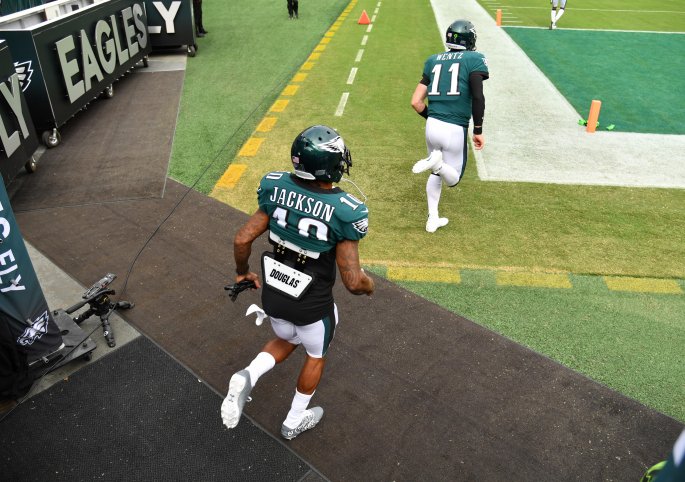 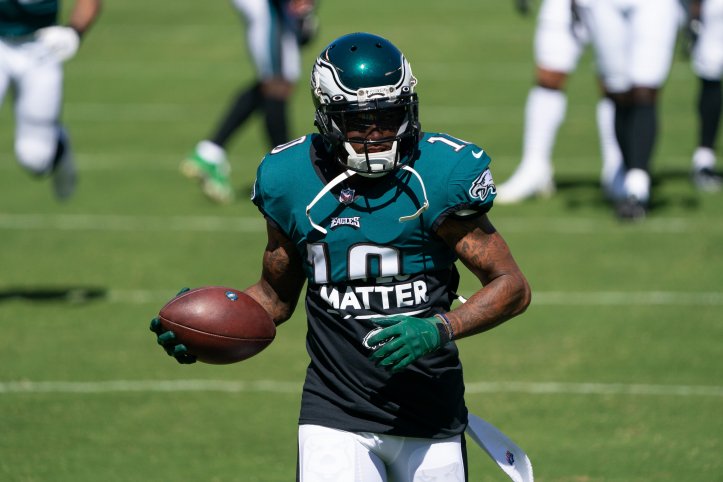 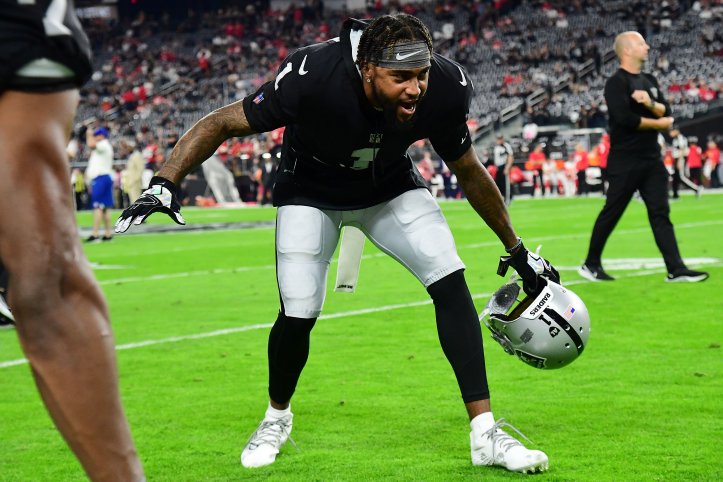 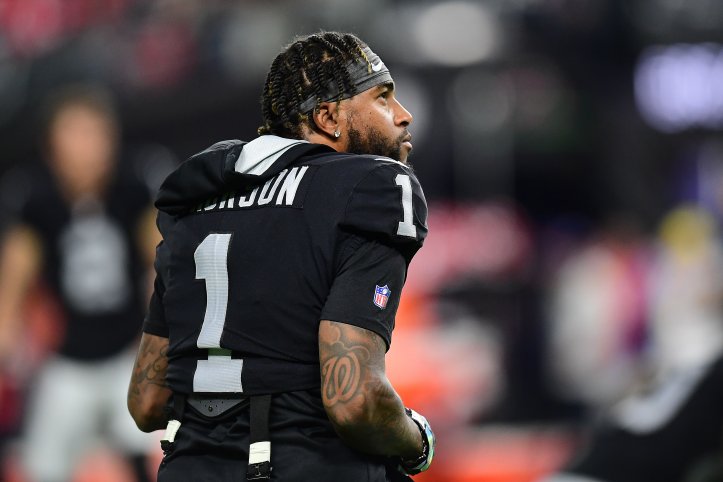 Crazy how the fame be changing these N***** !! https://t.co/WueOQsNvyX

RT @JClarkNBCS: DeSean Jackson is back to see his Eagles. He says they’re going to the Super Bowl https://t.co/GFCWpOM7lQ 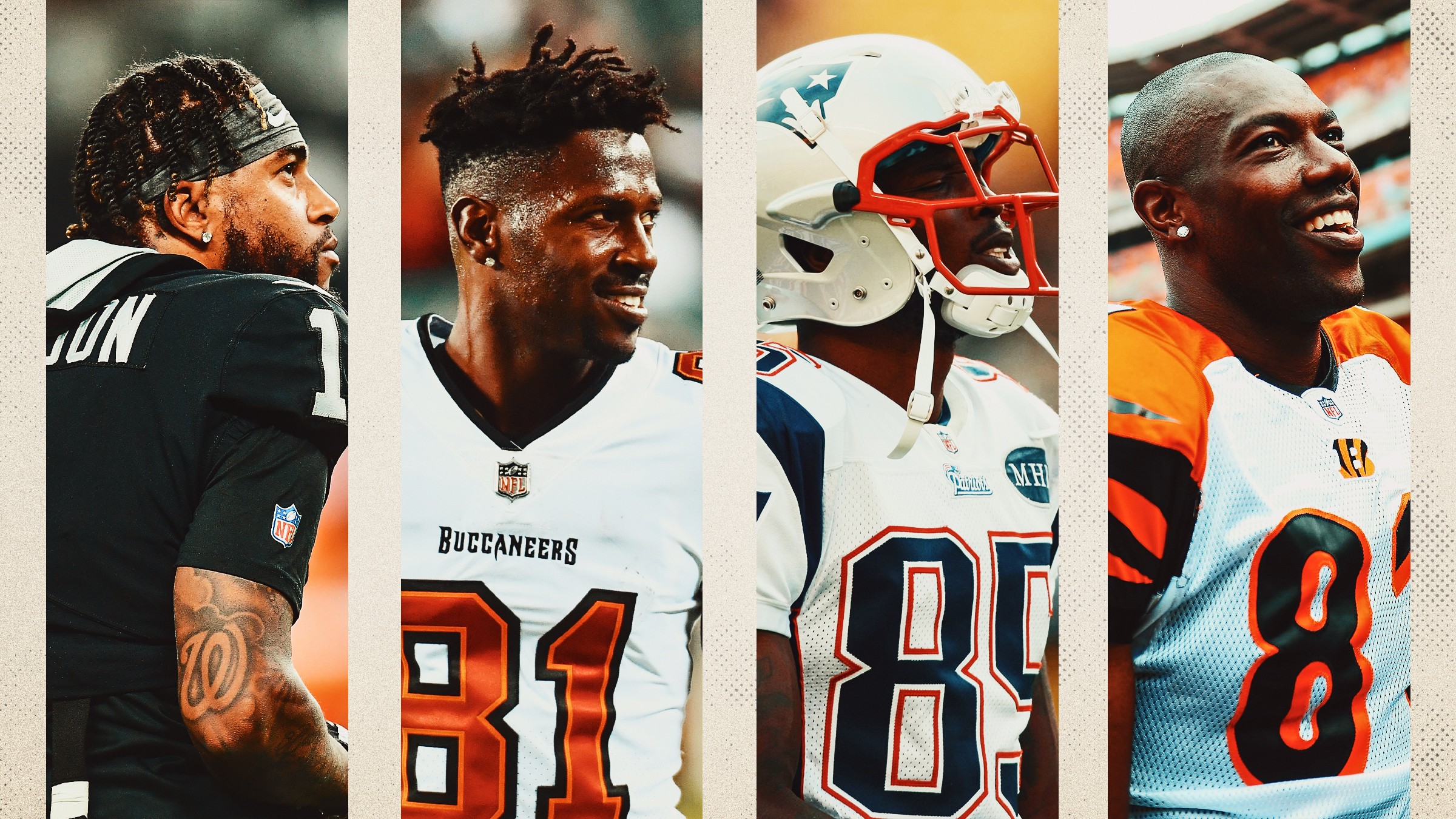 These players have the gift of grab and gab