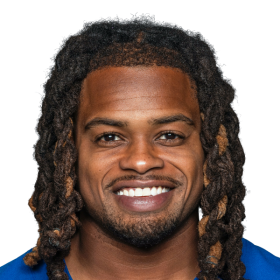 In his early years, McCain attended Oxford High School, where he was teammates with Kwon Alexander and was considered a three-star recruit by Rivals.com and was listed as the No. 36 prospect from the state of Alabama in 2011.

After graduating high school, McCain committed to the Univer...

In his early years, McCain attended Oxford High School, where he was teammates with Kwon Alexander and was considered a three-star recr...

In his early years, McCain attended Oxford High School, where he was teammates with Kwon Alexander and was considered a three-star recruit by Rivals.com and was listed as the No. 36 prospect from the state of Alabama in 2011.

After graduating high school, McCain committed to the University of Memphis where as a freshman, he played in 11 games with 9 starts and logged 29 total tackles with 23 solo hits and six assists. He had four pass breakups, one interception that was returned for a TD, one forced fumble and one TFL for a 1-yard loss. He saw his first collegiate action in the season opener against Mississippi State and recorded his first collegiate solo tackle against Arkansas State. He logged a season bests for total tackles with 8 and solo stops with 7 against Middle Tennessee. He had one solo stop and one pass breakup against Rice and picked off his first collegiate pass and returned it 79 yards for a TD against Tulane. He logged three solo stops, one pass breakup and his first forced fumble against UAB. AS a sophomore, McCain started all 12 games and finished with 36 total tackles,  three pass breakups, 3.5 tackles for loss and 1.5 quarterback sacks. During the season, he had 28 kickoff returns for 721 yards, in which the 28 kickoff returns tied for fifth-most in program history while the 721 yards ranks fourth. He became the team's regular kickoff returner the third game of the season against Middle Tennessee and established career highs with five kickoff returns for 138 yards against the Blue Raiders. Against the Blue Devils had a 95-yard kickoff return, tying for the fourth-longest in school history and made his first tackle for loss during the year came against Rice, one of three tackles while also breaking up a pass in a Conference USA-opening victory.

As a junior in 2013, he was an NCAA FBS Football's co-leader in interceptions per game with a 0.7 average and had six interceptions for 108 total yards. He returned two picks for touchdowns during the season and his six interceptions tied for the fifth-most in a season while his 122 interception return yards is the third-highest in program history. He shared the NCAA statistical championship with Virginia's Anthony Harris and finished the season with 25 total tackles including 21 solo stops, six interceptions, broke up four passes and recovered two fumbles. In his senior year in 2014, he was one of eight Memphis players to start all 13 games during a 2014 season which saw the Tigers claim their first conference title since 1971 and win 10 games for just the second time in school history. He played a pivotal role in the Tigers second-half run as the squad closed out the year with a seven-game winning streak. McCain was a member of a defensive unit which ranked 11th nationally in scoring defense averaging 19.5 points per game and third in the red-zone defense, allowing opponents to convert on just 68.8 percent of drives inside the 20 and with 46 total tackles, he ranked fourth on the squad in total stops. He led the Tigers with five interceptions for 59 return yards and a touchdown and he ranked 24th in FBS Football and third in the American, averaging 0.3 interceptions per game.

After he graduated from college, McCain entered the 2015 NFL Draft where he was selected in the fifth round by the Miami Dolphins, being the 18th cornerback drafted in 2015. On May 7, 2015, the Miami Dolphins signed McCain to a four-year contract and was named the fourth cornerback to begin the 2015 season. He made his professional regular-season debut in the Miami Dolphins season-opening against the Washington Redskins and on November 15, 2015, McCain earned his first career start and recorded two combined tackles against the Philadelphia Eagles in Week 10. On December 6, 2015, he collected a season-high seven solo tackles and deflected a pass against the Baltimore Ravens in Week 13 and he finished his rookie season with 28 combined tackles with 23 solo tackles and four pass deflections in 16 games and four starts. In the 2016 season, McCain was named the third cornerback to begin the season and was also named the first-team Nickelback. On September 29, 2016, McCain recorded four combined tackles, deflected a pass, and made his first career sack on Andy Dalton against the Cincinnati Bengals and on November 6, 2016, he recorded three solo tackles, broke up a pass, and made his first career interception against the New York Jets in Week 9.  In Week 12, he collected a season-high five combined tackles and broke up one pass against the San Francisco 49ers in Week 12 and he finished the 2016 NFL season with 45 combined tackles with 32 solo tackles, six pass deflections, one interception, one sack, and a forced fumble in 16 games and eight starts. On January 8, 2017, McCain started in his first career playoff game and recorded two tackles in the AFC Wildcard Game against the Pittsburgh Steelers.

In the 2017 season, McCain named McCain the first-team Nickelback to start the season. In Week 16, he collected a season-high eight combined tackles and broke up a pass against the Kansas City Chiefs and he finished the season with 48 combined tackles with 36 solo tackles, seven pass deflections, two interceptions, and a sack in 16 games and seven starts. On June 1, 2018, McCain signed a four-year contract extension and was named the starting cornerback alongside Xavien Howard to begin the 2018 season. 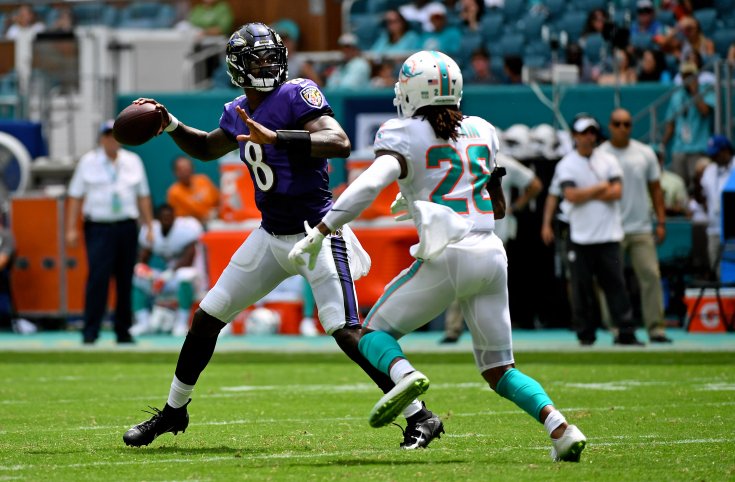 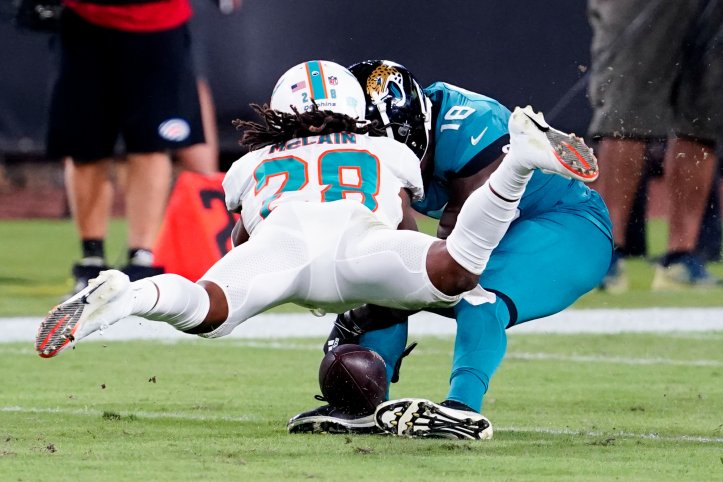 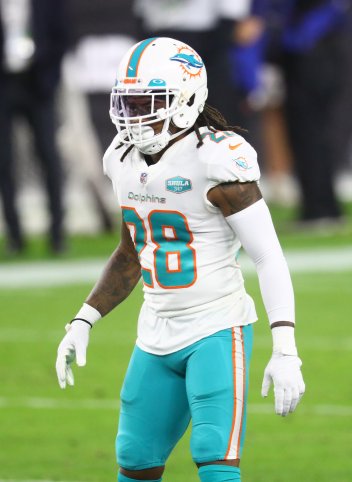 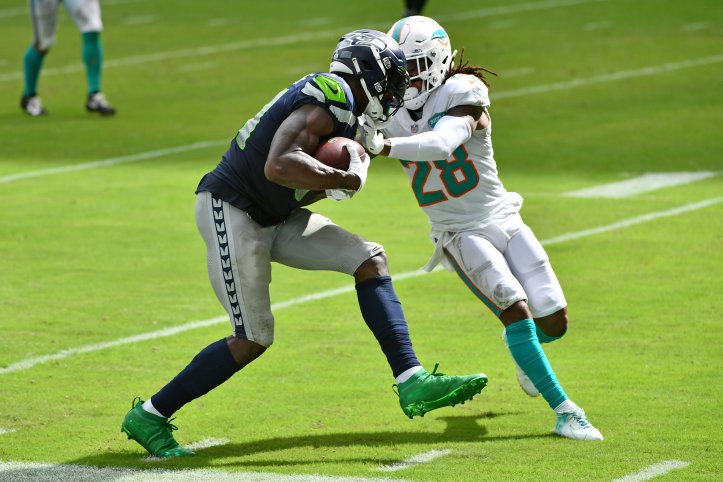 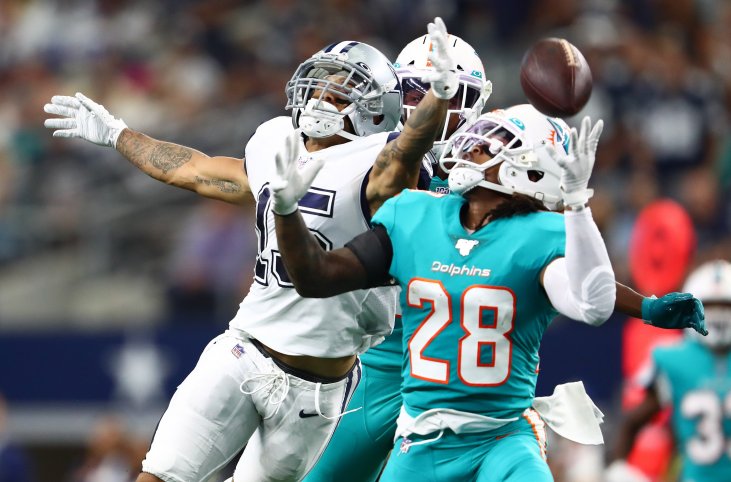