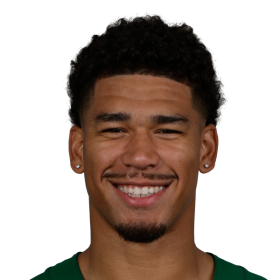 Allen Lazard was a four-year starter on both offense and defense at Urbandale High School. Lazard still holds the school career records in receptions (105), receiving yards (2,349), touchdowns (34) and interceptions (14). His high school honors include but are not limited to USA Today All American, Des Moines Register's Offensive Player of the Year in 2013, Defensive Player of the Year in 2012, an...

Allen Lazard was a four-year starter on both offense and defense at Urbandale High School. Lazard still holds the school career records in receptions (105), receiving yards (2,349), touchdowns (34) and interceptions (14). His high school honors include but are not limited to USA Today All American, Des Moines Register's Offensive Player of the Year in 2013, Defensive Player of the Year in 2012, and a three-time All-State selection.

A consensus four-star wide receiver, Lazard was a highly touted recruit out of high school. He was ranked the #1 recruit of the state of Iowa and the 7th best receiver in the country by Rivals. Lazard ultimately followed his father Kevin (1990–93) and brother Anthony (2013–16) in playing for the Iowa State Cyclones over Notre Dame, Nebraska, Stanford, California and Iowa.

Opting not to redshirt, Lazard started 11 of the Cyclones 12 games. He finished second on the team in receptions (45) and receiving yards (593) as well as scoring three touchdowns. Both reception and receiving totals rank second all-time for an ISU freshman. The first catch of his career went for 48 yards against North Dakota State and he caught his first career touchdown pass against Kansas State the next week. His season high was 96 yards and a touchdown against the Toledo Rockets. At the conclusion of the season, Lazard was named to the All-Big 12 honorable mention team and earned ESPN.com Big 12 All-Underclassman honors.

Lazard built on the success from his freshman season by starting all 11 games he played in and lead the team in receptions (56), receiving yards (808) and TD catches (6). He ranked fifth in the Big 12 and 59th nationally in receptions per game (5.1) and was sixth in the Big 12 and 51st in the nation in receiving yardage (73.5). His seasons highs included a then career-high 147 yards receiving and a career-long 74-yard touchdown against TCU and a pair of touchdowns on five catches for 87 yards against Kansas State. Lazard was named Second-Team All-Big 12 by the AP and ESPN’s Big 12 All-Underclassman team for second-straight season as well receiving the Pete Taylor Most Valuable Player.

Lazard's breakout season was in 2016 and was one of the greatest single seasons in Cyclone history. He once again led the team in receptions (69), receiving yards (1,018) and TD catches (7) as well as breaking the school record for 100-yard receiving games with six and becoming the fourth player in school history to record a 1,000-yard season. He ranked sixth in the Big 12 and 37th nationally in receptions per game (5.8) ranked fifth in the Big 12 and 29th nationally in receiving yards per game (84.8). Lazard opened the season with back-to-back 100-yard games against in state rivals UNI (129) and Iowa (111). Against Kansas State he tallied eight receptions for 134 yards. He recorded a career-high 10 receptions for 120 yards and a touchdown against Kansas. Lazard finished the season with three straight 100-yard games against Kansas (120), Texas Tech (137) and West Virginia (103). Lazard was named First-Team All-Big 12 by the Coaches and ESPN and as the Pete Taylor Most Valuable Player for the second straight year.

In 2017, Lazard continued on his success of 2016. He again led the team in receptions, receiving yards, and touchdowns with 71, 941, and 10 respectively. Against Northern Iowa, Lazard had eight receptions for 108 yards, he followed that up with two touchdown catches against Iowa the next week. In the win at #3 Oklahoma, Allen had 69 yards and a game-sealing touchdown. In the home victory against TCU, Lazard had another 100-yard performance with 106 yards on six catches. His two best games of the season were nine receptions for 126 yards and a touchdown against Oklahoma State and 10 catches for 142 yards and a touchdown in the Liberty Bowl win against #19 Memphis. At the conclusion of the season, Lazard was named First-Team All-Big 12 by the coaches and Second-Team All-Big 12 by the media.

Lazard was originally signed out of Iowa State by the Jacksonville Jaguars on May 11. He spent the regular season on the Jaguars’ practice squad. The Green Bay Packers signed Allen Lazard to the active roster from the Jacksonville Jaguars’ practice squad on Dec. 18, 2018. He was waived on August 31, 2019 and was signed to the practice squad the next day. He was promoted to the active roster on September 4, 2019. Lazard recorded his first professional touchdown, a 35-yard reception from Aaron Rodgers, during a Week 6 win over the Detroit Lions on October 14, 2019. He had a breakout performance on December 1, 2019 in a 31–13-week-13 victory over the New York Giants, posting three catches for 103 yards and a touchdown. Overall, Lazard finished the 2019 season with 35 receptions for 477 receiving yards and three receiving touchdowns, while also adding one rushing attempt for 21 yards.

On March 17, 2020, the Packers tendered Lazard as an exclusive-rights free agent. He signed the one-year tender on April 27, 2020. In Week 1 against the Minnesota Vikings, Lazard caught four passes for 63 yards and his first touchdown of the season during the 43–34 win. During Sunday Night Football against the New Orleans Saints in Week 3, Lazard finished with six receptions for 146 receiving yards and a touchdown as the Packers won 37–30. He was placed on injured reserve on October 3, 2020, after undergoing core muscle surgery. He was activated on November 17, 2020. In Week 12, in his second game off of injured reserve, Lazard caught his third touchdown of the season in Green Bay's win over the Chicago Bears, along with 23 receiving yards. In the Divisional Round of the playoffs against the Los Angeles Rams, Lazard recorded 4 catches for 96 yards, including a 58-yard touchdown reception, during the 32–18 win. In the NFC Championship against the Tampa Bay Buccaneers, Lazard recorded 3 catches for 62 yards during the 31–26 loss. 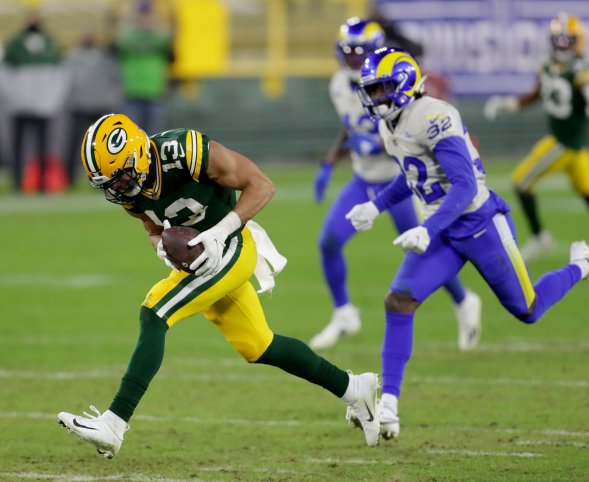 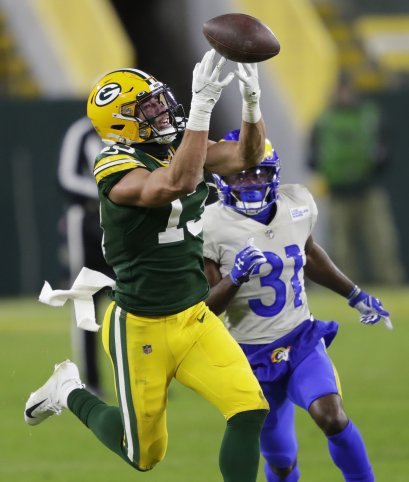 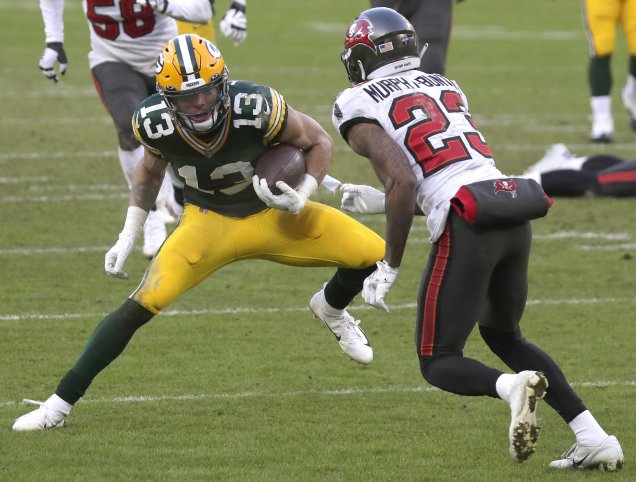