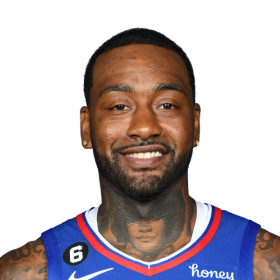 The John Wall Family Foundation strives to improve the quality of life for disadvantaged families and to impact the lives of at-risk youth through mentorship, education and physical activity.

Bright Beginnings seeks to restore and revitalize the quality of life for every child and family experiencing homelessness in Washington, D.C. The children we serve enter kindergarten ready to learn and succeed, and our program serves as a model for other communities in need. Wall donated $400,000 to Bright Beginnings.

Our partners are working together to provide thousands of hot meals and water.

get involved
Leukemia and Lymphoma Society

Wall has worked closely with the Leukemia and Lymphoma Society in Washington D.C., sponsoring a walking team called “Miyah’s Troupe.”

Wall played his first two years of high school basketball at Garner Magnet High School in Garner, North Carolina. After his second season, his family moved to Raleigh and Wall repeated his sophomore year at Needham B. Broughton High School. Despite a very impressive tryout, Wall was cut from the...

Wall played his first two years of high school basketball at Garner Magnet High School in Garner, North Carolina. After his second season, his family moved to Raleigh and Wall repeated his sophomore year at Needham B. Broughton High School. Despite a very impressive tryout, Wall was cut from the Broughton basketball team for attitude-related issues. As a result, Wall transferred from Broughton to Word of God Christian Academy, also in Raleigh. It was in Word of God Christian Academy that Wall began mending his attitude related issues. Wall's coach Levi Beckwith worked with Wall in order for him to stop demeaning his teammates for missed layups and later worked on his facial expressions.

In the summer of 2007, after his second sophomore year of high school, Wall was invited to the 2007 Reebok All-American Camp in Philadelphia. Wall distinguished himself by scoring 28 points against a team that featured future lottery pick Brandon Jennings. In 2008, Wall played in the Elite 24 Hoops Classic. He scored 10 points and earned co-MVP honors with Dominic Cheek, Maalik Wayns and Lance Stephenson.

As a fifth-year senior in 2009 Wall averaged 19.7 points, 9 assists and over 8 rebounds for Word of God Christian Academy and was ranked as one of the best high school basketball players in his class. Wall led Word of God to the North Carolina Class 1A state championship where they were defeated by United Faith Christian Academy 56–53 after United Faith's Ian Miller hit a 40-foot shot at the buzzer. Wall scored 11 points in the game. He was selected to participate in the 2009 Nike Hoop Summit in Portland, Oregon. He scored 13 points to go along with 11 assists and 5 steals. He was also selected to play in the 2009 Jordan Brand Classic at Madison Square Garden where he notched 6 assists.

Wall announced his commitment to attend the University of Kentucky on May 19, 2009.

In his first action as a Wildcat, in an exhibition game against Clarion University of Pennsylvania, Wall led his team with 27 points and 9 assists in 28 minutes of playing time. In his collegiate debut at Kentucky versus Miami University, Wall made the game winning shot with .5 seconds left on the clock to help then #5 ranked Kentucky win. He finished with 19 points, 2 rebounds, 5 assists, and 3 steals. On December 29, 2009, against Hartford, Wall set the Kentucky single-game assist record with 16, 11 in the first half, with only 1 turnover. The mark was previously held by Travis Ford, at 15, and was broken on Ford's 40th birthday. Wall scored 9 points, failing to break double digits for the first time in his college career. On September 22, 2017, Wall was inducted into the University of Kentucky Athletics Hall of Fame.

On April 7, 2010, Wall announced that he would forgo his final three seasons of collegiate eligibility and enter the 2010 NBA draft, where he was expected to be the first overall selection for the Washington Wizards. On May 3, Wall signed with agent Dan Fegan.

On June 23, 2010, Reebok revealed Wall as its latest signing, casting him as the face of its latest basketball shoe, the ZigTech Slash. On June 24, 2010, Wall was drafted as the first overall pick by the Washington Wizards in the 2010 NBA draft. On June 25, 2010, Mayor Adrian Fenty of Washington, D.C. declared June 25 as John Wall Day on a plaque handed to John Wall during his Washington Wizards' presser.

John Wall was named 2011 Rookie Game MVP during the 2011 All-Star Weekend. Wall was also named Eastern Conference Rookie of the Month from January–April and finished second in Rookie of the Year voting behind unanimous selection Blake Griffin and was named to the NBA All-Rookie First Team.

On January 30, 2014, Wall was selected as an East reserve for the 2014 NBA All-Star Game, making this his first of five consectutive All-Star selections. On February 15, 2014, Wall was voted the dunker of the night in the 2014 NBA Slam Dunk Contest, with a double pump reverse assisted by the Wizards' mascot, making it the first win by a Washington Wizard. Wall averaged 19.3 points, 8.8 assists, and 4.1 rebounds on the season as the Wizards finished as the fifth seed in the East and qualified for the playoffs for the first time in six years. They went on to defeat the Chicago Bulls 4 games to 1 in their first round playoff match-up. After defeating the Bulls, Wall and the Wizards lost in the second round to the Indiana Pacers in 6 games.

In 2013, after signing a five-year contract with the Wizards, Wall purchased a home in Potomac for $4.9 million. The two-acre property, which has eight bedrooms, six garages, and 17,980 square feet, was selected to accommodate Wall's mother, siblings, and guests.

In 2016, Wall received the Stewart B. McKinney Award for his work to end homelessness after he donated $400,000 to Bright Beginnings.

John Wall also has a vlog series on BallIsLife, showing the world his life and things he overcomes on and off of the court. 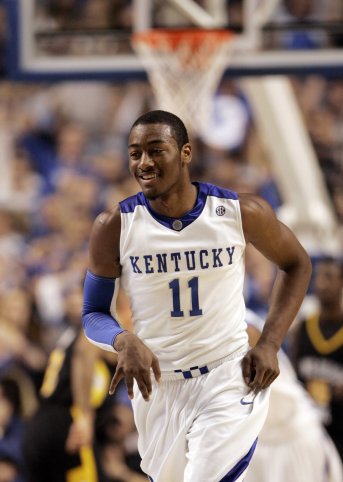 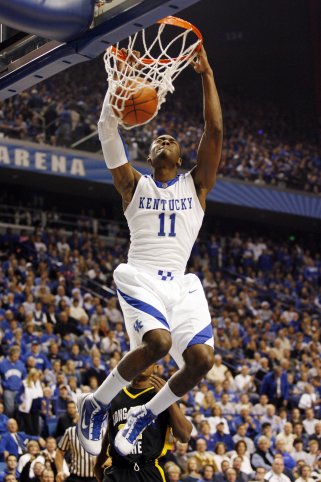 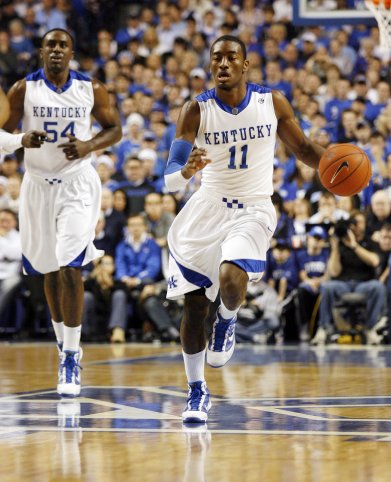 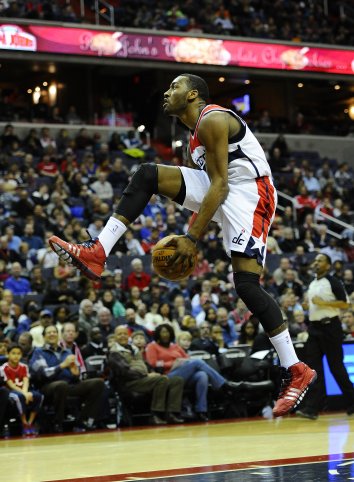 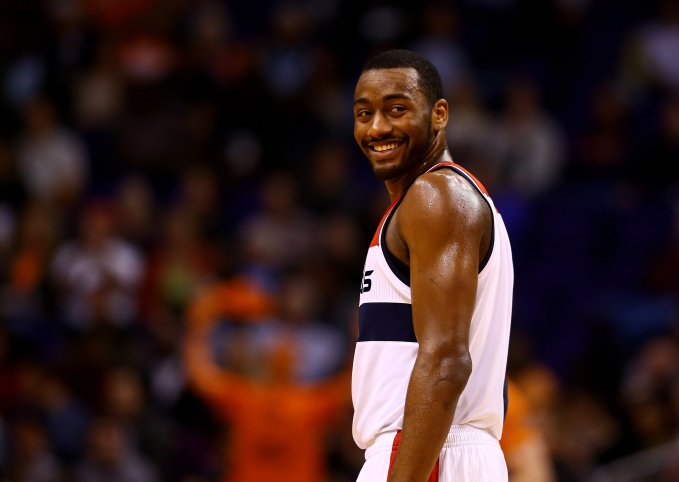 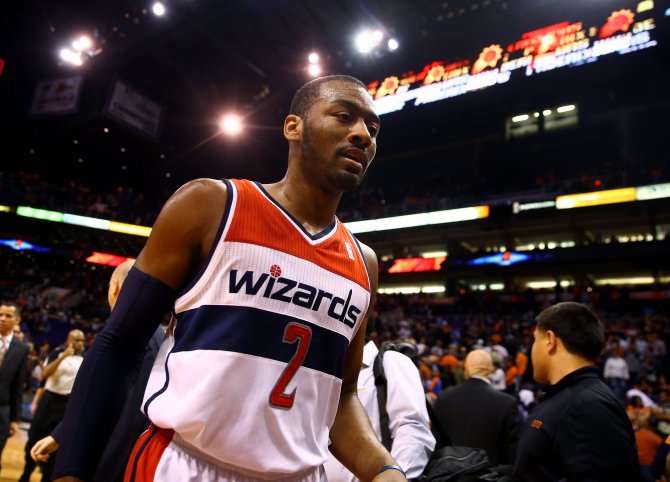 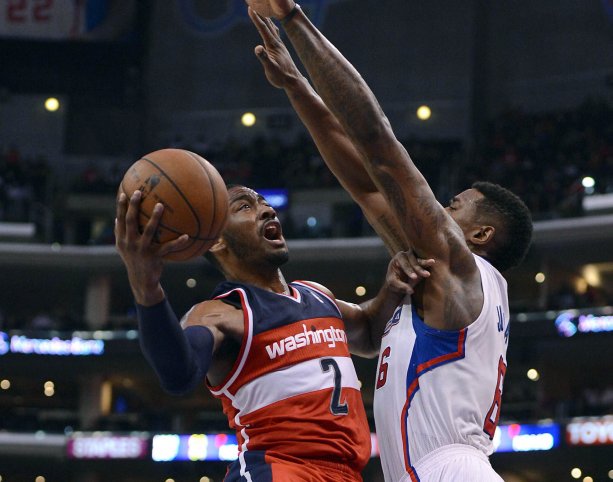 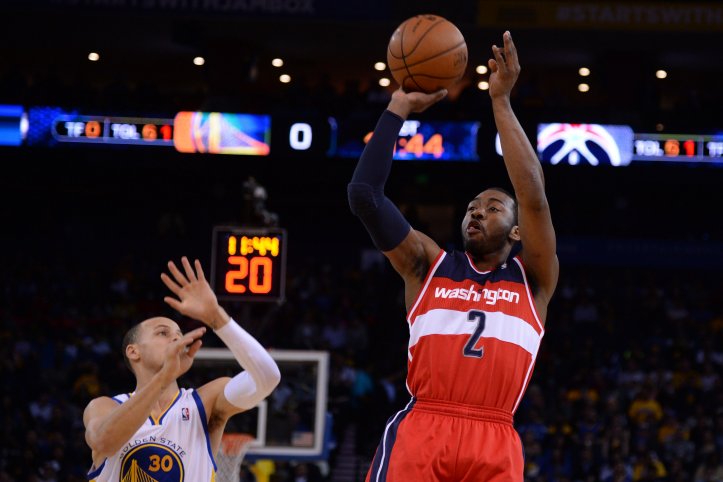 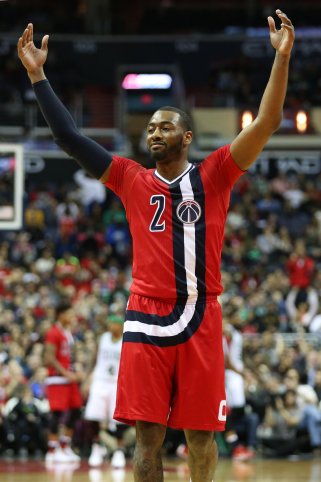 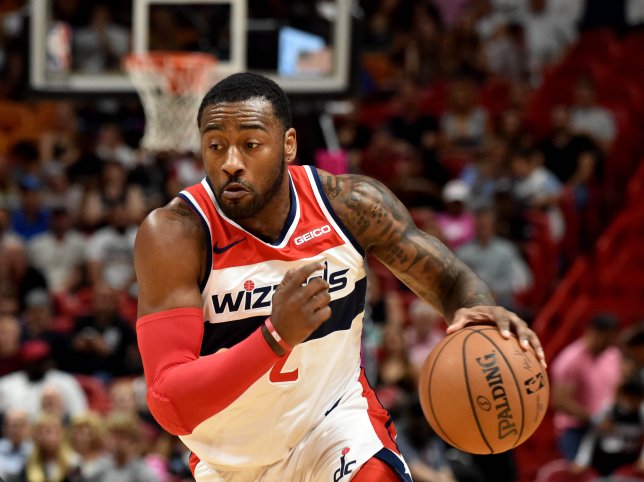 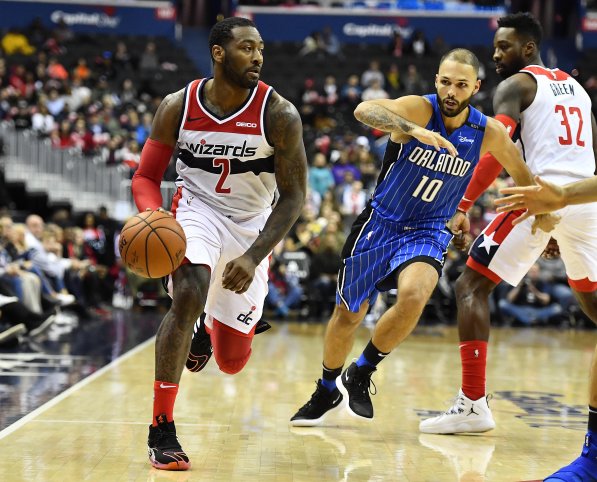 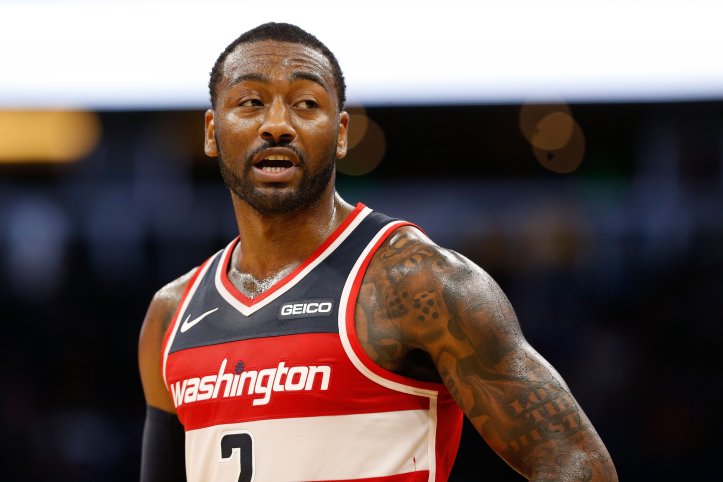 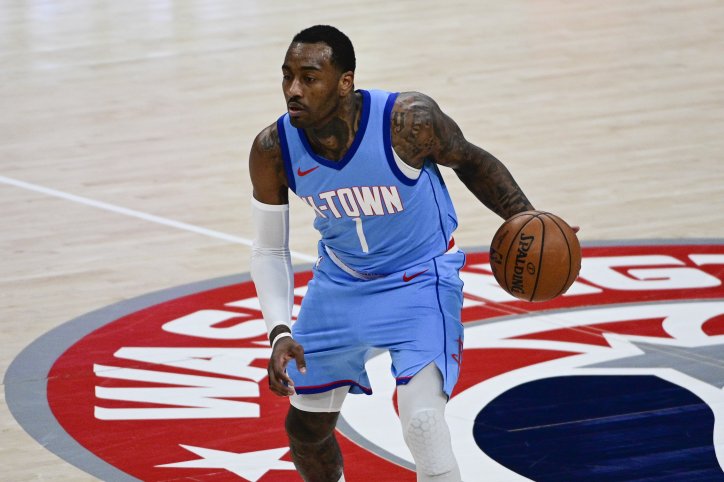 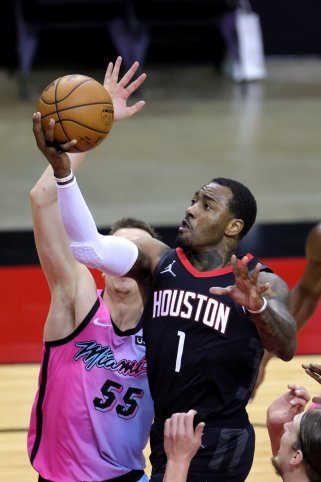 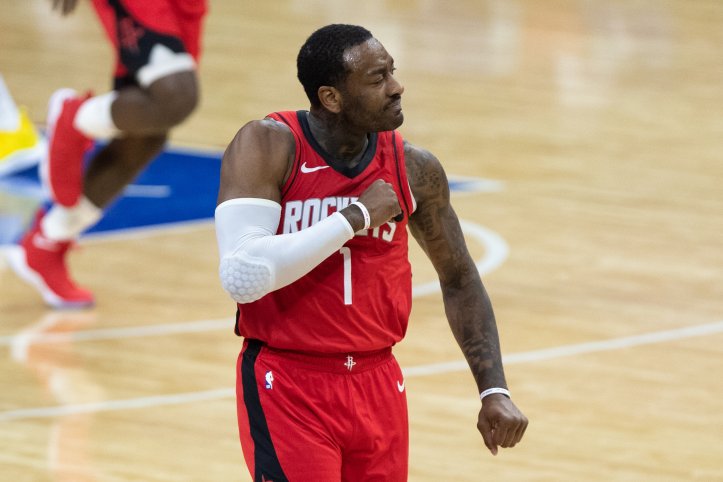 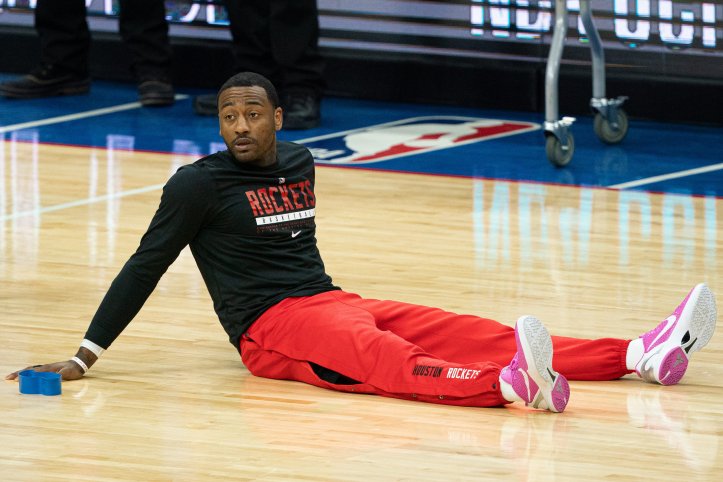 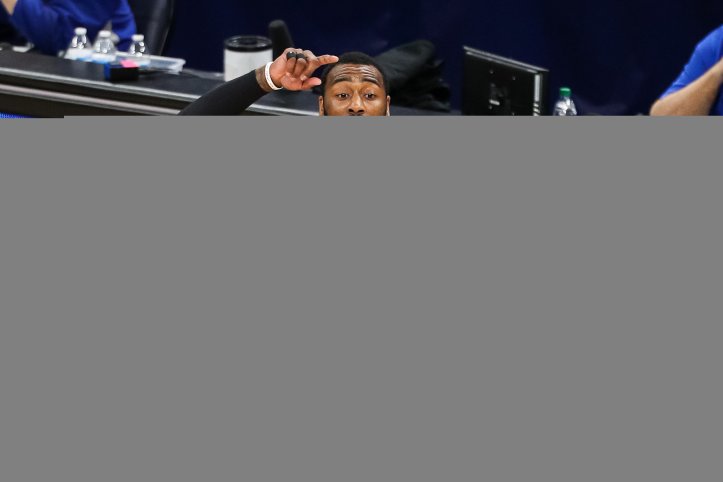 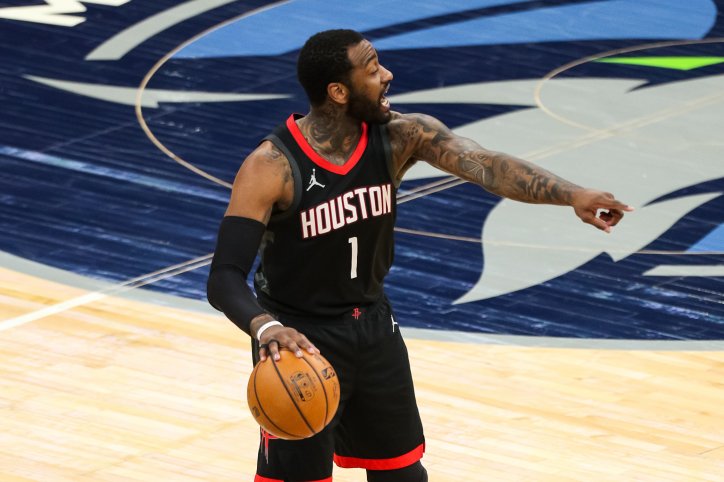 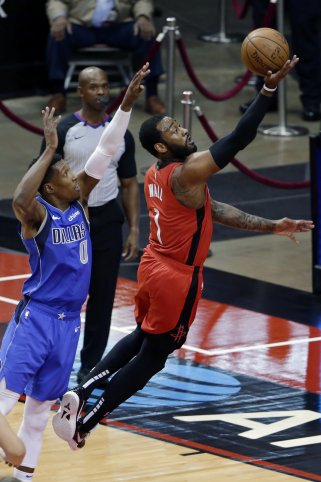 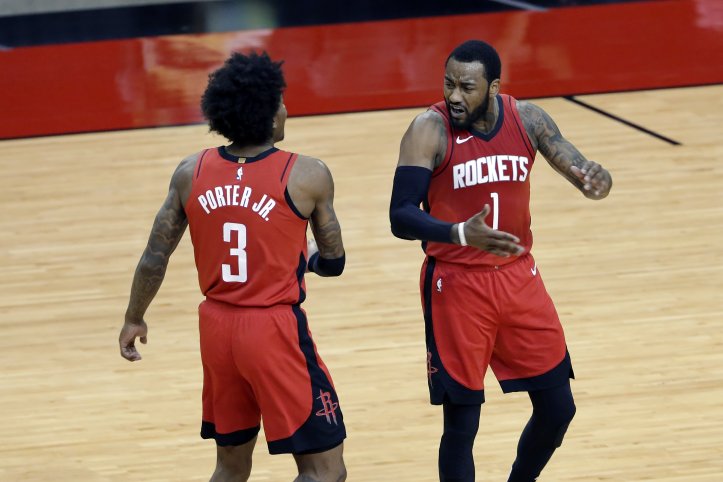