Together, we create life-changing wishes for children with critical illnesses.

He played college soccer at the University of California, Berkeley. In 2008, he was named to the All-Pac-10 first team and the NSCAA Far West All-Region team, and ...

He played college soccer at the University of California, Berkeley. In 2008, he was named to the All-Pac-10 first team and the NSCAA Far West All-Region team, and was also named to Top Drawer Soccer's Team of the Season. During his college years, Frei also played with both San Francisco Seals and San Jose Frogs in the USL Premier Development League.

Frei was named MVP at the 2009 MLS Player Combine in Fort Lauderdale, Florida, and signed a Generation Adidas contract. He was drafted in the first round (13th overall) of the 2009 MLS SuperDraft by Toronto FC.

He made his professional debut on 21 March 2009, in Toronto's first game of the 2009 MLS season against Kansas City Wizards, and soon established himself as the team's first choice goalkeeper. Shortly after Frei was named Toronto FC Player of the Month for April 2009. Frei also won MLS's Save of the Week for week 15 and then three times consecutively for week 24, 25 and 26 of the 2009 season.

He played in 3 games of the 2009 Canadian Championship going 3–0 and ultimately making key saves in the deciding game that ensured Toronto FC would win by at least 4 goals on goal differential and their first trophy.

On 25 April 2010, Frei picked up his first clean sheet of the 2010 season in a 2–0 home win over Seattle Sounders FC. Frei had another standout season as Toronto's first choice keeper. He finished the season with a 1.32 goals-against average and a 70% save percentage, he improved all statistics from his rookie season. It was announced on 18 November 2010 that Frei would graduate from the MLS Generation Adidas program at the end of the 2010 season.

In January 2011, after the hire of Aron Winter as the club's new coach, he stated in an interview that Julian De Guzman, Dwayne De Rosario and Stefan would be the key players of the upcoming season and he was impressed with Frei's abilities. Frei recorded his first clean sheet of the 2011 season in the second game of the year in a 2–0 home victory over Portland Timbers on 26 March. Frei also earned his third assist since playing with Toronto setting up the second goal for Javier Martina, it was later awarded the Goal of the Week in MLS. Following the departure of Toronto captain Dwayne De Rosario in early April, Coach Winter named Maicon Santos as the replacement captain while Frei would become vice captain. On 13 April against Los Angeles Galaxy Frei wore the captain's armband for the first time with Toronto due to an injury to Santos, the game ended in a 0–0 home draw. Frei started most games in the first half of 2011 but faced some injuries, after resting a few games backup keeper Miloš Kocić strung together several strong performances creating a highly competitive environment at the position. At the end of the season it was announced that Frei would be training with Liverpool, and return to Toronto before pre-season training.

After making his season debut against Los Angeles Galaxy on 7 March in the 2011–12 CONCACAF Champions League quarterfinals first leg, Frei sat out the second leg with Kocić being given the start. Much speculation began to arise with rumors of Frei being traded, however the following week he sustained a broken fibula during training. Two weeks later the club announced that Frei would have to undergo surgery to repair ligaments in his left ankle, he is expected to be out for four to six months putting his entire season in jeopardy.

Following a year of recovery, Frei entered the 2013 pre-season as the first choice keeper, however, he suffered a minor injury in training allowing back up Joe Bendik to start in the season opener. Bendik continued to put in strong performances forcing coach Ryan Nelsen to stick with him, Frei earned his first start in over a year in a Canadian Championship match against Montreal Impact on 24 April 2013, the game ended in a 2–0 home victory for Toronto.

Frei was traded to Seattle Sounders FC on 10 December 2013 in exchange for a conditional pick in the 2015 MLS SuperDraft.

Frei was one of the best goalkeepers in the league during the 2016 MLS Season, keeping eight clean-sheets in 33 appearances (the joint fourth-most kept by a goalkeeper that season), as Seattle qualified for the playoffs after finishing fourth in the Western Conference. He only conceded three goals in the MLS Cup playoffs, keeping four clean sheets in six postseason matches. Frei was named MLS Cup 2016 MVP after making seven saves in regular play, and another in the 5–4 penalty shoot-out victory in the final against his former club, Toronto, following a 0–0 draw after extra-time; his decisive save on Jozy Altidore's header in the second half of extra-time was later described by the MLSSoccer.com reporter Sam Stejskal as "one of the best saves in MLS Cup history."

Throughout the 2017 MLS season, Frei confirmed himself as one of the league's best goalkeepers once again: he started 33 games throughout the regular season, making 84 saves over the course of the year for a 69.4 per cent save percentage, and averaging 1.09 goals against per game, while also managing to keep 13 clean sheets, more than any other goalkeeper. In the Playoffs, Frei only made four saves en route to the MLS Cup final, but kept four consecutive clean sheets, as Seattle reached the final without conceding a goal. On 9 December 2017 he started in the 2017 MLS Cup Final against his former club Toronto FC at BMO Field, a rematch of the previous season's final; Toronto won the match 2–0 to complete an unprecedented treble of the MLS Cup, the Supporters' Shield, and the Canadian Championship, but Frei drew praise in the media for his performance throughout the match, following a string of impressive saves to keep the score level at half time, and made nine stops overall within the first hour of play. He finished in third place in the MLS Goalkeeper of the Year Award, behind Tim Melia and Andre Blake. The following year, he placed second in the award, behind only Zack Steffen. 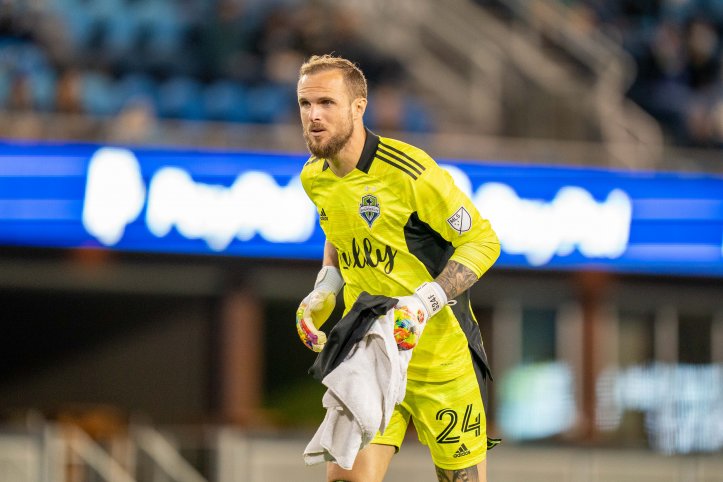 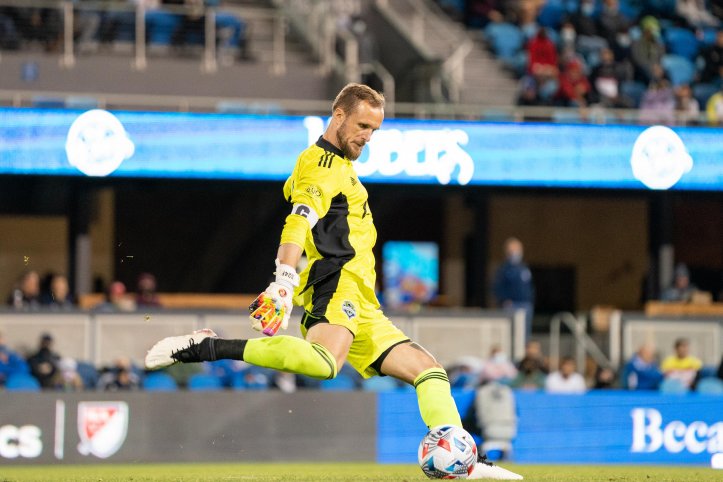 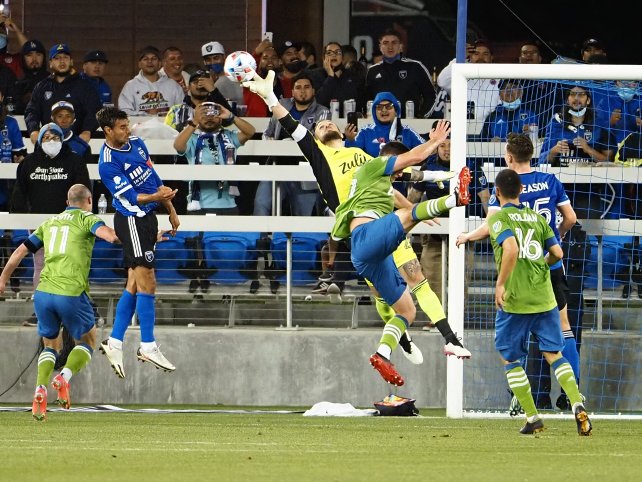 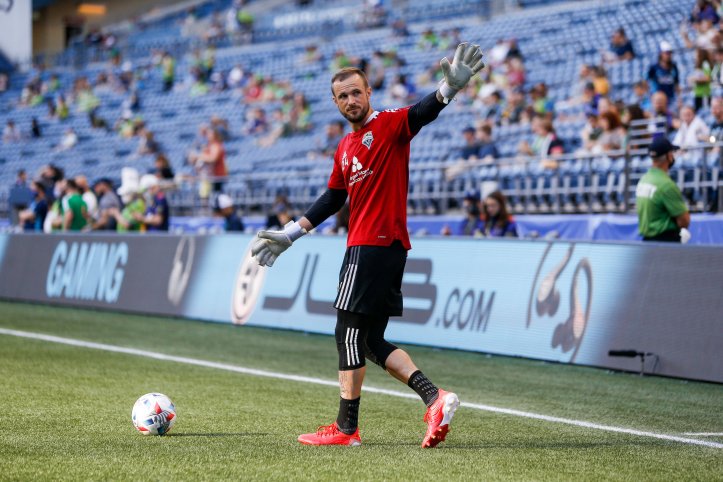 RT @albertlee1939: This is sandwich goals! @SoundersFC goalie and captain @Stefan24Frei, joined us to create this Opened Faced PLT from Pin…

RT @ZScottFanClub: The limited-edition 'watters' @glassybaby sold out in nearly 90 minutes, but the story behind this special collaboration…

RT @SkySportsPL: Arsenal players have been starring in adverts to promote local businesses owned by Gunners fans 🎥 From bars to barbers, t…

PvE?!?! Was hoping for it with the bleeding Prowler story hints, but possibly spiders and birds as well!? Ummm this would be 🔥 https://t.co/7WoWhdwhOg