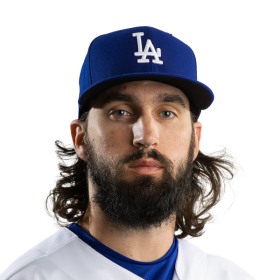 A fundraiser committed to helping children and families with rare and undiagnosed diseases. In honor of Brooks Hill and in support of Dr. Sweetser.

Gonsolin attended Vacaville High School in Vacaville, California. As a senior, he went 4-1 with a 2.60 ERA. After going undrafted in the 2012 MLB draft, he enrolled and played college baseball at St. Mary's College of California. He entered college as an under-developed 18-year-old and left a mu...

Gonsolin attended Vacaville High School in Vacaville, California. As a senior, he went 4-1 with a 2.60 ERA. After going undrafted in the 2012 MLB ...

Gonsolin attended Vacaville High School in Vacaville, California. As a senior, he went 4-1 with a 2.60 ERA. After going undrafted in the 2012 MLB draft, he enrolled and played college baseball at St. Mary's College of California. He entered college as an under-developed 18-year-old and left a much more mature player. The Dodgers found that maturity and drafted Gonsolin as a two-way player in the ninth round of the 2016 draft. He entered the league as a reliever throwing in the low to mid-90s and ready for whatever it was the team needed whenever the team needed him to do it.

Gonsolin spent his first professional season with the Ogden Raptors and Great Lakes Loons, pitching to a combined 1-2 record with a 3.77 ERA in 19 relief appearances. In 2017, he spent his season with Great Lakes and Rancho Cucamonga Quakes where he went 7-6 with a 3.86 ERA in 42 games. After spending his first two seasons as a relief pitcher, he converted into a starter in 2018. Gonsolins velocity jumped from the low-90s to triple-digits and that offseason he moved to the rotation. He started the season with Rancho Cucamonga and was promoted to the Tulsa Drillers during the season. In 26 starts with both teams, he went 10-2 with a 2.60 ERA. Through 2018, Gonsolin ended the season tied with Clayton Kershaw for the most strikeouts in the organization from the rookie ball through the major leagues. Tony owned a 2.60 ERA in 128 innings with 155 strikeouts. He was named the Dodgers minor league pitcher of the year.

Gonsolin began 2019 with the Oklahoma City Dodgers, and was called up to the Dodgers on June 26 to make his debut as the starting pitcher against the Arizona Diamondbacks. He pitched four innings, allowing six runs (four earned) on six hits with three strikeouts. He also singled to center field in his first major league at-bat. On July 30, in his second MLB game, Gonsolin picked up his first career save against the Colorado Rockies after pitching four innings of relief in a 9–4 win. On August 5, Gonsolin picked up his first major league win after pitching six shutout innings against the St. Louis Cardinals. He allowed only two hits and one walk, while striking out seven batters. He pitched 40 innings in 11 games for the Dodgers, with six starts, and finished with a 4–2 record and a 2.93 ERA.

In the pandemic-shortened 2020 regular season, Gonsolin went 2–2 with a 2.31 ERA, in nine games (eight starts) during which he struck out 46 batters in 46+2⁄3 innings. In the postseason, he made two appearances in the NLCS, starting game two and appearing in relief in game seven. He pitched a total of 61⁄3 innings, allowing seven runs and picking up the loss in game two. In the World Series, he was selected by Dodgers manager Dave Roberts to start Game 2, on two days rest, against the Tampa Bay Rays. He only pitched 1+1⁄3 innings in the game and allowed one earned run on one hit and one walk as he was awarded the loss in the game. He also got the start in Game 6, and this time pitched 1+2⁄3 innings while allowing one run on three hits and two walks, however the Dodgers came from behind to win that game and clinch the championship. Gonsolin received eleven votes in 2020 National League Rookie of the Year voting, finishing in fourth place.

Gonsolin began the 2021 season on the opening day roster but did not appear in a game before he was placed on the injured list on April 4 with right shoulder inflammation. After a few rehab starts, he was activated on June 9th to rejoin the Dodgers starting rotation. His shoulder started hurting again towards the end of July and he was put back on the injured list on July 31. After missing another month, he returned on September 9. He made 13 starts (and two relief appearances) for the Dodgers in 2021, with a 4–1 record and a 3.23 ERA. 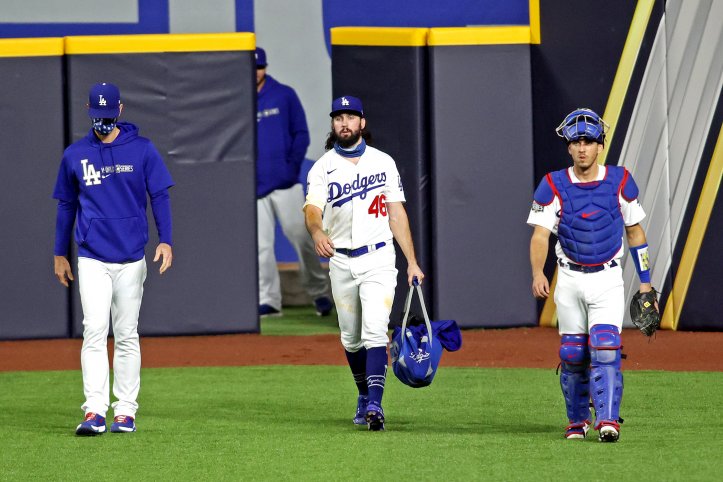 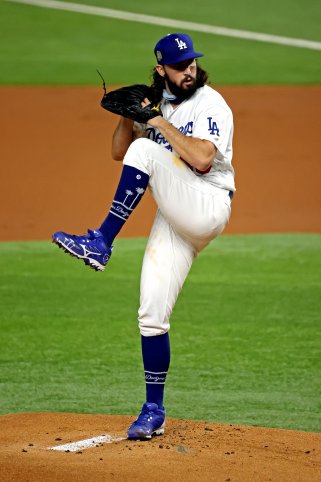 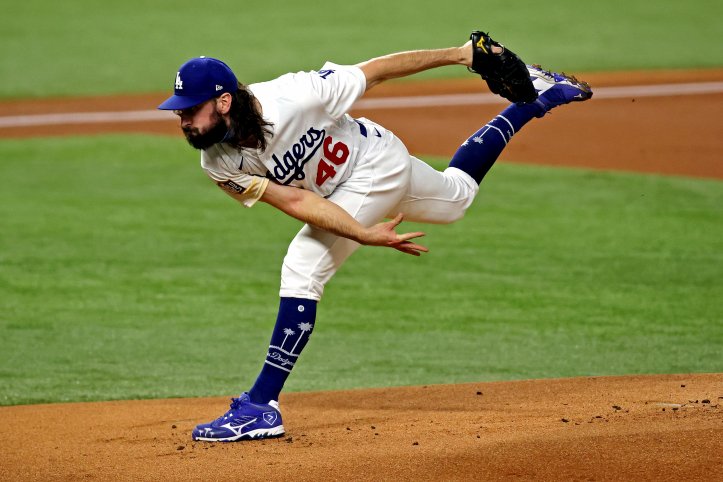 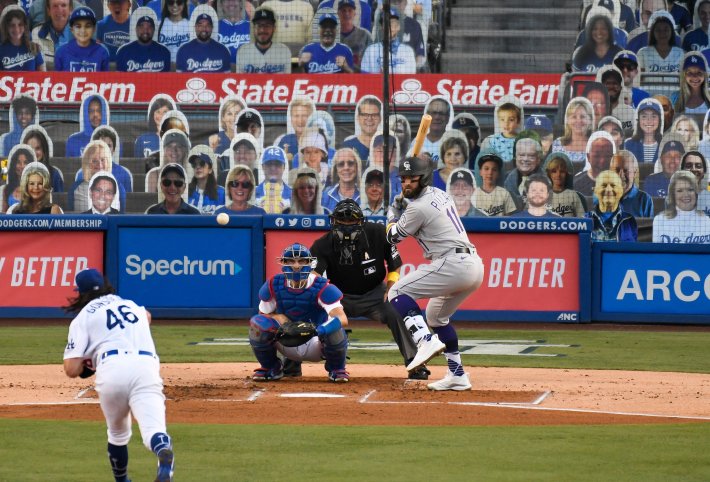 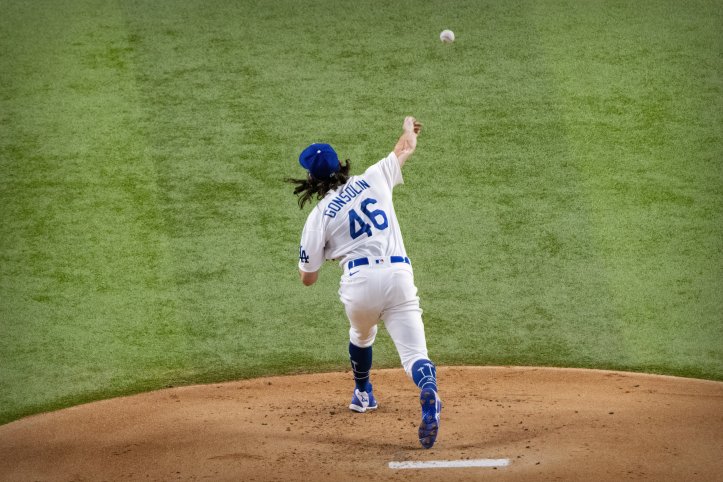 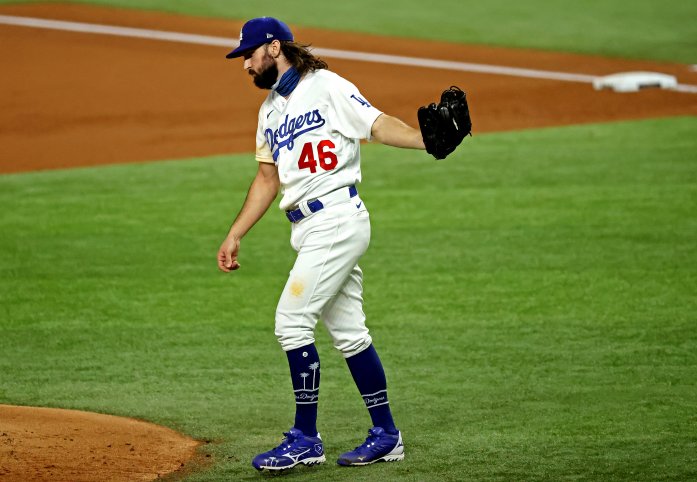