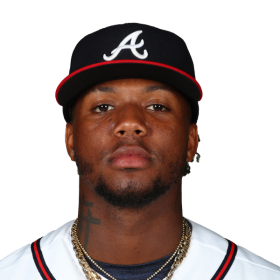 Children need specialized pediatric care. Our team is committed to caring for your child and making sure they are better today for a healthier tomorrow.

Acuña signed with the Atlanta Braves for $100,000 as an international free agent in July 2014. He made his professional debut in 2015 with the Gulf Coast Braves and was later promoted to the Danville Braves that season. In 55 games between the two teams he batted .269 with four home runs, 18...

Acuña signed with the Atlanta Braves for $100,000 as an international free agent in July 2014. He made his professional debut in 2015 with the Gulf Coast Braves and was later promoted to the Danville Braves that season. In 55 games between the two teams he batted .269 with four home runs, 18 RBIs, and 16 stolen bases.

In 2016, he slashed .312/.392/.429 with four home runs and 19 RBIs in only 42 games combined between the Gulf Coast Braves and Rome Braves due to an injury. After the season, he played for the Melbourne Aces of the Australian Baseball League and was named an ABL All-Star. Acuña made his first appearances in Grapefruit League games at the start of the 2017 season as an extra player originally assigned to minor league camp. He began the year with the Florida Fire Frogs of the Class A-Advanced Florida State League and was later promoted to the Mississippi Braves of the Class AA Southern League. Acuña was named to the All-Star Futures Game roster in July, and played the whole game, one of three World Team members to do so. He reported to the Gwinnett Braves of the Class AAA International League immediately after the All-Star break, making his International League debut against the Charlotte Knights, during which he hit an opposite-field home run in his second at bat. For the year, Acuña appeared in 139 games, hitting .325/.374/.522 with 21 homers, 82 RBIs and 44 stolen bases.

After the 2017 minor league regular season ended, Acuña was invited to join the MLB's premier elite prospect finishing school, the Arizona Fall League and was assigned to the Peoria Javelinas. He played 23 games in the AFL hitting .325/.414/.639 alongside seven home runs, winning the league championship and claiming league MVP honors, becoming the AFL's youngest most valuable player.

Baseball America ranked Acuña as the No. 1 Major League Baseball prospect heading into the 2018 season. MLB.com ranked him second to Japanese pitcher/hitter Shohei Ohtani. Acuña began the year at major league spring training. Despite a .432 average and four home runs in spring training, Acuña was reassigned to minor league camp on March 19, 2018. He reported to the Gwinnett Stripers to begin the 2018 season.

On April 25, 2018, the Braves promoted Acuña to the major leagues. This made him the youngest player in Major League Baseball at that time, claiming the distinction from teammate Ozzie Albies. Though Acuña wore uniform number 24 throughout his minor league career in honor of Miguel Cabrera, he made his major league debut on April 25, 2018, wearing number 13. Against the Cincinnati Reds, Acuña collected his first career hit off Kevin Shackelford. He finished the game 1 for 5 and scored the game tying run in the eighth inning as the Braves won 5–4. The next day, also against the Reds, Acuña hit his first major league home run off Homer Bailey.

Acuña regularly hit in the leadoff spot in the lineup after the All-Star break. His performance improved markedly as he implemented an adjustment to his batting stance at the suggestion of Kevin Seitzer. While playing against the Miami Marlins on August 13, 2018, Acuña became the fourth player in the history of Major League Baseball to hit a home run to lead off both games of a doubleheader. Additionally, he had hit a home run in his last four games, becoming the youngest player since 1920 to accomplish the feat. By hitting a home run off Trevor Richards on August 14, Acuña became the youngest major leaguer ever to hit home runs in five consecutive games, as well as the fifth batter in Atlanta Braves history to do so. Facing Adam Conley later that same game, Acuña hit his second home run of the night, marking the first time he had ever hit more than one home run in a game.

In the finale of the Braves' series against the Marlins on August 15, Acuña faced José Ureña, who hit him with the first pitch of the game. Ureña was ejected from the game, while Acuña was replaced in the field at the top of the second inning. Acuña played the Braves' next game against the Colorado Rockies on August 16. When Acuña next played the Marlins on August 23, he hit another home run, and was subsequently struck by another pitch. His production during the month of August won him the Major League Baseball Rookie of the Month Award. On September 2, Acuña hit his seventh leadoff home run, tying a Braves team record, set by Marquis Grissom, for such home runs in a season. Three days later, Acuña broke the team's leadoff home run record in a game against the Boston Red Sox. With his 25th home run on September 9, Acuña became the seventh player in MLB history to hit that many home runs while under the age of 21. Later that month, it was announced that Acuña would be playing in the MLB Japan All-Star Series scheduled for November. With his fifteenth stolen base on September 22, 2018, Acuña became the fourth player in MLB history to record a 25–15 season, while aged 20 or below, alongside Alex Rodriguez, Orlando Cepeda, and Mike Trout. Overall with the 2018 Braves, Acuña appeared in 111 MLB games, batting .293 with 26 home runs and 64 RBIs.

On October 7, in a National League Division Series game against the Los Angeles Dodgers, Acuña became the youngest player in MLB history to hit a postseason grand slam, aged 20 years 293 days, off Dodgers pitcher Walker Buehler. On November 12, he was named the National League Rookie of the Year.

On April 2, 2019, Acuña and the Braves agreed to an eight-year contract worth $100 million. The extension included team options for the 2027 and 2028 seasons. Aged 21, Acuña became the youngest player in baseball history to sign a contract worth at least $100 million. Acuña's deal was the largest for any player with less than one year of major league service. By June 2019, Acuña had drawn attention for his power production. At midseason, he was named a starting outfielder for the National League in the 2019 Major League Baseball All-Star Game, and invited to take part in that year's Home Run Derby.

On August 9, Acuña hit his thirtieth home run of the 2019 season while facing Marlins pitcher Tayron Guerrero. Acuña joined the 30–30 club on August 24, in a game against the New York Mets. He became the second-youngest player to reach the milestone, after Mike Trout. With his fortieth home run on September 19, Acuña became the youngest major leaguer to enter the 40–30 club. He reported a minor injury in the penultimate series of the Braves' 2019 season, and was rested for the remainder of the regular season. 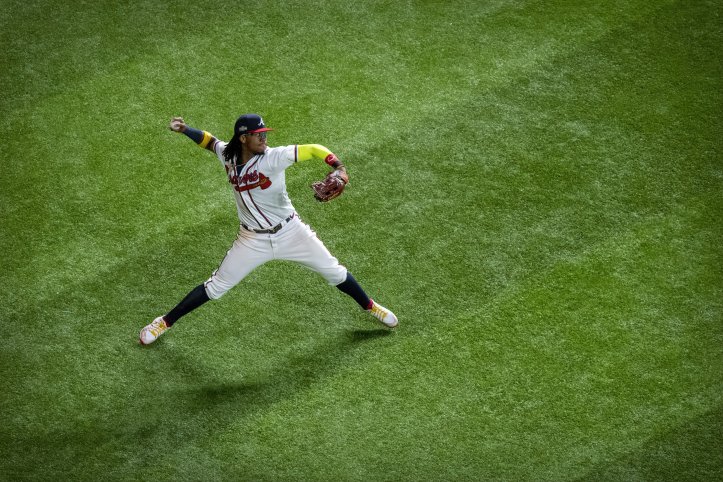 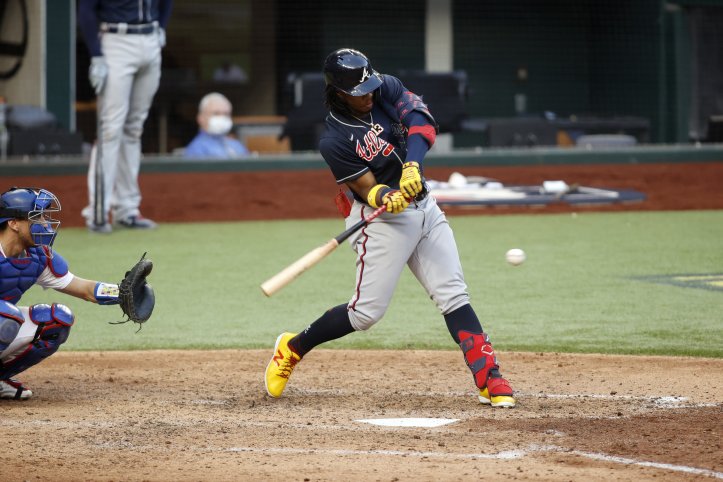 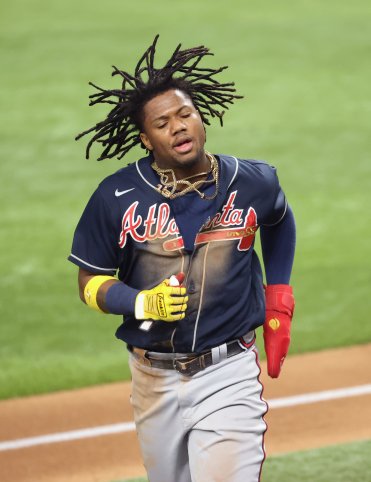 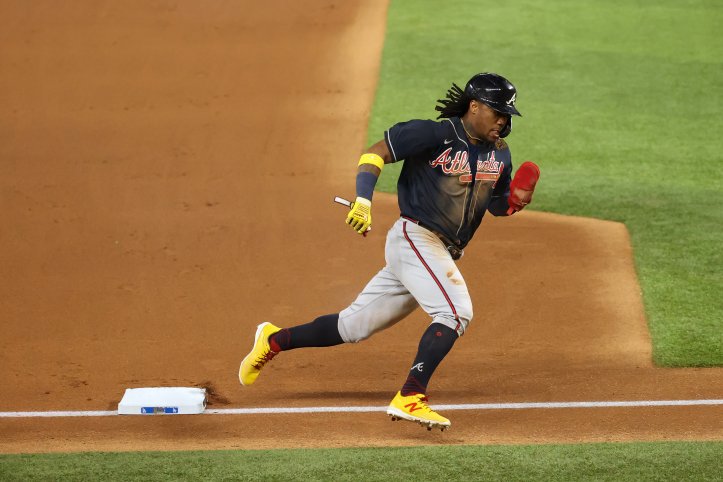 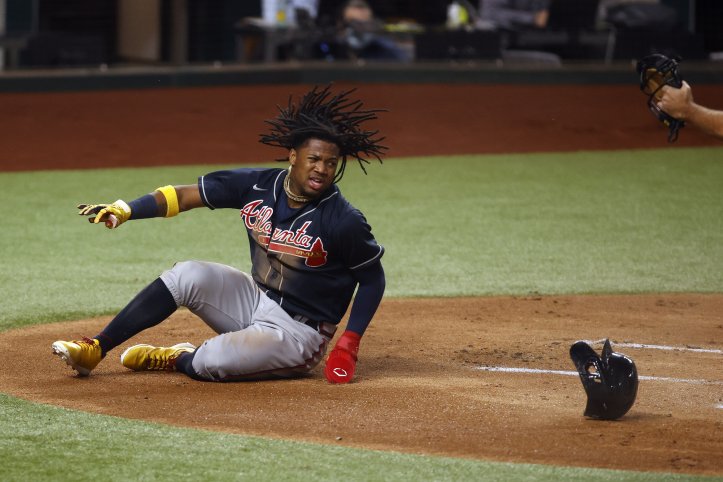 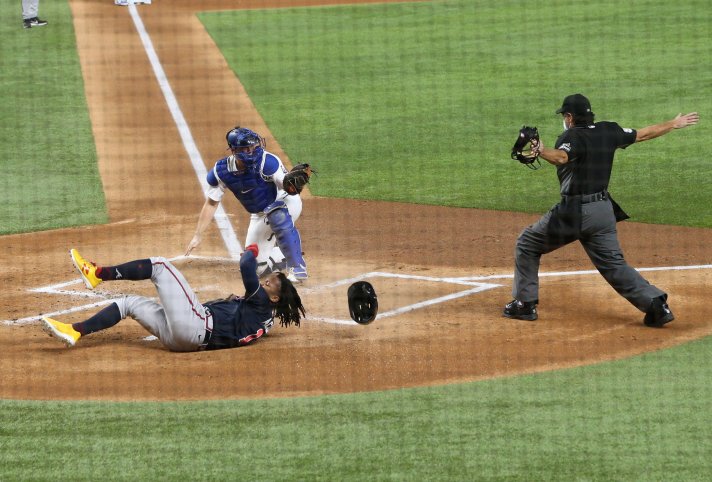 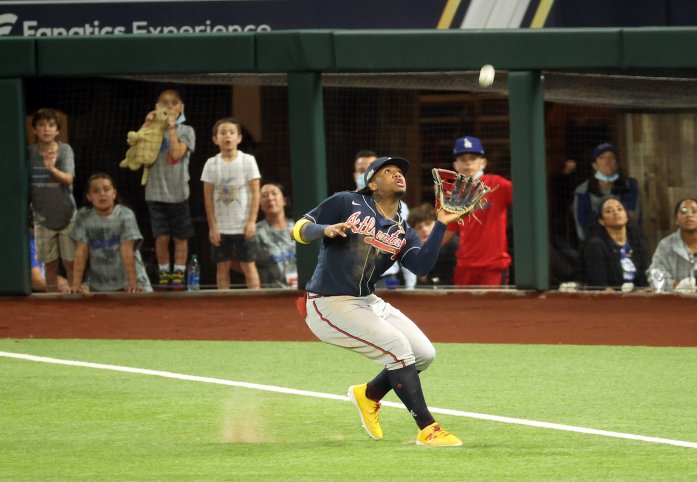 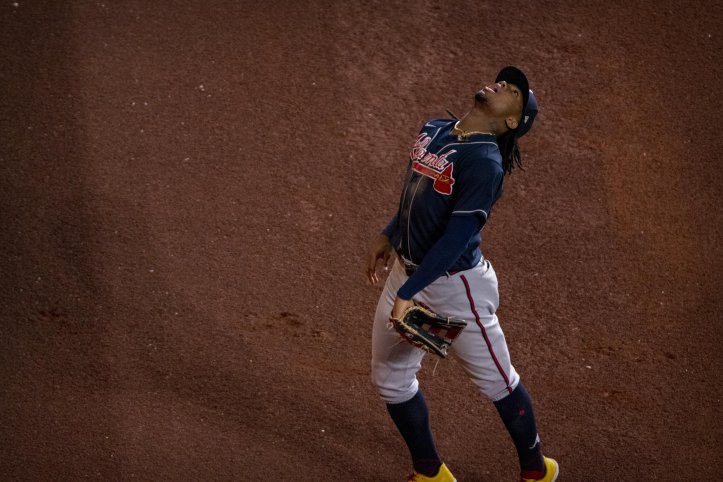 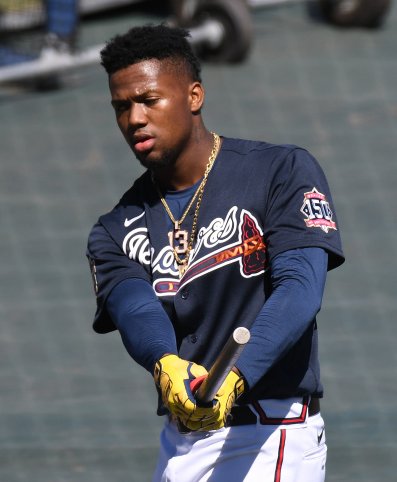