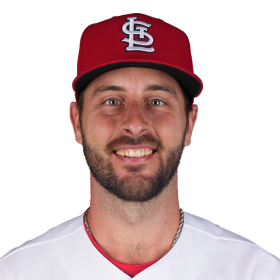 The mission of RMHC is to create, find and support programs that directly improve the health and wellbeing of children. Guiding us in our mission are our core values: Lead with compassion. Focus on the critical needs of children.

DeJong graduated from Antioch Community High School in 2011. As a senior, he batted .430 with four home runs and 30 RBIs, leading his team to a 21-10 record.

After graduating high school, he then attended Illinois State University (ISU) where he played college baseball for the Redbirds. ...

DeJong graduated from Antioch Community High School in 2011. As a senior, he batted .430 with four home runs and 30 RBIs, leading his team to...

DeJong graduated from Antioch Community High School in 2011. As a senior, he batted .430 with four home runs and 30 RBIs, leading his team to a 21-10 record.

After graduating high school, he then attended Illinois State University (ISU) where he played college baseball for the Redbirds. He was a preferred walk on. As a freshman in 2013, he batted .260 in 100 at bats with no home runs. After increasing his dedication to weight training between his freshman and sophomore years, DeJong noted, he gained approximately 20 pounds (9.1 kg) of muscle mass, and in strength and speed, thus improving his play on the field. In 2014, he played second base, third base, and catcher, batting .349 with nine home runs and 48 runs batted in (RBIs). After the 2014 season, the Pittsburgh Pirates chose DeJong in the 38th round of the Major League Baseball (MLB) draft as a catcher. He did not sign with the Pirates and instead returned to Illinois State.

In 2015, DeJong batted .333 while leading the Redbirds in hits (70), runs scored (47), doubles, home runs (14), and RBIs (48). He played four positions including shortstop, second base, third base, and catcher, and also appeared at designated hitter. He was named All-Missouri Valley Conference first team as a utility player. He also earned Academic All-District honors for District 5.

A graduate of ISU in 2015 with a degree in biochemistry with a pre-medical emphasis, DeJong still had one year of college baseball eligibility remaining. Baseball America ranked him as the 108th-best prospect for the 2015 MLB draft. The St. Louis Cardinals selected him in the fourth round (131st overall). The Cardinals were intrigued not only by DeJong's baseball talents, but also by his preparation in academics, having graduated with a 3.74 GPA and a plan to attend medical school in case a career in professional baseball would not have worked out.

DeJong signed with the Cardinals for $200,000, and made his professional debut with the Johnson City Cardinals of the Rookie-level Appalachian League. After ten games, he was promoted to the Peoria Chiefs of the Class A Midwest League. In 66 games between the two teams, he batted .316/.394/.516 with nine home runs and 41 RBIs. In 2016, he played for the Springfield Cardinals of the Class AA Texas League, and was selected as a Texas League All-Star. He finished the 2016 season batting .260 with 22 home runs and 73 RBIs in 132 games. After the season, the Cardinals assigned DeJong to the Glendale Desert Dogs of the Arizona Fall League (AFL).

To begin the 2017 season, the Cardinals assigned DeJong with the Memphis Redbirds of the Class AAA Pacific Coast League (PCL). In 46 games, he batted .294 with 11 home runs and 31 RBIs prior to his first major league promotion. On defense, had made 37 appearances at shortstop, four at second base and three at third base. The Cardinals promoted DeJong to the major leagues on May 28, 2017, as they moved second baseman Kolten Wong to the disabled list (DL).

DeJong made his major league debut on May 28, 2017, at Coors Field versus the Colorado Rockies. Facing Greg Holland in his first at bat, DeJong hit a home run on his first swing, becoming the ninth Cardinals player to homer in his first at bat in the major leagues. On July 8 versus the New York Mets, he set both a Cardinals shortstop and a number eight hitter record with four extra base hits in one game, including three doubles and one home run. The next day, DeJong set a rookie record for extra-base hits in a three-game series with seven. After batting .298/.347/.638 (.985 OPS) with eight home runs and 16 RBI in the month of July, DeJong was named the National League (NL) Rookie of the Month. He was the first Cardinals' player to win the award since Wong in May 2014. DeJong became the starting shortstop in June after Aledmys Diaz was optioned to Memphis.

On August 19, DeJong hit his 20th home run, versus Juan Nicasio, becoming just the fourth Cardinals rookie to do so, in a 6−4 loss to the Pittsburgh Pirates. DeJong finished his 2017 rookie campaign with a .285 batting average, 25 home runs, and 65 RBIs, leading National League shortstops in home runs. Only Albert Pujols had hit more home runs as a rookie in club history, doing so in 2001. DeJong's combined output between Memphis and St. Louis in 2017 included 38 home runs. He placed second in the 2017 NL Rookie of the Year balloting behind Cody Bellinger, who won unanimously.

On March 5, 2018, DeJong agreed to a six-year contract extension with St. Louis through the 2023 season worth a guaranteed total of $26 million. The deal also includes two option years for a maximum value of $51.5 million. It is the largest ever agreement with a player who had not yet completed at least one full year of major league service.

DeJong returned in 2018 as the Cardinals' starting shortstop. His first multi-home run game came on April 1, 2018, as he hit two home runs to help lead the Cardinals to a 5-1 victory over the New York Mets. He was placed on the disabled list for the first time in his career on May 18 with a fractured left hand caused from being hit in that hand the previous night that required surgery. Over 41 games prior to the injury, he slashed .260/.351/.473 with eight home runs and 19 RBIs. He was activated on July 6, and returned to the lineup that night. DeJong finished his 2018 campaign batting .241 with 19 home runs and 68 RBIs in 115 games.

Batting .261 with 13 home runs and 36 RBIs, DeJong was selected to represent the Cardinals at the 2019 Major League Baseball All-Star Game. On July 24, while playing the Pittsburgh Pirates at PNC Park, DeJong hit three home runs, becoming the first St. Louis shortstop ever to accomplish that feat. DeJong finished the 2019 regular season slashing .233/.318/.762 with thirty home runs and 78 RBIs over 159 games.

He helped Dr. Lawrence Rocks test the effects of heat on the baseball back in 2017, finding that, yes, there is an ideal temperature to make the ball soar. 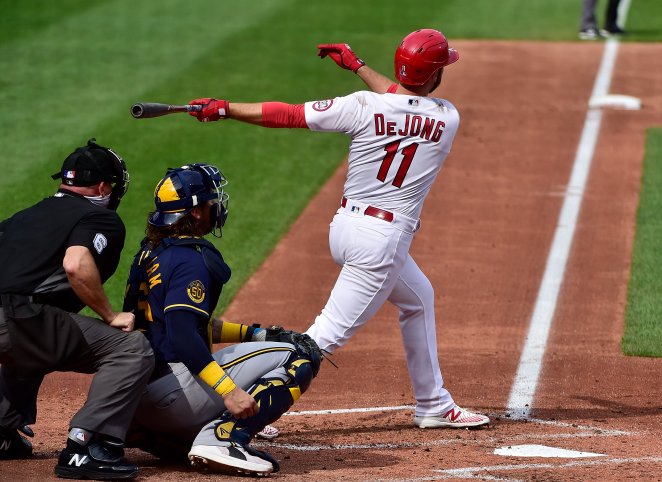 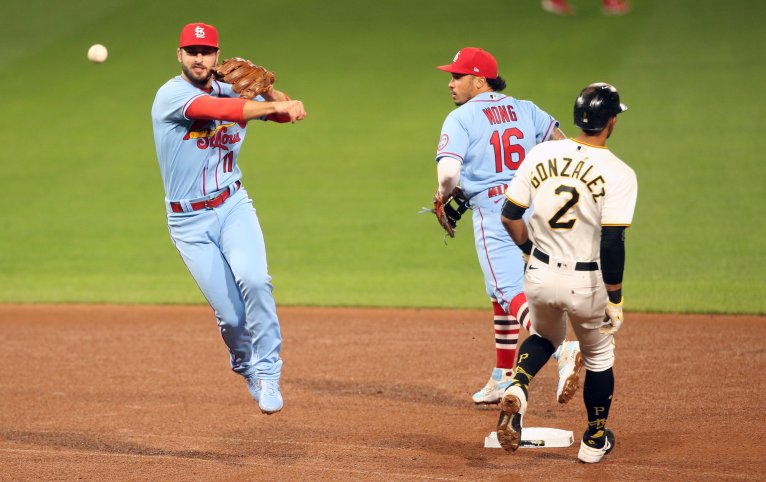 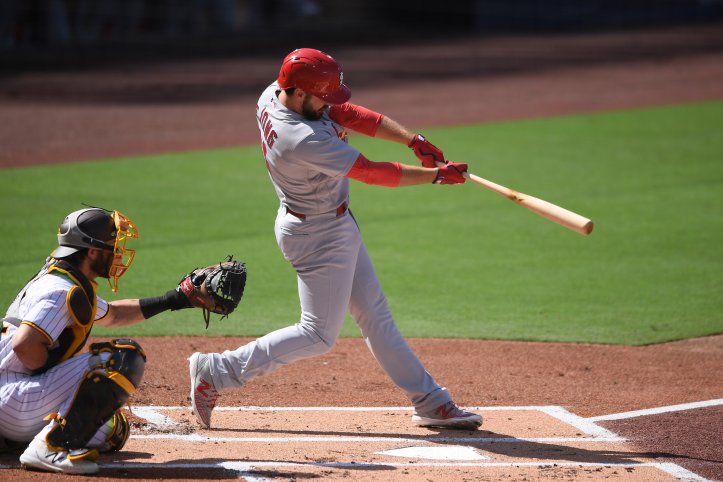 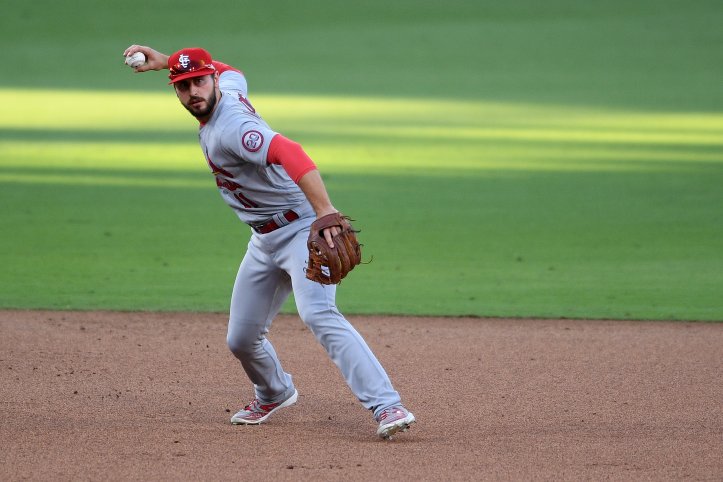 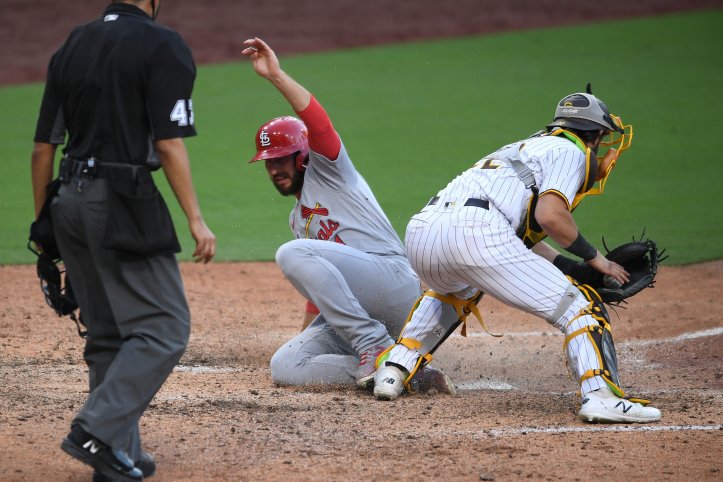