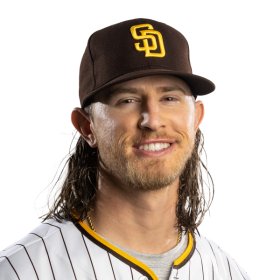 Brewers Community Foundation harnesses the pride, passion and commitment of Brewers fans, players and other supporters to positively impact the lives of children and their families in Greater Milwaukee and Wisconsin.

We hope to lessen these burdens so families can focus on helping their loved one heal. The Milwaukee VA Fisher House is conveniently located on the Milwaukee VA Medical Center grounds and offers 16 bedroom suites of varying layouts to accommodate single travelers or larger families at no cost to them. Designed with the interactions of guests in mind, guests experience the feeling of being home with a shared common kitchen, laundry room, dining room, living room, family room and a large patio and yard. Families share meals together and support each other through their joys and sorrows.

The USO strengthens America’s military service members by keeping them connected to family, home and country, throughout their service to the nation.

VA is determined to pursue the noble purpose to collect, preserve and provide access to its expansive history in order to tell the full story of the Department of Veteran Affairs and its predecessor organizations. As part of that, the VA History Office in conjunction with other VA partners works to provide a central resource for the collection and study of the department.

Athletes Brand helps athletes find a cause and make a difference through limited edition art and apparel collaborations.

We are excited to announce the formation of the MLF Foundation and the mission to further the sport of bass fishing and protect the waters we all love to fish. The MLF Foundation is a 501c3 and will be leading the bass fishing industry to make sure our sport is carried on for generations to come.

Hader attended Old Mill High School in Millersville, Maryland, where he played for the school's baseball team. As a senior, Hader had a 10–0 win–loss record, a 0.30 earned run average (ERA), and 125 strikeouts. He also had a batting average above .400.

After graduating from high school, Hader ...

Hader attended Old Mill High School in Millersville, Maryland, where he played for the school's baseball team. As a senior, Hader had a 10–0 win–lo...

Hader attended Old Mill High School in Millersville, Maryland, where he played for the school's baseball team. As a senior, Hader had a 10–0 win–loss record, a 0.30 earned run average (ERA), and 125 strikeouts. He also had a batting average above .400.

After graduating from high school, Hader was prepared to enroll at Anne Arundel Community College. The Baltimore Orioles selected Hader in the 19th round of the 2012 Major League Baseball (MLB) Draft, with the 582nd overall selection. He signed with the Orioles for a $40,000 signing bonus, rather than attend Anne Arundel. Beginning his professional career, Hader's fastball velocity increased from 84 to 88 miles per hour (135 to 142 km/h) as a high school player to 94 to 95 miles per hour (151 to 153 km/h) as he changed his workout routine.

Hader played for the Gulf Coast Orioles in the Rookie-level Gulf Coast League and the Aberdeen Ironbirds of the Class A-Short Season New York–Penn League, allowing only 14 hits and nine walks while striking out 48 in 28 2⁄3 innings pitched. In 2013, the Orioles assigned Hader to the Delmarva Shorebirds of the Class A South Atlantic League (SAL). He appeared in the SAL All-Star Game, and through July 31, pitched to a 3–6 record with 79 strikeouts and a 2.65 ERA in 17 games started.

On July 31, 2013, the day of the MLB trade deadline, the Orioles traded Hader and L. J. Hoes to the Houston Astros in exchange for Bud Norris. He completed his 2013 season with the Quad Cities River Bandits of the Class A Midwest League.

Pitching for the Lancaster JetHawks of the Class A-Advanced California League in 2014, Hader and two relief pitchers combined to throw a no-hitter on May 13. After pitching to a 9–2 record with a league-leading 2.70 ERA and 112 strikeouts in 103 1⁄3 innings, the Astros promoted him to the Corpus Christi Hooks of the Class AA Texas League in August. He was named the California League Pitcher of the Year. Hader returned to Corpus Christi in the 2015 season. He was selected to play for the United States national baseball team in the 2015 Pan American Games.

On July 30, 2015, the Astros traded Hader, Brett Phillips, Domingo Santana, and Adrian Houser to the Milwaukee Brewers for Carlos Gómez and Mike Fiers. The Brewers assigned Hader to the Biloxi Shuckers of the Class AA Southern League. He finished the season with a 3.03 ERA combined.

The Brewers invited him to spring training in 2016. Hader began the 2016 season with Biloxi, and made his first start for the Colorado Springs Sky Sox of the Class AAA Pacific Coast League on June 12. He was selected to appear in the 2016 All-Star Futures Game. The Brewers added him to their 40-man roster after the season.

The Brewers promoted him to the major leagues on June 9. He made his major league debut on June 10. Hader began 2018 in the Milwaukee bullpen. On April 30, Hader became the first pitcher ever to record 8 strikeouts in an outing that was less than 3 innings long. He recorded a 2.2-inning save against the Cincinnati Reds where he faced 9 batters with 8 strikeouts and 1 walk.

Owning a 1.21 ERA with 83 strikeouts in 44 innings, Hader was named to the 2018 MLB All-Star Game. Hader appeared in the 2018 All-Star Game at the top of the eighth inning. During his appearance, he gave up hits to Rangers' Shin-Soo Choo and Astros' George Springer before Mariners' Jean Segura hit a home run to left field to give the American All-Stars a 5–2 lead. After giving up a single to Boston Red Sox baseman Mitch Moreland, Hader was replaced after 26 pitches, allowing four hits and one out over five batters.

On March 30, 2019, Hader pitched an immaculate inning to earn the save against the St. Louis Cardinals, striking out Tyler O'Neill, Dexter Fowler, and Yairo Munoz on 9 consecutive strikes, 7 of which were swinging strikes.

Hader has a 3-pitch repertoire: 4-seam fastball that tops out at 98mph, a slider (82 mph) and a very rarely-thrown changeup (86mph). As a left-handed sidearm pitcher with great disguises to hide the ball, he is known to throw most of his fastballs and sliders in a crossfire (from left to mid right edge of a right-handed batter's strike zone) against right-handers. When they do get hit, however, it results in him being an extreme fly-ball pitcher.

On May 8, 2021, Hader reached 400 strikeouts faster than any other pitcher in MLB history, doing so in 234+2⁄3 innings pitched, breaking the prior record of 236 innings, which had been set by Craig Kimbrel in 2014. For July, Hader was named NL Reliever of the Month, the fourth time he won the award. On September 11, Hader pitched the ninth inning to close out a combined no-hitter against the Cleveland Indians. In 2021, Hader became the first three-time winner of the Trevor Hoffman NL Reliever of the Year Award. 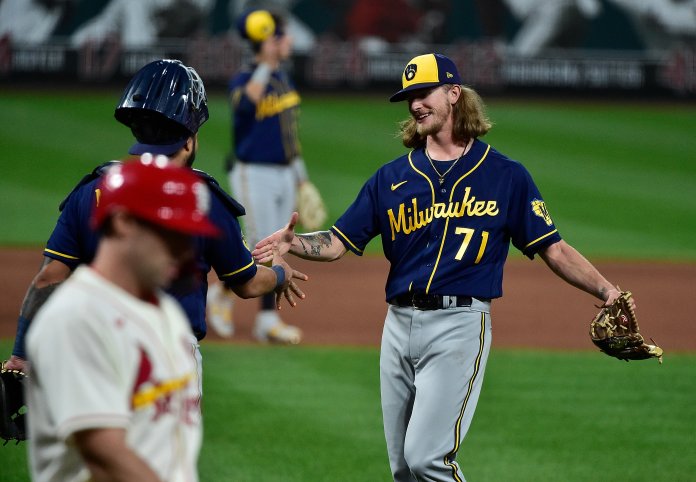 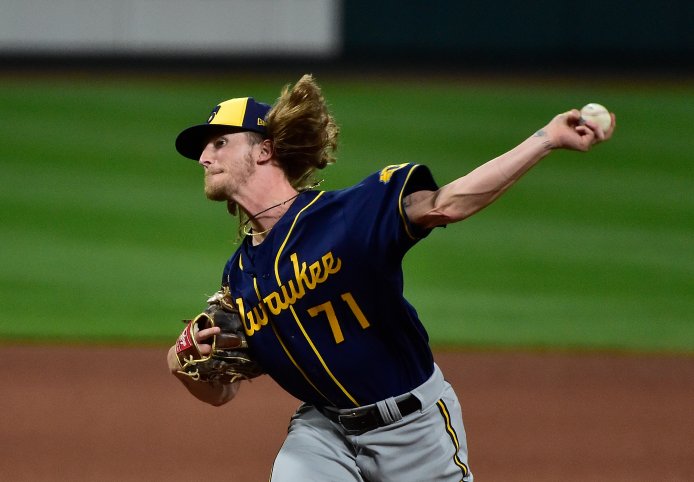 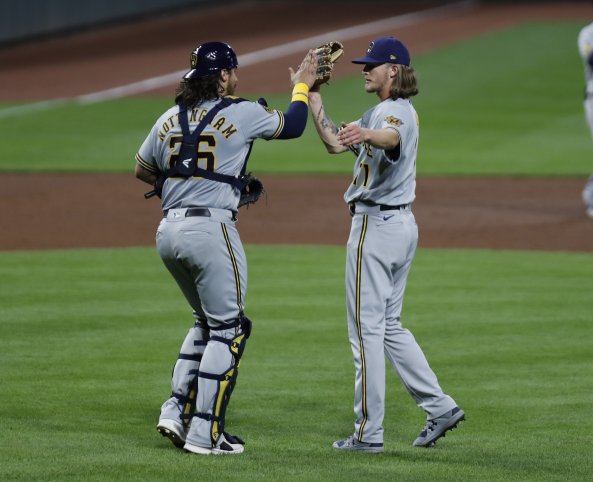 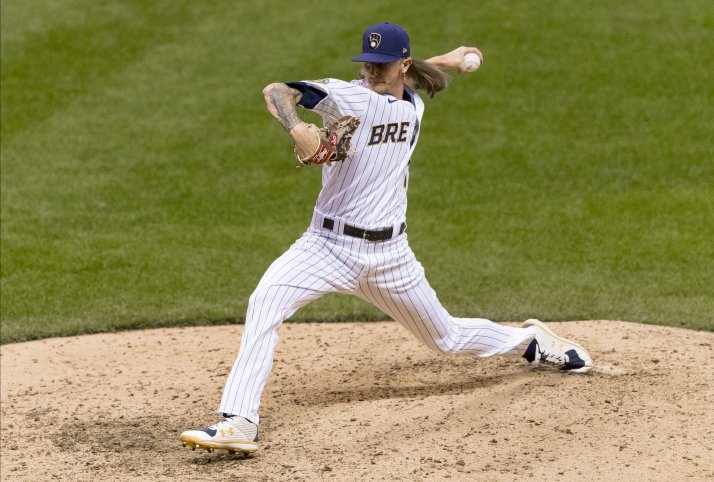 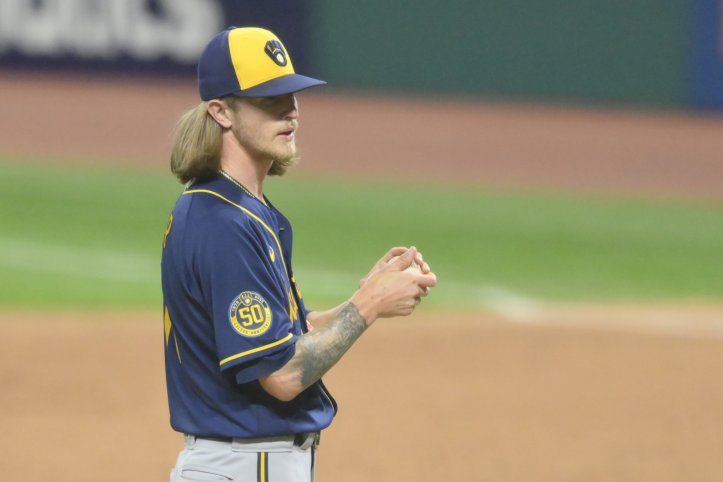