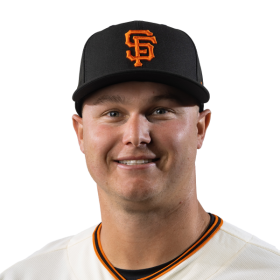 St. Jude is leading the way the world understands, treats and defeats childhood cancer and other life-threatening diseases.

The son of former MLB player Stu Pederson, Joc was drafted by the Dodgers in the 11th round of the 2010 MLB draft out of Palo Alto High School. By virtue of his Jewish heritage, he has played for the Israel national baseball team in the 2013 World Baseball Classic. He was ranked the Dodge...

The son of former MLB player Stu Pederson, Joc was drafted by the Dodgers in the 11th round of the 2010 MLB draft out of Palo Alto High Sch...

The son of former MLB player Stu Pederson, Joc was drafted by the Dodgers in the 11th round of the 2010 MLB draft out of Palo Alto High School. By virtue of his Jewish heritage, he has played for the Israel national baseball team in the 2013 World Baseball Classic. He was ranked the Dodgers' # 1 prospect by Baseball America after the 2013 season. In 2014, he was named the Pacific Coast League (PCL) Most Valuable Player, and he made his major league debut that September.

Beginning the 2015 season as the Dodgers' starting center fielder, Pederson was selected to the NL All-Star team. He made it to the final round of the 2015 Major League Baseball Home Run Derby, but lost to Cincinnati Reds third baseman Todd Frazier. He became the first Dodger to hit at least 25 home runs in each of his first two seasons, with 25 in 2016.

In Game 3 of the 2020 National League Championship Series, he was one of three Dodgers to hit a home run in the first inning, marking the first time that three players from the same team had homered in the first inning of a playoff game. On Pederson's playoff success, Dodgers starting pitcher Alex Wood quipped, "They call it 'Joctober' for a reason." Pederson had seven hits in 18 at-bats in that series. In Game 5 of the 2020 World Series, Pederson hit the fifth home run of his World Series career, a second-inning solo shot against Tyler Glasnow that would prove the winning margin of victory in Los Angeles's 4–2 triumph. Max Muncy noted that "The guy performs on the huge stage. This is just what he does." In the World Series, Pederson had four hits in 10 at-bats as the Dodgers won the championship.

On February 5, 2021, Pederson signed a one-year contract with the Chicago Cubs which included a mutual option for the 2022 season. He was motivated to sign with the Cubs because he hoped for more playing time than he had received with the Dodgers. Pederson began the season as the team's starting left fielder. He was placed on the injured list on April 22, and was struggling offensively at the time, hitting .137 with 1 HR, 4 RBIs, and 20 strikeouts. Pederson returned on May 3, and was inserted into the leadoff spot in the lineup, as regular leadoff hitter Ian Happ had left the previous game after an outfield collision, which forced him onto the injured list. Of his final 57 games with the Cubs, 42 were starts from the leadoff position, and he raised his batting average as high as .269.

On July 15, 2021, Pederson was traded to the Atlanta Braves in exchange for minor league prospect Bryce Ball. Atlanta had just lost superstar Ronald Acuña Jr. to a long-term ACL injury, and Pederson stepped into Acuña Jr.'s positions of right field and leadoff hitter.

On July 17, 2021, Pederson recorded his first hit as a Brave, a two-run home run in the fourth inning, against the Tampa Bay Rays.

In the 2021 regular season, playing for the Braves Pederson batted .249/.325/.428 with 7 home runs and 22 RBIs in 173 at bats. He played 36 games in right field, and 24 games in center field. With the Braves winning their fourth consecutive NL East division championship, Pederson extended his postseason appearance streak for the seventh straight season.

In the post-season, Pederson hit two pinch-hit home runs as Atlanta won the 2021 National League Division Series against the Brewers, despite starting only once in four games, making him the third player in history with two in a single postseason series. Then in Game 2 of the 2021 National League Championship Series, Pederson hit a two-run home run against three-time Cy Young Award winner Max Scherzer, as the Braves came from behind to beat the Dodgers 5–4. His home run traveled 454 feet (up until that time, the longest home run of the 2021 post-season), and had an exit velocity of 112.2 mph (the third-hardest-hit home run Scherzer had surrendered since Statcast began tracking data in 2015). With 12 playoff home runs, Pederson tied Hall of Famer Yogi Berra for 24th on the all-time list. The Braves went on to win the 2021 World Series, making Pederson the ninth player in major league history to win back-to-back World Series with different teams.

On March 16, 2022, Pederson signed a one-year, $6 million contract with the San Francisco Giants, returning to the National League West, as well as the Bay Area, where he grew up.

On May 24, Pederson hit three home runs and eight RBIs as he led the Giants to a 13–12 win over the New York Mets. Pederson became the second Giant to hit three home runs in a game at Oracle Park, joining Pablo Sandoval. His eight RBIs matched the San Francisco-era Giants record also held by Willie Mays, Orlando Cepeda, and Brandon Crawford. He became the first Giants player to hit three multi-run home runs in a game since Willie Mays in 1961. He also became only the second major league player in the last century, joining Joe DiMaggio, to hit three home runs, have 8 RBIs, and have game-tying RBIs in both the eighth and ninth innings in one game. Pederson became the second player to hit a home run into McCovey Cove as both a Giants player and a visiting player, joining Ryan Klesko.

On July 8, 2022, Pederson was announced to represent and start in the outfield for the National League in his return to Dodger Stadium for the 2022 Major League Baseball All-Star Game, his second career All-Star selection and start. 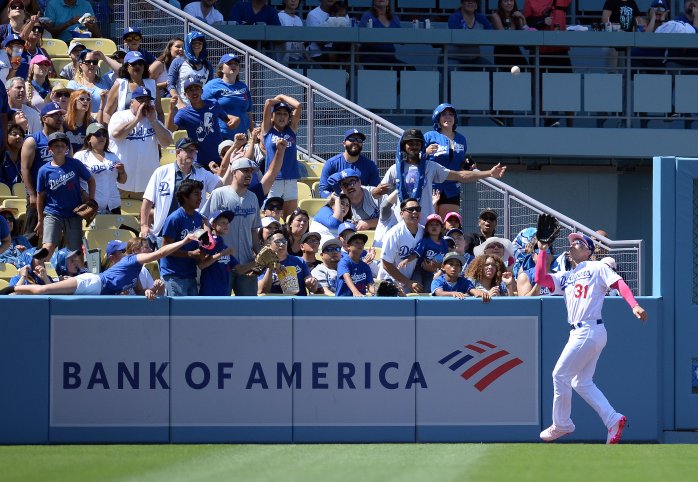 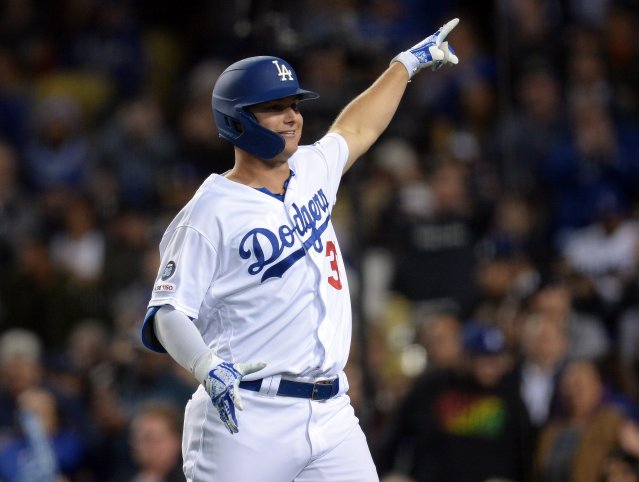 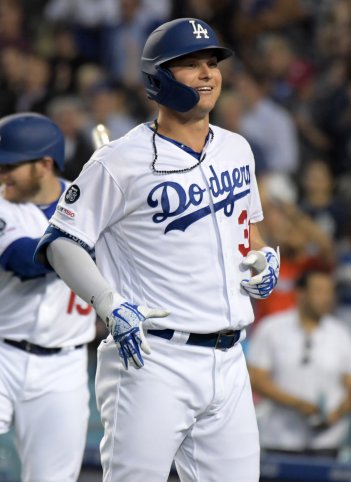 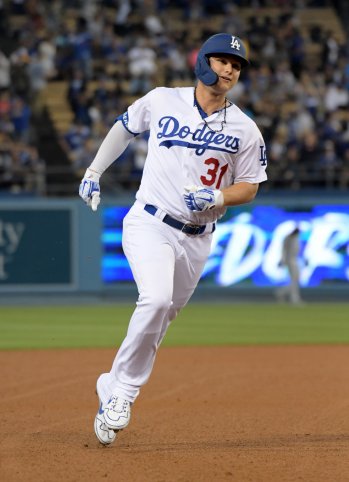 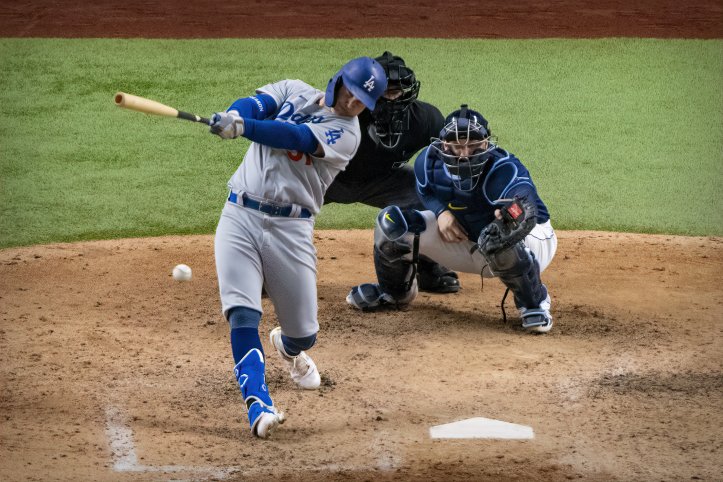 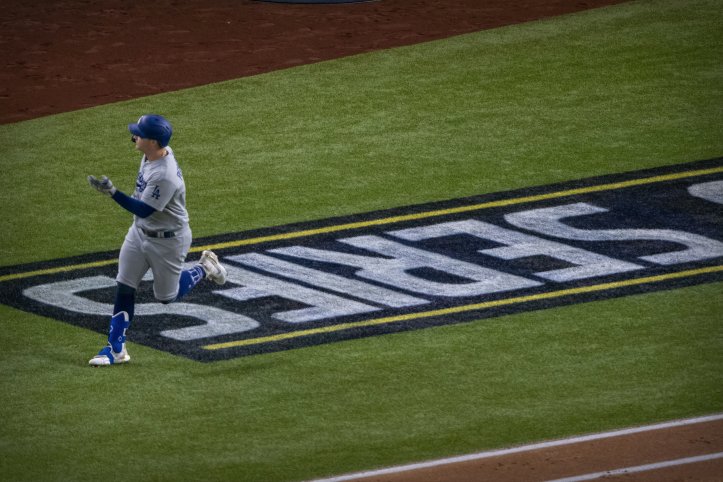 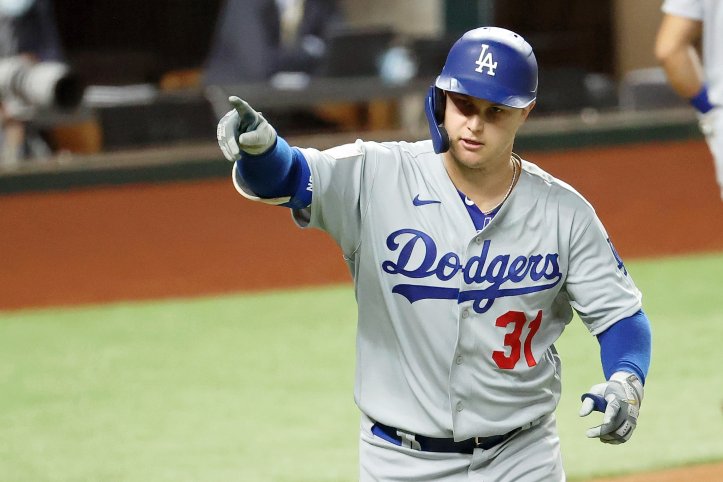 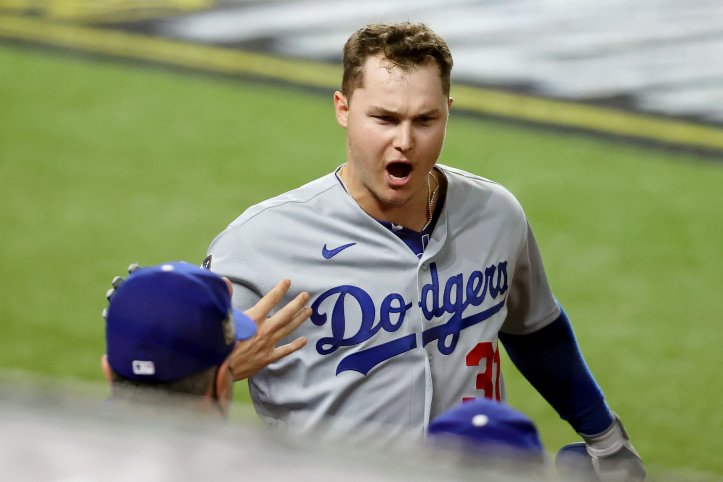 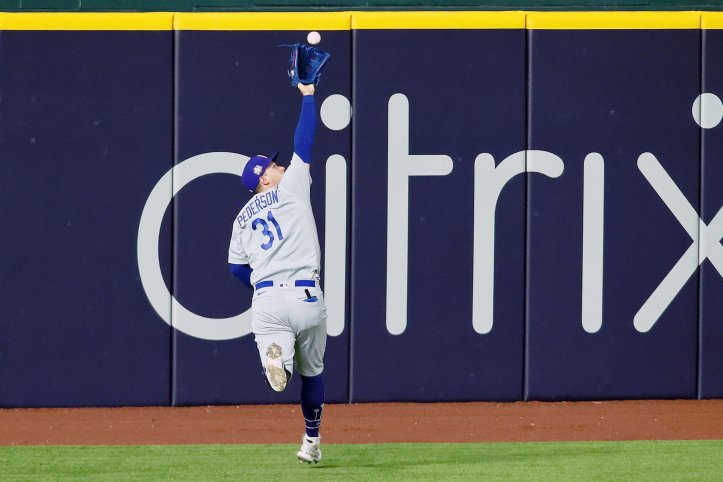 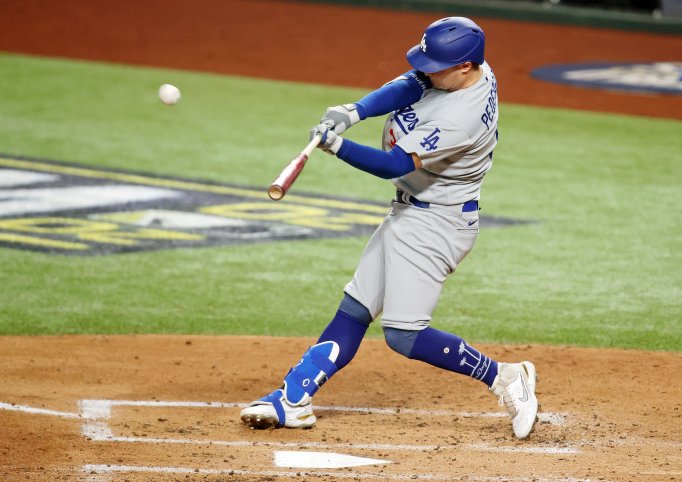 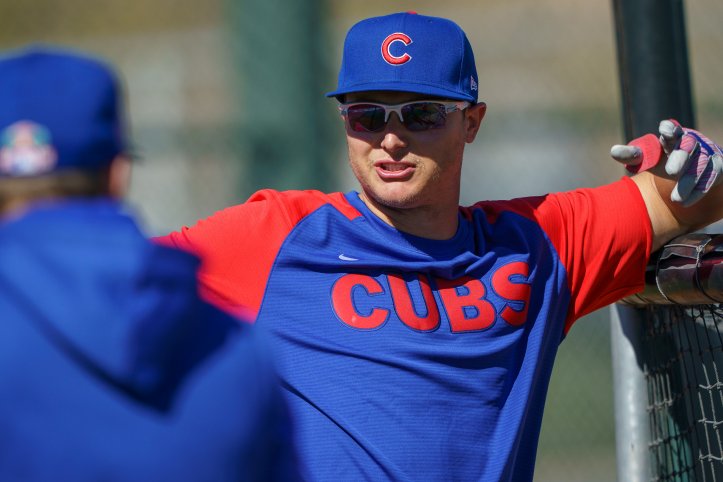 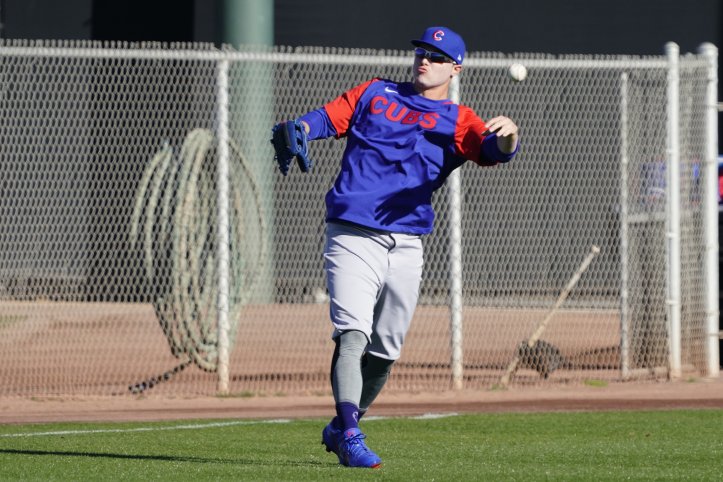 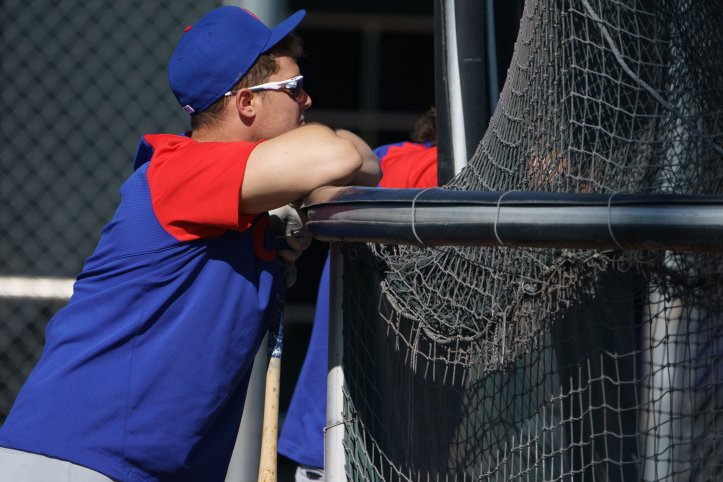 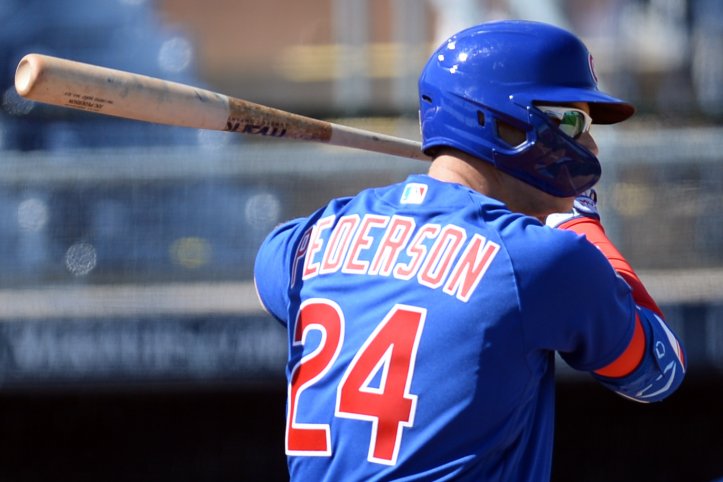 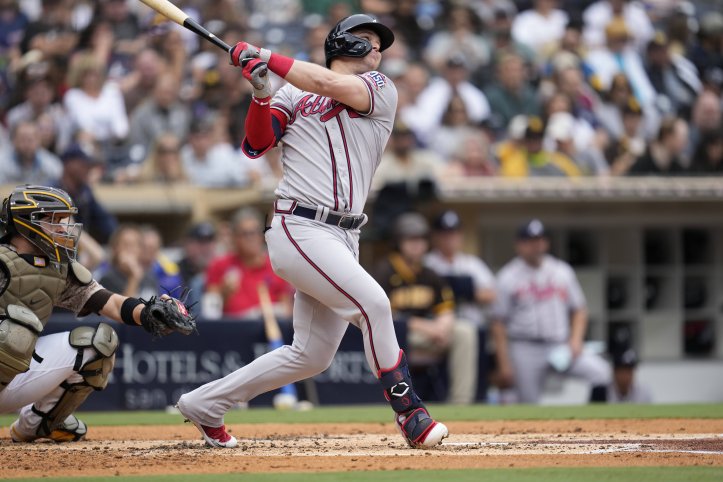 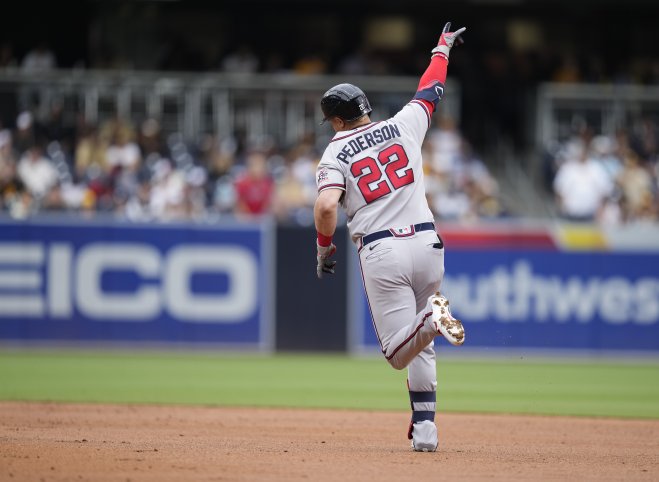 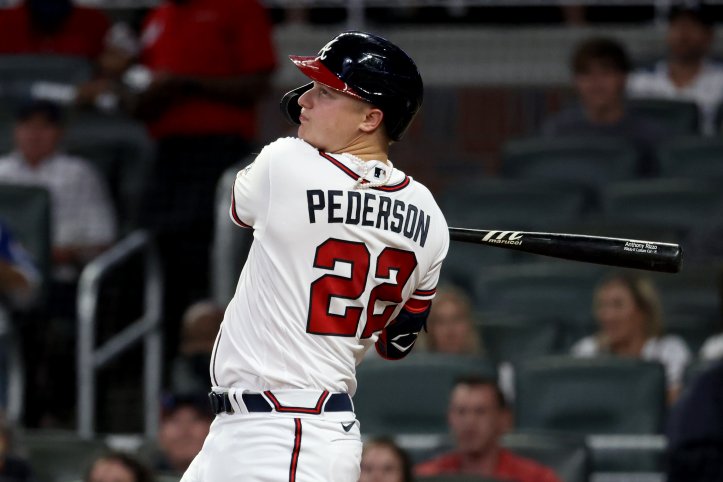 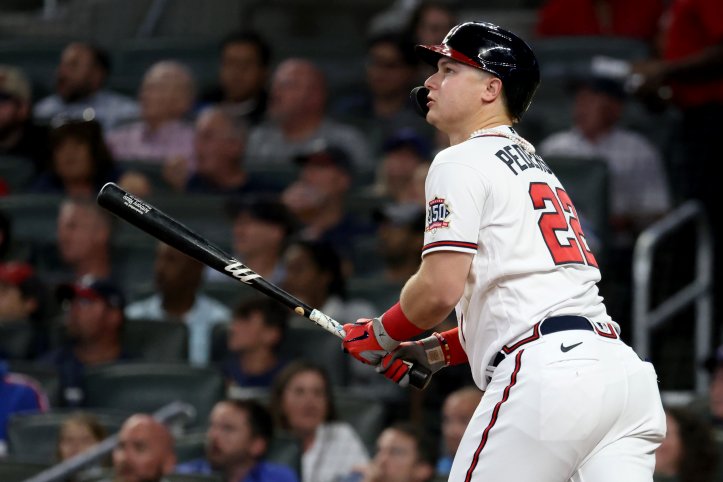 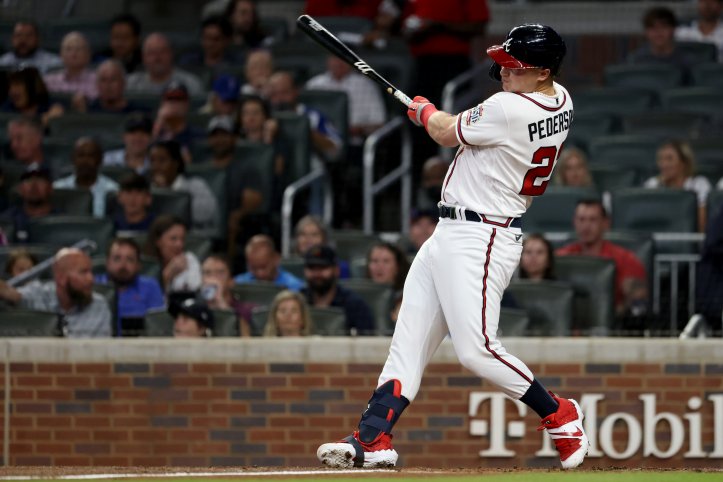 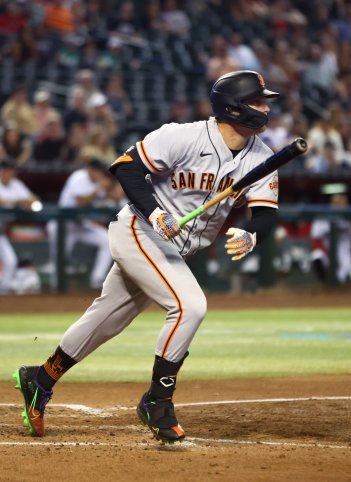 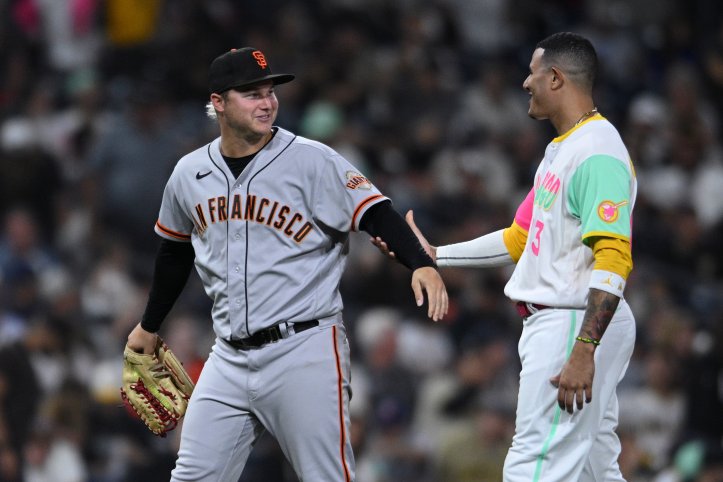 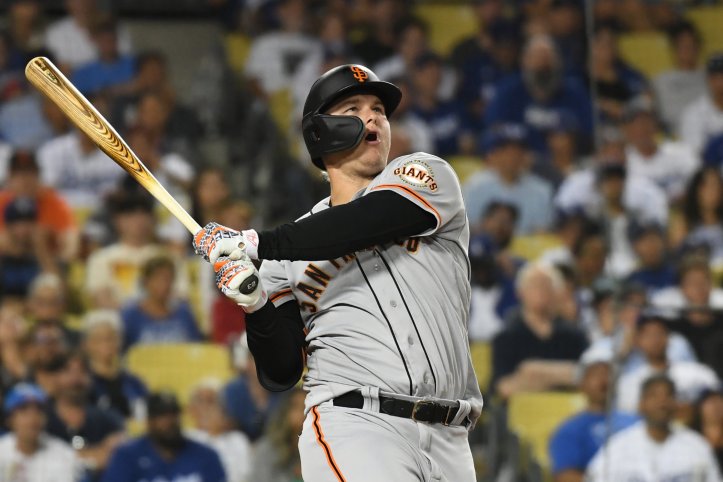 Getting ready for the final weekend of the regular season and I am craving the JLIN from @squarepieguys. As you get ready to watch Giants baseball this weekend, make sure to order from Square Pie Guys exclusively through @DoorDash. https://t.co/4kKBNuryNv