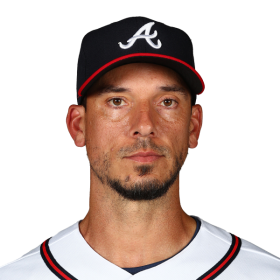 Morton selects two games each month in partnership with the Wounded Warrior Project. 30 Field Box tickets are provided to the Wounded Warrior Project along with $60 spending money courtesy of Morton for each member to enjoy. Prior to each selected game, Morton hosts a meet and greet and spends time with every veteran, individually, answering questions and signing autographs.

get involved
Involved in 7 charities
Teammates for Kids

Food is more than just a meal on a plate. When we share food around a table, we can begin to break the cycle of hunger and reimagine new possibilities. Consistent access to nutritious food enables students to excel, parents to focus on their livelihoods, and seniors to maintain a healthy life.

Together, we create life-changing wishes for children with critical illnesses – but you can make a child's wish possible.

Buddy Baseball is a non-competitive recreational league for boys and girls with special needs serving the Tampa Bay community. Each player is paired with a buddy to assist the player as needed on the field and in the dugout. The league fosters friendships and breaks down barriers. Not only do the players experience the thrill of participating in a sport, they also get to experience team play and camaraderie. Buddy Baseball is an opportunity like no other for children with special needs. Both girls and boys are encouraged to play and be buddies.

get involved
The Miracle League.

The Miracle League removes the barriers that keep children with mental and physical disabilities off the baseball field and lets them experience the joy of America’s favorite pastime. Since the main barriers for these adults arise from the natural grass fields used in conventional leagues, Miracle League teams play on a custom-designed, rubberized turf field that accommodates wheelchairs and other assertive devices while helping to prevent injuries.

His grandfather played in the Philadelphia Athletics farm system. He was raised in Trumbull, Connecticut, where he played in little league with future major leaguers pitcher Craig Breslow and infielder Jamie D'Antona. Morton grew up attending ballgames at Yankee Stadium and idoliz...

His grandfather played in the Philadelphia Athletics farm system. He was raised in Trumbull, Connecticut, where he played in little...

His grandfather played in the Philadelphia Athletics farm system. He was raised in Trumbull, Connecticut, where he played in little league with future major leaguers pitcher Craig Breslow and infielder Jamie D'Antona. Morton grew up attending ballgames at Yankee Stadium and idolizing Derek Jeter and Roger Clemens. Morton attended Joel Barlow High School in Redding, Connecticut, where he starred as a pitcher, graduating in 2002.

The Braves added Morton to their 40-man roster on November 20, 2007. Morton made his major league debut on June 14, 2008, against the Los Angeles Angels of Anaheim, allowing three runs in six innings, earning his first major league win.

On June 3, 2009, the Braves traded Morton with Gorkys Hernández and Jeff Locke to the Pittsburgh Pirates in exchange for Nate McLouth. He made his first start with the Pirates on June 10, pitching an inning against the Atlanta Braves, while Jeff Karstens got the win. On June 28, he received his first decision, a loss to the Kansas City Royals. On July 3, 2009, he won his first game, pitching 6 innings of 1 hit ball against the Florida Marlins. On September 30, 2009, he pitched a complete game 4 hitter with 8 strikeouts against the Chicago Cubs. His 2009 record in 18 starts was 5 wins and 9 losses, a 4.55 ERA, 97 innings pitched and 62 strikeouts, 40 walks, 7 home runs, 5 hit batsmen, .276 average against, and a 1.46 WHIP.

Morton broke 2010 spring training as a member of the Pirates' starting rotation. Morton struggled, losing all five starts in April and finishing the month with a 12.57 earned run average (ERA). However, Morton delivered a promising performance on April 30, 2010 against the Los Angeles Dodgers, striking out 8 in six innings of work while allowing six runs (only three earned) but was dealt a loss as the Pirates only provided him with two runs of support. He earned his first win of the season on May 5 against the Chicago Cubs, striking out three in a 4–2 decision. However, he lost each of his next four starts, dropping his record on the season to 1–9 with a 9.35 ERA. A day after suffering his 9th loss against the Cincinnati Reds, the Pirates placed him on the 15-day disabled list with shoulder fatigue. After recovering, he was assigned to the Pirates Triple-A affiliate Indianapolis Indians.

Speaking before his first start with the Indians, Morton said "I was pressing. I wasn't being myself on the mound those last couple times I went out there in Pittsburgh. There was so much going on in my mind. At the end of last year, I finished strong, I got a glimpse of what I could do, truly, in the big leagues, going out there and going deep into games, being competitive, being someone who was pretty good. I wanted to be out there for myself and because I care about this team and organization. At the same time, though, after that last one, that last start, because I care about these guys is why, exactly, I knew I couldn't go back out there again."

Morton was recalled when starter Ross Ohlendorf was placed on the 15-day disabled list due to a shoulder injury. On his final start of the 2010 season, Morton compiled his finest pitching performance of the year, striking out a career-high nine batters in a 2–0 loss to the Florida Marlins on October 2. He finished the season with a 2–12 record and a 7.57 ERA, but in his final six starts of the season after being recalled in late August, he sported a 4.26 ERA.

2011 was Morton's best season yet, where he held a 10–10 record in 29 starts with a 3.83 ERA, earning the club's Breakout Player of the Year. On April 15, Morton threw a complete game against the Cincinnati Reds. On May 18, again at Great American Ball Park, Morton threw a complete game-shutout, striking out 5 and giving up 5 hits. Following the season, Morton underwent successful hip surgery to repair a torn labrum in October 2011, with a full recovery expected in 4–6 months. He was optimistic about returning before Opening Day. However, he began the 2012 season on the disabled list, making his season debut on April 14. His season ended when he underwent Tommy John surgery on June 14, 2012.

During 2015 Spring Training, Morton struggled thoroughly and began to experience inflammation in his recently surgically repaired hip. On April 5, 2015, the Pirates placed Morton on the 15-day disabled list.

On December 12, 2015, the Pirates traded Morton to the Philadelphia Phillies in exchange for David Whitehead. His season came to an abrupt end on April 23, 2016, when Morton suffered a hamstring injury running to first base in a game against the Milwaukee Brewers, and was placed on the disabled list the next day. On April 27, the Phillies announced Morton would miss the rest of the 2016 season with a torn hamstring.

On November 16, 2016, Morton signed a two-year, $14 million contract with the Houston Astros. During the 2017 regular season, Morton made 25 starts, compiling a 14–7 record with a 3.62 ERA. He pitched 146 2⁄3 innings and recorded 163 strikeouts. On October 16, 2017, Morton started Game 3 of the American League Championship Series at Yankee Stadium. He lost the game, giving up 7 runs in 3 2⁄3 innings. On October 21, he won Game 7 of the ALCS at Minute Maid Park, pitching five shutout innings with five strikeouts, sending the Astros to the World Series. Morton started Game 4 of the World Series and pitched well over 6.1 innings, giving one earned run on 3 hits and 7 strikeouts in an eventual Astros loss. Morton's career reached a new apex when he pitched the final four innings in Game 7 of the World Series. He was credited as the winning pitcher, helping the Astros win their first World Series title.

In 2018, Morton continued his successful stint with the Astros. On May 12, he set a personal record of 14 strikeouts over seven innings in a 6–1 victory against the Texas Rangers. Entering the All-Star break third in the American League with 11 wins, 11.7 strikeouts per nine innings, and ninth in ERA (2.96), Morton was added to the AL roster for the 2018 MLB All-Star game. Morton avoided serious injury in 2018, with only a short trip to the 10-day DL for shoulder discomfort. He pitched 167 innings, second only to his 2011 high of 171.2. Morton finished the regular season with a 3.13 ERA, a 15-3 win-loss record, and 201 strikeouts, all constituting career highs.

On December 21, 2018, the Tampa Bay Rays signed Morton to a two-year, $30 million contract. He made his debut as a Ray against the Astros on March 29, 2019, pitching five innings and earning the win as the Rays defeated the Astros 4–2. On June 30 he was voted to his second All-Star team. 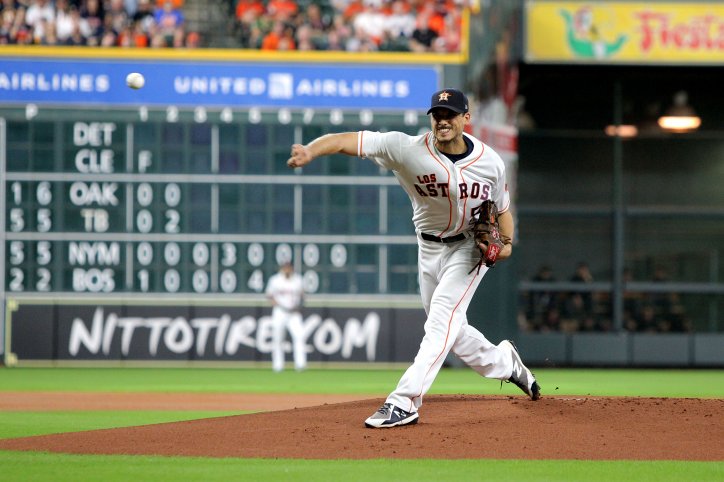 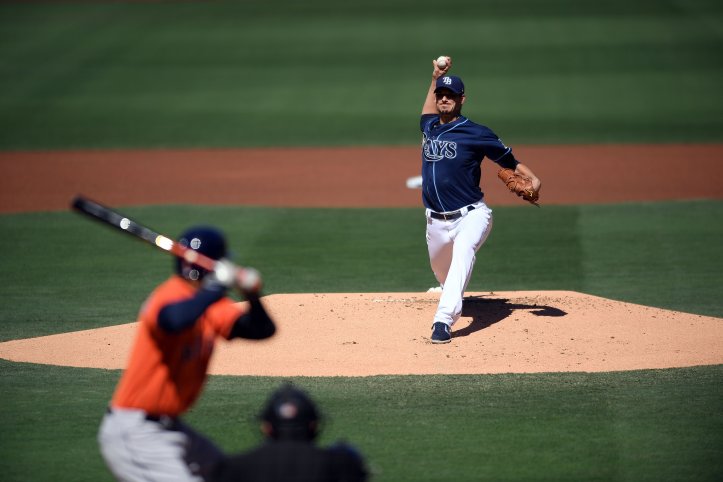 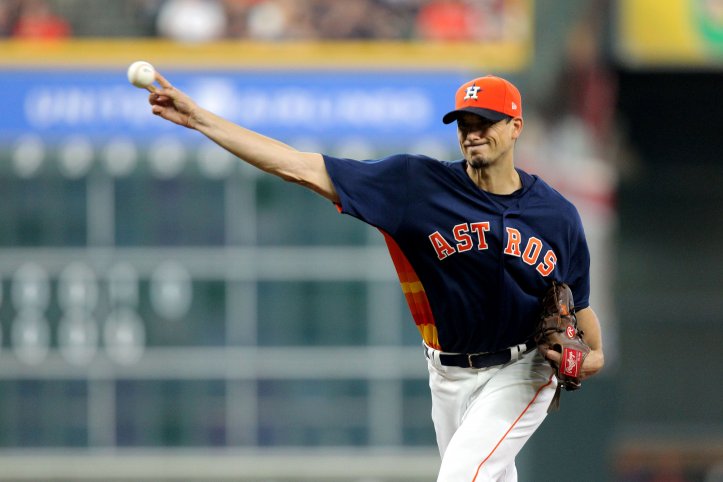 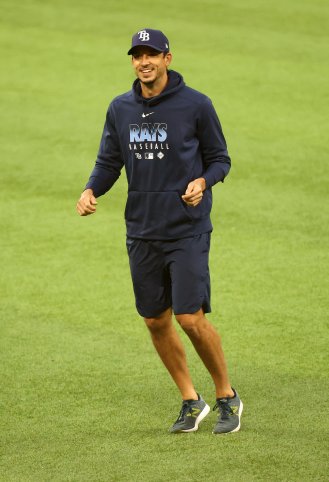 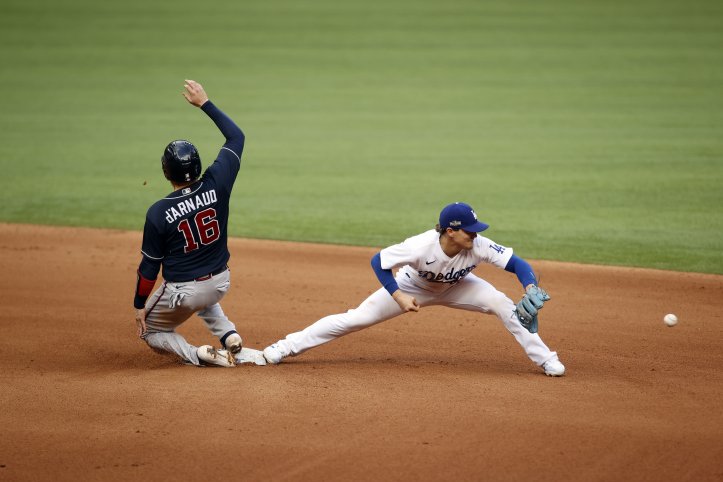 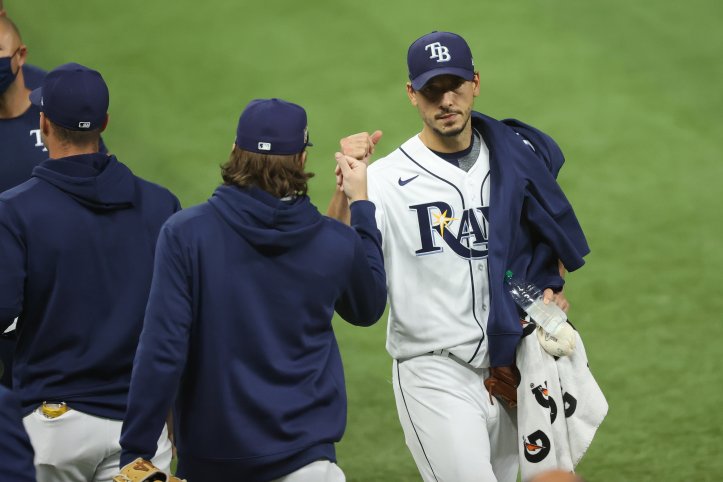 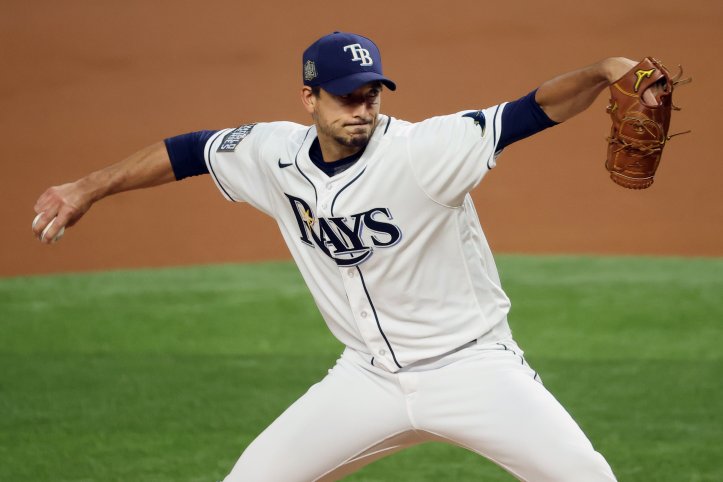 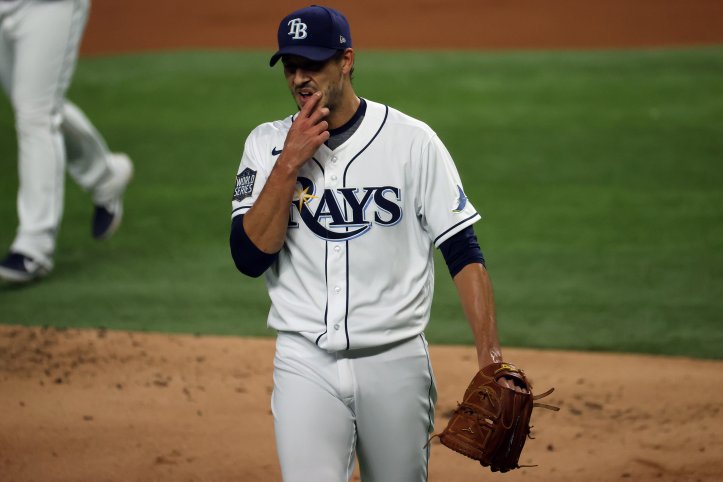 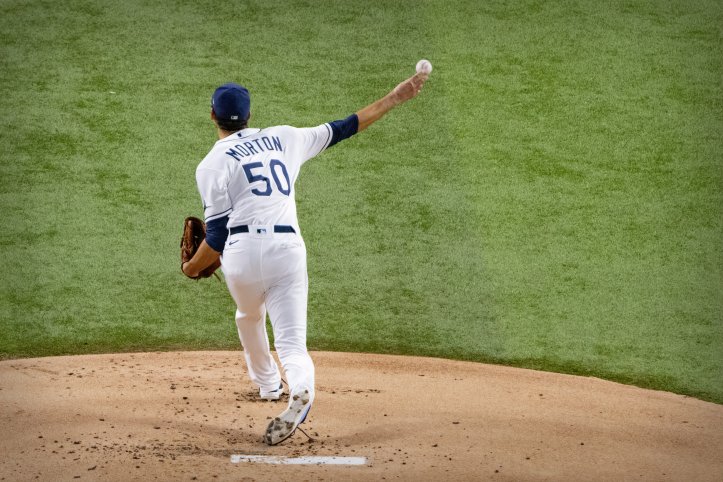 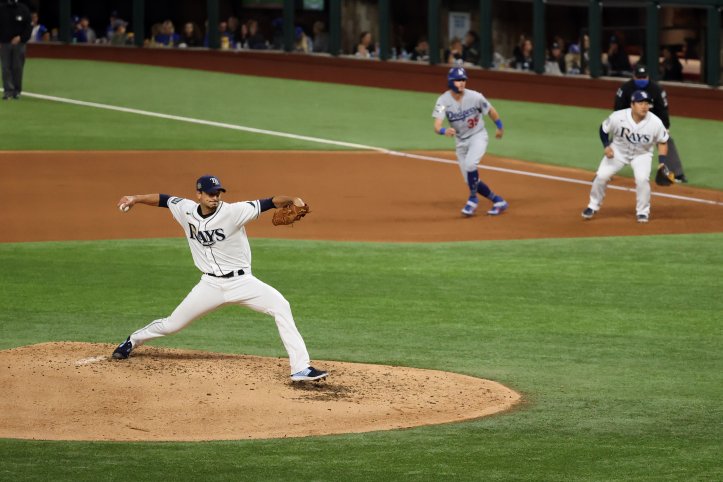 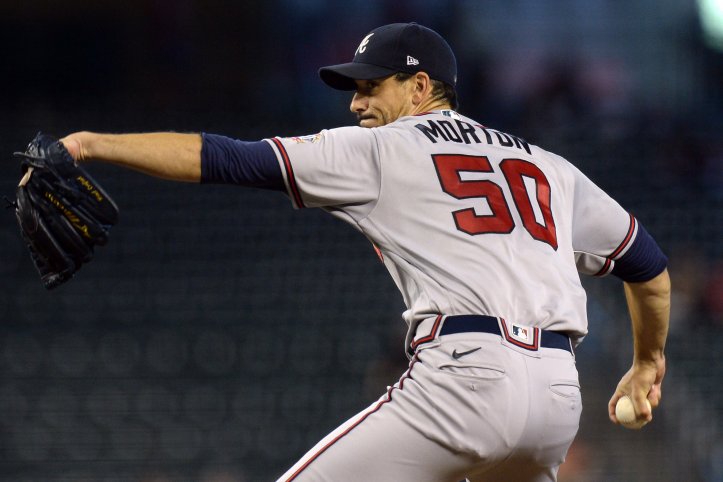 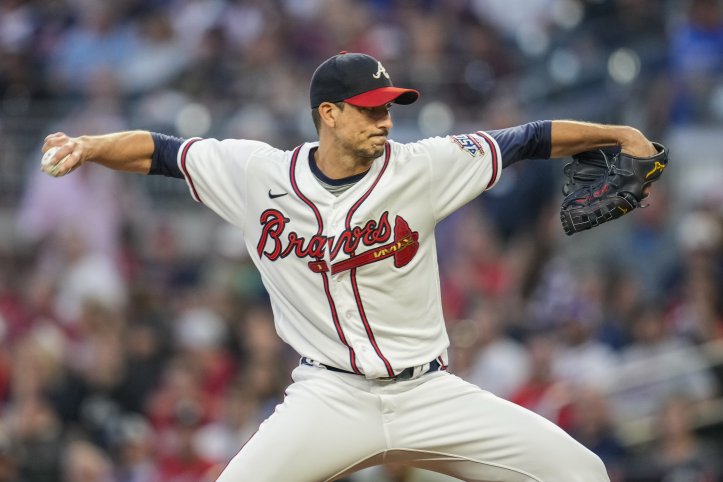 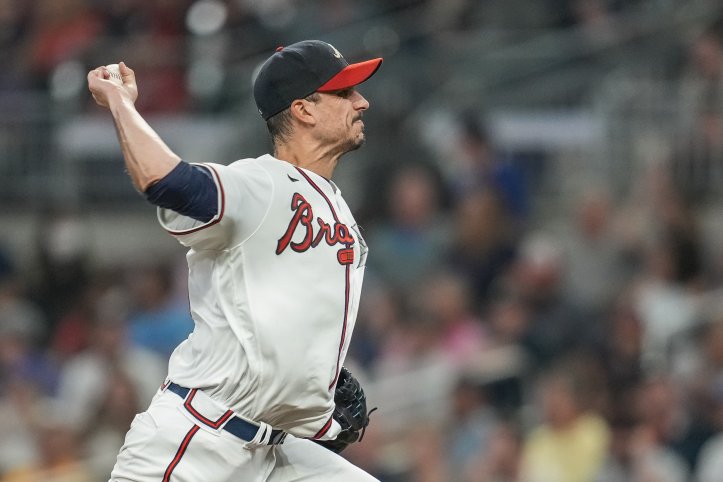 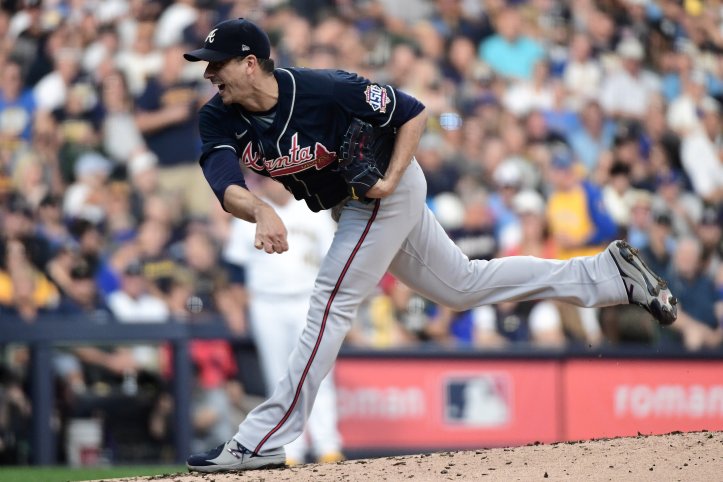