Chapman joined the Holguín Sabuesos of...

A friend of Chapman invited him to join a local baseball team at the age of 15. He began playing as a first baseman un...

Chapman joined the Holguín Sabuesos of the Cuban National Series League in 2006. In 327 2⁄3 career innings, Chapman compiled a 24–19 win–loss record, a 3.74 earned run average (ERA), and 365 strikeouts. He was used mainly as a starting pitcher, although he made 11 relief appearances in the 2007 season. Chapman was part of the Cuban national team at the 2007 Pan American Games and the 2009 World Baseball Classic.

After a failed attempt to defect in the spring of 2008, Chapman reported to Havana to meet with Cuban president Raúl Castro who gave him a conditional reprieve, suspending him for the remainder of the National Series season and also keeping him off Cuba's national team for the 2008 Summer Olympics but allowing him to return to the National Series and play in the WBC in 2009.

Chapman successfully defected from Cuba while in Rotterdam, Netherlands where the Cuban national team was participating in the World Port Tournament on July 1, 2009; Chapman walked out the front door of the team hotel and entered into an automobile driven by an acquaintance. Gerardo Concepción defected from the Cuban national team in the same tournament. Chapman eventually established residency in Andorra and petitioned the MLB to be granted free agent status.

On January 10, 2010, Chapman agreed to a long-term contract with the Cincinnati Reds. The Reds announced that they had signed Chapman to a six-year contract, worth $30.25 million according to MLB sources. The Associated Press reported that the bonus totals $100.25 million, paid annually over 11 years, with an additional bonus if he became eligible for salary arbitration in 2012 or 2013.

Chapman began the 2010 season assigned to the Triple-A Louisville Bats, and made his professional debut with the Louisville Bats on Sunday, April 11, in Toledo against the Mud Hens, where he pitched 4 2⁄3 innings, giving up 1 unearned run, while striking out 9. Chapman made 13 starts with Louisville, pitching to a 4.11 ERA, and pitched to a 2.40 ERA after the team used him as a relief pitcher.

Chapman made his Major League debut August 31, 2010, in the eighth inning against the Milwaukee Brewers; his first pitch was clocked at 98 mph (158 km/h) as a called strike (which was promptly tossed to the dugout by catcher Ryan Hanigan, to be saved). In nine pitches he retired the side. He recorded his first Major League win on September 1 after pitching an inning of relief against the Brewers. Chapman threw the fastest pitch recognized by MLB on September 24, 2010 at Petco Park in San Diego, California. It was clocked at 105.1 mph to Tony Gwynn Jr. in the eighth inning.

In Game 2 of the 2010 NLDS against the Philadelphia Phillies, Chapman allowed 3 runs (all unearned) due to miscues of the outfielders. Chapman would get his first career postseason loss and the Reds would lose the division series to the Phillies in a three-game sweep.

Chapman served solely as a relief pitcher in 2011, appearing in 54 regular season games and finishing the season with a 3.60 ERA. He also struck out 71 batters in just 50.0 innings of work that season.

Chapman was due to be introduced as a starter for the 2012 season, but preseason injuries to closer Ryan Madson and middle relievers Bill Bray and Nick Masset led manager Dusty Baker to put Chapman in the setup role. Interim closer Sean Marshall struggled early in the season, and Chapman was given the closer role in late May.

On July 1, 2012, Chapman was named to his first All-Star Game. Chapman won the MLB Delivery Man of the Month Award for July 2012, in which he recorded 13 saves while not allowing a run in 14 1⁄3 innings while striking out 31 batters—more than 60% of the batters he faced. It was the third month of the season in which he did not allow a single run. He was named the August Delivery Man of the Month as well. Chapman finished the 2012 season with a 1.51 ERA and 38 saves in 43 chances, recording 122 strikeouts and 23 walks in 71 2⁄3 innings.

During a spring training game against the Kansas City Royals on March 19, 2014, Chapman was struck in the head by a line drive from Salvador Pérez. The spring-training game between the Reds and the Royals was ended at that point with Kansas City leading 8-3. Chapman underwent surgery to fix a skull fracture above his left eye. A metal plate was inserted into his head to stabilize the fracture.

Chapman began the 2014 season on the 15-day disabled list. On April 18, Chapman was cleared to begin throwing batting practice sessions. Reds manager Bryan Price said that he wasn't sure when Chapman would throw but said it likely would be during the team's 10-game trip that ended April 27. He was activated from the disabled list on May 10. Chapman recorded his 100th save against the Arizona Diamondbacks on July 29, 2014, becoming the eighth-fastest pitcher to reach the milestone. In the 20-pitch appearance, Chapman threw 15 fastballs, all of which were above 100 mph. In 54 appearances, Chapman produced 106 strikeouts with 36 saves going 0–3 with an ERA of exactly 2.00.

On December 28, 2015, Chapman was traded to the New York Yankees. Cincinnati received four minor league players including right-handed pitchers Caleb Cotham and Rookie Davis, and infielders Eric Jagielo and Tony Renda in the exchange. On January 11, 2016, manager Joe Girardi named Chapman the team's new closer. He avoided arbitration on February 12, 2016, by agreeing to a one-year contract worth $11.325 million. Chapman was suspended for the first 30 games of the season due to an off-season personal conduct policy violation related to domestic violence. He made his first appearance for the Yankees on May 9, 2016 striking out 2 and allowing a run as the Yankees won 6–3 over the Kansas City Royals. On July 18 against the Orioles, Chapman threw for 105 mph twice in the top of the ninth inning, averaging 103.2 mph with his fastball.

On July 25, 2016, the Yankees traded Chapman to the Chicago Cubs for Gleyber Torres, Billy McKinney, Adam Warren, and Rashad Crawford. In an interview with ESPN, Chapman stated he was thrilled that the Cubs went after him, especially considering the recent success of Héctor Rondón. Chapman made his first appearance as a member of the Cubs on July 27, pitching a 1–2–3 ninth and striking out two batters in a non-save situation. His fastest pitch in 2016 was 105.1 miles an hour, best in MLB. His four-seam fastball had the highest average speed of any MLB pitcher's pitches in 2016, at 100.9 mph, and his two-seam fastball had the third-highest average speed, at 100.4 mph.

Chapman made four appearances during the 2016 National League Championship Series (NLCS) against the Los Angeles Dodgers. Chapman blew a save opportunity during the first game of the NLCS. However, the Cubs rallied back and Chapman remained in the game to earn the winning decision. He pitched during the final two innings in Game 6 to secure the Cubs first pennant since 1945.

Chapman's workload in the 2016 World Series escalated with the Cubs facing elimination at the hands of the Cleveland Indians. Down 3–1 in the series, Chapman pitched through the seventh, eighth, and ninth innings of Game 5, allowing only one hit and preserving the Cubs' 3–2 lead. He was called upon again in the ninth inning of Game 6, where he allowed one hit and one run en route to a 9–3 victory. Chapman appeared the subsequent day to close out Game 7 with a 6–3 lead in the bottom of the eighth inning. However, he blew the save opportunity and allowed Cleveland to tie the game, though Chapman prevented Cleveland from scoring additional runs in the ninth inning. The Cubs tallied the game-winning run in the 10th inning, making Chapman the game's winning pitcher and giving him his first World Series title of his career.

On December 15, 2016, Chapman signed a five-year, $86 million contract to return to the Yankees. This was the largest contract given to a relief pitcher as of 2017.

On May 14, 2017, Chapman was placed on the 10-day disabled list due to rotator cuff inflammation in his left shoulder. Although MRIs revealed no structure damage, Chapman was ruled out for at least two weeks. On June 18, the Yankees activated Chapman from the DL and he pitched that afternoon against the Oakland A's.

On August 13, Chapman gave up a home run to Rafael Devers of the Boston Red Sox. The pitch was clocked at 103 mph, making it the fastest pitch hit for a home run in the Statcast era (breaking Kurt Suzuki's home run off of a Chapman 102 mph pitch the previous year). It was also Chapman's first home run given up to a left handed batter since Luke Scott of the Baltimore Orioles did so in 2011. Later that month, Chapman would give up only his third home run off a left hander when Yonder Alonso of the Seattle Mariners hit one of his 101 mph fastballs out. His fastest pitch of 2017 was 104.3 miles an hour, best in MLB. His four-seam fastball had the highest average speed of any MLB pitcher's pitches in 2017, at 99.7 mph.

In 2018, Chapman was elected as an MLB All-Star, representing the American League. On July 13, 2018, Chapman announced that he would skip the All Star Game to rest his knee due to tendinitis. On August 22, Chapman was placed on the 10-day disabled list due to left knee tendinitis. His fastest pitch of 2018 was 104.4 miles an hour, second-best in MLB only to pitches by Jordan Hicks. His sinker had the highest average speed of any MLB pitcher's pitches in 2018, at 100.9 mph.

On August 26, 2021, Chapman recorded his 300th career save, closing out a 7–6 victory against the Oakland Athletics. On September 30, Chapman recorded his 1,000th strikeout during a game against the Toronto Blue Jays. He struck out George Springer in the bottom of the ninth inning, eventually winning the game 6–2. Chapman finished the 2021 season with 30 saves and a 3.36 ERA. He recorded 97 strikeouts and 38 walks in 56+1⁄3 innings. 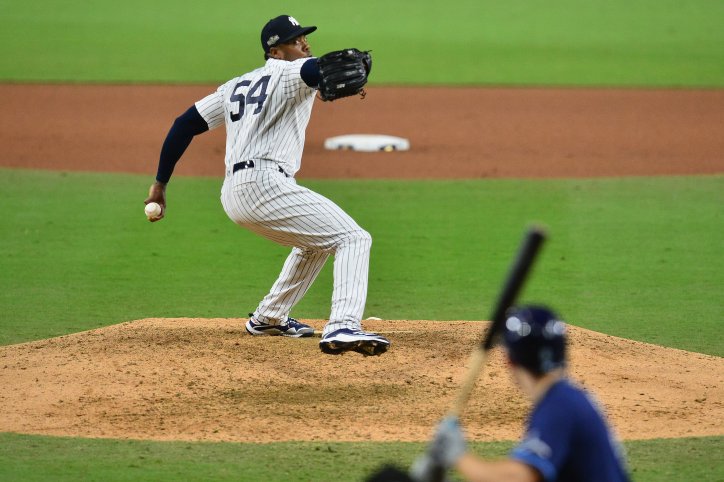 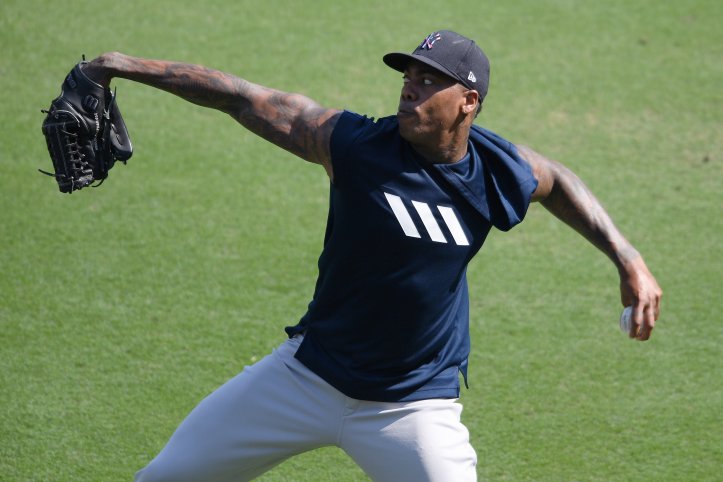 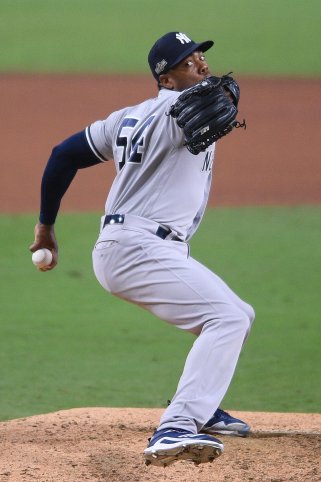 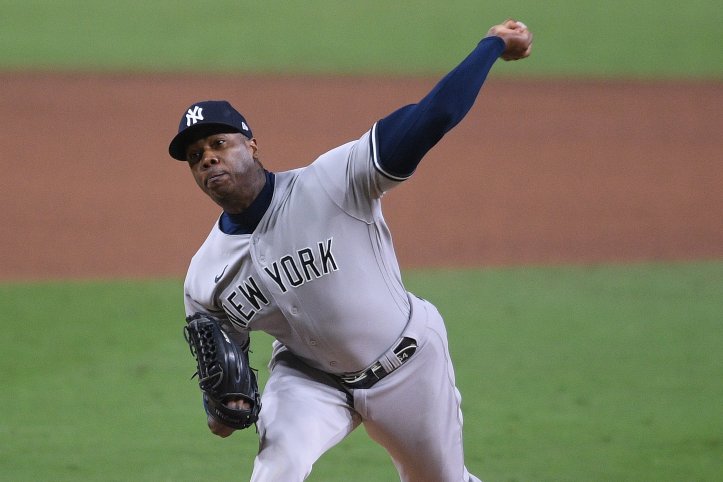 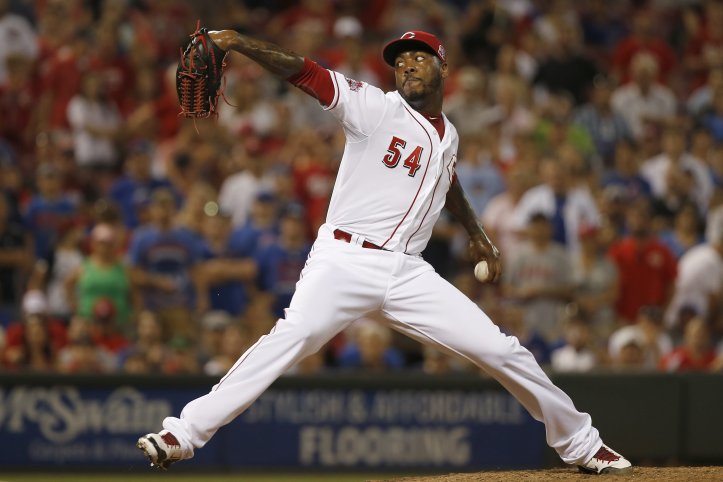 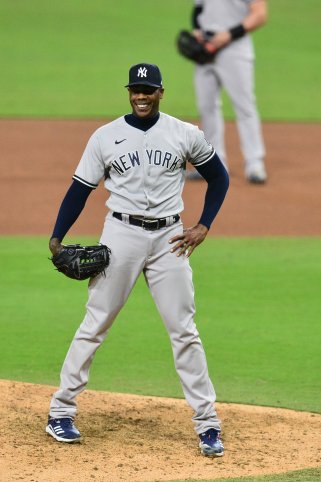 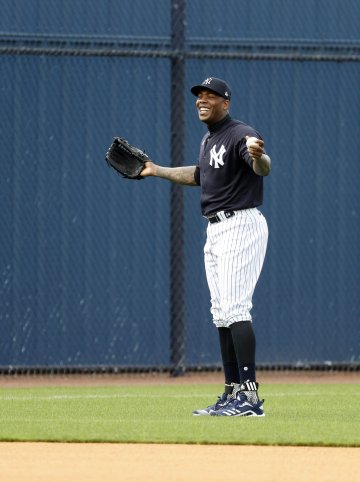