By Dylan Butler | Posted 8 days ago 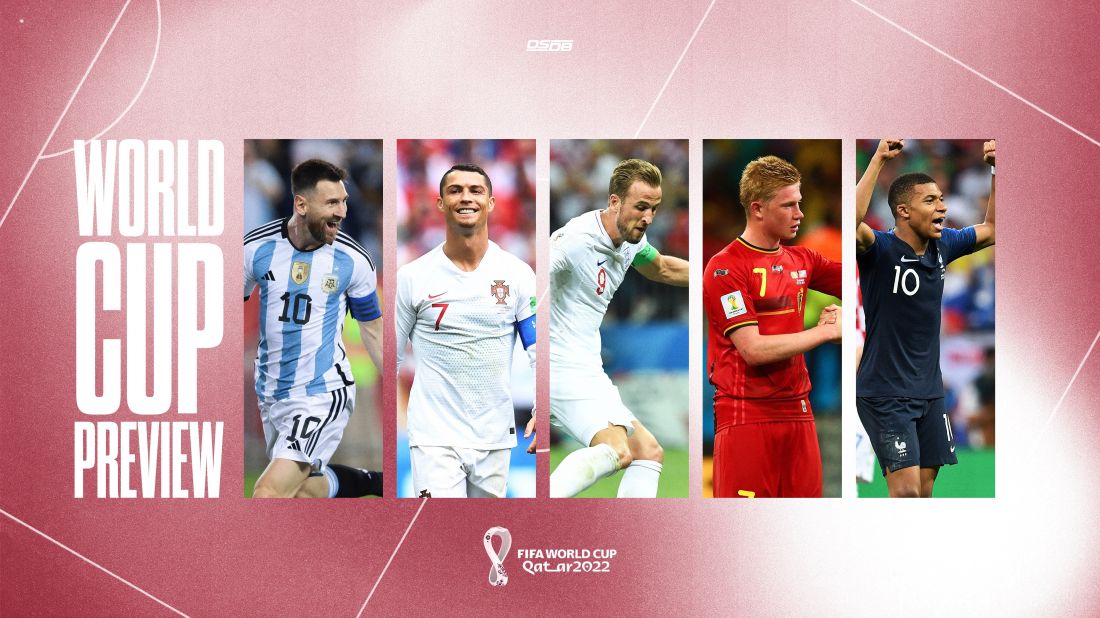 The FIFA World Cup is here, with host Qatar losing to Ecuador in the opener Sunday. For the next month, the sport’s biggest spectacle takes place with 32 teams vying to become World Cup champion on Dec. 18 in Lusail.

Who are the teams to beat? Who are the players to watch? The top games?

The World Cup being played in the winter rather than the summer? That’s unique. Brazil as the tournament favorite? Predictable.

No team has more World Cup titles than Brazil (five), the last championship won in 2002. Four years ago, Brazil fell to Belgium in the quarterfinals in Russia and it could be argued they’re even better now.

Led by global superstar Neymar, who has 75 goals in 121 appearances for Brazil, the team is loaded in attack with Richarlison and Gabriel Jesus joining the Paris Saint-Germain forward,

Brazil have lost just once in their last 29 games — a 1-0 defeat to Argentina at the Copa America final at the Maracana in Rio last summer.

Argentina have won two World Cup titles, the last coming in 1986 when Diego Maradona terrorized the opposition in Mexico. They’ve reached the final twice since, losing in 1990 and most recently in Brazil in 2014 to Germany.

Like Brazil, Argentina enter the World Cup on a tremendous run of form, unbeaten in their last 35 matches. That includes navigating the treacherous South American World Cup qualifying campaign, Copa America and beating Italy 3-0 in the Finalissima, which pitted the champions of South America and Europe.

Of course, Argentina’s big name is Lionel Messi, who has scored the most goals (91) and has the most caps (165) in Argentina history. The 35-year-old captain said this would be his final World Cup so there will be an even bigger microscope on one of the best players in the world.

This will also likely be the final World Cup for veterans Nicolas Otamendi (34) and Angel Di Maria, who would love to go out with another trophy raise after winning Copa America last summer.

Argentina are drawn in Group C with Mexico, Poland and Saudi Arabia and meet Saudi Arabia in their opener Tuesday in Lusail.

France arrive in Qatar as reigning World Cup champions after beating Croatia 4-2 in the final in Moscow. That said no one since Brazil in 1962 has repeated as World Cup champs.

Led by forward Kylian Mbappe, who has 28 goals in 59 appearances, Les Bleus are absolutely loaded in attack with veterans Antoine Griezmann and Olivier Giroud also threats to score.

France, though, were dealt a blow when veteran Karim Benzema became the latest player to be ruled out of the World Cup due to injury on the eve of the tournament opener. The 2022 Ballon d’Or winner joins Paul Pogba, N’Golo Kante, Christopher Nkunku and PresnelKimpembe as French casualties.

In Group D with Australia, Denmark and Tunisia, France open their title defense against the Socceroos Thursday in Al Rayyan.

Are England really a favorite? Or are the Three Lions just the most hyped (or overhyped) team in Qatar?

There’s just the one World Cup win — on home soil in 1996 — and a semifinal appearance four years ago being their best finish since exiting at the same stage in 1990.

Harry Kane, who has 51 goals in 75 appearances, is the player to watch and he’s joined up front by the likes of Raheem Sterling and Marcus Rashford, with Jordan Henderson anchoring the midfield.

England enter their World Cup opener Monday against Iran, in a group that also feature the United States and Wales, winless in their last six games.

Joining a group named above — Messi, Mbappe, Kane and Neymar is Kevin De Bruyne, the 31-year-old Belgium midfielder has 25 goals in 94 appearances, but it’s his ability to set others up that makes him a must watch.

Robert Lewandowski is another one of those players to keep an eye on because, like Messi, this could be the Barcelona forward’s final World Cup. The 34-year-old Polish striker has 76 goals in 134 appearances, including in a 2-0 win over Sweden to help Poland qualify.

You could put Luka Modric in the same category. The 37-year-old Croatian midfielder, who has 23 international goals in 155 appearances, was a guiding force in Croatia’s run to the 2018 World Cup.

Neymar is a much watch for all the drama that surrounds him, his brilliance on the ball and meme-inducing injury rolls. But Brazil is the favorite to win not just because of one player. Vinicius Junior could be ready for mega stardom in Qatar. He’s already burst onto the scene with Real Madrid and the speedy 22-year-old winger may be set for the next level for Selecao.

We couldn’t rightfully put together a list of players to watch without including Cristian Ronaldo right? The 37-year-old forward scores at a remarkable rate for Portugal, with 117 goals in 191 appearances. Ronaldo scored a hat trick against Luxembourg in World Cup qualifying and a brace in a 4-0 triumph over Switzerland in UEFA Nations League.

Canada vs. Belgium (Nov. 23): It’s been 36 years since Canada last played in the World Cup and Les Rouges impressed in booking their spot, finishing atop Concacaf qualification — ahead of both the US and Mexico. Alphonso Davies is an established global star. So too are Belgium’s De Bruyne and goalkeeper Thibaut Courtois.

USA vs. England (Nov. 25): This Black Friday showdown is the second for both teams in Group B so the importance will be determined by how both fare in their openers Monday. But this match should be highly entertaining. When they last played at the World Cup, the US rallied to tie England in 2010.

France vs. Denmark (Nov. 26): France are the reigning World Cup champions, though their hopes of repeating were dealt a tough blow by multiple injuries. Denmark, featuring midfielder Christian Eriksen, were semifinalists in the European Championships.

Spain vs. Germany (Nov. 27): Wait, this is a group stage match? Spain vs. Germany would scream quarterfinal or beyond usually, but we get the treat of the European powerhouses battling in their final Group E showdown.

Poland vs. Argentina (Nov. 30): Two of the top attacking players in the World — Messi and Lewandowski — meeting in a match that could decide spots in the knockout round? Let’s go.