Page: Who will master Augusta National in 2022?

Who will master Augusta National in 2022?

By Cameron DaSilva | Posted 7 months ago 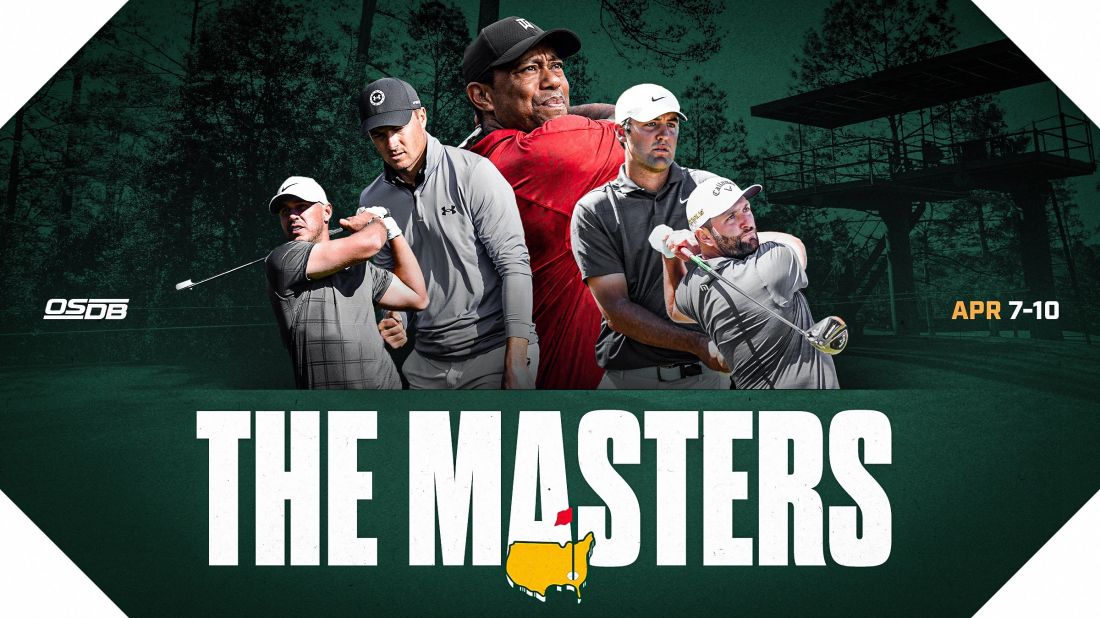 The first major of the year is always special, and not just because it’s the first on the calendar. It’s special because, well, it’s the Masters. The carpet-like fairways, the picture-perfect greens, the pimento cheese sandwiches.

It’s all here this week.

And so are the best players in the world. The star-studded field is absolutely loaded, with Tiger Woods making his triumphant return to competition and Hideki Matsuyama trying to defend his title.

Golf is as competitive as it’s ever been from top to bottom, with more than a dozen legitimate contenders to win the green jacket. That made whittling the field to the top 20 challenging.

Leishman has a great track record at Augusta, finishing in the top 13 four times, including three top-10s. Last year, he tied for fifth, and that was despite a final-round 73. He started the 2021-22 season strong with three top-10s in his first five starts, tying for fourth at the Fortinet Championship and third at the Shriners Children’s Open. He’s faded this spring, but he’s excellent on the greens (16th in strokes gained: putting) and ranks 21st in total strokes gained this season. He has a real shot to contend on Sunday.

Burns is making his Masters debut this week, which is a tough proposition for any player teeing it up for the first time at Augusta. But we saw Will Zalatoris tie for second in his debut last year and Burns is more accomplished with a well-rounded game to compete with the best. He has three PGA Tour wins in his career, all coming in the last 11 months. His most recent win came at the Valspar Championship in March, successfully defending his title.

Oosthuizen has only played five events in 2022 and hasn’t finished better than T14 in any of them. He didn’t make it out of the group stage at the WGC Match Play and tied for 62nd the week prior at the Valspar. However, despite a limited schedule, Oosthuizen is poised to be in contention this week. He’s finished worse than T29 only once at the Masters since 2014, though he hasn’t come in the top 10 here since 2012.

Im has  played in the Masters twice and he had vastly different results each time. In 2020, he tied for second. Last year, he missed the cut. He’s only made the cut five times in 10 major appearances, so he doesn’t always play well in big events. But he does have two PGA Tour wins and doesn’t have much of a weakness in his game. He plays a ton of tournaments, too, so he’s constantly competing. He has five top-11 finishes this season.

Niemann won his second Tour event in February at the star-studded Genesis Invitational, finishing 19-under for the week to win by two shots. It was his third top-10 of the season and he has four top-25s in 11 starts this season. His recent form could be better, as could his Masters record (missed cut and T40 in two tries), but Niemann’s ball striking should yield positive results this week.

If Zalatoris were a better putter, he’d be higher on this list. But his alarmingly bad 170th ranking in strokes gained: putting is a real cause for concern at Augusta. Then again, he was 122nd in that category last year and still tied for second in his Masters debut. I’m banking on his ball striking (1st in SG: tee-to-green) and length off the tee as a reason to feel confident in the 25-year-old making his second start at Augusta.

Lowry had a legitimate chance to win the Honda Classic in February, finishing solo second. He followed that up with a tie for 13th at The Players and T12 at the Valspar, breaking off a really strong stretch of play in the last two months in advance of the Masters. He has back-to-back top-25s at Augusta the last two years, too.

Good luck finding a weakness in Fitzpatrick’s game. He may not have a win this year, but he has four top-10s and in the eight starts he’s made, he’s finished in the top 25 five times. He tied for seventh here in 2016 and has made the cut at the Masters in six straight years. He needs to play better in majors – only one top-10 – but that should come with time. Very quietly, he’s become one of the most consistent players on tour.

All Cantlay does is finish in the top 10. He’s done so four times in seven starts this season after winning the FedExCup and Tour Championship last year, a year in which he had four wins. What’s concerning is his Masters record, missing the cut twice in the last four years – though he does have a T9 and T17 in between those missed cuts. One of the best putters in the world, Cantlay should be around late on Sunday with the way he’s playing right now.

Could Hovland be poised for a year like the one Cantlay had in 2021? He already has one win and four top-10s in 10 starts, also winning the Hero World Challenge, which is an unofficial event. During a stretch of three big non-majors (Genesis, Arnold Palmer Invitational, Players), Hovland finished no worse than tied for 9th in any of them. He tied for 21st at last year’s Masters and was the low amateur (T32) in his debut in 2019. This course suits him well.

It’s Jordan Spieth at the Masters. What more do you need to know? His two worst finishes here were in 2019 and 2020 when he went T21 and T46, respectively. Otherwise, he never finished worse than T11, has one win and five top-3 finishes at Augusta. He’s as reliable at the Masters as any player at any other tournament. He was shaky at the Valero Texas Open last week and only has one top-10 in his nine starts this season, but this is the course that will get things back on track for him.

Schauffele doesn’t miss cuts and he always seems to be in contention late despite not having a win on tour since the beginning of 2019. In four Masters appearances, he’s never missed the cut and tied for second in 2019 and third last year. Could this be the week he breaks through to win his first major after finishing in the top 10 nine times in the past?

In his last five starts, Scheffler has three wins, including two weeks ago at the WGC Match Play. That’s propelled him to No. 1 in the world, and this will be his first start at that top ranking. Don’t expect the pressure to get to him because Scheffler is cool as a cucumber when in the spotlight. In his only two Masters starts, he tied for 19th and 18th. And last year, he finished top 10 in three of the four majors. Now is the perfect time for him to win his first major.

This will be McIlroy’s eighth attempt at completing the career grand slam. He’s come close to winning his first green jacket in recent years, tying for fifth in 2020 and finishing in the top 10 at the Masters every year from 2014-2018. He shockingly missed the cut at the Valero Open and tied for 33rd at The Players, only thanks to a final-round 66. Even though his recent form may not be the greatest, his driver on a softer Augusta National makes him one of the favorites. Now, if he can just avoid a disastrous first round…

Morikawa has improved dramatically as a putter, going from 178th on tour in 2021 to 31st this season. That’s scary for everyone else in the field. Arguably the world’s best ball-striker, Morikawa has the skill set to make a run at his first green jacket. And he proved in the last two years that he’s excellent in majors; he has two wins already and was top-10 in three of the four majors last year. Coming off a good showing at the WGC Match Play, Morikawa is primed for a top-10 finish this week, if not a win.

Smith nabbed two wins already this season and has finished in the top 10 four times in seven starts. An absolutely deadly putter, Smith is exceptional on the greens, especially on anything inside 10 feet. Pair that with his ball striking and he’s a great fit at Augusta. Since 2018, he has three top-10 finishes at the Masters, including a runner-up in 2020. He might not bring the big-name flare that the other top favorites do, but Smith is a real threat this week.

DJ followed up his fall 2020 win at the Masters with a shocking missed cut here last year. His last win was at the Masters two years ago but he finished fourth at the WGC Match Play two weeks ago and tied for ninth at The Players – two loaded events. I'm not going to bet against Johnson at Augusta just because he missed the cut last year. Prior to that result, he finished in the top 10 in each of his previous five Masters starts.

Rahm has looked confused on the greens at times this season, which goes hand-in-hand with his 136th ranking as a putter in 2022. He still has four top-10s, including a ninth-place finish at the WGC Match Play in his last start. In each of his last four Masters appearances, he’s come in the top 10 and tied for fifth last year – a season in which he was top eight in every major. He shouldn’t have much trouble on the always-consistent greens at Augusta.

Even though he’s one of the best players in the world, Thomas has just five top-10 finishes in majors during his career, including his win at the PGA Championship in 2017. His best week at the Masters was a fourth place in 2020, his only top-10 showing here. Yet, I love him this week. His length off the tee will be an advantage, as will his shot-shaping. With an iron in his hands, Thomas is one of the best in the world, ranking fifth on tour in SG: approach the green.

In his career, Koepka has finished in the top five at a major 12 times. That’s absurd. He almost won his first green jacket in 2019 when he tied for second and he also tied for seventh the year after before missing the cut in 2021. He’s heating up at the perfect time, too, tying for 12th at the Valspar and making it to the quarterfinals of the WGC Match Play. We all know how Koepka takes his game up a notch in the majors and this year will be no different. Healthy and ready to roll, Koepka is my pick to win.