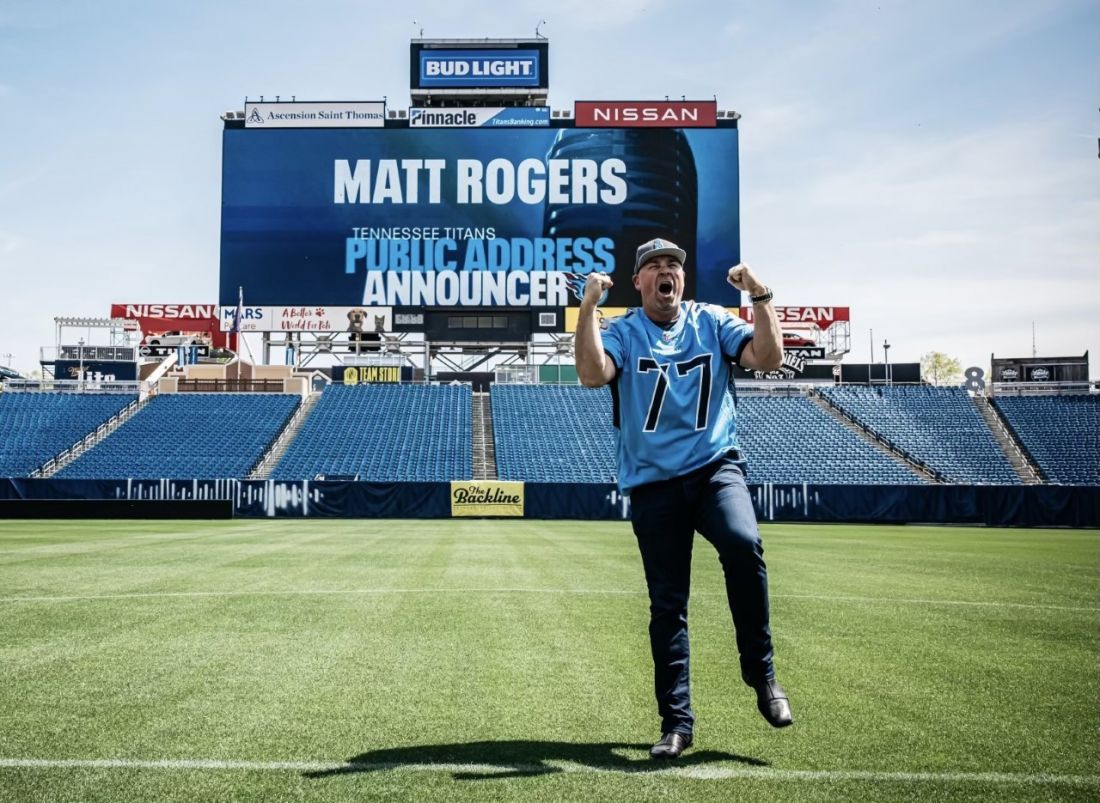 In many respects the five other talented public address announcing candidates for the 2021 Tennessee Titans never stood a chance.

This was Matt Rogers’ moment. Another soul-lifting moment in a life of good fortune. Rogers is kind-hearted, determined, uplifting and there’s a good argument to be made that the newest Titan announcer has the Midas Touch. He is an optimizer.

Rogers, 42, has been a winner on television game shows from the Price is Right to Family Feud; he turned a Top-10 appearance on American Idol in 2004 -- competing alongside eventual Academy Award winner Jennifer Hudson -- into successful hosting gigs with the Discovery Channel and USA Network.

He played on a Rose Bowl-winning University of Washington football team in 2001 and just completed a season doing public address announcing for the Tennessee 5A state football champions, Summit High School.

When the Titans put out word they were looking for a public address announcer – and would hold an audition judged by both team management and Titan fans – Rogers was ready. And optimistic as usual. With good reason.

“I instantly got excited, and was like “this is it, this is my shot,’ Rogers told OSDB Sports recently. “And they opened it up to the public and had you submit your tape. So, I submitted my tape with a couple hundred other people, and they called me in to be one of the Top-20 finalists and do my thing on the mic in the stadium.”

Rogers, already a Titan season-ticket holder, found out the job was his in a fittingly grand manner. Standing at midfield with his arms over his head, dressed in a No. 77 Titan jersey he watched Titans offensive tackle Taylor Lewan reveal the good news on the huge screen inside the stadium.

“I can’t remember being that nervous or excited about anything since “Idol,” Rogers said. “I was shaking when I was holding the mic [in the audition]. I was so excited. And then it went from Top-20 to Top-6 and then I found out a few weeks ago, they brought me into the stadium and announced it on the big screen. I was so pumped and I started crying in a good way.

“It was awesome. It’s like a dream come true in a lot of ways.”

This weekend, Rogers and Titan fans had more good fortune come their way – an unexpected boost for the upcoming season with news that the team had traded for Pro Bowl wide receiver Julio Jones.

“We got a seven-time Pro Bowler and future Hall of Fame wide receiver for basically a second round pick next year,’’ Rogers said. “We have the best freaking general manager in the NFL.’’

His enthusiasm is genuine and wide-reaching; something Titans fans will soon learn. Those around Rogers notice immediately. His upbeat personality is unmistakable. And hereditary, apparently.

America had a chance to meet his young daughter Sam in 2017. The precious curly-haired toddler had already earned tens of millions of views after Rogers posted a video on Facebook of her flipping bottles. The pair were guests on the Ellen DeGeneres show, “Ellen” where Sam charmed the host and viewers alike.

It gave the Rogers a chance to talk about cystic fibrosis – a disease both Sam – now 6 – and her older brother Mason, 13, have dealt with their whole lives.

Today, Sam (named after Matt Rogers’ late mom Sandra) and her older brother are thriving and overcoming. She’s an accomplished gymnast and soccer player and Mason plays football and soccer. Their older brother Brayden, 15, does not have cystic fibrosis.

Rogers has taught his children – even as they deal with sickness – the power of positivity. And when it comes to Rogers, he’s been the ultimate example.

“Not to go too deep, but I think it’s God’s timing,’’ Rogers said. “If you look at me on paper compared to the other five finalists [for the Titan job], I’m the least qualified.

“There was one guy, that did presidential speech voiceovers, Olympic Games. Another guy who was voice of Vanderbilt University. Another guy that works for the University of Tennessee. Stormy Warren hosts the biggest show on SIRIUS Radio, he’s huge.

“So, you look at me, here’s a guy that hosted a couple reality shows, so what? What makes him qualified? So, I think if you position yourself and you’re ready, when the opportunity comes, it’s there.

“For me, I was in the right position and the opportunity came and I think my passion overrode other people’s experience.

“This is why I think I got it. My passion came through and it spoke louder than the other people’s resumes and I think that’s why I got the job.’’

“The things I’ve done put me in the right position to get the job when the opportunity presented itself.’’