By Steve Tsilimos | Posted 5 days ago 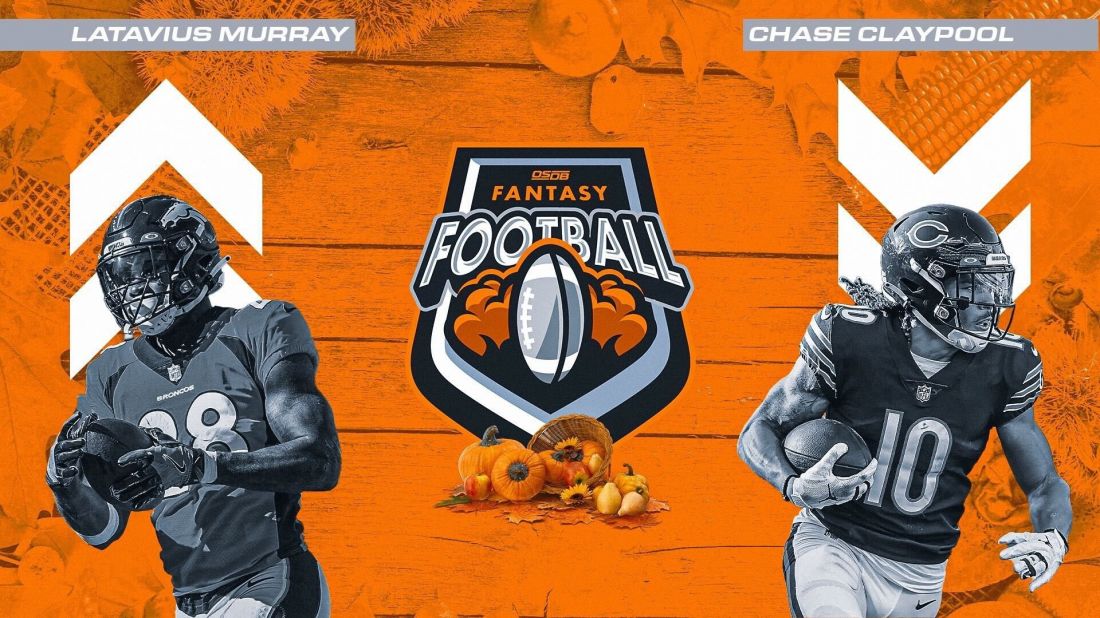 As always, Thanksgiving weekend is set for a full slate of NFL games and marks the beginning of the end of the season. If you would have told me before the season the NFC East would be the division with the most wins before Thanksgiving, I would have laughed in your face. The leader of the division, the (9-1) Eagles have the best record in the NFL – two games ahead of the (7-3) Cowboys and the (7-3) Giants.

Injuries add up as the NFL season progresses, and teams rely on players who were once looked at as backups. That is exactly how three backup-RBs ended the week inside fantasy’s overall top-10 in Week 11. Injuries and bye weeks also force fantasy managers to look toward new players to fill out their starting roster.

Dance if you've given your managers 10 TDs so far this season ⬇️pic.twitter.com/xTnwXXbU4S

Week 12 doesn’t feature anyone on a bye, but Week 11 had its fill of injuries to fantasy starters. If you are one of the lucky ones who is still competing for a playoff spot, then it is more important than ever to figure out if you can use the waiver wire to make improvements to your roster.

There are many players you should be aware of that are trending up heading into Week 12. WR Darius Slayton, WR Donovan Peoples-Jones, RB Najee Harris, and RB Devin Singletary are all trending in the right direction and could help you win a championship.

No teams are on a bye this week. The NFL has scheduled three games on Thursday for the holiday, so there is a break in the bye week schedule this week. There are two more weeks with teams on a bye in Weeks 13 and 14.

• Falcons TE Kyle Pitts suffered a torn MCL against the Bears and has been placed on the IR, practically ending his season.
• Bears QB Justin Fields had his left shoulder evaluated by doctors after the game, and there are conflicting reports about the QB. His status is in question for Week 12.
• Bengals RB Joe Mixon (concussion) was ruled out against Pittsburgh in the third quarter.
• Broncos RB Chase Edmonds has a high ankle sprain that will force him to miss multiple weeks.
• Chiefs RB Clyde Edwards-Helaire suffered a high-ankle sprain that could be serious enough to land him on the IR.
• Chiefs WR Kadarius Toney left Sunday night’s game and never returned due to a hamstring injury. His status is questionable for Week 12.
• Chargers WR Mike Williams (ankle) left the game in the first quarter and never returned. Williams re-aggravated his high-ankle sprain that forced him to miss the last two games, but the damage does not seem significant.
• Rams QB Matthew Stafford was evaluated for a concussion during the third quarter and did not return. Stafford just cleared the concussion protocol a week earlier, which makes this news a bit concerning for the Rams’ QB.
• Giants WR Wan'Dale Robinson tore his ACL on Sunday and will miss the remainder of the season.
• Steelers RB Jaylen Warren (hamstring) is questionable for Week 12.

Kirk Cousins and the Vikings offense had their worst game of the season against the Cowboys' stellar defense, losing 40-3 on Sunday. With LB Micah Parsons and company harassing him all day, Cousins completed a lousy 12 of 23 pass attempts for 105 and had a fumble. Things do not get much easier for Cousins as the Vikings play host to the Patriots’ ninth-ranked defense against opposing QBs. Cousins had his best fantasy game in a Week 8 win against a porous Cardinals defense, but since then has been trending down as his competition has increased. It doesn't get easier for Cousins until Week 14 when he travels to Detroit to take on the league's worst defense.

Darrell Henderson Jr. was surprisingly waived by the Rams on Monday. Henderson entered the year as LA's top-RB and is one week removed from scoring a TD with his former team. Just a few weeks ago, it looked like the Rams were going to part ways with RB Cam Akers, but something changed, and Akers ended up leading the team in rushing in a 27-20 losing effort to the Saints. The defending Super Bowl champs are in shambles after losing four straight, and it is really confusing what has happened with their RBs this season.

The release of Henderson means rookie-RB KyrenWilliams will see his fantasy value increase. I would not cut Henderson quite yet because this could end up working in his favor. The best-case scenario is that he gets picked up and thrown right into action on a better offense.

Here’s our best guess as to why the Rams waived Darrell Henderson Jr. at this point in the season https://t.co/d9pkbzs4e2

Chase Claypool only has five catches for 32 yards on 11 targets in his first three games with the Bears. There is not enough volume to justify keeping Claypool on your bench. The Bears' offense will take a huge step back if QB Justin Fields misses any time. The Jets have one of the best defenses in the league, and I would avoid all Chicago pass catchers if Fields can’t suit up this Sunday.

Robert Tonyan has gone five straight games without scoring more than six half-PPR points. The Packers' passing attack has been a shadow of what it was last year. It’s been difficult to predict who will receive the bulk of Aaron Rodgers's targets. Tonyan has only scored one TD on the season, so it’s time to give up hope that the TE will become Rodgers’ favorite red-zone target. Even in a world where tight ends are not scoring many fantasy points, ‘Big Rob’ Tonyan should be sent to the waivers.

Ryan Tannehill posted his first 300-yard performance of the year against a Packers banged-up secondary on Thursday night. The Titans’ QB has now finished in the top-12 at the position the past two weeks with over 19 fantasy points in each of the weeks. Tannehill’s success may be directly related to the return of first-round rookie WR Treylon Burks from the IR in Week 10. The (7-3) Titans have quietly dominated the AFC South and are tied for the second-best record in the AFC, and seem to be just hitting their groove. The Bengals’ defense has been tough on opposing QBs, but if the Titans want to keep up with the Bengals' high-scoring offense, they will need to throw the ball and score TDs, making Tannehill a perfect streaming option.

It is painful to watch 32-year-old Latavius Murray run the football at this stage of his career. But as I have stated many times before, touches and opportunity are usually more important than talent in fantasy football. Denver wasted no time and released RB Melvin Gordon III after he committed his fifth fumble on the season this past Sunday. Newly acquired RB Chase Edmonds will miss some games due to a high-ankle sprain. What Murray lacks in explosiveness and elusiveness is made up for by the fact that he should dominate the Broncos’ RB touches this week. The Broncos' offense has been miserable this season, but Murray is worth a start solely based on usage against a struggling Panthers’ defense.

Rookie-WR Treylon Burks had his breakout game on Sunday with eight receptions for 111 yards on eight targets in his second game back from IR. Burks was targeted a whopping 38% of the time he was in a route in the Titans' 27-17 victory over the Packers on TNF. The No. 18 overall pick in last year's draft has the size and skills to dominate in the NFL, but injuries have slowed his progression this season. Now that he is healthy and the Titans are finding their groove, Burks looks like a nice WR2/3 for the rest of the season.

The Saints have two of the top-seven TEs this fantasy season. Juwan Johnson, who is ranked seventh at the position, did not finish above TE20 through the first six weeks of the season. Those days are long gone, and over the past five weeks, Johnson has become a trustworthy fantasy starter. Johnson has finished as TE8 or better every week but one since Week 7. In those five weeks, Johnson has scored five TDs. The 49ers are the third toughest defense on opposing TEs, but the third-year TE’s red-zone usage makes him a nice start at a position that is full of players who are touchdown or bust.