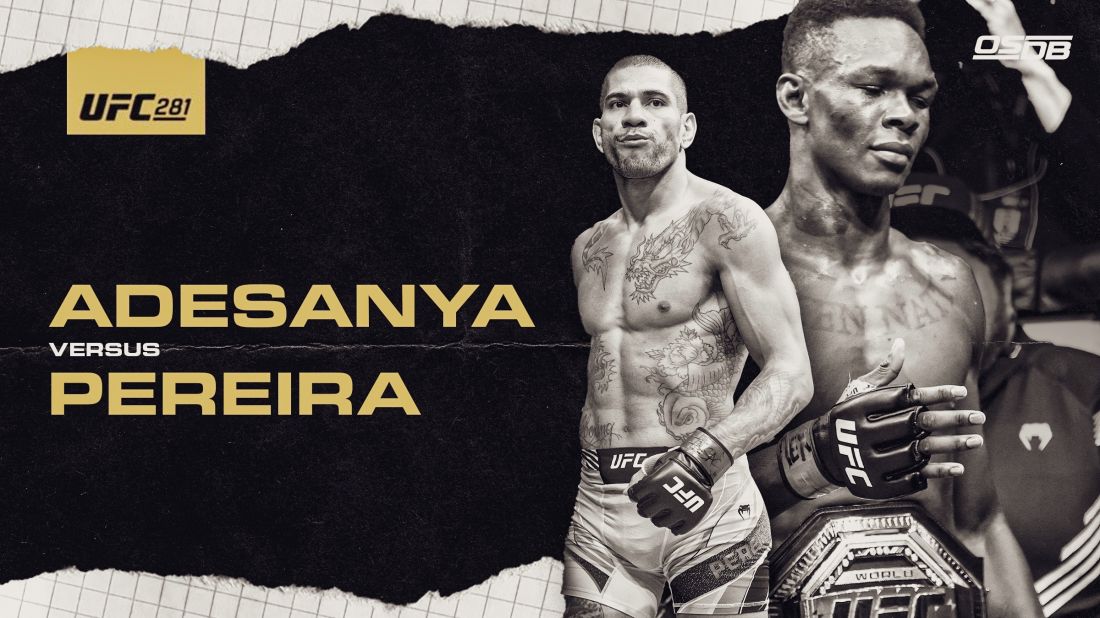 For all the hype and excitement that surrounded UFC 280 last month in Abu Dhabi — and rightfully so — this weekend’s return to Madison Square Garden in New York City for UFC 281 is actually the better card from top to bottom.

There are more prospects, more competitive, critical matchups, and more stories to track and names to know than any other event this year, all culminating in a middleweight title fight between Israel Adesanya and Alex Pereira that brings their kickboxing rivalry into the Octagon with UFC gold hanging in the balance.

Each trip to MSG has produced something memorable for the UFC, and this weekend should be no different.

So sit back, settle in, and get yourself excited for what’s on deck tomorrow evening with our UFC 281 preview.

Blanchfield is one of the best prospects in the UFC, and possibly the best, full stop.

The 23-year-old New Jersey native, who fights out of New York City, is 9-1 in her career and enters her bout against Molly McCann on Saturday riding a six-fight winning streak, which includes victories in each of her first three UFC assignments.

There are a couple things that differentiate Blanchfieldfrom other emerging talents.

For starters, she’s faced quality competition throughout her career, including four future UFC competitor on her way to the Octagon, which means she’s not trying to acclimate to a different skill level now that she’s on the big stage. Secondly, her lone career loss — a 2019 defeat to one of those future UFC fighters, Tracy Cortez — came by split decision, and each time I watch it, I still score the fight for Blanchfield.

But the biggest thing is what she showed last time out against JJ Aldrich, and that’s an ability to stay present when things are going poorly and still find a way to win.

Aldrich was picking her apart on the feet, but Blanchfielddealt with the offense coming her way, and when the veteran left her neck exposed for a beat too long, the Brazilian jiu jitsu black belt latched onto a guillotine choke and secured the victory.

Saturday’s bout with McCann is her biggest UFC bout to date, and although McCann has the higher profile and greater fan following, Blanchfield is already ahead of her in the rankings and the betting favorite.

A victory this weekend should propel her into the Top 10 in the flyweight division and make it clear to everyone that she’s one to pay close attention to in the 125-pound weight class.

Puelles, who kicks off the pay-per-view main card in a matchup with Dan Hooker, is a 26-year-old Peruvian riding a five-fight winning streak and looking to make a real statement in what is his first real showcase opportunity.

He debuted in the UFC as a baby-faced competitor on The Ultimate Fighter: Latin America 3, losing in the lightweight tournament finale. His next four-and-a-half years featured only two appearances, both wins, before he relocated to South Florida and began competing more regularly last summer.

Puelles has a couple things going for him that make him an intriguing fighter in the talent-rich lightweight ranks: (1) he’s grown into his body and morphed into a physical specimen with good measurables, a little bit of pop, and more upside to potentially tap into; and (2) he seems to have a “finishing move” as if this was professional wrestling, having earned consecutive victories and three of his last five wins via kneebar.

Now, Hooker represents a significant step up in competition for Puelles, but that’s exactly what you want to see from a promising young fighter on a quality winning streak. This is the kind of test that he needs to pass in order to break through into the Top 15, and if he can beat Hooker, plenty of people will be calling for a fight of that magnitude.

And if he catches another kneebar, folks will understandably lose it.

Poirier and Chandler are each looking to stay in the hunt at lightweight while also not facing any of the dangerous up-and-comers climbing the divisional ladder at the moment. Instead, the recent title challengers have steered into their dislike for one another and agreed to settle it with punches and kicks on Saturday night for all to enjoy.

This will be Poirier’s first fight since losing to Charles Oliveira last December, while Chandler rebounded from being on the receiving end of a hellacious beating and unanimous decision loss to Justin Gaethje last year at MSG with a second-round knockout win over Tony Ferguson in May.

It’s a fun pairing between two veterans that always deliver, but also an interesting fight to keep tabs on because there has been a change at the top of the division and you can be sure each of these men would like another kick at the championship can, even if Islam Makhachev presents serious matchup problems for each of them.

A big finish from either one likely results in the winner calling out the champ, while the vanquished fighter will have to figure out a way back into the mix or find a new feud to ignite if they want to remain in the spotlight in 2023.

The first of Saturday’s two championship bouts features two-time strawweight titleholder Carla Esparza looking to defend her title against former champion Zhang Weili in a bout where the challenger is a considerable favorite.

Esparza reclaimed the belt with a split decision win over Rose Namajunas earlier this year in a fight that is best described as forgettable — neither did much of anything over the course of 25 minutes, leaving the judges to split hairs in determining a winner and observers to pull theirs out wondering what the hell was going on.

Zhang, who dropped a pair of fights to Namajunas in 2021, got back into the win column with a second-round knockout of Joanna Jedrzejczyk in June, dispatching the former divisional ruler with a spinning backfist.

The challenger is the more dynamic athlete and well-rounded fighter of the two, but that has been the case in many of Esparza’s bouts, and yet “The Cookie Monster” enters on a six-fight winning streak with USFC gold wrapped around her waist, so dismissing her chances seems foolhardy, if not flat-out insulting.

Everything in this fight will hinge on the early grappling exchanges between the two and whether Esparza is able to put Zhang on the canvas and keep her there.

If she’s successful or makes the Chinese challenger work hard to defend early, it could get real interesting, but if Zhang shucks her aside with ease, it could be a long night — but also maybe a quick night — for the champion.

Adesanya is the best middleweight on the planet, sporting a 23-0 record in the 185-pound weight class, including three consecutive successful title defenses since his failed bid to claim the light heavyweight title resulted in the lone loss of his career.

Creative and confident, the 33-year-old “Last Stylebender” has defended his title five times overall and enters Saturday’s contest having beaten the top three contenders in the division in succession.

By comparison, Pereira is just 6-1 in his mixed martial arts career, and 3-0 in the UFC. He made his promotional debut one year ago at Madison Square Garden, dispatching Andreas Michailidis in a squash match before navigating all three rounds against fellow Brazilian Bruno Silva in March, and knocking out Sean Strickland at UFC 276 in July.

He’s not really passed all the tests you would like to see a fighter face before garnering a championship opportunity, but none of that matters because the intrigue surrounding this fight has nothing to do with their exploits in the Octagon and everything to do with their history in the kickboxing ring.

Pereira beat Adesanya twice during their kickboxing days — once by knockout, the other time by decision — and since his arrival in the UFC, this is the fight everyone has wanted to see in order to figure out if the Brazilian behemoth simply has Adesanya’s number.

The champion has come under fire for going the distance in each of his last three wins, with critics wanting him to take more chances against seemingly overmatched opposition. In Pereira, it appears he’ll have a challenger that will force him to engage throughout or relinquish his throne.

What’s so compelling here — and Adesanya has spoken about this since “Poatan” arrived in the UFC — is that their second meeting took place well over five years ago and in a completely different sport, so using it as a barometer for how things may play out in the UFC 281 main event could be a serious miscalculation.

But like every other question swirling around this contest and the whole of this weekend’s card, we’ll only know for sure once the athletes make the walk and the action gets underway inside the Octagon on Saturday evening.