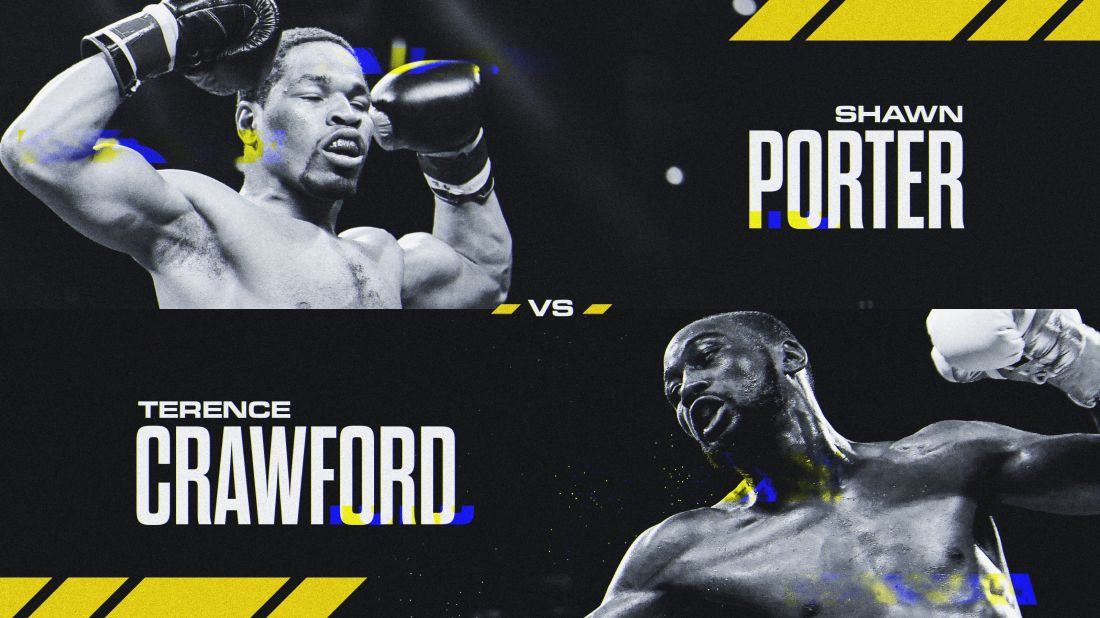 Before getting into a breakdown and the key talking points, here’s how the men measure up:

Don’t let the fact that they each turned 34 this fall fool you into thinking that Crawford and Porter are at the same point in their respective careers, because they’re not. This is a major step up in competition for the undefeated defending champion.

Crawford has earned stoppages in each of his last eight appearances and has seen the scorecards nine times in his career, most recently putting away Kell Brook in the fourth round of their scheduled 12-round clash just over a year ago at the MGM Grand.

As impressive as Crawford has been and as shiny as his record looks on paper — and it does look shiny — he’s had to navigate a smattering of dodgy moments inside the ring during his recent victories, and now “Bud” is stepping in against a seasoned vet who can present some problems if he’s not careful.

Porter is still an excellent fighter, but he’s probably a step beyond his prime, which saw him claim multiple titles, go unbeaten in his first 25 fights, and post victories over the likes of Devon Alexander, Paulie Malignaggi, Danny Garcia, and Yordenis Ugas.

Two fights back, “Showtime” dropped a split-decision to one of the other superstars in the division, Errol Spence Jr., in a fight where two judges had it 116-111 for Spence and the other 115-112 for Porter. The fight felt closer than those scores suggest, as the two went toe-to-toe until the late stages, when the undefeated Spence scored an 11th-round knockdown and sealed the victory by taking the final two frames.

That fight — or at least the way Porter made Spence make adjustments and work for the victory — feels like it could be a bit of a precursor to what we see.

Porter is going to get after you — that is just who he is and what he does. He’s aggressive, throws volume, and is going to do his best to draw Crawford into a brawl, which is something the undefeated defending champ has been known to let himself get drawn into from time to time.

It served him well against Spence, who had work his way out of troublesome spots for the first time in his career, and represents Porter’s best (and maybe only) path to victory.

How this plays out likely comes down to how Crawford wants to play it.

If he elects to meet Porter on his terms and get into a brawl, he’s courting danger. He’s still the favorite and is certainly more than capable of beating Porter much in the same way Spence did two years back. That’s the risky road to travel.

The safer path for Crawford is to set his ego aside and box Porter, who doesn’t have the speed and technical acumen to hang with the longer, crisper southpaw from Omaha.

There is more on the line than Crawford’s WBO welterweight title, and that’s where things get interesting.

This is the last fight on Crawford’s deal with Top Rank, and an undefeated champion hitting the open market is always of note, especially given the frustration Crawford has expressed in the past about a fight with Spence failing to materialize. Conversely, a loss here changes where Crawford stands in the hierarchy of top welterweights, not to mention the pound-for-pound rankings, and could be disastrous.

As an added wrinkle — and one that is in play — what kind of extra juice does it give Crawford to finish out his Top Rank deal by stopping Porter, who has lost three times and never been put away? If he wants to make a statement, up his asking price, and ratchet up the interest in a fight with Spence or Ugas, who beat Manny Pacquiao in August, putting Porter away is the way to do it.

How this one plays out will have a ripple effect on the welterweight division heading into 2022 and should give us plenty to talk about once the dust settles and the smoke clear.

Terrence Crawford vs. Shawn Porter takes place on Saturday night at the Michelob Ultra Arena in Paradise, Nevada, and airs exclusively on ESPN+.