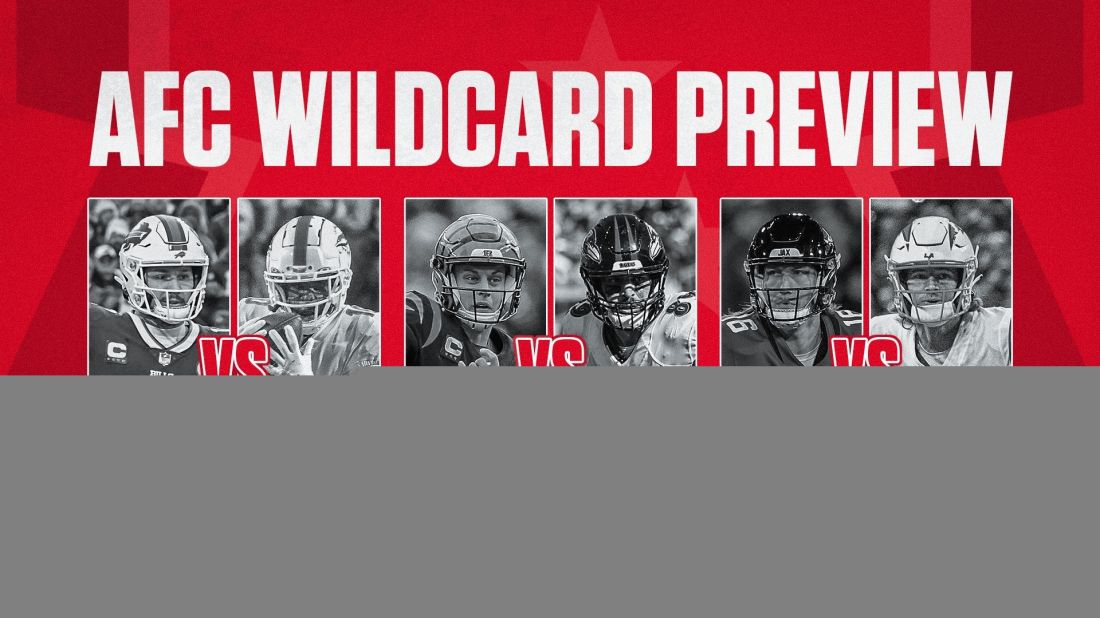 The NFL postseason is upon us, and Super Wild-Card Weekend begins on Saturday. The Kansas City Chiefs (14-3) secured the top seed in the AFC, earning themselves the comfort of a first-round bye.
Patrick Mahomes is the frontrunner to win league MVP for the second time in his career. The Chiefs are resting, waiting for the dust to settle, while the remaining six AFC squads prepare for battle.

In the AFC, the Jacksonville Jaguars are our Cinderella Story of the season, and they play host to the Los Angeles Chargers. Trevor Lawrence and the Jags won five straight games to close the regular season, including two key victories against the division rival Tennessee Titans. The final head-to-head battle between Jacksonville and Tennessee was a tense tussle that went down to the wire in Week 18.

The Jaguars were down 16-13 with just over three minutes left in the game, but Jacksonville’s defense came up huge. Jags’ safety Rayshawn Jenkins forced Titans’ QB Joshua Dobbs to fumble, and linebacker Josh Allen snatched up the gift to cash it in for a touchdown. Jacksonville won 20-16, thereby claiming the AFC South title and a playoff berth.

The Chargers are not entering the playoffs with quite the same surge of positive momentum as the Jaguars, but L.A. did win four consecutive contests before losing 31-28 in Denver during Week 18. Justin Herbert finally has most of his offensive weapons on the field again, and it’s a formidable group. Despite playing with a skeleton crew on offense for chunks of the season, Herbert threw for 4,466 yards (second only to Mahomes in the AFC). Austin Ekeler has enjoyed another tremendous campaign, and the Chargers are tired of playing second fiddle to those guys in K.C.

We can expect the Chargers and Jaguars to put on a serious fireworks display this coming Saturday at TIAA Bank Field. Both squads are fiery, playing with swagger, and have something to prove. It makes sense that the point spread for this game is the smallest out of all of the Wild Card contests. Los Angeles is favored by one on the road.

Prediction: The Jaguars use the home dog disrespect and the momentum that their young talented squad has generated to “upset” the Chargers. Jags 27, Chargers 20

The Miami Dolphins have had ups and downs in what has been a bit of a roller-coaster season. The Dolphins made it into the postseason flying by the seat of their pants with a weird win against the Jets in Week 18. WR Tyreek Hill injured his ankle against the Jets, and his status for the Wild Card game is uncertain. QB Tua Tagovailoa is still dealing with concussion issues and it’s looking unlikely that he’ll be available.

There are a lot of question marks flying around for a team that lost four of its previous five games and are now heading into Buffalo to face a team that is in emotional overdrive. The Bills are still processing teammate Damar Hamlin’s on-field cardiac arrest and all of its complicated aftermath, but it is clear that Buffalo wants to win for #3.

Hamlin’s recovery has been quite miraculous, and the Bills returned the opening kickoff against the Patriots in Week 18 for a 96-yard touchdown. RB and apparent special teams magician Nyheim Hines wasn’t done, either. Hines returned a second kickoff for a score en route to a 35-23 thumping of New England, helping to eliminate the Patriots from contention. Josh Allen threw three touchdowns, and the Buffalo defense intercepted three of Mac Jones’ passes. The Bills and Dolphins split the season series, but Buffalo has won seven straight games and is eyeing the Lombardi Trophy.

Prediction: Bills Mafia is seething, sharpening the knives, while the Dolphins wander into what will later be called “The Highmark Wild Card Massacre”. Bills 45, Fins 9

The Baltimore Ravens and Cincinnati Bengals clashed in Week 18 and will be in each other’s way again Sunday. Most recently, the Bengals won 27-16 at home against the Ravens, but Baltimore has been decimated by injuries and had Anthony Brown behind center. Brown completed just 19 of 44 passes and threw two picks.

Reports indicate that there is a “strong chance” that Lamar Jackson will be back in action for the Ravens this weekend. If that is true, the 6.5 points that Baltimore is currently getting from the sportsbooks will shrink considerably. The Ravens beat the Bengals in Week 5 by a score of 19-17, riding the silky smooth connection between Jackson and workhorse TE Mark Andrews. If both Jackson and Andrews (and RB J.K. Dobbins) are on the field this Sunday night at Paycor Stadium, the Ravens are a threat.

However, it’s important to note that the Bengals are coasting on the hottest winning streak in the NFL right now. Cincinnati has won eight consecutive games, and Joe Burrow has quietly helped to sneak his team deep into the hunt once again. This is a difficult matchup to predict with the limited information available, but here we go.

Prediction: Jackson, Andrews, and Dobbins all play for Baltimore and we have a nasty nailbiter on our hands. In the end, it’s not enough. Cincy squeaks out the win on a last-second field goal. Bengals 26, Ravens 23