Page: Shawne Merriman is Lights Out no matter what he tackles

Shawne Merriman is Lights Out no matter what he tackles

By Cameron DaSilva | Posted 24 days ago 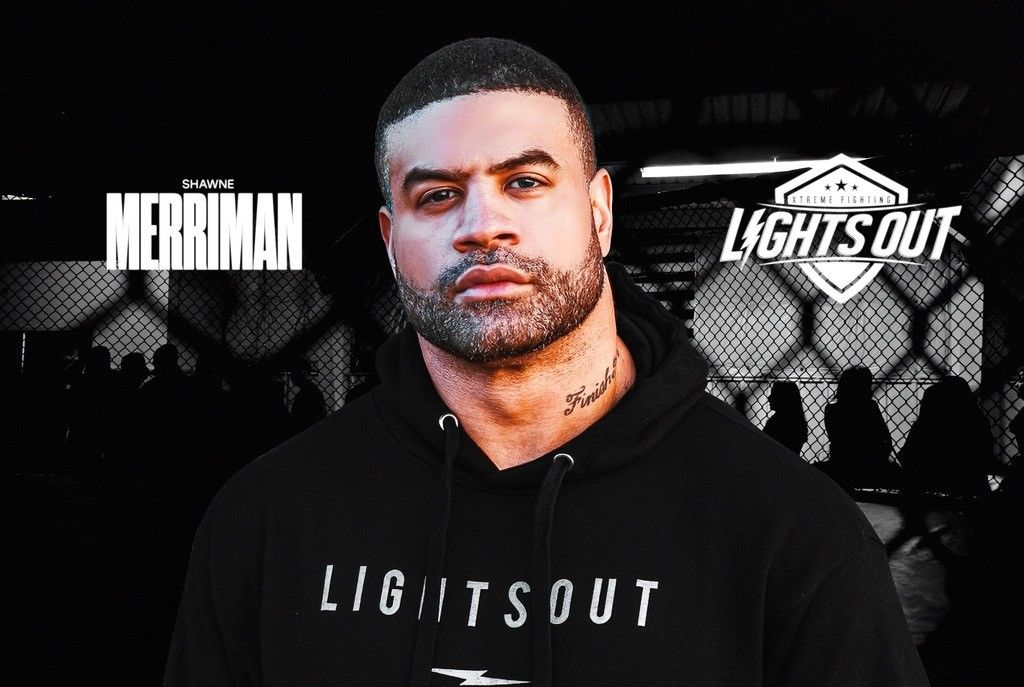 Shawne Merriman was a three-time Pro Bowler, the 2005 Defensive Rookie of the Year and led the NFL in sacks during his playing days. He was unquestionably one of the most feared pass rushers, dominating from his first season as a rookie out of Maryland with 10 sacks in Year 1.

Injuries limited him but he prepared for life after football while he was still crushing quarterbacks and leveling ball carriers. It all started when he was 16 and earned the nickname “Lights Out” after he knocked out four kids in a high school game with his ferocious hits.

Walking the halls, the following Monday, everyone was calling Merriman “Lights Out,” and the nickname has stayed with him -- through college, the NFL and after he retired. It’s been part of his apparel brand and an MMA league, Lights Out Xtreme Fighting, which has found success in its first two years.

That, despite the COVID-19 pandemic throwing a wrench into the LXF’s plans, shutting things down last March as the fourth event was just about to get underway. The halt came during weigh-ins, which was a crushing blow for Merriman and all of his fighters.

“We got shut down the day of the weigh-ins two years ago,” Merriman told OSDB Sports via phone. “This was our fourth fight coming out of the gate. I had a lot of people come there that wanted to see the progress, what we were doing. A lot of execs from networks, and streaming services and sponsors. I’m all loaded up because we’re about to have our biggest event yet. We get shut down during weigh-ins. I was crushed because I was seeing the momentum we were getting and how fast things were growing. It was like the ultimate punch in the gut.”

As frustrating as it was for Merriman -- who moved to Las Vegas this year and handles the promoting for the LXF -- he felt worse for the fighters who trained so hard ahead of the event. But the LXF has bounced back, striking a deal with FuboTV to broadcast fights on its streaming service.

“These guys, they train their asses off for months at a time. This is what they do for a living and how they make their money and take care of their families,” Merriman said. “I was like, this sucks all the way around. And just like everybody else, I thought the pandemic was going to last a couple months, we’d wait it out and come back in three-four months.

“A full year goes by and we just had our first fight on August 7th at the Commerce Casino. It felt great because we sold out three weeks before the event. We launched our partnership with Fubo Sports. We show nationally in Canada and Spain. We simulcast in Spanish, too. To come out of the gate of the pandemic with a company like Fubo and how fast they’re growing and more notoriety, it was right on point.”

Part of the LXF’s challenge is not just finding fighters, but keeping them. Merriman has watched them grow, develop and become great fighters, many going on to the UFC.

“We grow a lot on talent. These guys start with us and we build them up. They want to come and fight for us. That’s what it comes down to,” he said. “They like the show we put on. They like the crowds and the environment. And the professionalism and how we put things together. We don’t even have enough room for all the fighters that want to come and fight for us. I guess it’s a good problem to have, but sometimes when these guys get really good and they get notoriety, sometimes they leave. And that’s part of the business and they go to a bigger promotion.”

Merriman doesn’t fight and has no plans to, but being around the fighters has breathed new life into him. Since retiring from the NFL in 2013, he missed the locker-room atmosphere and competing with other athletes. Being part of the LXF has allowed him to keep his competitive spirit alive, even if it’s just by training with fighters in the cage a few days a week.

“I love training with these guys. I get in there and spar a couple days a week and get work in. For me, leaving the locker room where I spent most of my life and then going out and not having that environment anymore, it’s been a pleasure for me to stay disciplined in that way,” he said.

“These guys are some of the strongest-minded people in the world. I miss all the s--t-talking in the locker room and the competitiveness and I get that when I go back in the gyms now. I try to keep up with guys who are 10, 12 years younger than me and he’s a brown belt or a black belt or he’s trying twice a day, six days a week, so you try to keep up with him. But I stay on this side. I’m a hell of a promoter so I stay on this side of the business.

Merriman was introduced to MMA in 2005 after he was drafted by the Chargers in the first round. NFL reporter Jay Glazer suggested he give it a try because of the benefits it can have for a pass rusher. After all, being an edge rusher in the NFL is all about hand technique, bending around the corner and beating the man across from you.

It’s easier said than done, and Merriman quickly saw the effect this new style of training had on him in the NFL. After doing some MMA training, he led the NFL in sacks in 2006, which he says is no coincidence. He learned to use his hands better, to open his hips and leverage blockers who were trying to keep him away from the pocket.

“When I got drafted by the Chargers in 2005, MMA started to get some legs and traction as a national sport,” he said. “Jay was like, ‘Hey, I know you box. How about you go try some MMA stuff, help you with your hands and open your hips?’ Basically, it would help me be a better pass rusher. “He didn’t have to say much more. ‘I was like OK. It can help me be a better pass rusher? Done. Where do I go?’

“The following day, I walk in the gym and it was Jay Glazer to the right and Randy Couture to the left. At that time, I thought I was going to have to spar Randy Couture. And Randy Couture is still Randy Couture at that time, at the top of his game. I’m like, ‘I’m not doing this today. That’s not happening.’ But what I found out very quickly about training with Randy was it meant everything in the world – the leverage and being able to open your hips and grapple. Using somebody else’s body weight against them. Just a lot of different things.

“The following year, I led the league in sacks. I really do think that had a big part in it. I learned how to use my hands and open my hips in ways that I didn’t do in the past.”

Merriman loves the direction LXF is heading and has high hopes – including two big fights, one on Oct. 30 at Commerce Casino and perhaps the largest in Las Vegas in November at Resort World Casino – but he’s branched out beyond sports.

During the pandemic, Merriman took on a new venture while his other jobs were halted: selling insurance. For a 6-foot-4 former NFL pass rusher, that was a tough career path to picture, but he fully bought in and has loved not only the financial stability it provides, but also the reward of helping families by providing them with the protection of life insurance.

“When the pandemic hit and everything was shut down, my TV gigs, I couldn’t go in the studio, it was shut down. The league was shut down. Most of my biggest income was just gone,” he said. “I still have a family and stuff to take care of just like everyone else, and staff and people to pay

“One of my best friends introduced me to the founder of Family First Life, this insurance company. At first, I was like, ‘I'm not selling no damn insurance.’ Not that I have a negative thing against insurance, it was like, hey I’ve got all this other stuff going on. We’re going to wait it out a few months and I’ll get back to everything else I had going on.”

“The pandemic goes on forever and I found out about this company. I got my insurance license not even thinking nothing of it. I was like, ‘I’ve got all this downtime, we’re shut down.’ So, I sat there for two weeks and I got my insurance license. I said I’ll probably never use it but I’ll have it anyway. I found out this company had the highest compensation and all this stuff in the whole entire industry. So, I really got behind it and what I found out is not only the money you can make, but there’s a side of it where you’re protecting families and stuff. And I was like, ‘Damn, I never really thought about it like that.’ You’re in a pandemic, this whole COVID situation, and you can make a lot of money, but you’re also protecting families.

“COVID got really scary, especially for the elderly and anybody with an underlying health condition. So, it’s like, why the hell wouldn’t you have life insurance? I just couldn’t see myself as like, Shawne Merriman, insurance agent. I really couldn’t see that, and then I saw the opportunity because of the high compensation but then I started looking at families really worried that something can happen to them and their families weren’t taken care of.”

Merriman has his agency with about 100 agents, and he plans for it to continue growing. He wants to have the biggest and best agency in the country and to help “as many families as we can.”

Although Merriman never saw himself selling insurance while he was tackling the best quarterbacks in the NFL, he always had a plan for life after football. With Lights Out, he’s had a clear path to success after retiring from football, and as unique as the path has been, he knew he’d have no trouble finding financial stability beyond the NFL.

“I’m a planner, but I know there are steps you’ve got to do anything,” he said. “I secured my name right and trademark. I’ve been called Lights Out since I was 16, so why wouldn’t I own my own name?” he said. “I understood the apparel industry and branding and marketing. So, I was like, I created this thing back then and I couldn’t go anywhere without people doing that damn ‘lights out’ dance. I would go to an upscale restaurant and see somebody like three or four tables over doing the motion of the dance. It was just everywhere, so I knew I created something that was brand awareness to launch what Lights Out was, which was about power and relentlessness and being bold. I knew I had something then and I just kept growing it and kept growing it.”