Page: Ranking the top 10 international stars to play in the NBA

Ranking the top 10 international stars to play in the NBA

By Stefan Bondy | Posted 25 days ago 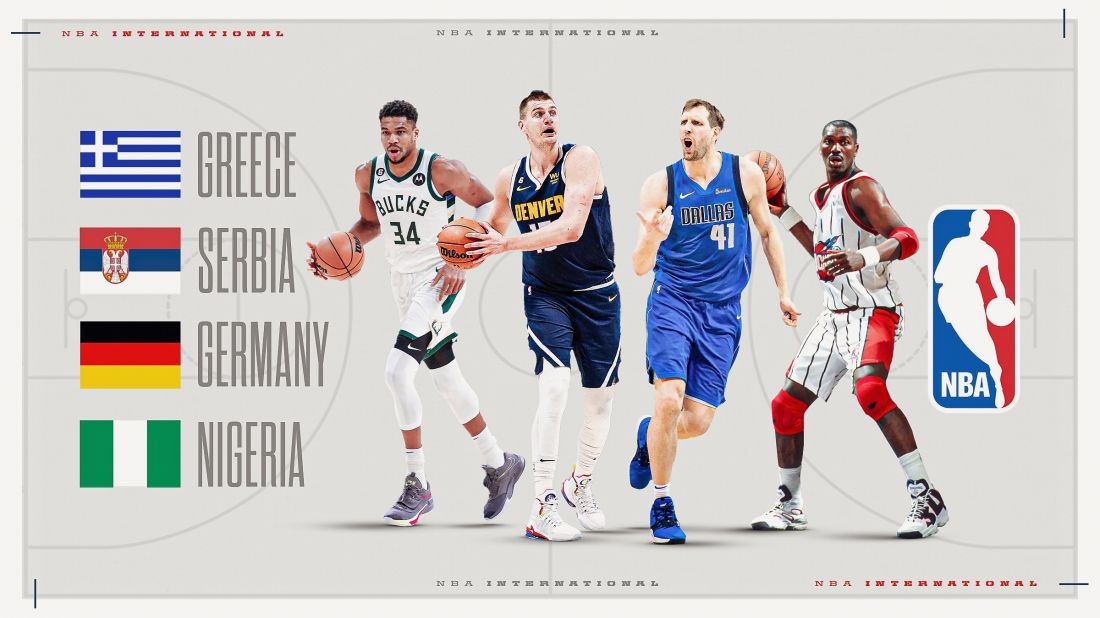 Give credit to David Stern. The late/great former NBA commissioner pushed for a globalized brand, and his vision became reality with the world’s most popular team sport after soccer.

His efforts are partly why this list –- the top-10 international NBA players of all-time –- grows more impressive and prestigious every year.

As you will read, 8 of the;top-10 played in the last decade. Four are active and in their 20s – including No. 1. You can make a compelling argument that the three top current NBA players are all international. There has truly been a global explosion.

Antetokounmpo is the Orlando Magic Shaquille O’Neal with a jumper. His brute strength and athleticism make him unstoppable in the paint, a force of nature. But he’s also limber and quick with the best transition finishing since prime LeBron James.

Antekounmpo also has the catchy nickname, The Greek Freak, which is always important for NBA superstars.

How good was ‘The Dream?’ He was drafted ahead of Michael Jordan and Rockets fans can’t complain. In a golden era for centers – with competition from David Robinson, Patrick Ewing, Shaquille O’Neal and Alonzo Mourning – Olajuwon was the cream of the crop. His smooth post moves and elite rim protection provided the Rockets two titles.

For a long time held the title as greatest European player of all-time, Nowitzki’s legendary status was solidified with his conquest of LeBron James’ Miami Heat in 2011. His signature move – the one-legged fadeaway – turned into a statue that was unveiled recently outside the Mavericks arena. He’s sixth on the NBA’s all-time scoring list and only behind the following legends: Kareem Abdul Jabbar, LeBron James, Karl Malone, Kobe Bryant and Michael Jordan.

Jokic is making a case this season for a third consecutive MVP, which was only previously accomplished by Larry Bird, Wilt Chamberlain and Bill Russell. He’s a triple-double machine and arguably the greatest passing center of all-time. The fact that Jokic can dominate with subpar athleticism is a testament to his skill, which is second-to-none for players of his size.

How does a 23-year-old make a list of all-time greats? Because Luka Doncic is that good. The Slovenian wizard recently put up the NBA’s first 60-point, 20-rebound triple-double and entered 2023 as the NBA’s hottest player. His size and skill prompted early comparisons to Larry Bird, but Doncic is even better at getting to the rim and finishing. The big things missing are rings. He just needs more help on the Mavs roster.

A tremendous run in the mid-2000s pushed Nash to fourth on the league’s all-time assist leaders. His two MVPs puts him in rarified NBA air. But Nash’s career loses some luster because of his playoff failures, which includes zero trips to the NBA Finals. He could never beat Kobe Bryant or Tony Parker. Plus, some of Nash’s stats are inflated by playing under Mike D’Antoni, who gave his point guards the keys to speedball offenses.

Neither flashy nor eager for the spotlight, Gasol was a steady inside force for a long time in the NBA and on the international stage for Spain. His arrival in L.A. in 2008 gave second life to Kobe Bryant and the Lakers, who reeled off two more titles with Gasol as the No. 2 option. He ranks 21st all-time in blocks, 28th rebounds and 40th in points scored.

Part of Gregg Popovich’s dynastic core and probably the most clutch of the bunch. When the Spurs needed a victory in the playoffs – especially during that last run in the 2010s – Parker always showed up. If the Heat didn’t pull off a miracle in Game 6 of the 2013 Finals with Ray Allen’s tying 3-pointer, Parker would have five rings and possibly two Finals MVPs.

This one is unfortunately mostly hypothetical because Petrovic died in his basketball prime during a car accident. He was just beginning to realize his NBA stardom, having earned the All-NBA selection the season prior and was offered a contract by the Nets that would make him the league’s second-highest paid shooting guard behind Michael Jordan. Petrovic had achieved star status in Europe with multiple clubs and during the 1992 Olympics, when he won a silver medal and scored 24 points on the Dream Team.

Embiid would be much higher on this list if he could stay healthy. He’s a giant with elite scoring skills but hasn’t played more than 68 games in a season since getting drafted in 2014. Still only 28, there’s time to change the narrative of his career – if only his knee allows it. When on the court, Embiid’s easily one of the NBA’s most dominant forces.