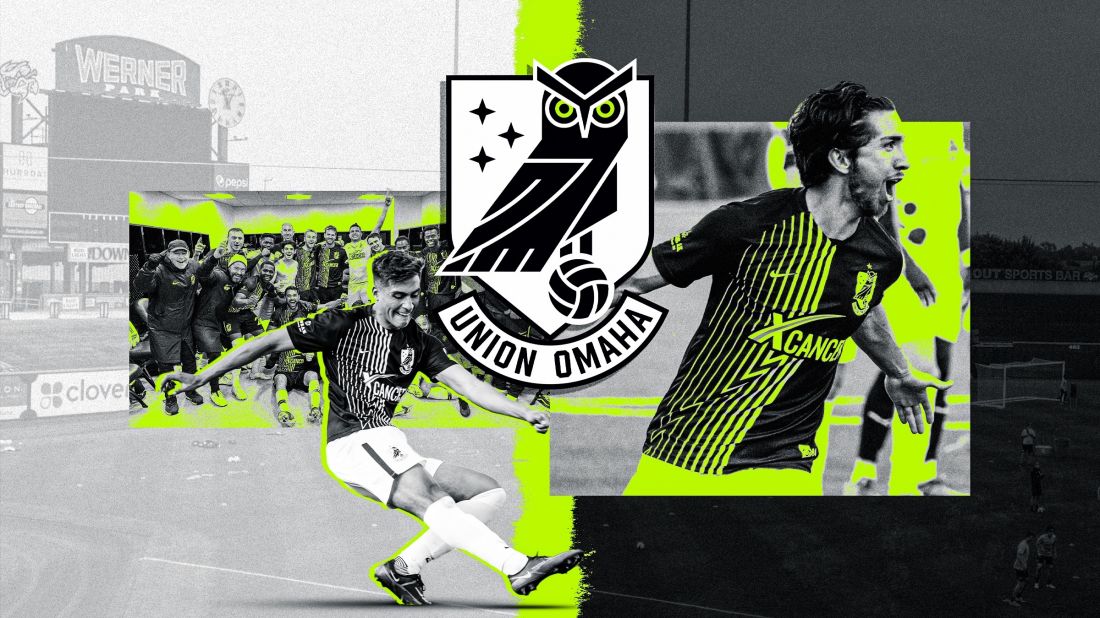 By soccer standards, Union Omaha is a toddler. And yet, the USL League One club has made giant leaps in three short years.

The Owls reached the league championship game in their first year, but the COVID-19 global pandemic canceled the final. Last year, Union Omaha were the best team in the regular season and followed that up with the league title.

This season, they’ve become giant killers, upsetting MLS clubs Chicago Fire and Minnesota United — on the road — in the Lamar Hunt U.S. Open Cup, the oldest ongoing national soccer competition in the United States, which first started during the 1913-14 season.

“[This] year we have basically a brand new team, and have all these new rookies and new people and it’s supposed to be a rebuilding year, which it still is because it's teaching all kinds of things,” Mims said, “And then to have this run we’re having in the Open Cup and success, I know we don't take it for granted. We know we're fortunate and we know it's a special run, probably won't happen again and we’re just going to ride with it.”

The competition, now in its 107th edition, involves teams from throughout the American soccer system, from amateur to MLS. For lower-level teams who successfully navigate the early rounds, it provides an opportunity to test themselves against the country’s top teams, big-budget MLS squads that have stunning stadiums and world-class training facilities.

The term used when a lower division side beats a higher division side is “Cupset.” That’s what the romantics who follow the competition want and Union Omaha has delivered in the most dramatic of ways.

They’re the only League One side still alive and join Sacramento Republic from the USL Championship as the only teams not from MLS in the quarterfinals.

Next up on June 22 is Sporting Kansas City, another MLS team, another road match. Another chance to slay another giant and keep this remarkable run alive.

The winner of the U.S. Open Cup also clinches a berth in the Concacaf Champions League, where they get to compete against the best clubs in the region. Union Omaha is three wins from doing that, Mims doesn’t dare to dream of the CCL. Not yet.

“All we’re thinking is Union Omaha-Sporting Kansas City. It’s game by game for us,” Mims said. “It's a great run that we're on. It's a special run that we're on and we know it can end any game.”

To grasp the magnitude of Union Omaha’s run is to understand a bit of the economics of the situation. When they played the Chicago Fire, the club’s midfielder, Xherdan Shaqiri, is the highest paid player in the league with $8.1 million in guaranteed compensation. Players in USL are guaranteed to make $2,700 per month.

Union Omaha’s Cupsets against two MLS teams almost never happened. The Owls needed to rally from an early deficit to beat Des Moines Menace in the second round. It was the first match of the season for a club that turned over about 75% of their roster from last year’s championship squad.

“It was the most collective win,” Mims said.

The Chicago Fire were Union Omaha’s next opponent. It meant a road trip to the Windy City and a match at iconic Soldier Field.

“We embraced it,” Mims said. “We’re taking all these trips like it could be our last one. So Chicago, we stayed downtown and stayed on the water and went to a couple local restaurants in the city and and breathed the air and just see all the diversity. It's such an incredible city.”

The Owls trailed twice on penalty kicks by Rafael Czichos, with Noe Meza leveling in the 68th minute and substitute Alex Touche dramatically tied it again on the last kick of the match. More drama ensued in the shootout, with Union Omaha missing a first attempt and needed Giovanni Montesdeoca to score to avoid elimination.

After goalkeeper Rashid Nuhu dived to his left to save the Fire’s next shot, midfielder Dion Acoff buried his PK as Union Omaha became the first USL League One side to beat an MLS team in the Open Cup.

Before playing Minnesota United, Union Omaha met fellow USL League One side Northern Colorado. With South Georgia Tormenta FC and the Richmond Kickers having already lost, the Owls and the Hailstorm were the final two USL-1 teams alive in the competition.

That meant the winner received $25,000 of prize money as the lone third division side still alive. It’s not quite the $200 million match between Nottingham Forest and Huddersfield for promotion into the English Premier League, but it’s still a significant amount of money for a team that needs every dollar.

Union Omaha claimed the $25K after a 2-0 win, with Meza opening the scoring in the first minute of the second half and Conor Doyle added an insurance goal in the 58th minute.

Another road trip against an MLS opponent followed in the Round of 16 with Union Omaha taking on Minnesota United at Allianz Field.

“While we were there it was the two-year anniversary of George Floyd and that was interesting with that and just seeing the diversity of Minneapolis,” Mims said. “We’re taking it as don't take this for granted, this is a special thing that you get to do because obviously we were one goal away before that of not having any of this experience and soccer is a funny game like that.”

Before the match was 10 minutes old, the Owls were already trailing courtesy of a 6th-minute goal by Loons designated player Adrien Hunou, who earns $2.6 million. And Emir Alihodzic cleared a ball off that line that would have put the hosts in front 2-0.

But the resilient Owls rebounded again. Hugo Kametaniequalized deep in first-half stoppage time and Joe Brito scored what proved to be the winner early in the second half.

When the final whistle sounded, Union Omaha had proved their first Cupset over an MLS opponent was no fluke. They made it 2-for-2 and booked their spot into the U.S.Open Cup quarterfinals.

The wins have put Union Omaha in the spotlight in American soccer. Everyone loves a Cupset and, as a result, the Owls have a bunch of new fans in the competition.

“We have now people calling and buying our merchandise, buying our gear, buying tickets and getting to a game,” Mims said. “I know locally we're on the map, but it's kind of put us on the map regionally, nationally, which has been great.”

Standing between Mims’ squad and a berth in the semifinals is Sporting Kansas City, a team with a rich history in the competition (they’ve won four Open Cup titles), but one that has struggled mightily during the MLS regular season.

The winner of that game takes on either the LA Galaxy or Sacramento Republic in the semifinals.

“I mean, let's be honest, all the players if they had a chance to go play for Chicago Fire or Minnesota United and they could be on their first team, that’s what they want to do. If I had a chance to go coach with Chicago or Minnesota, that's what I want to do,” Mims said. “So I think that's a neat thing to get to do it against them and say yeah we're doing it and to get another chance at that in a couple of weeks, I think it's great.”