By Steve Tsilimos | Posted 23 days ago 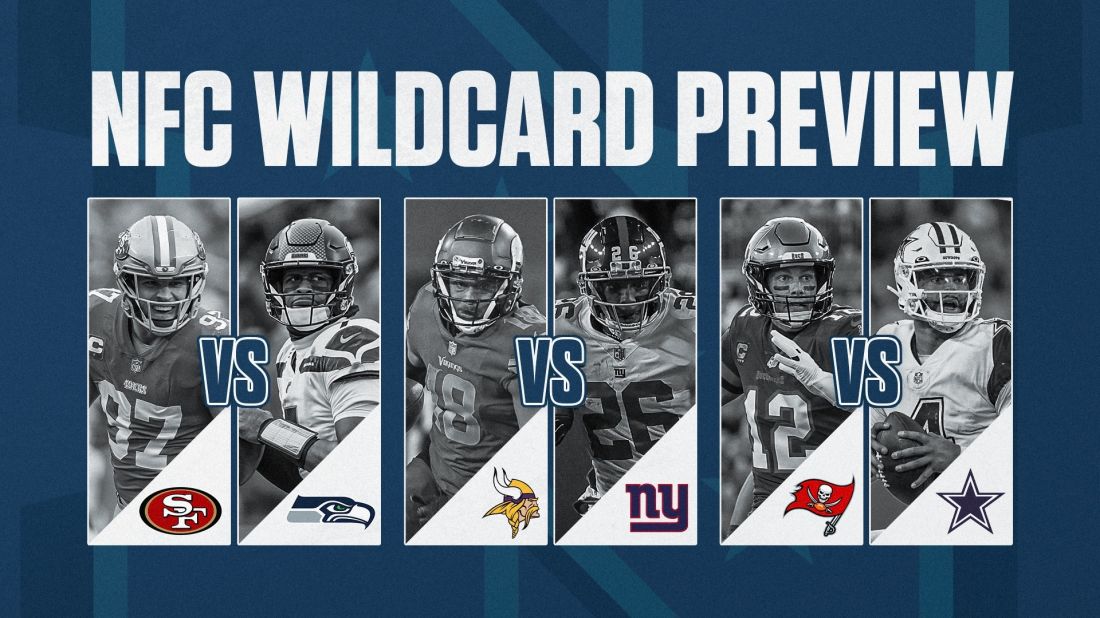 It took all 18 weeks of the regular season to cement the final standings for the NFL Playoffs. Now that the field is set, it is time to look at the matchups in the NFC that will take place this weekend. The road in the NFC to Super Bowl LVII goes through Philadelphia.

The No. 1 Philadelphia Eagles will have a chance to rest and watch the other six teams in the NFC playoffs go at each other. The stakes are high because it’s win-or-go-home for the teams competing in Super Wild-Card Weekend.

With the college football season officially over, Wild-card weekend will feature games on Saturday, Jan. 14; Sunday, Jan. 15; and Monday, Jan. 16. The NFC is featured in afternoon games on both Saturday and Sunday and will be the only game on Monday night. There are three matchups this weekend between divisional rivals, with one coming from the NFC.

The NFC Playoffs are SET 👀 pic.twitter.com/WDg9QoSqzZ

First Look: The only divisional matchup during Wild-Card weekend comes from the top two teams in the NFC West. The 49ers won the first two matchups by a combined margin of 48-20. This is no surprise because the 49ers were 6-0 in their division and have the highest point differential in the league, with a net total of 173.

The huge point differential is largely due to their No. 1-ranked defense that allowed 16.3 points per game. The best defense in the league, plus one of the most dynamic offenses, makes the 49ers the scariest team in the NFC. They are also the hottest team entering the playoffs, winning their last 10 games, five of them with rookie Brock Purdy at QB.

The Seattle Seahawks were supposed to be in rebuild mode after they traded their all-time leading passer (Russell Wilson) and let go of their all-time tackle leader (Bobby Wagner) this offseason. But people did not understand that Geno Smith was ready to be a starting QB in this league, and Pete Carroll knew exactly what he was doing. The Seahawks have a top-5 pick in this year’s draft (via Denver) and have a chance to win Super Bowl LVII. No matter what happens in the playoffs, the Seahawks were playing chess this offseason while the rest of the league was playing checkers.

Key to the Game: Running the Football

The Seahawks are 9-3 in games they have rushed for more than 75 yards and 0-5 in games they haven’t hit that mark on the ground. The 49ers are starting a rookie QB and will need to run the ball to keep the pressure off him. Who will establish the run and advance to the divisional round?

The 49ers held the Seahawks under their magic number of 75 in both games they played this season. And nothing is telling me that the Seahawks now have the keys to unlock the 49ers' rush defense.

The 49ers' midseason acquisition of All-Pro RB Christian McCaffrey has been exactly what coach Kyle Shanahanwas hoping for when the team gave up four draft picks for the Stanford grad. San Francisco will rely on McCaffrey and the ground game to carry them to a Super Bowl.

It shouldn’t be difficult in their first matchup against the Seahawks' porous rush defense. Seattle has given up the third-most rushing yards (150.2 yards per game) and will have a tough time slowing down the 49ers' multifaceted rushing attack.

If the story on the ground plays out like it did the first two times these teams met, the outcome will probably be very similar. The Seahawks have a fighting chance if RB Kenneth Walker III can break off a few long runs and wear down the defense. If the rookie RB gets bottled up, then it's going to be a long day for Geno Smith and the Seahawks.

This also will be an intriguing challenge for Brock Purdy, the 49ers’quarterback. He has gone from the last pick in the NFL draft to the starter for one of the best teams in the league.

Prediction: The 49ers control the pace of the game from the opening kickoff by dominating the LOS on both sides of the ball: 49ers, 24-9

Yes, it is mind-blowing to think the 13-win Vikings somehow were outscored, but the silver lining is that they are the “most clutch” team in the NFL. They've played 11 one-score games this season, winning each. Call it what you will, but they are a team that could not pull away from opponents because their defense couldn’t get key stops.

The Giants and their fans are stoked to be in the playoffs after five consecutive seasons with six wins or less. The G-Men are the most blue-collar team in the playoffs. Outside RB Saquon Barkley and their rushing attack, the Giants don’t do anything very well. They also are not hurting themselves or playing terribly in any facet of the game. They go to work and hope that their mediocrity will be better than their opponent.

The Giants started the season 7-2 and somehow almost didn’t make the playoffs, actually needing some horrible calls to go their way to get the win against the Commanders that clinched it for them. There is a difference between being a playoff team and looking the part. The Giants have not looked the part for the better part of the season. All that being said, the Giants lost on a last-second 61-yard field goal to the Vikings less than a month ago.

Key to the Game: Vikings Defense

The Vikings have two of the best playmakers at key positions on their offense. WR Justin Jefferson led the league in receiving, and RB Dalvin Cook has been one of the league’s elite backs for years now. There is no doubt Minnesota will put up points at home against the Giants' defense. The key to them winning is if their defense can stop the Giants rushing attack and get off the field on third downs.

The Vikings come into the playoffs with the worst defense in the tournament, giving up the second-most yards per game this season. In the Week 16 matchup with the Giants, the Vikings allowed Daniel Jones to throw for 343 yards (second-most by Jones all season). The Giants made too many mistakes in that game to win, but the Vikings cannot expect that to happen again this time around. WR Darius Slayton is a key player who could have a huge day and lead the Giants to a win.

Prediction: The Giants control the game for three-quarters but fail to hold onto the lead in another comeback from Kirk Cousins. Vikings 31, Giants 27

In case you forgot how the last Vikings-Giants game went

First Look: The 8-9 Buccaneers limped their way to an NFC South title, which granted them home-field advantage against the 12-5 Cowboys. The 8-9 record marks the first time that QB Tom Brady will finish a season with a losing record at any level of football.

QB Dak Prescott tied Houston’s Davis Mills for the most interceptions (15), and Prescott only played in 12 games. Prescott became the first QB to miss five games and lead the league in interceptions. Prescott has tossed 11 interceptions in his last seven games, which is a cause for concern for Dallas. And to make things worse, three of his picks since Week 15 have been returned for touchdowns.

These teams played in Week 1, and the Bucs' defense dominated in a 19-3 win. These teams have come a long way since then, but the Bucs will look to lean on their run defense and make Prescott beat them.

Key to the Game: Tom Brady

I expect Prescott to struggle on the road and his interception streak to continue. Even with his struggles, the Cowboys have the better roster and will be in control of the game. Then enters the GOAT in the fourth quarter. Brady is 7-0 against the Cowboys in his career and will not let that change at home in the playoffs. Vintage Brady will be too much for the Cowboys.

Brady will get enough help from his defense and special teams to give him the ball with a chance to take a lead late in this game. And as he has done so many times before, Brady will deliver. In a way, I want Dallas to win, so I don’t have to hear all off-season whose fault it is for their playoff ineptness. Coach Mike McCarthy and Dak Prescott are both overrated, and having them on the same team is going to lead to continued disappointment.

Tom Brady sets the single-season completion record for the second year in a row 😳 pic.twitter.com/6mx7NFzMFC