By Holly Cain | Posted 22 days ago 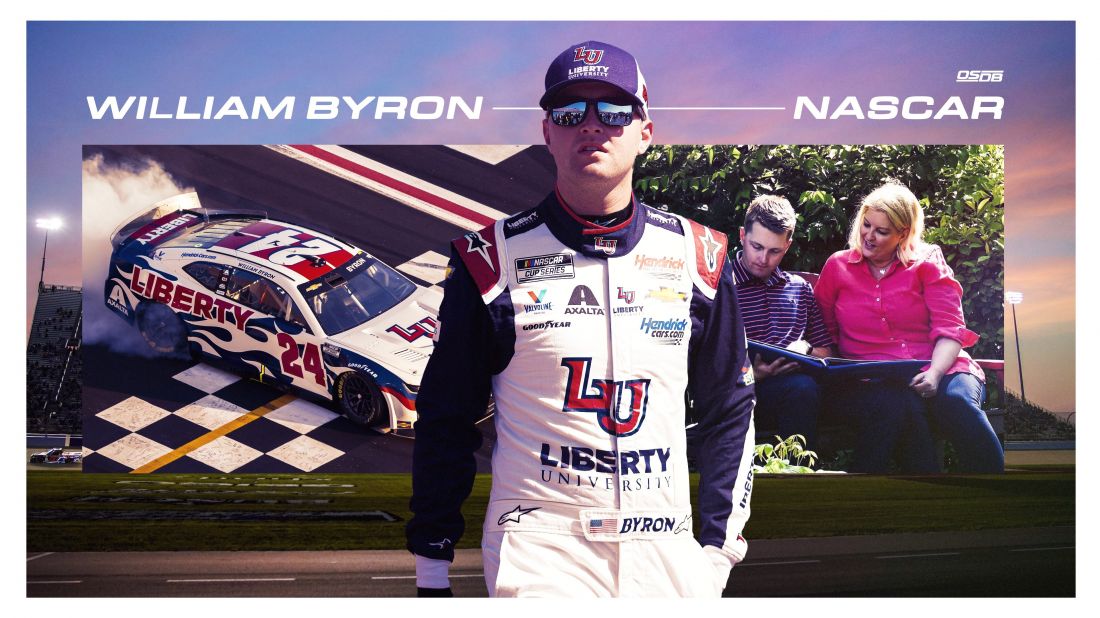 Sunday is Mother’s Day, but NASCAR Cup Series driver William Byron doesn’t need a special holiday to celebrate his mom, Dana. Every day is Mother’s Day for the Byron family, whose matriarch is recovering and persevering after a stroke and brain cancer diagnosis a year ago.

And the racing star was there as his mom “rang the bell’ on June 1, 2021 – a tradition for cancer patients to signify an end to treatment and symbolically mark the achievement of a lifetime. Not the confetti and trophies that Byron is more accustomed to after an achievement. The bell was even better.

“We went to the hospital at Levine (Cancer Institute) and I took her to a couple treatments and just being able to see the process. … you could really kind of see her get better as time went on,’’ Byron told OSDB Sports this week, noting that his mom went through brain surgery in addition to the radiation and chemotherapy treatments.

“You could see her positivity get higher and hear things from the doctor that things were going well, so it was really encouraging. Seeing her ring the bell at the end and the emotion she had in that moment was really special.”

Last month, the 24-year old Byron was able to add a sort of sentimental exclamation point on the situation for his mom – winning both the NASCAR Camping World Truck Series and NASCAR Cup Series races at the famed Martinsville (Va.) Speedway – the place where Dana suffered a stroke in 2021, leading to a cancer diagnosis in the weeks that followed.

Byron’s parents, Dana and Bill had returned to Martinsville Speedway for the rain-delayed Sunday conclusion to the race on that 2021 afternoon and were sitting below a suite at the iconic track. According to Byron, his mom’s symptoms started with arm pain but quickly got serious necessitating an ambulance ride from the track to the hospital where she was diagnosed with a stroke and ultimately brain cancer – a MALT Lymphoma tumor.

Byron wasn’t told about the initial emergency situation until after the race.

“I didn’t see them before the race because it was a rain delay and we didn’t have the normal pre-race ceremonies,’’ Byron recalled. “So, I had no idea until I got back to my bus after the race and looked at my phone and my dad had sent a message, ‘hey, call me.’ I didn’t really know what that meant.

“It definitely took me by surprise just seeing that text. Normally we catch up after the race but it’s not like urgent or anything so I thought that was definitely concerning.

“And then getting on the phone with him and hearing the details and talking about it, kind of put me in shock.”

Obviously, the ensuing months were difficult for the entire Byron family. His older sister Kathryn came down from her home in New York – and split time with William driving their mother to treatments and helping their father support her recovery at home.

“I think really we came together as a family,’’ Byron said. “Being able to visit and see her was great, but at the same time, it’s hard when they’re in the hospital and you don’t have a chance to go back to normal, per se.

“So, it was weird having that feeling of not having normalcy in our lives and not being able to just go see her at home. That was probably the hardest part because it was like, we knew she was doing okay, but you’re waiting for results. But it was also a bad feeling just knowing, she wasn’t able to do what she normally does.’’

And Byron – 22 at the time – had to learn how to navigate strong emotions while already having a job competing in a high-stress, high-danger environment. He concedes, he learned a lot during that time – taking life lessons that will help him on some level always.

“I think honestly, knowing what’s important to me,’’ Byron said of what he learned. “I had to really set my priorities. And I think I was able to compartmentalize and have a weekly life that was somewhat normal [while caring for his mom] and then know, on Sundays if everything was good leading up to that point, then she was really making sure I could focus on Sundays.”

The good medical results came that summer and months later, Byron was able to smile widely, breathedeeply and then hug his mother in Victory Lane – Martinsville’s Victory Lane.

He laughs a bit recalling that race weekend. In his excitement to win the truck race early in the weekend – a series he doesn’t compete in regularly – he said he forgot to publicly mention the significance of the victory to his family.

Fortunately for Bryon, he got another chance on a larger stage.

“No question there was definitely more motivation,’’ Byron said of his desire to win the NASCAR Cup Series race that weekend.

“I won the truck race on Friday and going into the weekend I had thought about it a little bit, how special this weekend is, the fact it’s come full circle and it’s been a year and so I thought about all that. But then when I ran the truck race, I kind of got into the moment of racing that weekend and having a lot going on.

“So, after the win I was like, ‘man, I totally forgot about saying how much this means to my family.’

“And honestly, it kind of just lined up that the Cup race went the way it did because it gave me the opportunity to kind of reflect on that and obviously, it was a really special moment for her and my dad,’’ Byron continued. “For the whole family.  It just lined up to work out the way it did because I was hoping I wouldn’t regret not saying anything after the truck win and it was good to have the win in the Cup Series – everything came full circle.’’

His mom and father were on his Hendrick Motorsports pit box for the race and television showed their emotion as the final laps closed out the victory and became the first multi-time winner in the series this season.

“This one is for my mom,’’ Byron said celebrating the win.

“Actually, it brings back good memories, because I survived,’’ Dana Byron told FOXSports in the moments after her son’s Martinsville win. “I’m here and my cancer’s gone. So, for me it’s a happy thing not a sad thing. I didn’t have any problems coming.

“We were thinking of a lot of trips, a lot of things and we said, ‘you know what, we want to come to Martinsville,’’ Bob Byron said, standing alongside his wife.

“We wanted to celebrate our anniversary here and remember all the doctors and medical staff did to help her and all the thoughts and prayers of our friends and family. We just said this is going to be our anniversary.

“And it couldn’t have turned out any better, he added with a huge smile and glance at Byron.

His son would agree.

“It was really a dream. It was amazing just to see the genuine joy and excitement that we all shared in that moment and that will always stick with me at Martinsville,’’ Byron said.

“It was different than just going out there and winning a race and being happy to win because you beat everybody. It was just a lot of gratitude and genuine joy that I think was a great family moment. It was something that will stick with you.’’