Matthew Stafford, Joe Burrow’s road to Super Bowl has not always been smooth 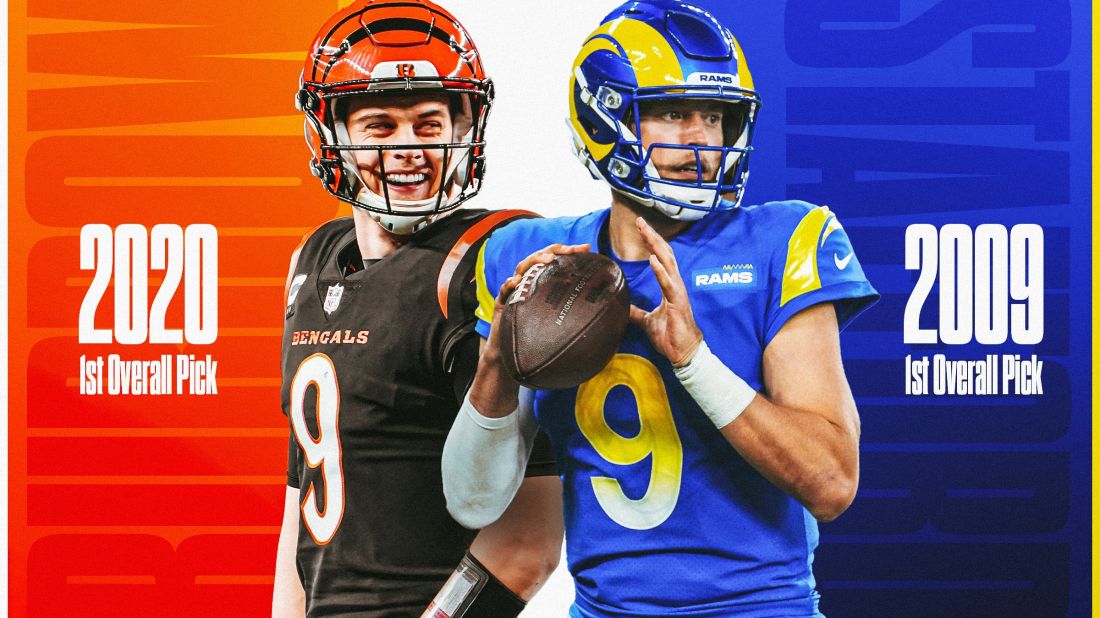 Super Bowl quarterbacks are forever linked. It goes with the arguably the most important position in sports and the biggest game on the planet.

As such, those fortunate to make the big game are often compared and put under the most intense of microscopes.

Heck, even NFL.com on its homepage had an article ranking all the quarterbacks in Super Bowl history.

And before they throw their first pass Sunday at SoFi Stadium in Super Bowl LVI, Matthew Stafford of the Los Angeles Rams and Joe Burrow of the Cincinnati Bengals will go under the same analytical breakdown as the Big Game signal callers before them.

And while arm strength, mobility and accuracy will all be debated by talking heads and pundits, one thing is certain — both quarterbacks have reached the pinnacle of their sport battling through adversity following being the No. 1 overall pick in their respective drafts.

“I think part of what makes certain people great is the adversity they had to go through,” Burrow said.

Stafford’s journey begins in Athens, Georgia, where he was the big man on campus, the star quarterback at the University of Georgia. He started as a true freshman and had an inconsistent first season, throwing TD passes and 13 picks. Stafford then finished fifth in the SEC in pass completions and sixth in passing touchdowns, leading the Bulldogs to an 11-2 record as a sophomore.

A year later, he led the conference in pass attempts and completions and was third in passing touchdowns. He elected to forgo his senior season and became the No. 1 overall selection in the 2009 NFL Draft by the Detroit Lions.

While on campus the Georgia quarterback fell in love with a cheerleader — a line practically out of a Carrie Underwood song.

The college sweethearts married in 2015 and had three daughters. However, Kelly Stafford said they had trouble conceiving at first and went the in vitro fertilization route when she became pregnant with twins Sawyer and Chandler.

But the true adversity for the All-American couple came four years later when Kelly felt dizzy and went to a doctor fearing she had vertigo. The diagnosis, it turned out, was far worse.

A benign brain tumor was discovered and at age 29 Kelly and Matthew had to deal with the diagnosis of acoustic neuroma, which could cause hearing loss.

The recommendation was immediate surgery and Kelly was on the operating table for 12 hours, agonizing for Matthew, who was given an old-school pager to receive updates from doctors as he waited in the hospital.

Football became secondary for Stafford, who just finished his 10th season as the Lions quarterback.

He spent a week with her at University of Michigan Hospital, helping her out of bed and brushing Kelly’s teeth. Matthew missed the first week of the Lions’ formal offseason program that April, and reflected on that experience when he returned to the team’s practice facility.

“Situations like this change your perspective on a lot of things,” Stafford said. “It kind of puts stuff where it should be. But it’s been good. Like I said, I’m just happy to be out here throwing the ball around to some really talented guys, having some fun, playing some ball.”

After 12 seasons in Detroit, where he was named the NFL Comeback Player of the Year, earned Pro Bowl honors in 2014 and was named to the Detroit Lions All-Time Team, Stafford was traded to the Los Angeles Rams in a transition that saw Jared Goff move to the Motor City.

It was an emotional departure for the Staffords, in part, because of the support they received during their tough times.

In Los Angeles, Stafford, who set numerous NFL passing records with the Lions, including the fastest player to reach 20,000 career passing yards and the most fourth-quarter comebacks in a season, shined in his first season. He had a career-best 67.2 passing percentage as he led the Rams to their fifth Super Bowl appearance and the first since Super Bowl LIII — a 13-3 loss to Tom Brady and the New England Patriots.

All the social attention that has swirled around the Bengals second-year quarterback has been a bit surreal. The march to the Super Bowl hasn’t been unexpected for Burrow, especially as the season went from week to week.

The career journey for the 25-year-old has been a bit rockier.

A four-star recruit out of Athens High in The Plains, Ohio, Burrow elected to stay close to home and committed to play at the Ohio State University.

He redshirted his freshman year and was the backup to J.T. Barrett for the next two years. Burrow expected to compete for the starting job the following season, but Urban Meyer elected to go with Dwayne Haskins and Burrow transferred to LSU after the 2017 season.

“Coach )Urban) Meyer, when he gets a new quarterback there as a freshman, he kind of pokes and prods them to see what they can take and if they can go and execute while he’s back there yelling at them,” Burrow said of his time in Columbus. “He wants to see if a quarterback can handle it.”

Success didn’t come right away at LSU either, but after an unremarkable first season with the Tigers, Burrow exploded in his redshirt senior season. He threw for 5,671 yards and 60 touchdowns, completing 76.3% of his passes. LSU went 15-0 and won the national championship and Burrow captured the Heisman Trophy before being selected No. 1 overall by the Cincinnati Bengals in the 2020 NFL Draft.

“I wouldn’t be the same player that I am today without those trial and tribulations that I went through there,” Borrow said. “I loved my time there and I stay in contact with a lot of people from Ohio State.”

And that’s why Burrow shouted out Paul Sparling and Nick Cosgray after booking the Bengals first Super Bowl ticket since 1988, a season that saw Burrow complete 70.4 precent of his 520 attempts for 4,611 yards and 34 touchdowns despite being sacked 51 times.

Matthew Stafford and Joe Burrow — No. 1 overall draft picks, quarterbacks, who battled back from adversity to meet in the biggest game in the sporting world.