By Holly Cain | Posted 23 days ago 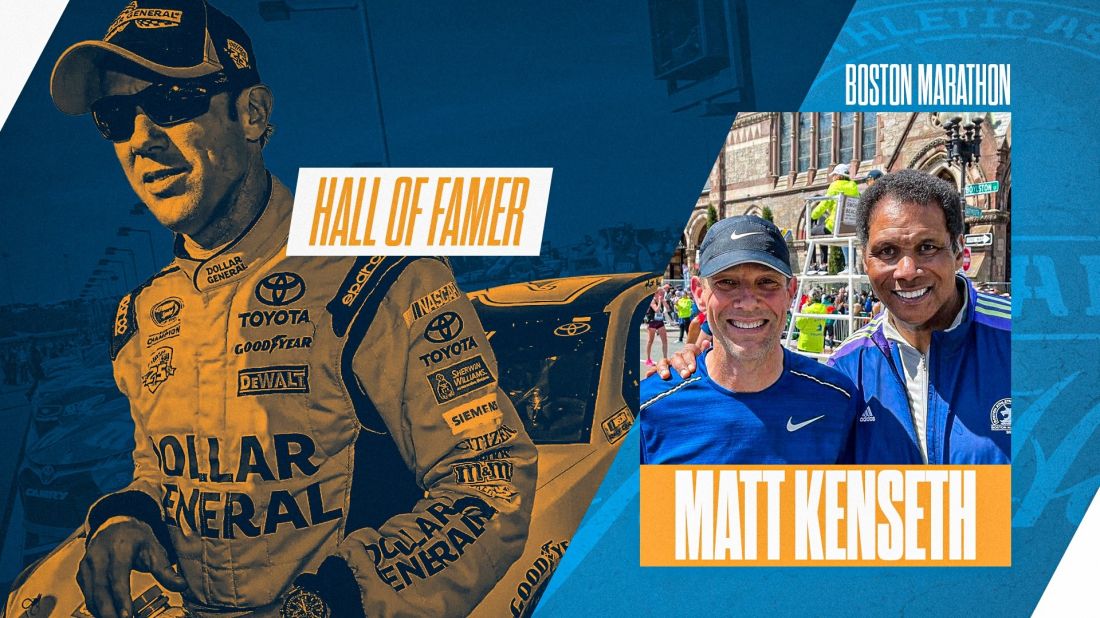 He’s a two-time Daytona 500 winner, 2003 champion of NASCAR’s premier Cup Series and as of Wednesday, a Hall of Famer, so Matt Kenseth knows a thing or two about competing in races.

But it’s his recent entry in some of the world’s most prestigious marathons that gives him his racing fix these days. And true to form, Kenseth has already shown he’s used to high expectations and big finishes.

A little more than two weeks ago, the Wisconsin-native completed his first Boston Marathon -- taking one of running’s most famous and renowned versions of the checkered flag in 3 hours, 1 minute and 40 seconds – his best effort (by nearly six minutes) in his fourth 26-mile, 385-yard race.

“I definitely felt like it was my best race,’’ Kenseth told OSDB Sports recently. “I felt good, the end of my training was good. I felt good on race day, better than I have any other race day and it was good weather and all that stuff. So, everything kind of lined up and I put together a solid race. It was fun.’’

Running has been an acquired taste for the racing superstar, who earned his first NASCAR Hall of Fame nomination in April after spending two decades – and earning 39 victories - at stock car racing’s elite level.

Kenseth laughed and acknowledged that outside of a few drivers – such as seven-time series NASCAR champion Jimmie Johnson and Kenseth’s former teammate Mark Martin – maintaining a strong fitness level was not always the norm in racing. That is changing, however, thanks in part, to these three drivers.

Kenseth’s career as a driver was stellar. He won the Daytona 500 twice, the Coca-Cola 600 and the All-Star race. He also captured the 2003 Cup Series championship capping a dominating season in which he led the points standings for the final 32 weeks of the season.

While he did bike some to keep fit, Kenseth said that he didn’t begin running seriously until about 10 years ago, in the closing seasons of his career.

And then, Kenseth said he only started running at the urging of his friend Johnson, who had organized a short race in their adopted hometown of Charlotte, N.C., to benefit a charity.

Kenseth joined his wife Katie – a longtime and avid runner – to train for Johnson’s charity race and said he immediately recognized, he had to work on his fitness.

“Katie has always run so I went out and ran with her one day and I was like I better run more than this if I’m going to run a 5K,’’ Kenseth recalled. “I don’t think I could run a mile without stopping to walk and I was in fairly good shape. So that was kind of the start of it all.’’

Johnson, who will be making his Indianapolis 500 debut later in May, said he was proud of his friend’s Boston time and the way he has taken to marathon running.

“I’m surprised in his advanced age he can go that fast,’’ the 46-year-old Johnson joked, “But I am very impressed.

“Over the last four or five years of our driving careers in NASCAR we were in a similar space where we just wanted to get out of those motorhome lots and the track infields [between time in the race car]. So, we started cycling, mountain biking and that eventually found its way into some running as well.

“We always got along well and had a lot of fun but for whatever reason late in our careers, fitness became more of a priority and also kind of a mental outlet for us and we bonded over all that stuff. I’m proud of him. He’s run a bunch of marathons now and so close to that 3-hour mark.

“To run a 3:01 at Boston, such a tough course with a head-wind the whole way too, which is crazy to even imagine. I’m super proud of him and excited that he stuck with it.’’

Part of Kenseth’s motivation for running is the time he gets with Katie – training and competing. They have four daughters – all involved with various sports - still at home and the marathon experiences have been bonding time for them.

“She ran the Berlin Marathon with me in 2019, our first marathon together, and we trained for that together, ran it and went on vacation for a week or so over there,’’ Kenseth said. “That was really fun and I really enjoyed running with her because there’s no distractions, get to spend a lot of time talking and you’re both accomplishing something together at the same time, so it’s fun

“I’ve always enjoyed running with her and still do at least twice a week. She did a lot of runs with me to get ready for this one in Boston.’’

Kenseth competed in the Berlin and New York City marathons in 2019, the Chicago Marathon last Fall and now the Boston race. He insists that though he is a famous champion racing driver he is seldom recognized in this new sporting endeavor.

“Typically throughout my career, honestly, people didn’t recognize me hardly anywhere unless it happened to be we were winning a lot or I was on some national commercials,’’ Kenseth said. “For some reason, it’s always been like that and that’s fine with me, either way.

“But it is kind of neat when they kind of recognize you when you go run those marathons and a lot of timethey [marathon trackside announcers] will acknowledge it.’’

As with racing, Kenseth allows that there is a certain competitive zeal to all this. He has made a living competing ... and winning, after all.

“For sure, you’re very competitive but obviously – the marathon term is used for a lot of things but, it is [a marathon] in this case,’’ Kenseth said with a slight laugh. “It’s mainly knowing your body, hydration, nutrition all those things so you don’t run too hard in the beginning where you’re terrible toward the end.

“But you also don’t want to run too slow at the beginning where you’re too fast at the end and you had more that you left out there. So, I think it’s that balance, trying to be in tune with yourself as much as possible, to kind of hit that sweet spot where you get the most of your 26 miles and get it done as fast as possible.’’

The Boston finish has certainly maintained the motivation and competition level for Kenseth, who is set to compete in the London Marathon this October.

“I think if you’re going to do anything, you should do it to the best of your ability,’’ Kenseth said of his new athletic outlet. “I’ve always been like that. I’m not going to skimp on my training so I can go finish but be maybe 15 minutes slower than what my potential is.