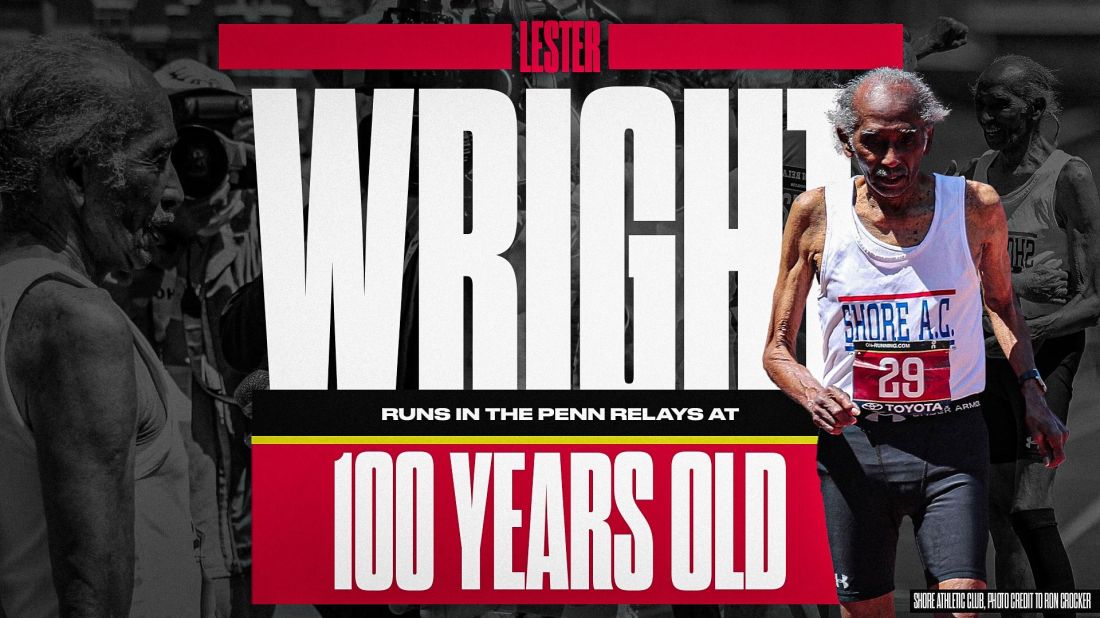 One day after blowing out the candles on his 100th birthday cake, Lester Wright laced up his running sneakers. Wright, a decorated World War II veteran, had his sights set on the 100-meter dash at the 2022 Penn Relays. The 80-and-up Masters Division race featured a competitive field, and the newborn centenarian was ready for action.

Wright made his way from his Long Branch, New Jersey home to historic Franklin Field in Philadelphia on April 30. Despite not having raced in about three years, the former oral surgeon held his own against much younger competitors. The next-oldest runner in the group was 92, and the others were all in their 80s.

Wearing a Shore Athletic Club jersey and #29, Wright placed seventh out of nine, while sprinting to a centenarian world record in the 100-meter dash.

Wright clocked in at 26.34 seconds, shattering the previous mark of 26.95 set by Californian Donald Pellman in 2015. Beating the world record by .61 seconds in such a short race was a remarkable feat, and Lester isn’t done. Wright is gunning for the record in the 200m and 400m, too.

The Shore Athletic Club is trying to coordinate these record-attempt races for Wright during the 36th Annual NJ International Meet/ National Club Championships on July 1-2.

Wright would be closer to home, competing at Monmouth University’s Joe Compagni Track. With one M100 centenarian world record secured, Wright has the opportunity to achieve a trifecta regarding 100-year-old+ short distance races.

Lester Wright is a humble and dedicated man who is no stranger to commitment or breakthrough. Wright was a track star for Long Branch High School in the 1930s, and he’s still running and competing for world records at 100 years of age. As a young man, Lester married his sweetheart Adele, and they are still writing their story 80 years later.

“She’s 98 and I’m 100,” Wright said with a twinkle in his voice. “We grew up together and have done everything together all of our lives.”

When asked if Adele has beaten him in a race, Wright said “She’s never beaten me in a foot race, but she does outwalk me.”

The only time they were away from each other was during World War II.

Wright went to Europe and fought under General Patton in the Battle of the Bulge, one of the bloodiest battles in American history. Wright earned four Bronze Battle Stars along the way, and used the GI bill to cover college upon his return.

Lester made prosthetic teeth for a living, and kept running in his spare time.

The soft-spoken centenarian credits a “strictly regimented diet” for his longevity and prowess on the track.

“As a general rule, one day I’ll eat a bowl of Cream of Wheat and then the following day I’ll have oatmeal,”Wright chuckled. “That’s been going on for as long as I can remember. Since about the age of five, I guess.”

Who knew? Let it be known that the author will be experimenting with this hybrid Breakfast of Champions going forward. Perhaps there’s something to it.

What is the secret to living a long, healthy, and fulfilling life?

“Just trying to live a good life and treating people right, taking care of family,” Wright offers. “I hope to leave a legacy with my children, grandchildren, and great grandchildren to be good people- to stay out of trouble, respect their mothers and fathers. When people respect their parents, I think they’re well on their way to living a great life.

“Also, I certainly do enjoy sports.”