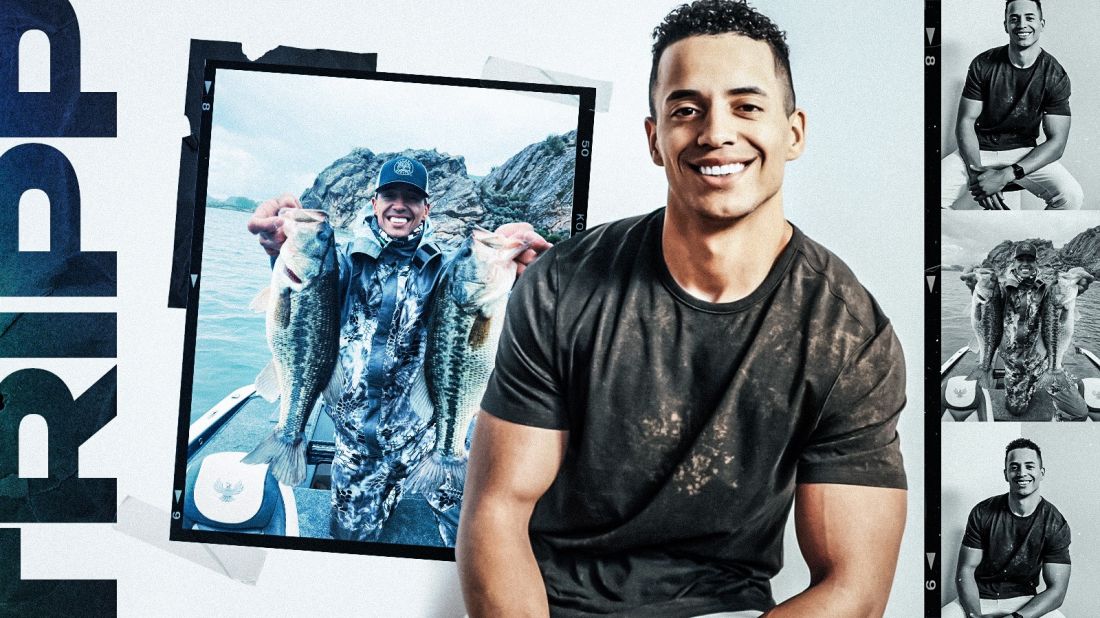 An energetic young man adorned in comfortable athletic gear offered warm greetings when our Zoom meeting began. Laj Tripp’s engaging smile popped out of the screen and into my home office. The former Pro Angler’s passion and intelligence was immediately evident. Sitting on an earthy couch flanked by trophy buck racks and vases of outdoor brush, Tripp was in his element. If Tripp couldn’t be outdoors for the interview, then this pseudo-recreation of an outdoor vibe was the next best thing.

Tripp absolutely loves The Great Outdoors, and believes that being one with nature is integral to our well-being. He caught his first bass at the age of three, under the tutelage of his grandfather. By the time Tripp was seven years old, his adoptive father Jeremy Tripp had introduced him to the world of professional bass fishing and many other outdoor adventure sports. Tripp’s dad was a mentor to Bassmaster Elite Series pro Brandon Palaniuk, and both men then helped to mold the younger Tripp.

Tripp loves snowmobiling, skiing, snowboarding, timber sledding, motocross, Endurocross, hunting, and of course fishing. Tripp also ran track and played football and basketball in high school, and it looked like he might go to a D1 school for hoops. However, he knew from a young age that he wanted to be a professional bass fisherman, and that is where his path of athletics ultimately led him.

“After looking at all of the sports that I participated in, I knew that bass fishing was the activity that I enjoyed the most and had the most opportunity to grow in.”, Tripp told OSDB Sports. “Also, it’s something that I can do until I’m 70-80 years old. Don’t get me wrong, you can definitely get injured in bass fishing. From standing all the time, and there are lots of back injuries. Running with chop water, going 80 mph on a bass boat in rough water can be really tough on your back, especially with casting. The overall longevity within the sport is undeniable though, and that was attractive. It wasn’t really about the money for me, even though you can make a lot of money in bass fishing. It was mostly about being out in nature and the potential for longevity.”

Out of high school Tripp accepted a scholarship to Eastern Washington University. During his time as a freshman at EWU, he found himself among the first (and only) group of collegiate fishermen to have the opportunity to weigh in alongside pros in a tournament. ESPN had Tripp mic’d up and he had to learn how to perform in front of an audience on the fly. Tripp won that 2015 tournament in Folsom Reservoir, CA, by thinking outside the box and targeting the rarer Largemouth Bass. He went on to win Club Sports male athlete of the year at his school, which piqued the interest of the mainstream athletes. Tripp’s successes helped to garner recognition for the sport of bass fishing in the Northwest, and he is still focused on building bridges and notoriety for his beloved fraternity of fishermen.

Tripp transferred from EWU to Florida State University so he could fish in the heart of bass fishing country. After gaining those invaluable experiences at FSU, he returned to his home state of Idaho and launched a supplement brand “Endurosport” as part of a larger plan to give back to the bass fishing community on the business side of things.

“The sport of bass fishing is still really undervalued. This is a legit sport. People aren’t just out there sitting on a Yeti cooler drinking a Coors Light, tossing out bobbers… although that’s fun, too,” Tripp mused with sincerity. “One of the reasons that bass fishing isn’t exactly on center stage yet, like baseball or football, is because a lot of the pros aren’t necessarily savvy to or interested in the PR side of the sport, the personality and exposure aspects needed to grow the sport properly.”

Tripp is using what he’s learned and who he’s met during his years in the Pro fishing circuits to connect the dots for a brighter bass fishing future.

“Bass fishing is 90% business and 10% fishing,” Tripp admitted to OSDB Sports. “It may sound strange, but it’s true, and not everyone is aware of that. For me, it’s about giving back to those who took me under their wing, the people who helped me to grow and believed in me when I was first coming up. It’s the least I can do.”

“These beautiful folks helped me with sponsorships, taught me how to pitch myself to companies, which was the single greatest growth factor for me. That’s one thing about individual sports; you don’t have contracts. Just winning money in a tournament isn’t enough. It’s all business. You have to be personable, you have to sell yourself.”

“You have to be yourself and be able to talk to anybody at any time. This is what got me out of my shell at a young age, because I had no choice. I had to cold call people asking for support, sharing my tournament experience and my media decks. It was almost like starting your own business, and the business is your personal brand. So, I’m happy to be mentoring high school and college bass fishermen today about the importance of personality and likability as a Pro Angler.”

Tripp’s own personality is on display in his podcast “The Laj Tripp Show”, where he talks with professional fisherman, fitness trainers, crossover athletes, and more. The most crossover love for bass fishing currently seems to come from the worlds of baseball, football, UFC, and golf. Atlanta Braves pitcher and recent World Series champion A.J. Minter is a big hunter and fisherman. Another of Tripp’s close friends is former big league slugger Ike Davis, who is country-spirited and loves the outdoors. Former football players have also found bass fishing to be an excellent way to continue their pro lifestyle after retirement.

Hall of Famers like WR Randy Moss and CB Deion Sanders are quite active in bass fishing circles. Moss recently hosted the 2021 Straight Bass Classic in memory of his friend and long-time sports reporter Sid Hartman.

Hartman was a journalist with the Minneapolis Star Tribune and the WCCO 830 AM radio station, and his pet name for Moss was “Genius”. Moss turned out to fish Lake Minnetonka in Hartman’s honor, along with ex-Vikings Daunte Culpepper, Robert Smith, Jake Reed, Scott Studwell, Todd Bouman, and Pete Bercich. Former Minnesota Twins Joe Mauer and Al Newman hopped onboard, as well as Minnesota Wild defenseman Matt Dumba and ex-Timberwolf/Golden Gopher John Thomas. Bouman and Studwell took first place with a catch of 14 pounds, eight ounces.

Sanders has also fished with Moss, but his most recent success on the water was when he won the Bassmaster Celebrity tournament on June 9, 2021. Sanders’ team included Sydnie Wells, James Hall, and Bassmaster Pro Greg Hackney. The group pulled in a total of 12 pounds, eight ounces, and their victory translated to a sizable charitable donation to the Tiger Fund Athletic Foundation. Other notable sports names at this event were NFL/ ESPN icon Marcus Spears and WNBA legend Sheryl Swoopes.

“Bass fishing gives professional athletes in mainstream sports another outlet to keep the competitive mindset and the pro spirit alive in a different arena,” Tripp told OSDB. “If these athletes want to continue to compete, and even start another career, it’s possible in the professional fishing circuits. Too often athletes face depression and mental health issues after they retire, but now they can tackle a new sport. This is why it’s so important to bridge the gap. It takes money to compete in bass fishing, but if these athletes have managed their money correctly they already have that, maybe along with endorsements and recognition…it won’t be hard to gain sponsorships and momentum.”

Former Vikings DE Brian Robinson is another great example. Robinson was fishing while he was still playing football, but has taken it up several notches since retiring from the NFL. Now Robinson competes in Pro Opens for Bass Masters and has a YouTube channel called “Reel ‘Em In 96,” which is dedicated to his bass fishing exploits. Tripp and Robinson are now buddies, and the connectivity between Pro Angling and the mainstream sports world is literally growing by the day.

Tripp endeavors to lift each and every person he encounters, and his ultimate goal is to help Pro Angling to achieve its maximum growth potential. In addition to bridging the gap between bass fishing and mainstream sports, Tripp is helping to improve the longevity and quality of life quotients for folks as well. He is an avid Biohacker, and is always learning new ways to optimize the human body. The Godfather of Biohacking, Dave Asprey, identified Tripp as an asset after a chance meeting. Now Tripp is a Media Executive and Brand Partnerships Manager for Asprey.

“Health and science has always been a big thing for me.”, says Tripp (who is built like Terrell Owens in his prime, trains in jiu jitsu with the Gracie family, and was once an amateur bodybuilder). ”I always wanted to be able to help people. If you get things right in all of the different quadrants of your life, physically, mentally, spiritually, emotionally…this is when you’ll thrive. That’s the great thing about Biohacking, it’s holistic. It’s not a bodybuilder’s approach. Bodybuilding taught me a lot about what not to do. You can look great on the outside, but how do you feel on the inside?”

“I just want to pass on what I’ve learned to people who are interested. I did 40 Years of Zen, which is a five-day retreat of Dave’s in Kenmore, WA, where I engaged in neurofeedback, brain mapping, pod training, cap training, HRV training (Heart Rate Variability), and meditation. It’s like a Sedona retreat on steroids, with tech.

“It’s also extremely important to eat clean, organic fruits and vegetables, grass-fed meats, and healthy fats, while avoiding sugar, grains, and processed foods. Gut health is extremely important. Give Intermittent Fasting (IF) a chance, and limit blue light, especially at night. The blue light (on phones, computer & TV screens) has the ability to disrupt your biorhythms and can really mess up the quality of your sleep. Also, be out and active in nature as often as possible. The Great Outdoors is our ultimate teacher.”