By Cameron DaSilva | Posted 6 days ago 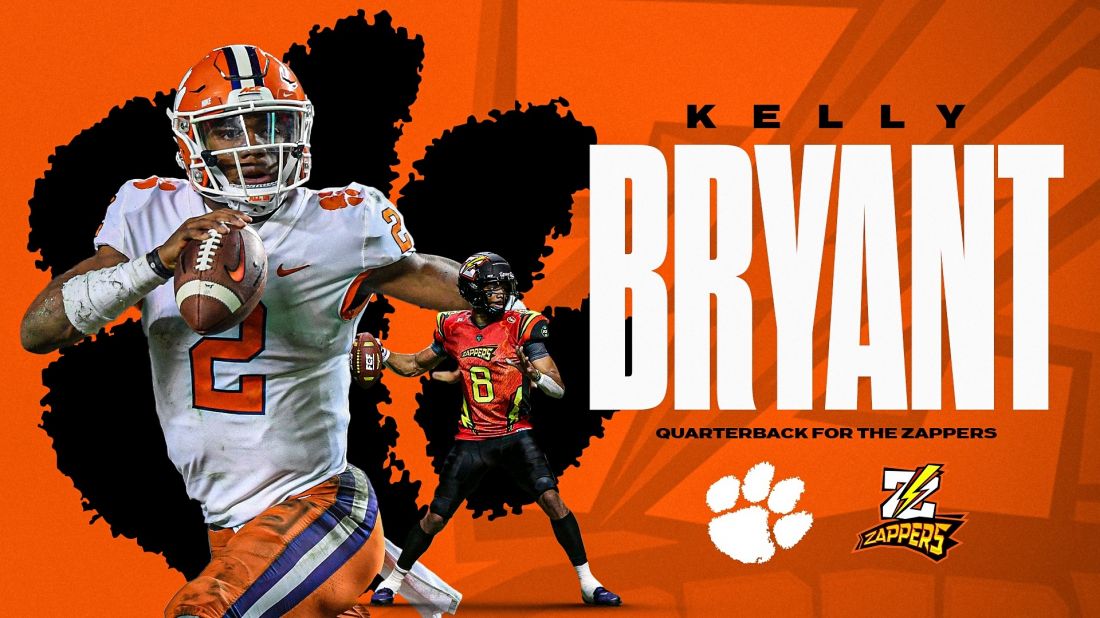 Kelly Bryant had big shoes to fill. As the starting quarterback of the defending national champion Clemson Tigers, Bryant had his work cut out when he took the reins from Deshaun Watson in 2017. He led the Tigers to a 12-2 record and the College Football Playoff, losing to Alabama in the Sugar Bowl.

Bryant threw for 2,802 yards and 13 touchdowns that year, also showcasing his athleticism with 665 yards rushing and 11 scores on the ground. Eventually, in 2018, Trevor Lawrence was handed the keys to the Tigers, becoming Clemson’s starting quarterback as a former No. 1 recruit out of Cartersville, Georgia.

Bryant’s football journey hasn’t been easy but all his hard work and patience paid off recently when he led the Zappers to a championship in the Fan Controlled Football league in the 2022 season. He was named the Gatorade Player of the Game, or Most Valuable Player, with 114 yards passing and one touchdown through the air, as well as 58 yards rushing and three more touchdowns on the ground.

He wasn’t the Zappers’ starting quarterback all season. He joined the team after they started 0-4, getting in mid-week and then starting their fifth game a few days later.

“It’s been a very unique experience. Didn’t really know what I was getting myself into,” he told OSDB Sports via phone. “Got in here mid-week on a Tuesday or Wednesday and got thrown into the fire on Saturday. Through those days, getting ready for the game, trying to get timing down with the guys, staying after practice. Doing the little stuff. I was watching film and catching up on install from previous weeks when I wasn’t there. A lot of running and ripping all over the place.”

Winning a championship at any level is difficult to do. Bryant wasn’t the starter when Clemson won the national title following the 2016 season, but he was a major part in the Zappers’ run to a championship, outscoring their final two opponents 92-48. Bryant still has aspirations of playing in the NFL and winning a Super Bowl, which is why he’s continued to hone his skills in the FCF spring league.

He was excited to participate in the FCF to get his name out there again, and there was no better way to showcase his ability than to not only play in a championship game, but win it, too.

“It was better than what I was doing when I got here,” he said with a laugh. “I was just working out at planet fitness and that’s about it. Get my name back out there, show people I still want to play and can still play at a high level regardless of what league it is. Hopefully, I put enough film out to generate a workout or something to come from this.”

The FCF isn't the only spring league that’s popped up. There’s also the XFL and USFL, as well as the now-defunct AAF. Like so many others, Bryant absolutely sees a place for these developmental leagues as players who didn’t make it in the NFL the first time around try to keep their dreams alive.

“Definitely. I feel like the leagues that are starting to appear, it’s a great opportunity for guys who maybe just need a chance to be seen or just looking for opportunity,” he said. “Being able to take advantage of it, you never know what will come out of being an FCF player or XFL, USFL. It’s good to see a lot more leagues are starting to appear and give guys chances.”

One of the added benefits of playing in the FCF is the chance to be around players who have gained NFL experience in the past. Terrell Owens played for the Zappers before getting traded to the Knights of Degen, the first trade in league history. Former Cowboys wide receiver Terrance Williams also played with the Zappers.

Bryant had the opportunity to play with both former NFL receivers, which allowed him to gather advice and insight from experienced players. That’s one of the most fulfilling parts of playing in the FCF.

“Just the relationships I’ve built here. Playing alongside guys like TO, Terrance Williams – two guys with NFL experience. Not just those guys but guys that played in the NFL. I got to meet a few players who didn’t have college experience and they’re looking like they can be out there playing with the best of them. Just getting to know people and their journey and seeing what they have going for themselves once they leave here, trying to stay in touch with the guys, it’s been a really unique and fulfilling experience.”

As for the advice he got from those former NFL players, Bryant took one major thing away from them.

“Just be ready for the opportunity. You never know. If you get an opportunity, you want to make the most of it, so live with no regrets at the end of the day,” he said.

Bryant is doing everything he can to reach the NFL. After he lost the starting job at Clemson, he transferred to Missouri, where he played one season, throwing for 2,215 yards and 15 touchdowns with another 242 yards rushing. He went undrafted in 2020 and had a tryout with the Cardinals that August, but Bryant has been working his way back to being an NFL-caliber player with stints in the CFL, Indoor Football League, and now the FCF.

“Just the journey, the route that I've been on since college,” Bryant said, referring to the toughest part about his career. “Transferring, going undrafted, not getting invited or signing, only getting one workout and nothing coming from that, going to North Dakota for arena league for two weeks – that was different. Getting called by the CFL and only being there for two weeks and coming home and not hearing anything. My whole career has been about patience, so that’s been the toughest thing I’ve learned over my career.

“But I know whenever the opportunity presents itself, I will be fortunate and thankful, and I’ll give it everything I’ve got.”

As badly as he wants a chance to prove himself in the NFL, Bryant has a backup plan if things don’t work out. He eventually wants to get into coaching, and got a taste of what that job entails when he went back to his high school, Wren High, and volunteered to help coach the football team.

“The coaching wasn’t the hard part. Being a substitute teacher was the hardest part,” he joked. “I enjoyed it. I loved it. The kids are really great and the guys on the team are like my little bros. I still keep in contact with a lot of those guys. It was a really unique experience and I'm blessed that I got to be able to go back and coach at my high school. I know that’s something something I want to get into when I'm a little older, and I'm thankful I got a little taste of it, even if it was only for a year.”

And beyond that, Bryant wants to be an athletic director someday, ideally in South Carolina.

Even if Bryant’s opportunity in the NFL doesn’t come right now, he’ll be prepared if and when it does happen. The FCF gives him the chance to stay ready, and also compete for championships in the process.